Friday Freeloading at Camping World and A Little Guatemala

Awoke several times last night, feeling a little chilly.  How can that be?  The heater’s fixed and I can hear it running; it must be me.   Finally, feeling even colder I roll out of bed at about 7 and find that the temperature is 60F!!!  What?  I check the hot water – none.  So I want to at least have some hot water to wash up before I head into CW to raise the roof.  The water heater doesn’t start up.  Oh, it must have air in the line; so I open the stovetop cover so to light a burner to clear any air out of the gas line.  Nothing!  Oh, now I understand – I’m out of propane!  Whew!  That’s a relief; I don’t have to attack the service rep at Camping World today!

So, let’s see, we’ve been here for three days since the furnace has been functioning well; all’s fine, save for the lack of propane.  I’m starting to feel like heading out - let's get back on the road.  Sounds to me like a good plan for a Friday.  So I start the whole operation of battening down the hatches and today I want to do an extra bit of washing out the black tank with that special sprayer hose; maybe I can get the black tank to register accurately when I know it’s empty.  Lacy goes out with me to observe my ‘outside the rig’ work.  I have to do a lot of outside-then-inside-then outside again; this is one of those times when I’d like a partner!  But, I take my time and just do what needs to be done.  We’re not in any big hurry.

Just about finished with all the travel preparations, including putting leashes on both cats.  Eleanor needs one like a hole in the head; but Lincoln has been known to escape without permission.  It’s easier to round him up if he’s on a leash when he gets out.

One more exterior look-about; then we’ll head right through the parking lot to fill the propane tank.  This will be my first time buying propane; the previous owner filled it for me before he delivered the rig; that and a full tank of gas for the new owner – pretty darn nice of him.

So I step out of the rig for that last inspection and Lincoln goes by me light a flash of lightening!  Off to who knows where, leash trailing behind.  I see everything’s copasetic outside; so Lacy and I go back in to the bedroom, she’ll have an extra snooze and I’ll read my book for a few minutes before I again call liberated Lincoln.  Yeah, right.  Four hours later Lincoln saunters up to the RV, leash still trailing behind, decorated with 200 burrs from the nearby pasture.

I go plug the electricity back in and will use the electric heater tonight; then try the whole thing over again tomorrow.  Lincoln will play h**l trying to escape next time!

Haven’t taken photos for a couple of days so how about seeing some pix from my Guatemala sojourn …. I have about 8,000 of them!  Here are a few …. 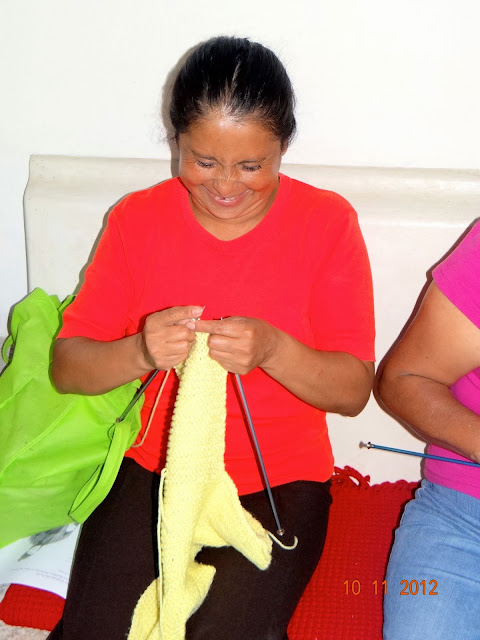 I've mentioned that I taught knitting and crocheting.  Most of the classes were in crocheting; but after several months a few ladies asked if I would teach them to knit; so we started an additional class, at my house, for a few who really wanted to learn.  Above is lovely Liliana, a single mom and grandmother, who always has a smile on her face - and a kind word for everybody.  She's knitting a yellow sweater for her granddaughter. 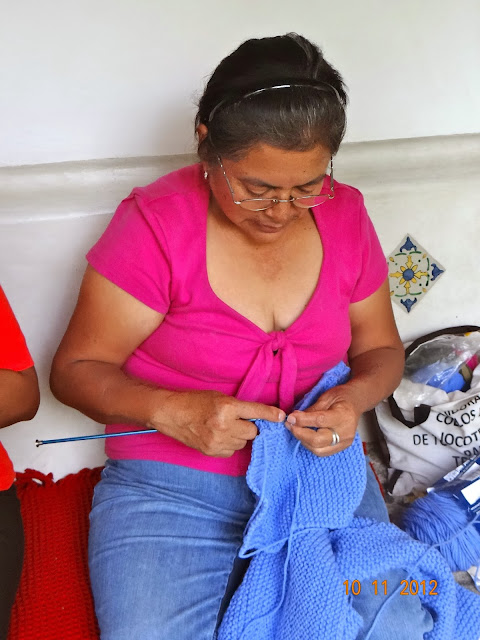 This is Rosaura; here she's also knitting a sweater for a granddaughter.  The psychologist at one of the foundation schools called me asking if I would go to talk with him about possibly teaching some classes to a group of women.  When I spoke with him, he shared that Rosaura had had a terrible happening in her family where she lost a son.  He wanted to have some way for her to get together with other women, where she might be able to heal by association with a group.  I said I'd love help but I wasn't sure about my language abilities - speaking Spanish is one thing; speaking Spanish knitting and crocheting is another.  With the help of a teacher from my language school, who knows how to crochet,  we were able to put a 'craft' vocabulary together  and off we went. 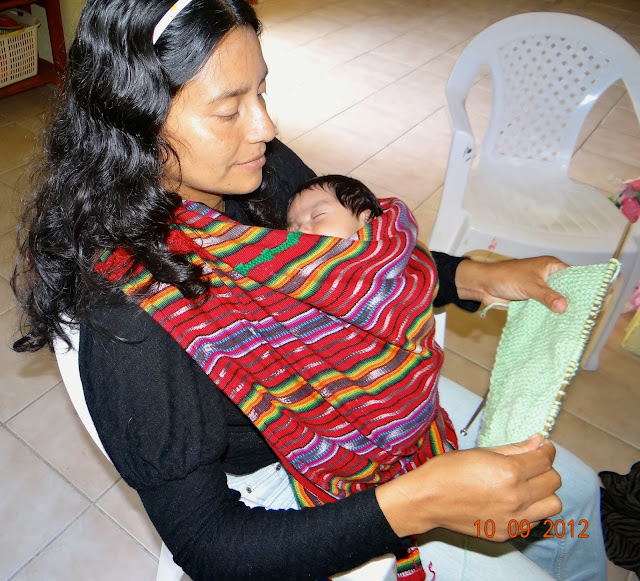 This is Ingrid, a young mother of a six year old girl, a three year old boy and we all celebrated the birth of her new baby boy in late September 2012.  She's a beautiful woman and a wonderful mother.  She and her husband have purchased land to build a house, but there's no water there - yet.  Not all houses have electricity and many have no water either.
After the baby was born our group gave Ingrid a 'baby party' with cake, fruit punch and presents 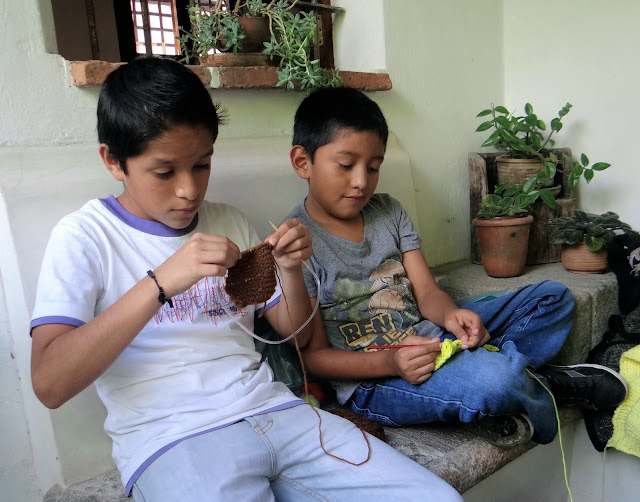 Rosaura brought her son and her grandson to the knitting class one day.  They asked me if I could teach them to knit.  Here they are after about an hour.  Guatemalans are very dextrous.  Some of the ladies cannot read, which is common, but they can remember everything they're taught.  It's incredible

Also, shortly before I came back to the States, my darling granddaughter, Holland, came to visit and we had a ball.  I had no car the entire time I was there; my main modes of transportation were my two feet and the ever-present tuk-tuks.  Holland wanted a shot of her as chauffeur so the driver took this pic 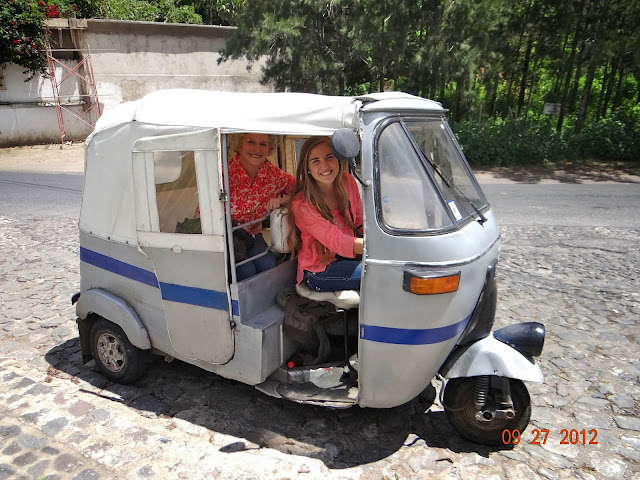 I had originally gone to Guatemala to check out a hospital for mal-nourished infants and children.  I intended to learn to speak Spanish and then volunteer in Casa Jackson, the hospital I had seen on 60 Minutes in 2011

While Holland was with me I took her to the hospital; she thoroughly enjoyed her volunteer day playing with the patients 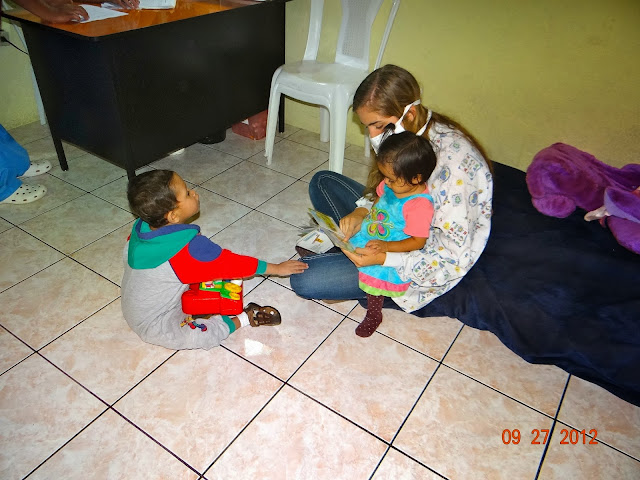 We all wear masks while working in the hospital.  These babies and children have very retarded immune systems.  And, they certain don't have immunity to possible bugs from outside Guatemala.
The patients' parents get to the hospital any number of ways, mostly through word of mouth.  They sometimes walk long long distances to ask for help.  The average length of stay is about 6 months; some stays are shorter, some considerably longer.

The little boy in the picture above, as well as the picture below, has been at the hospital for a year (at the time of these photos).  You'll notice that he's missing his front teeth.  That's because he's 7 years old!  The patients are hospitalized until they attain the 90th percentile for their age; or, on rare occasions, if the growth will be permanently stunted, a decision is made regarding how the child can be cared for in the home. 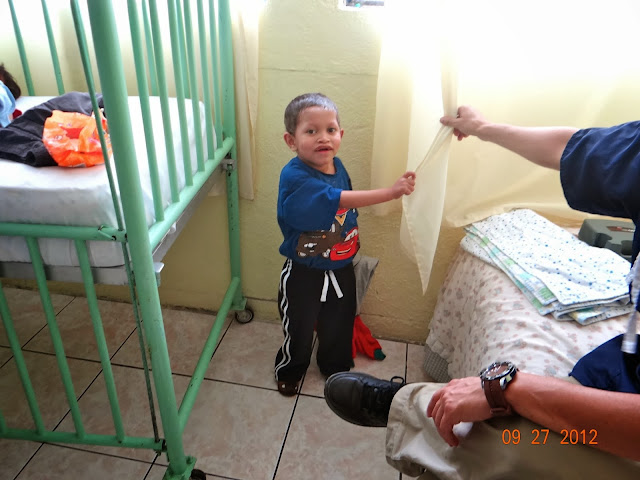 The adult hand you see belongs to a dentist from Tennessee, who, with his wife and two teenage kids, took a sabbatical from his practice and their high school to spend 7 months in Guatemala volunteering at this hospital three days a week.  A wonderful family.

I have so many wonderful memories and photos of my 18 months in Antigua, Guatemala.  If you like them, I'll share more from time to time.  If you're interested in this Foundation, here's a link:
The God Child's Project
It's a Foundation out of Bismarck, North Dakota.

My blog:  BUTTERFLIES AND HEART SONGS ....  Butterflies (because they're FREE) and Heart Songs (because that's how my heart feels when I am with these people)