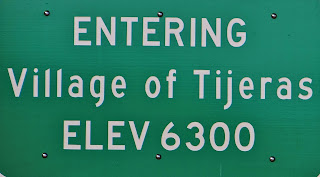 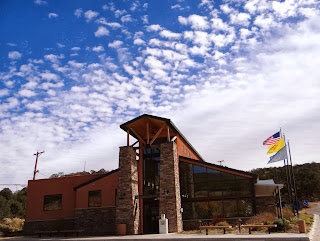 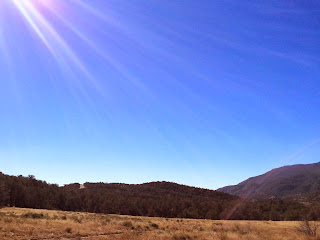 Tijeras is the village where Leisure Mountain RV Park is located.  I just called the office to tell them I’d like to stay another two days – that’ll make a week on Passport America discount.  Not bad.

When Lacy was 'shipped' in a crate from Sacramento to Guatemala almost two years ago, she was 'trapped' in her crate for almost 24 hours before I was able to cut through the red tape at the understaffed, under-modernized (no phones, computers, etc.) to take possession of her.  She was crated at about 9pm in Sacramento and I wasnt' able to get her out of the crate until almost 10pm the next day!  It started a horrible anxiety / panic attack situation for Lacy that we're still trying to conquer.  She becomes totally frantic when closed into a space (e.g. house, RV, car), with me on the outside!

I’ve recently discovered a calming agent for her panic when I leave her in the RV.   I've begun buying  soup-type bones (it irritates me to have to ‘buy’ bones) for Lacy to get in some good anti-plaque gnawing and, of course, she loves them.  I've discovered that if I present her with a bone just as I’m leaving and locking the RV, she's so busy with  chewing that she only looks up long enough to see what I’m doing, then resumes her chewing without any panic.

I really don’t like to associate behavior with treats, but this is a work in progress.  For instance, if I leave her in Petunia while I head into a store that doesn’t allow dogs, she completely panics and barks ferociously, actually snarling with her teeth bared. However, if I leave a car door open, as I often do when I jump out of Petunia to snap a photo, she sits and watches with no anxiety reaction at all.  I've even tried leaving a door open when I’m running into a shop for just a minute and I can see the car through a window.  She has no issue with that and sits watching me very calmly.  As I said, this is a work in progress; hopefully it'll be completely resolved one day.

Friday tourist activities ...
Thursday, the 31st, I didn’t drive into Albuquerque, as I'd said I planned, because the wind gusts were so strong, I thought my little car would be lifted right off the freeway to become “Flying Petunia,” an entertaining image, but not fun for me!  So Petunia and I made that 25-mile trip yesterday to visit Albuquerque Old Town and the Rattlesnake Museum. 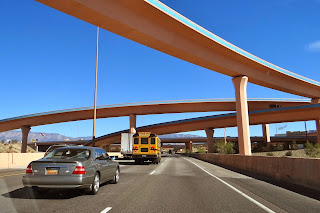 I got to Old Town in northwestern Albuquerque at just about noon and decided to treat myself to a New Mexico lunch at La Hacienda del Rio.  I’m pretty well convinced that the best examples of local cuisine are not in the tourist areas; there are some exceptions, but not many!  I ordered the combination plate that included a chili relleño, beef taco, shredded beef tamale, cheese enchilada, rice and beans.  It was good, not exceptional.  The restaurant is located right on the Old Town Central Square and is attractive on the outside, as well as nicely decorated with Navajo / Southwestern décor throughout the inside, including a large gift-shop area one has to walk through on the  way into and out of the dining room. 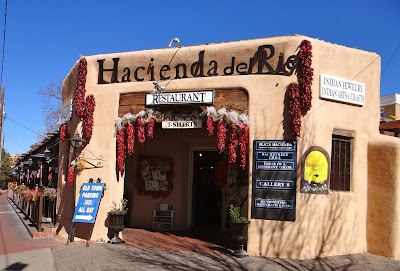 Inside restaurant - lots of baskets and pottery, etc. 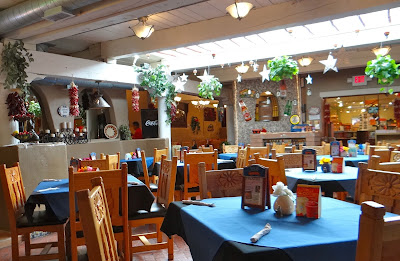 After lunch, I decided to head to the Rattlesnake Museum and found it closed!  There was a note on the door to the effect that there was a “family emergency – closed 10/27 – 11/5;” I think that’ll completely leave me out for this go-around in New Mexico.  Drat! 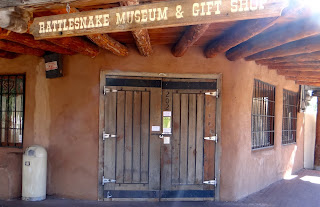 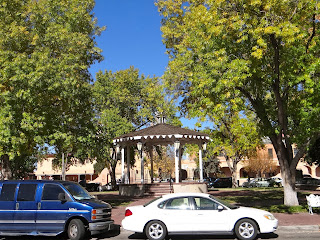 Trees deciding whether to change colors - or not 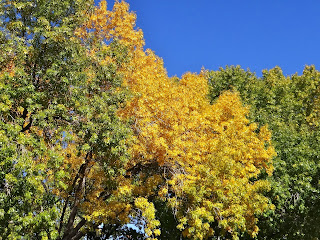 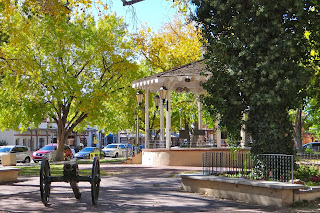 Church on the square - continuously in use for over 200 years 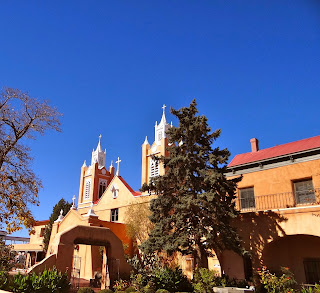 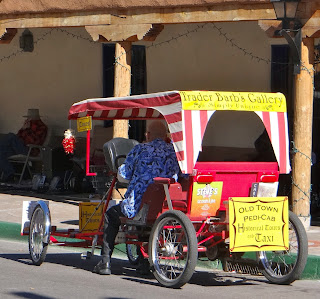 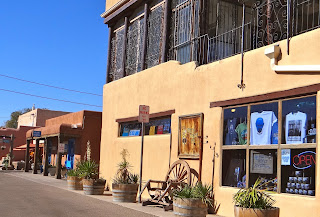 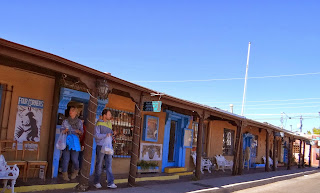 The day was clear and bright, but chilly; never over about 49F.  I wandered around the square with it's cottonwood trees trying to decide whether to completely change color or pretend it's still Summer.  I stopped and listened to an Ecuadorean gentleman playing the pan-flute; and purchased one of his CDs, as I love the soft, sometimes melancholy sound.  The music brought back memories of El Parque Central [Central Park] in Antigua, Guatemala, where I listened to the same type of music by another South American musical group whose members had relocated to Guatemala.  Yesterday's music also reminded me of Cuzco, Perú and the Andes where this music originated.  In between his tunes we got into a conversation about his wonderful country and my experiences there.  And, we spoke in Spanish.  I found out quickly that I'm a little rusty!

Then, I sauntered through some art galleries and a small New Mexican bookstore.  I was included in a nice ‘local’ conversation with two ladies and the bookstore owner about New Mexico authors; they were raving about Tony Hillerman whom I’d never read.  So I took advice from the ‘experts’ and bought a paperback, People of Darkness.  Tony Hillerman was a life-long resident of Albuquerque who died in 2008 after having written 30 + novels, mostly about southwestern life and culture.  I began reading my first Hillerman novel last night; the protagonist is a Sergeant for the Navajo Tribal Police, Jim Chee.  I’ve only read about 30 pages – no final opinion, yet.

Today, as I've been doing a lot of this week, I'm working on Excel spreadsheets for monitoring my relatively new liife-style Budget, full-time RV-ing, at least for the next couple of years.  As everything in life, it's a work in progress, and October's unusual expenses were very high, what with Floribunda furnace repairs and Petunia body repair.  Yikes!

That's all for now. Happy Saturday and ...