Betty's RV Park and a Visit to New Iberia, Louisiana

Thanks to the suggestion of one of my blog followers I arrived at Betty's RV Park on Tuesday afternoon, just in time to get Floribunda settled and hooked up and get myself to the daily happy hour.  Betty's is small (about 16 sites with a few extra spots for boon-dockers), not fancy, but oh so nice and comfortable with lots of southern hospitality.  Most of the campers are return visitors, some who've been coming to Betty's RV Park for years - we hail from all corners of the US and Canada.  In the three days I've been here I've been able to connect with two couples who are friends of friends - you know how that goes.  We're a big-small group and it's especially fun to connect with virtual friends and friends of virtual friends.

Even before I arrived I received a couple of emails from Betty regarding activities she wanted to make sure I knew of.  The first was a caroling party to three different assisted living facilities, which we did today.  But I'm getting ahead of myself.

At that first happy hour I was introduced to the whole group who welcomed me with open arms.  I was even invited to go out for lunch and a little touring in New Iberia, a town not far from here.  So, yesterday a group of us piled in several cars and headed to Victor's, a cafeteria-style restaurant that's famous throughout this area. 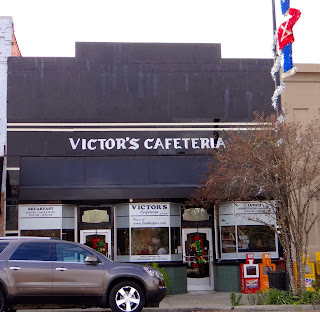 As I said, it's a cafeteria.  Here're some of the crew who obviously love their jobs 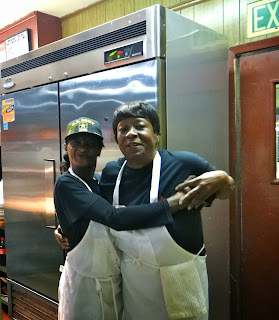 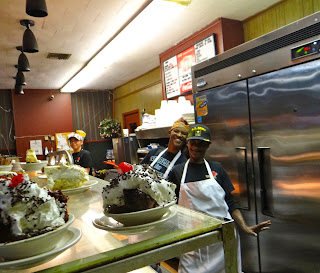 Just take a look at those desserts!  They're all made on the premises each
morning, beginning at 4:30.  Not in the photo is the most scrumptious apple pie
I've ever eaten.  The crust was tender and flaky, the cinnamon-apple filling cooked just
right, and topped with home made caramel sauce and chopped pecans.
I heard the coconut cream pie was to die for but I was too involved with my apple pie 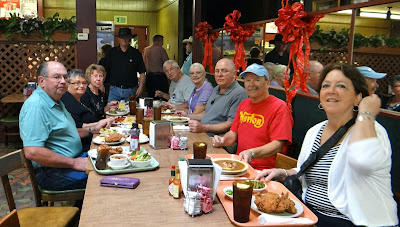 Here's the lunch gang.  Most of us had either fried chicken, mashed potatoes and gravy
with various side dishes; or, some had chicken gumbo with red beans and rice.
Delicious is all I can say!

After lunch we hopped in the cars and headed to the Shadows on the Teche, an ante-bellum mansion located on Teche Bayou.  What is the Teche Bayou?  First of all, simply put, a bayou is a body of water usually found in flat, low-lying areas, and can refer to either a slow-moving stream or river, or a marshy lake or wetland.  According to wikipedia:  the Bayou Teche  is a 125-mile-long waterway of great cultural significance in south central Louisiana.  It was the Mississippi River's main course when it developed a delta about 2,800 to 4,500 years ago.  Through a natural process known as deltaic switching, the river's deposits of silt and sediment cause the Mississippi to change its course every thousand years or so. 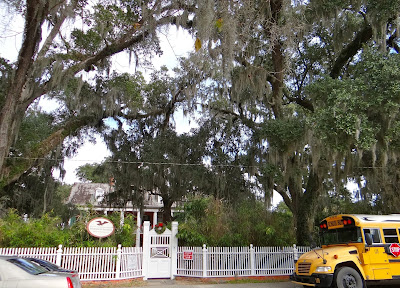 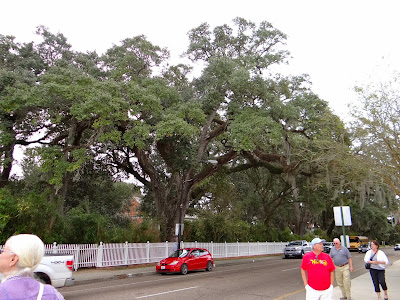 Part of the group ready for the tour.  Unfortunately they don't allow photos of the interior of
the mansion; most of the furniture and art work is the original 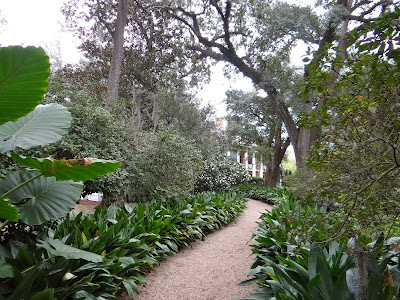 This is the entry walk bordered by its magnificent greenery 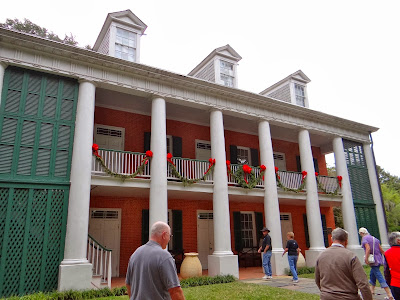 Although, most ante-bellum homes were built to face the bayou, the front of the Shadows
faces the street 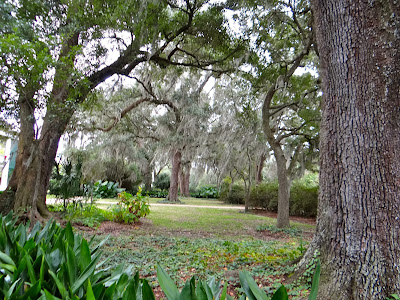 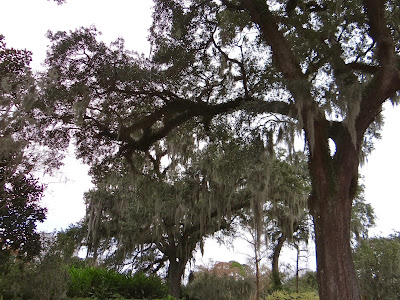 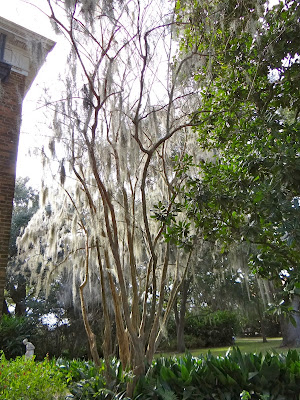 I'm not sure what this bush/tree is; it's obviously deciduous, but the moss
covers the branches like Winter leaves 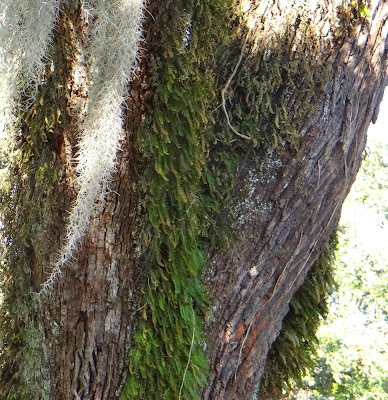 The southern live oak (Quercus virginiana) also supports the resurrection fern .  The guide explained that as the weather dries because of no rain for a period of time, the
resurrection fern dries up; then 'resurrects' itself as soon as the next rainfall occurs.
Depending on growing conditions the southern live oak can vary from a shrub-size to a giant and spreading tree-size.  A typical tree can reach 60 feet in height with a spread of nearly 80 feet.  Often the lower limbs branch out from the trunk and sweep down towards the ground before curving up again.  The limbs can also grow at very severe angles.  I'm fascinated by the majesty of this beautiful tree that is literally seen on almost every street.  The live oak trees at the Shadows are between
150 and 200 years old 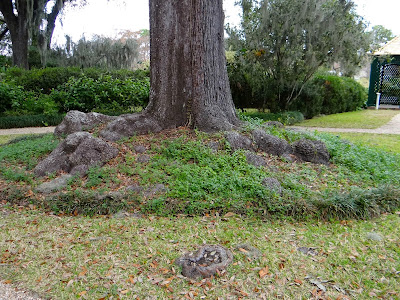 Of course, as with any spreading tree, the root spread equals, or surpasses, the spread of the limbs. 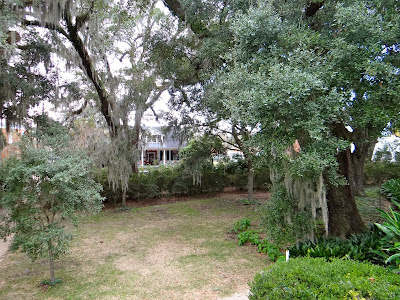 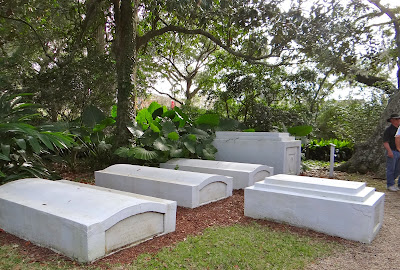 As was the custom for many southern plantations in the ante-bellum period, the family cemetery is
on the grounds of the mansion 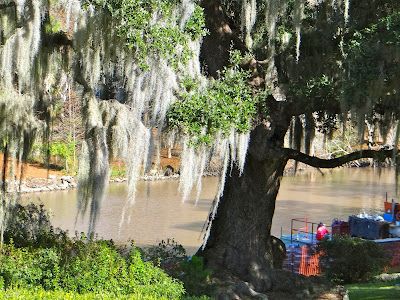 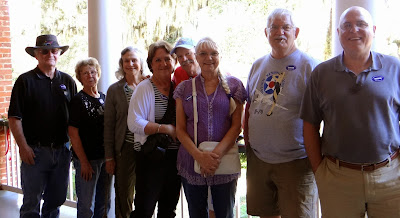 Since I don't have their permission I won't list the names of the 'gang,' but the man on the right is a gentleman who is an Acadian and knows lots about the area.  Fun for us to have our own guide. 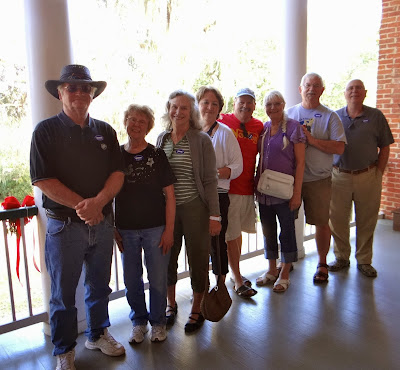 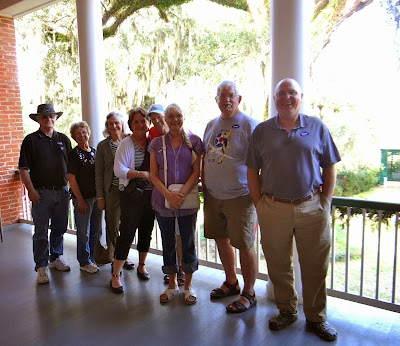 This is the lovely house across the street, decked out in its holiday finest 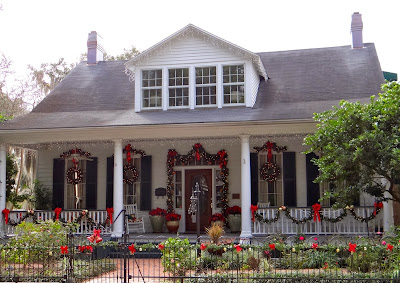