It's Christmas Eve in Cajun Country

The area of Louisiana, now known as Acadiana, is made up of 22 parishes (that's Cajun for Counties).  It forms a triangle from Lake Charles at the west to Grand Isle at the east.  The Acadians were the largest group to settle in this area from 1765 to 1785; although many other cultures and nationalities settled here, the Acadian culture has become dominant.  It contains bits and pieces of the other nationalities' cultures and has become known as Cajun . . . a derivation of the word Acadian. 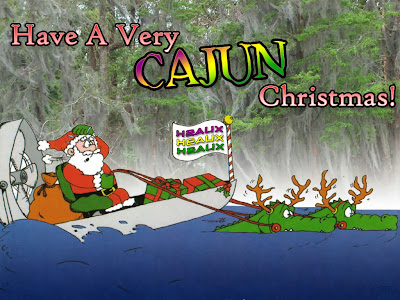 Many of us know the legend of the candy cane and about Rudolph guiding Santa's sleigh, but there are some other Christmas traditions that are not very well known; and these are the Cajun Christmas traditions of Louisiana. Cajuns, or people of French Canadian descent who have settled here, came to the state in the 1700s, according to the University of Wisconsin, and with them brought these traditions that Louisianans now hold so deep to their hearts.
* In Louisiana, Santa Claus is called Papa Noel.
* Every year bonfires are lit on the Mississippi River levees to light the way for him. 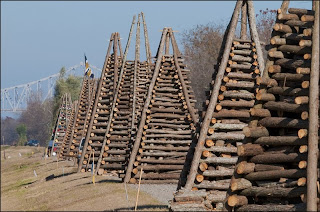 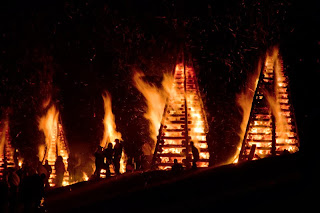 * The bonfires are believed to have been started two hundred years ago by Catholic priests, who wanted to light the waterways for people to visit their families and friends at Christmas and to find their way to church for midnight mass on Christmas Eve . . .
* According to The New York Times, there is some argument on whether they were originally lit to guide churchgoers to midnight mass or if they were really for Papa Noel.
* The bonfires are lit at 7 P.M. on Christmas Eve so that Papa Noel can find his way to all of the houses in Louisiana throughout the night.
* In some parts of Cajun country, Papa Noel takes a different persona on altogether, and is called Cajun Papa Noel.
* Cajun Papa Noel doesn't have eight reindeer; he has eight Alligators that guide his river boat. 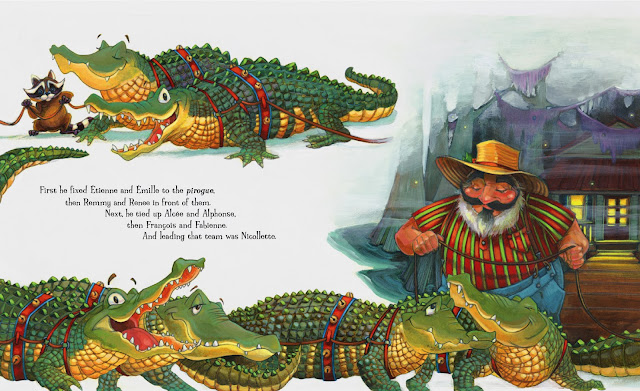 * Instead of Rudolph with his red glowing nose to guide Santa while he delivers presents, there is Nicolette, the alligator who has glowing green eyes to guide Papa Noel.
* There is also the Yule Log Cake that many Louisiana families eat on Christmas Eve. The Yule Log Cake or the Buche de Noel came from a French chef, according to The Cake Bible, who instead of carrying on the tradition of burning a Yule Log on Christmas Eve decided that he would come up with a pastry to carry on the tradition instead.
Every year I've tried to have a special session with my grandchildren.  Las year we each made a
Buche de Noel.  it was quite a project but one we won't easily forget.
Some Yule Logs . . . 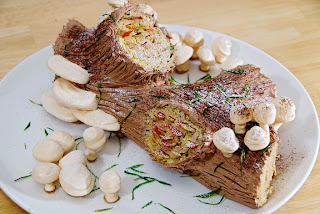 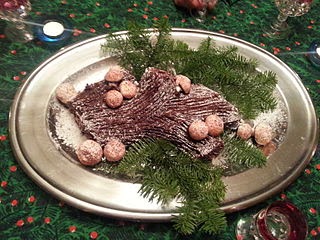 * While many people know about Louisiana's Mardi Gras tradition, few know that the beginning of Mardi gras, or Twelfth night, which is twelve days after Christmas, is the end of the Christmas celebrations here, according to America's Byways.
* On twelfth night, Louisianans have King Cake. The King Cake is a cake that has a figurine of baby Jesus baked into it. Whoever gets the baby Jesus gets to buy the King Cake next year. 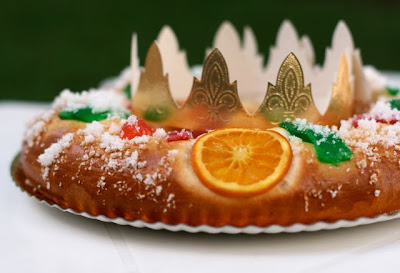 * In New Orleans and with some Cajun families, the Reveillon dinners which originated in France and mean awakening, according to FrenchQuarter.com still are made.  (I participated in a Reveillon Dinner on Christmas Eve in Provence, France when I lived there.  The dinner was comprised of 13 courses, each served on a clean tablecloth - 13 tablecloths, one on top of the next, and 13 desserts.  The use of '13' represents Jesus and His 12 Apostles.) 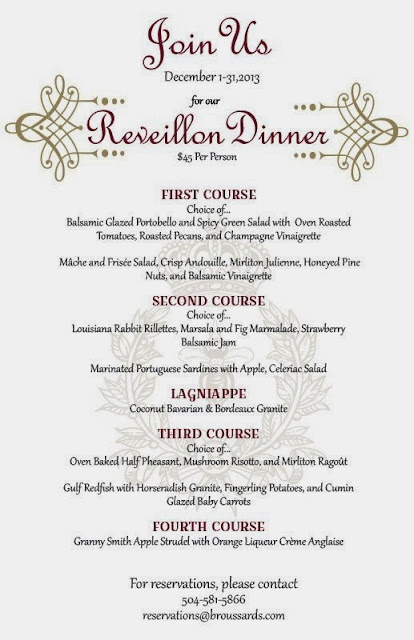 A menu from Broussards Restaurant

* These dinners were originally made to eat on Christmas Eve after families came back from midnight mass, but now the Reveillon dinners are special menus that are prepared on every night during the holiday season at restaurants throughout New Orleans and Louisiana.