Accordions to Food to Beignets

I was excited for the planned visit this morning to the Martin Accordion Factory and Museum in Lafayette.  Betty (of Betty’s RV Park) had made the arrangements with the Martin family for a fairly large group of us to visit at 9:30 on this sunny Saturday morning.

But, before I share our wonderful visit I need to say a few words about the thunder and lightning storm we had last night – all night long.  Wow!  It was really something.  I started to hear some faint rumbling of thunder about 9 o’clock last evening.  It seemed like nothing very exciting.  It had been breezy pretty much all day and maybe picked up a little as it became dark.  Well, let me tell you the thunder and lightning ‘show’ was mighty impressive and continued in spurts all night long.  Of course, it rained also, kind of in spurts that seemed like inches of rain falling in really short periods of time, letting up for a spell and then starting over again.  I have no idea what the actual rainfall was but I’d bet it was several inches total.   When I took Lacy out for her walk this morning a lot of the area here in the RV Park looked like swamp land.  It was an amazing display of Louisiana weather.  Poor Lacy had only recently calmed down from the fireworks of the holiday season; last night she went back into shaking mode.  A couple of times I thought some of that lightning was going to “light up my life,” inside Floribunda!  Sleep was interrupted many times during this night.

We met this morning and made decisions as to who would drive whom to Lafayette.  I hopped on board Wayne and Sharon’s truck, along with Marvin and the four of us set out about 8:45 for our 9:30 appointment at Martin’s. 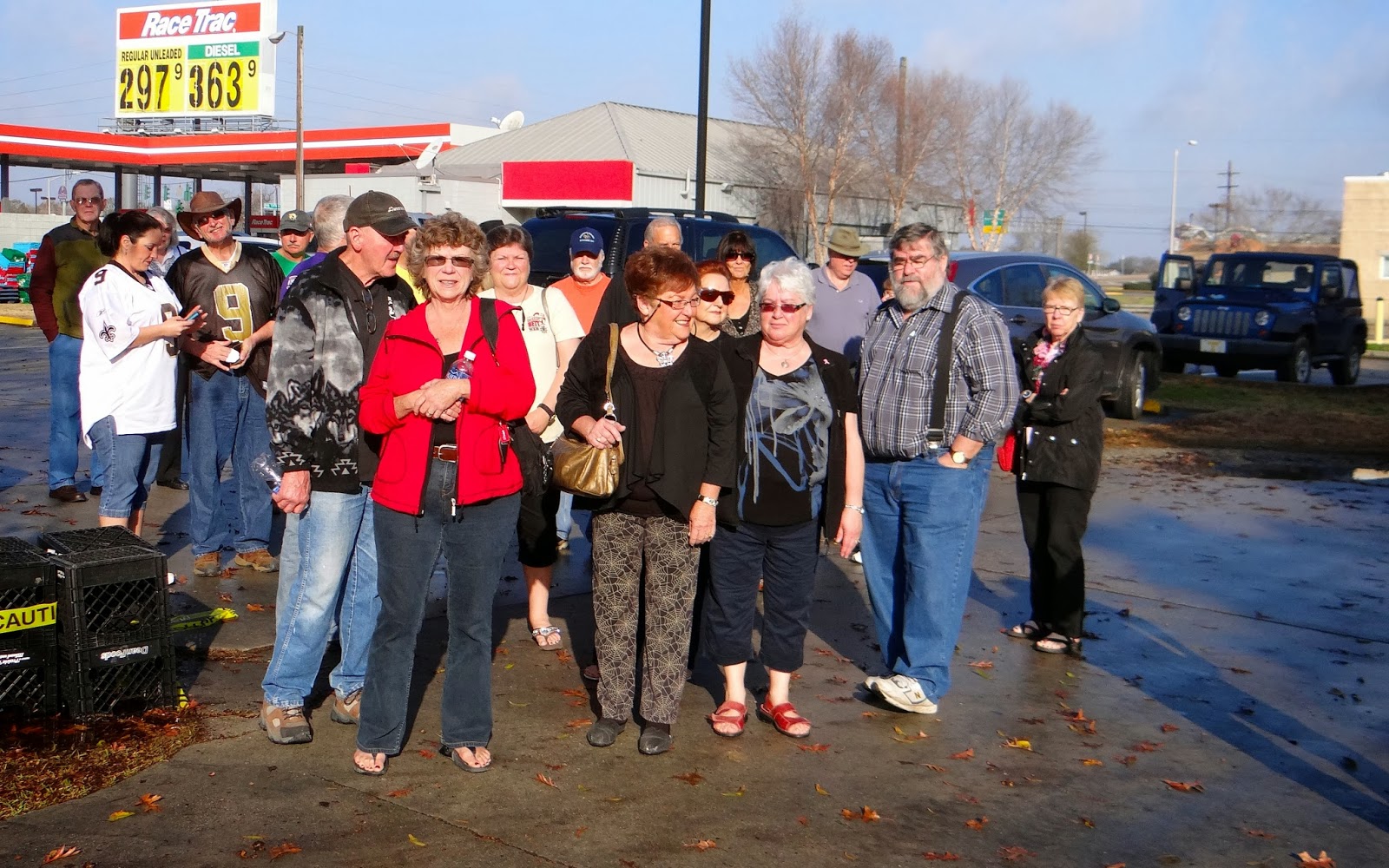 The Betty's RV Park Cult outside the factory/museum.  That's Betty, center, in the black top.  Most of the group are yearly repeat visitors from all over the US and Canada 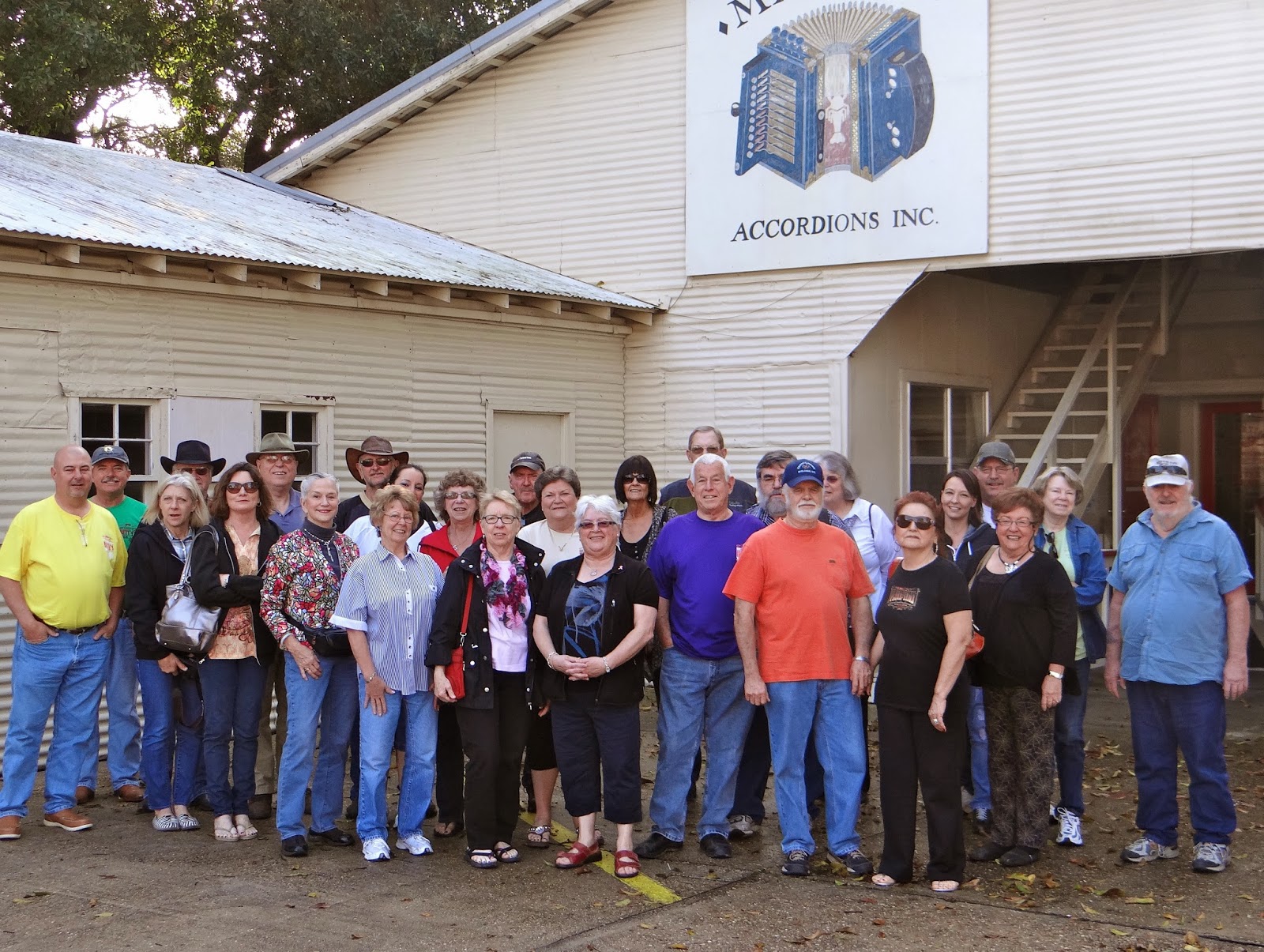 Another shot of the group just before heading into the building
Close up of the Martin Accordions Incorporated Link
Cajun music:
Although I didn't get his permission to use his name, the gentleman in the yellow tee shirt bought a magnificent Martin's Accordion, which he played for us Saturday evening.  The diatonic accordion is new to him, but he sure entertained us at happy hour!  (The blond lady in the black sweatshirt is his wife.  He was probably warning her, before we entered, that he was in the market for a new instrument). 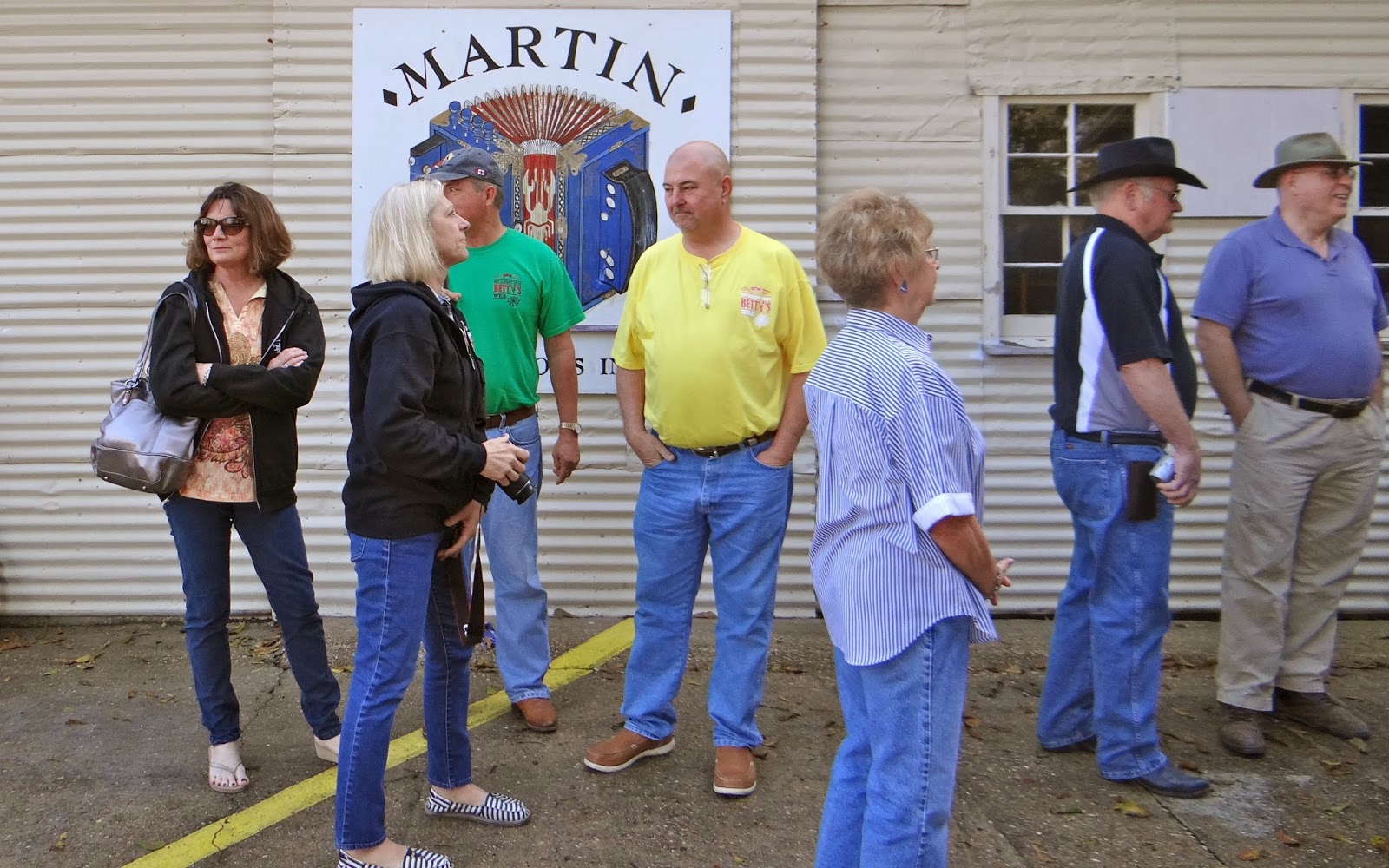 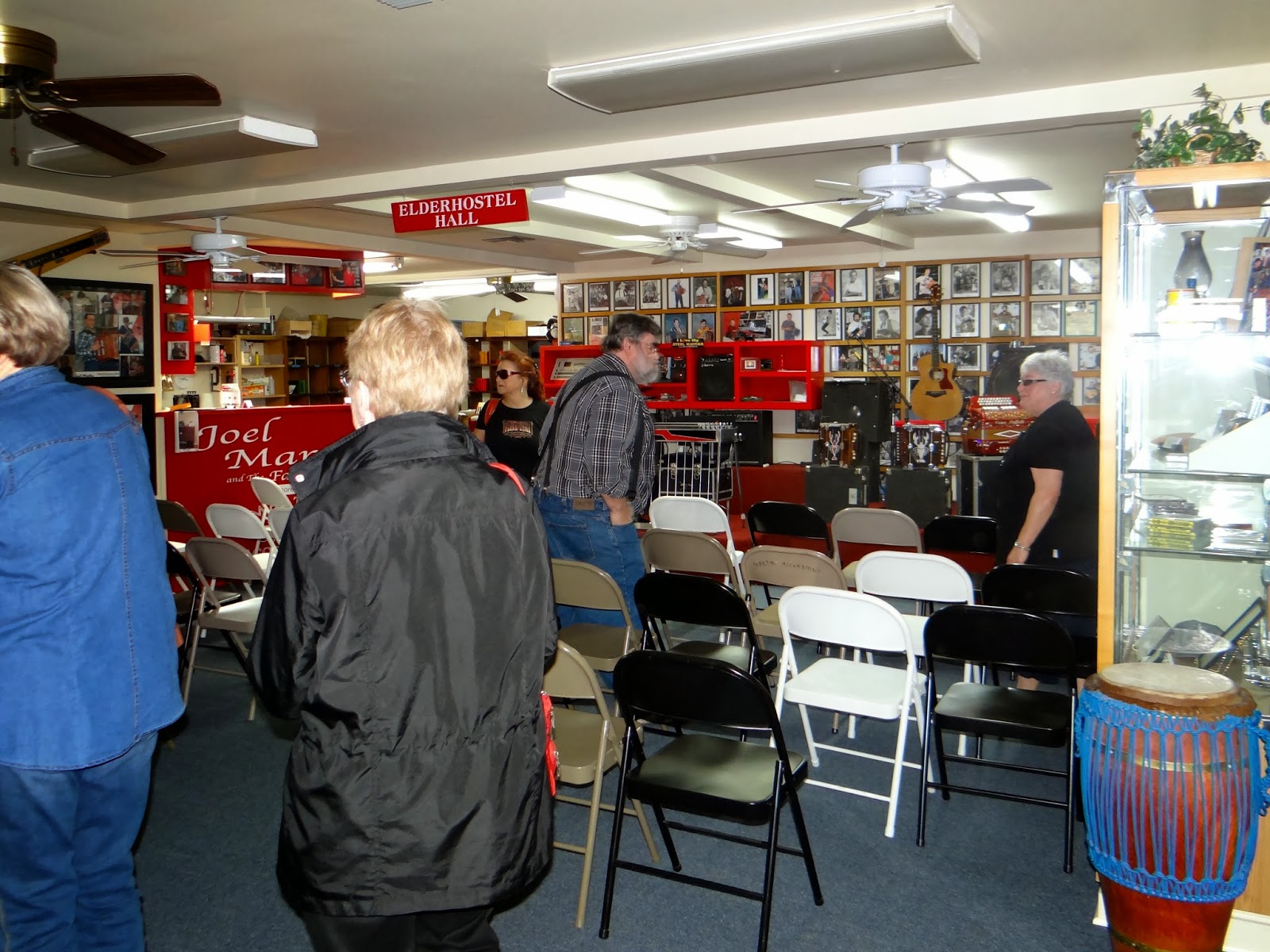 As we entered the very unassuming-looking building we found that the main room was set up as a mini auditorium. We were in for a Cajun music treat. 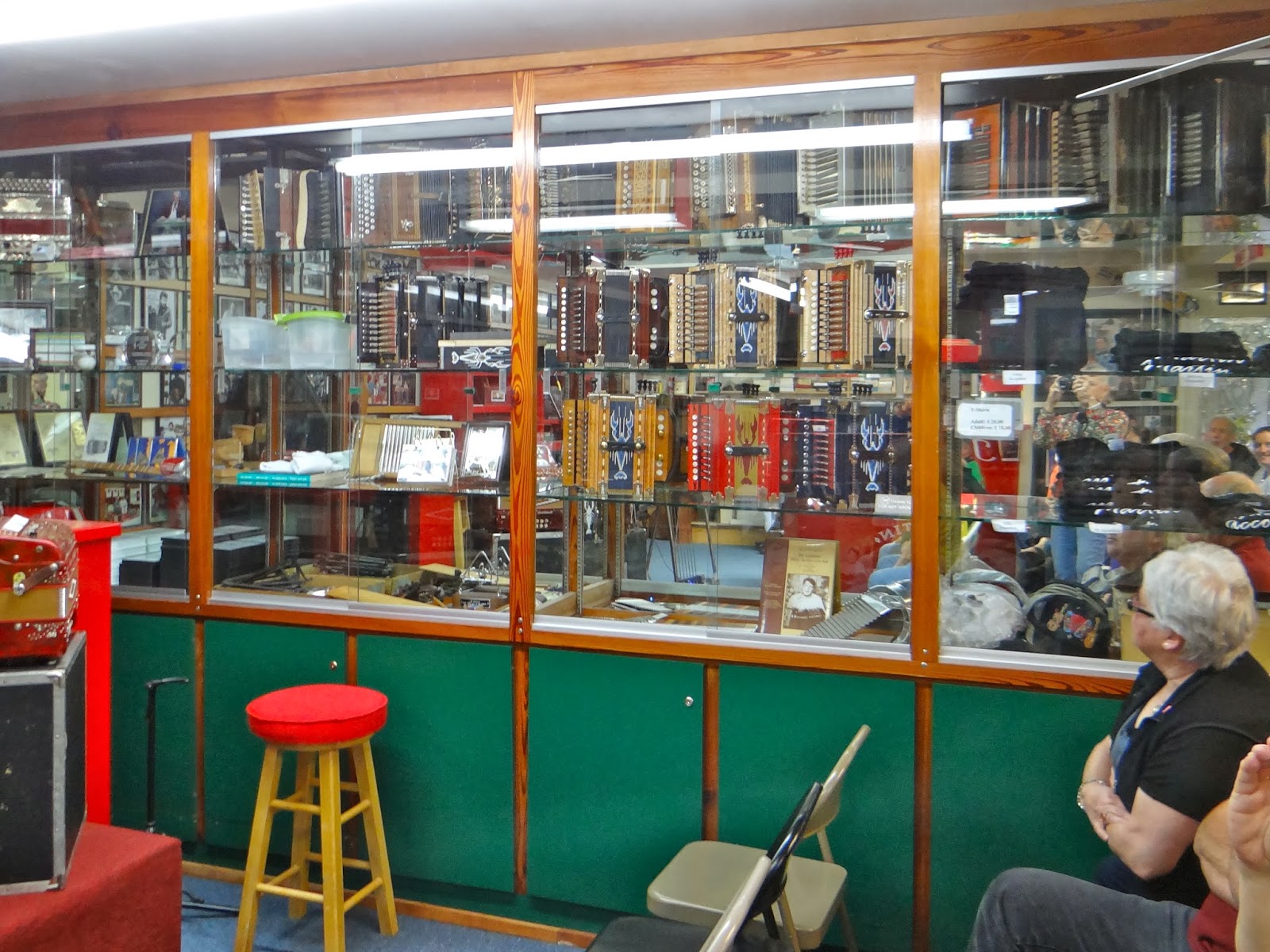 On one side of the room was a display case with a few newly handmade accordions waiting to go to their new homes and also several antique models with a lot of historical value. 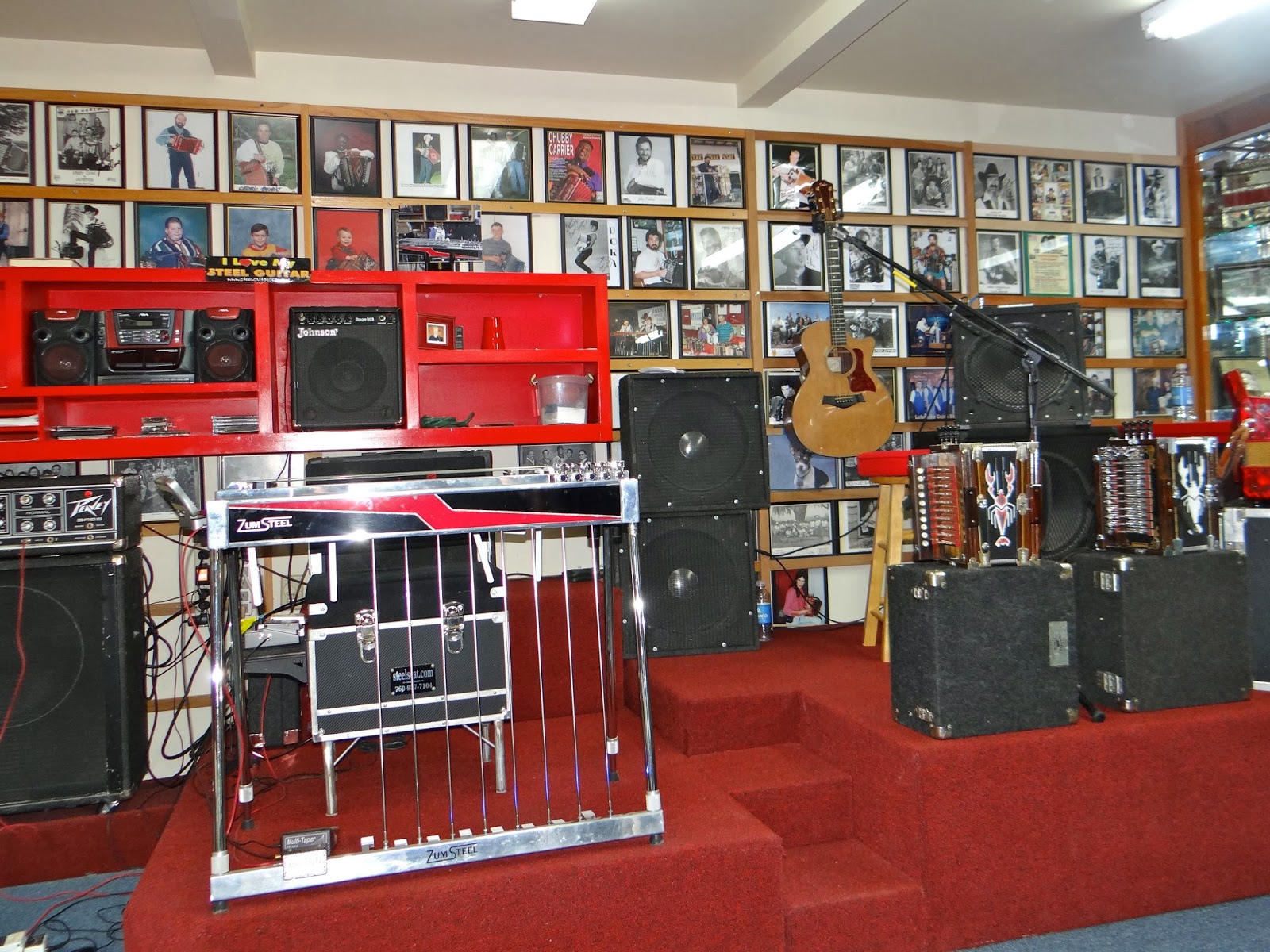 The room was wallpapered with hundreds of photos of the greats and the not-so-well-known Cajun music makers throughout the history of this culture in Louisiana.
Junior Martin and his family have been hand making Cajun accordions Link
here in Lafayette, Louisiana for many, many years.
Joel Martin, grandson and Cajun accordionist extraordinaire is the current 'master entertainer' of the family:  writing, producing and performing music and songs to continue the long tradition of Cajun music and culture 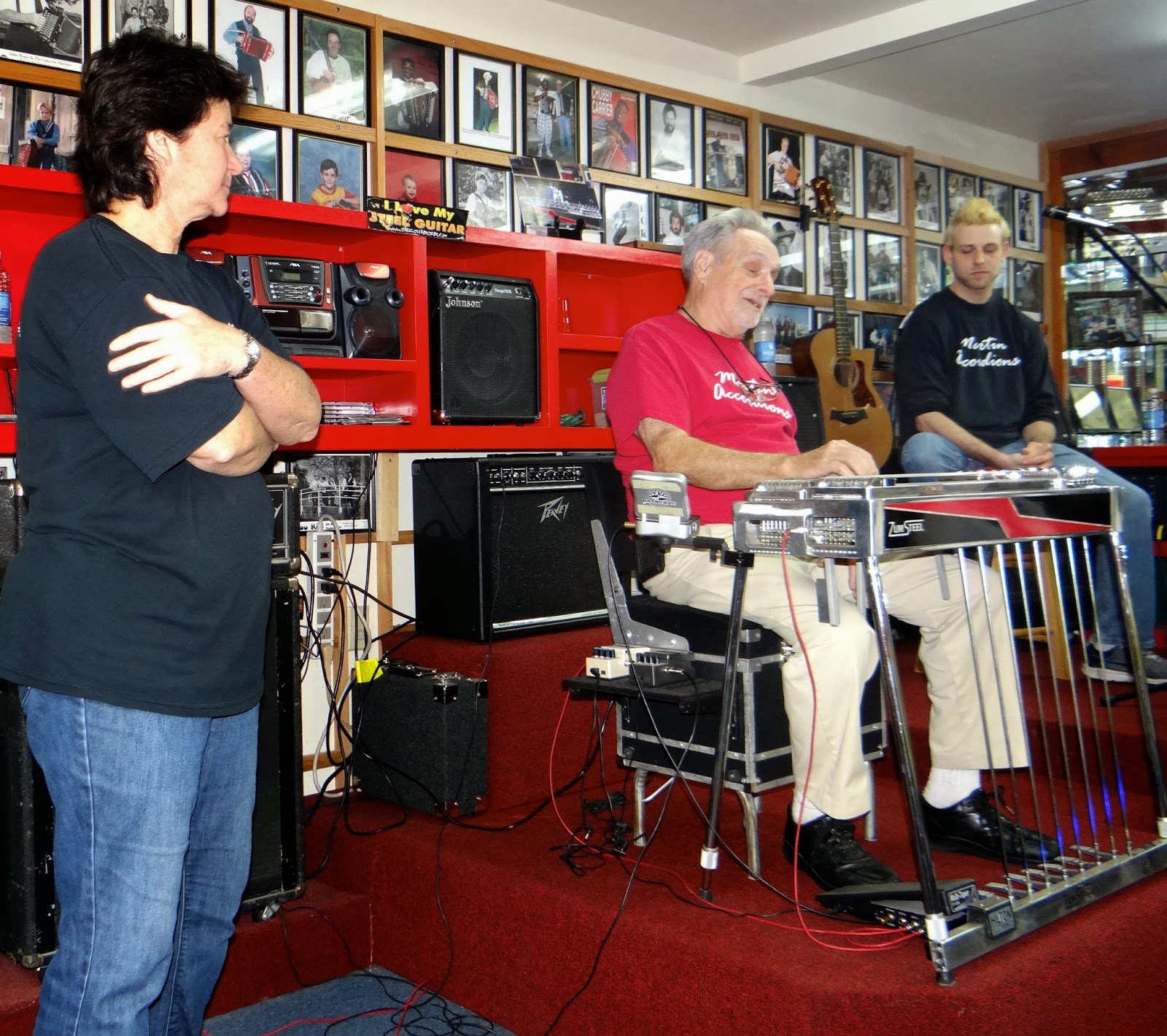 This is Jr., his daughter [name] and Joel (grandson)  getting ready to give us a great performance
of Cajun and Zydeco music 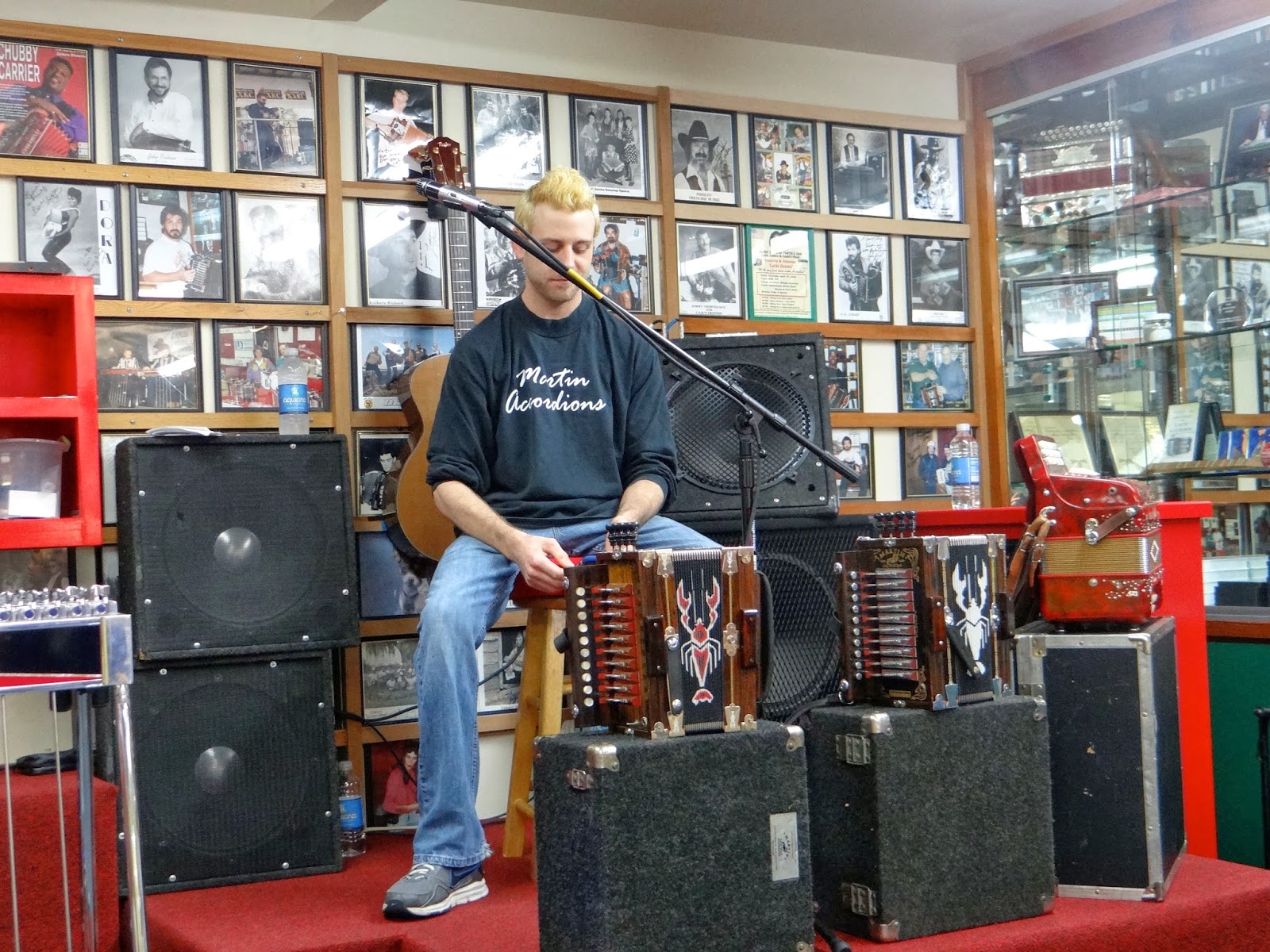 For any serious Cajun accordion player it is necessary to have at least two accordions at his disposal at all times.  Below is a close up of one of Joel Martin's accordions with it's trademark crawfish hand-painted on  the front of the bellows 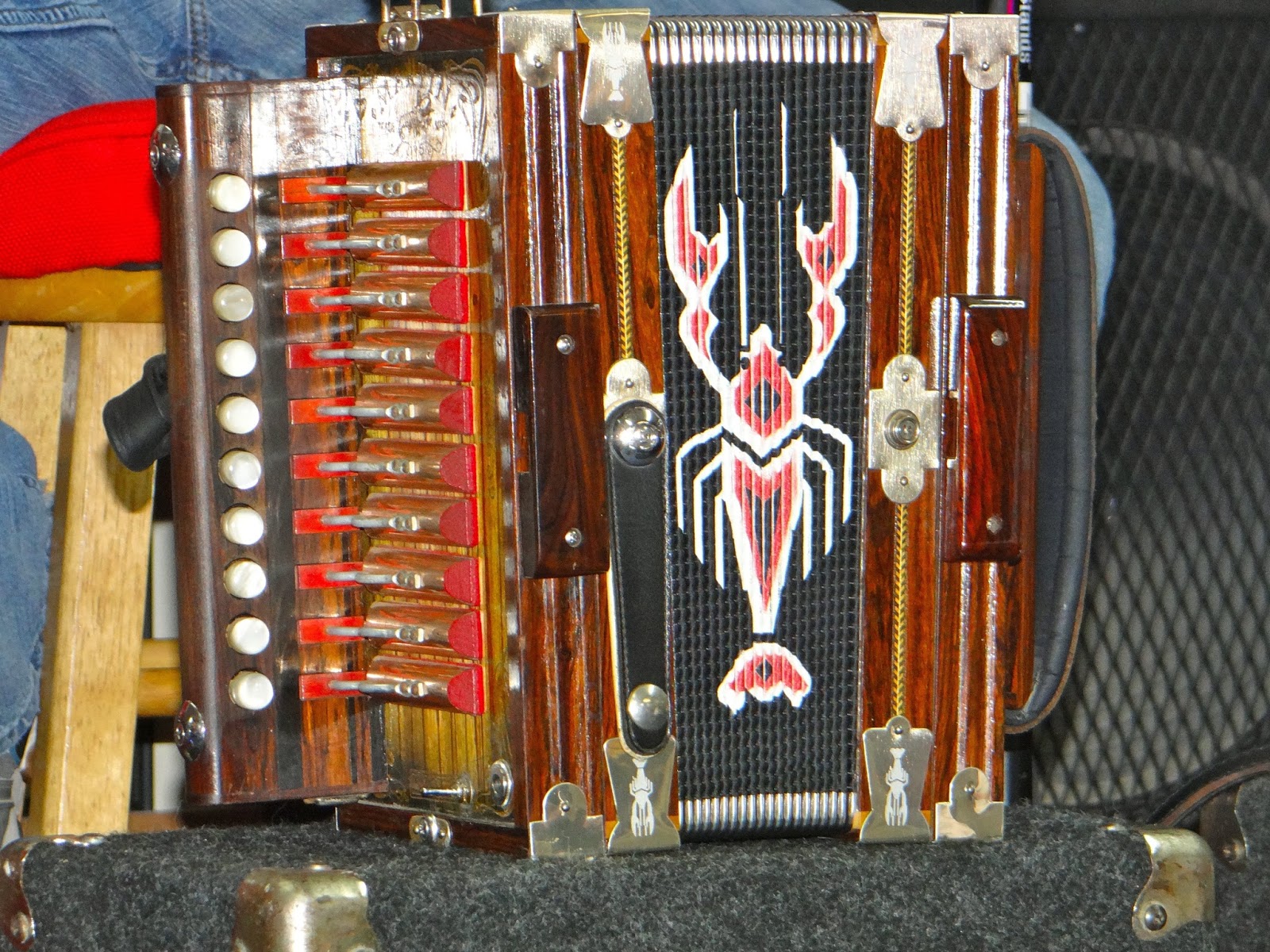 Junior "PaPa," his daughter, [forgot name] (an elementary school principal) and Joel (song writer, producer, professional entertainer) set up to put on such a wonderful morning of history and enjoyment of the Cajun accordion and its music.
Martin's makes about 83 accordions a year.  Many are stock colors and woods, as below- shown below.  These are ready to have the bellows and musical notes / keys added.  It takes approximately 3 months to make an accordion.  They can be custom made and decorated to order. 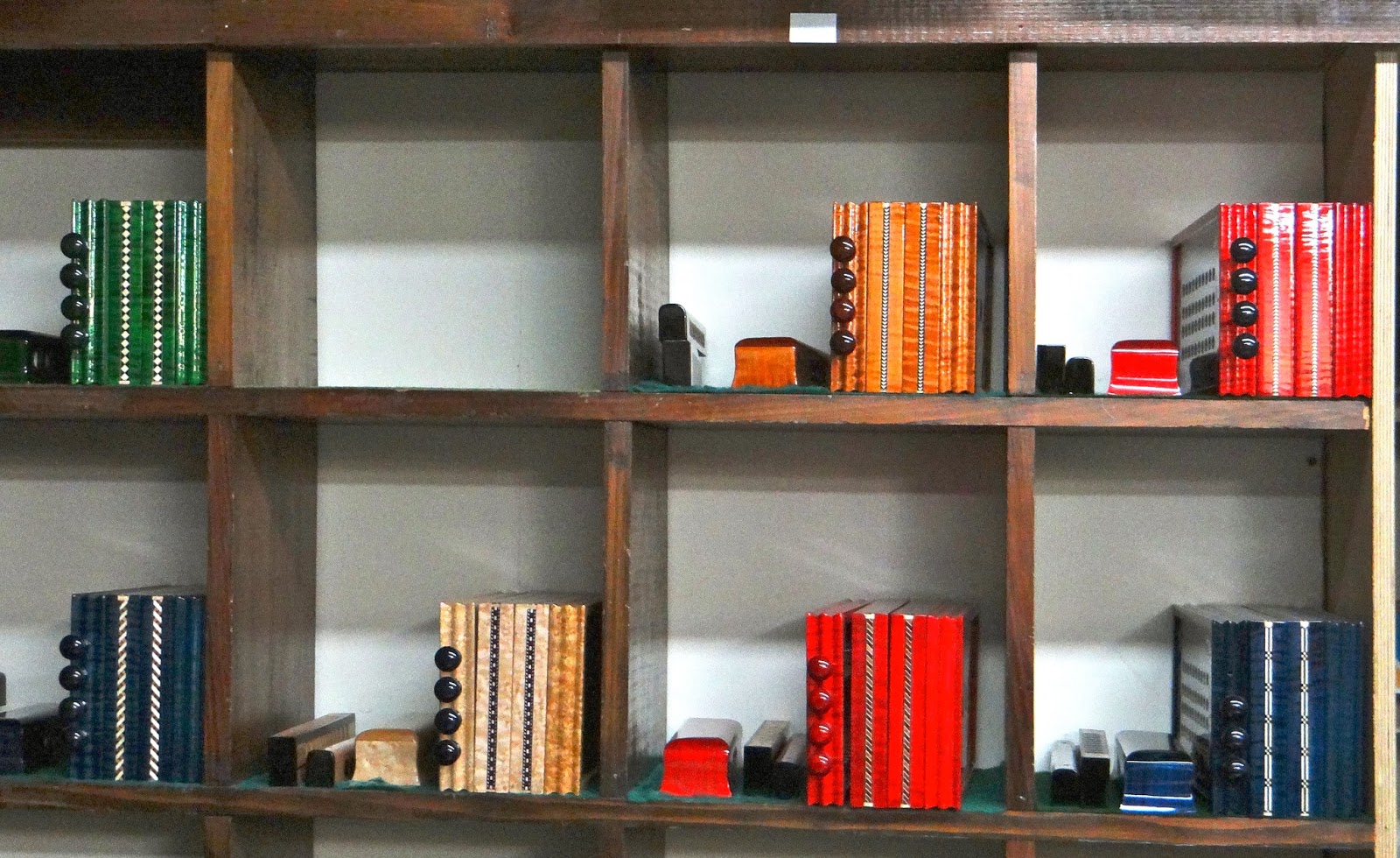 This is a poor photo of the accordion purchased by one of our own!  The crawdad painting on the bellows and other embellishments to be added. What Are Cajun and Zydeco Music?
From wikipedia:  Cajun music, an emblematic music of Louisiana, is rooted in the ballads of the French-speaking Acadians of Canada.  It's often mentioned in tandem with the Creole-based, Cajun-influenced Zydeco form.  Zydeco is rooted in Africa, brought to the Americas by the African slave trade.  In a Cajun musical group one will find the triangle used to maintain the music's beat.  In Zydeco, it's the wash board (goes by many names).  Both Louisiana sounds have influenced American popular music for many decades, especially country music.
What a wonderful morning of music!
When / if I figure out how to upload the videos I took during the morning musical treat, I'll post them!!!  Sorry for the delay!

After our visit to Martin's Accordions we wanted to continue the Acadian flavor of the day; so we stopped at NuNu's Country Market 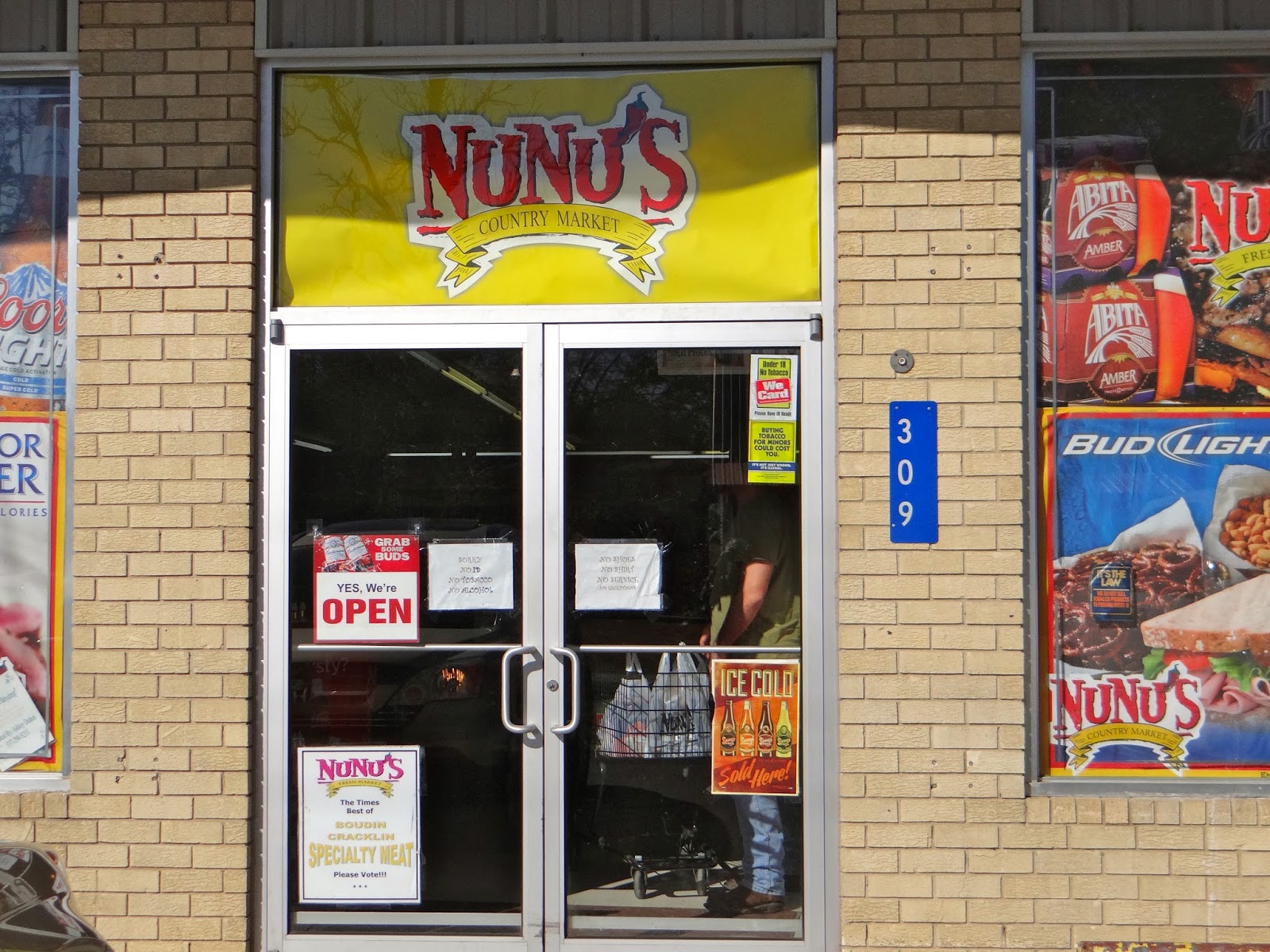 These little markets are almost everywhere you look, often tucked away in very unsuspected locations.  NuNu's is one of the best.  A small country store having one check stand, the staff is down-home friendly and helpful. 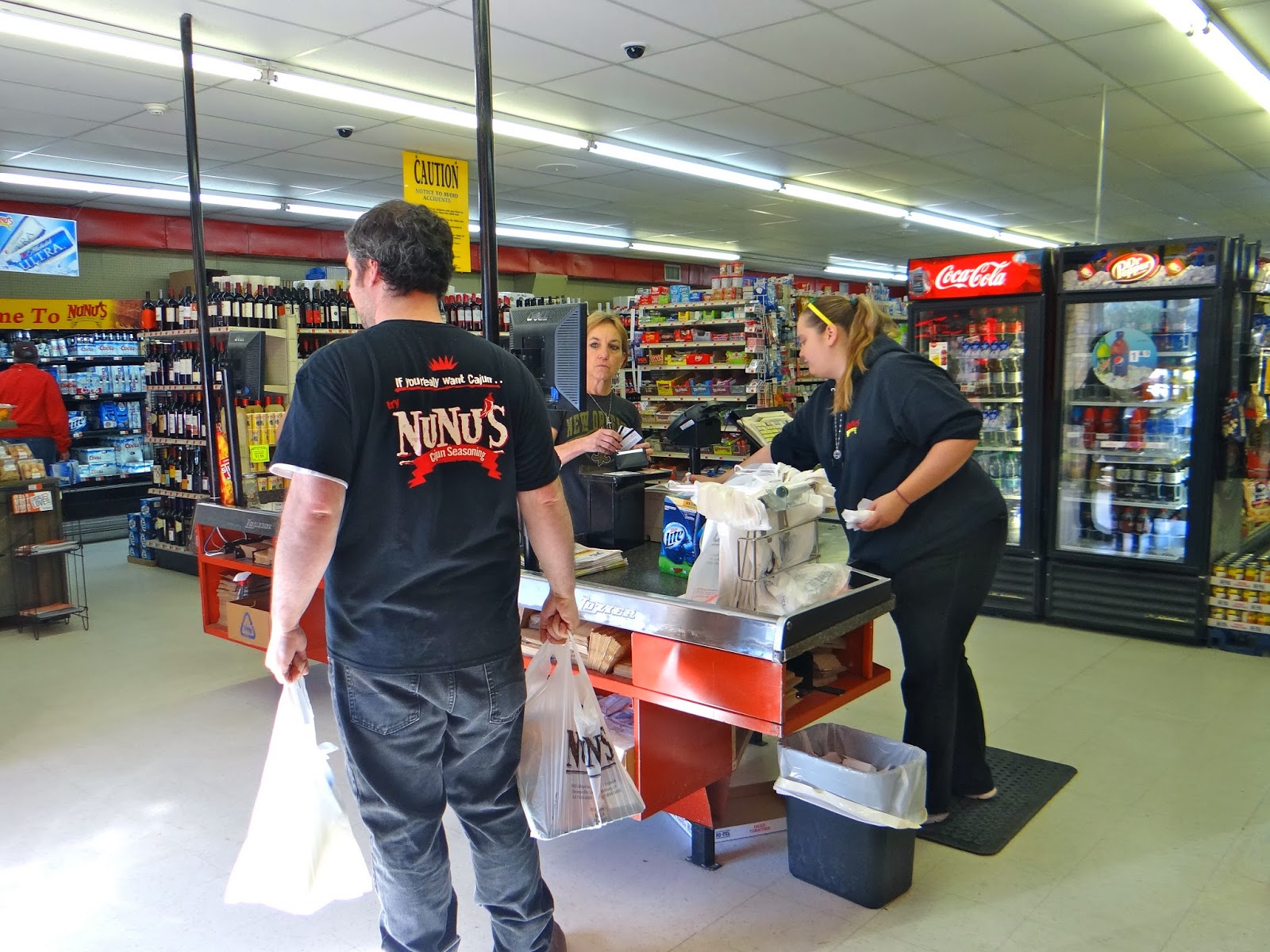 The meat counter features many Cajun specialty meats and seafoods presented in beautiful, fresh packages.  It's hard to make a bad decision 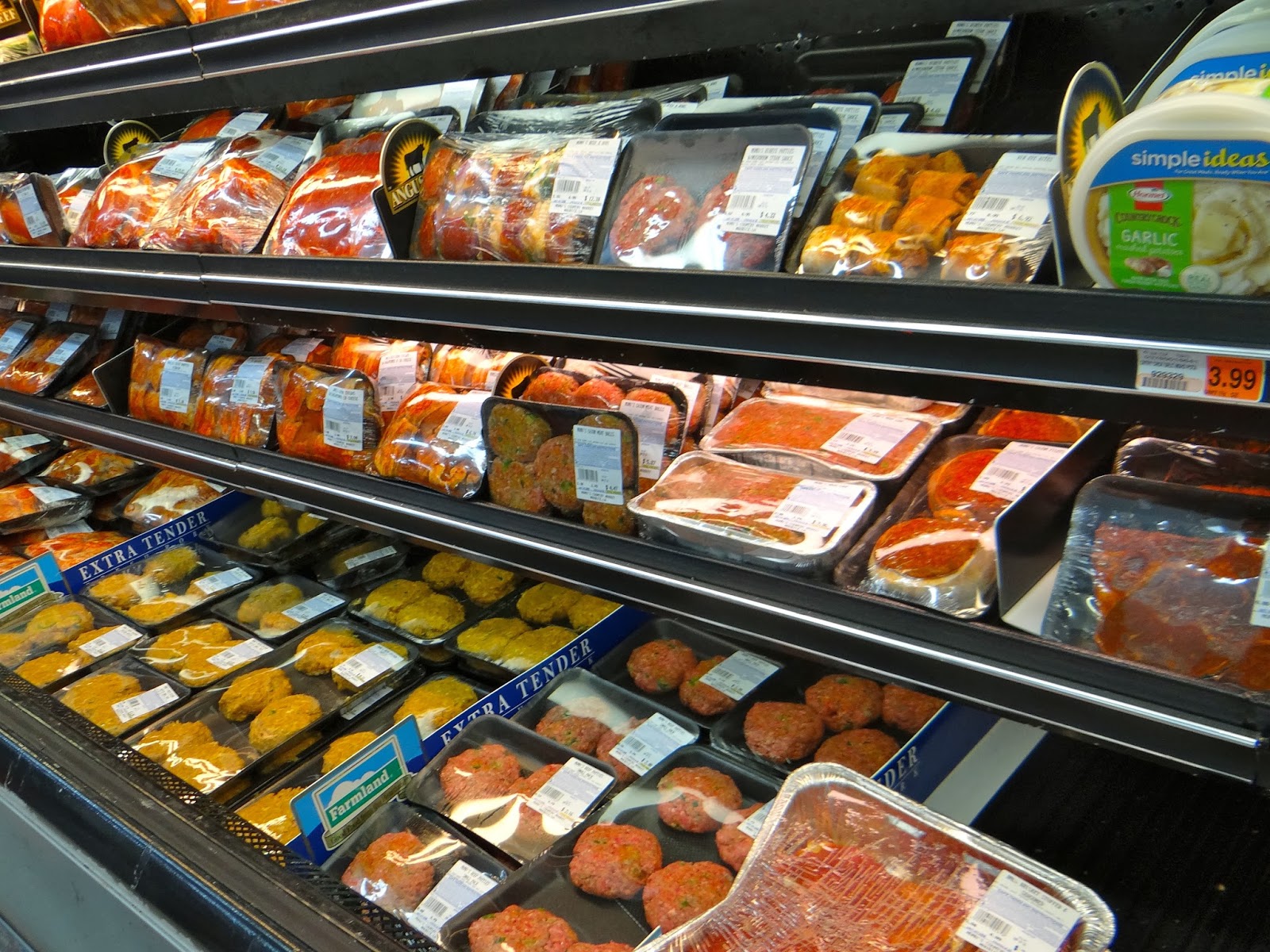 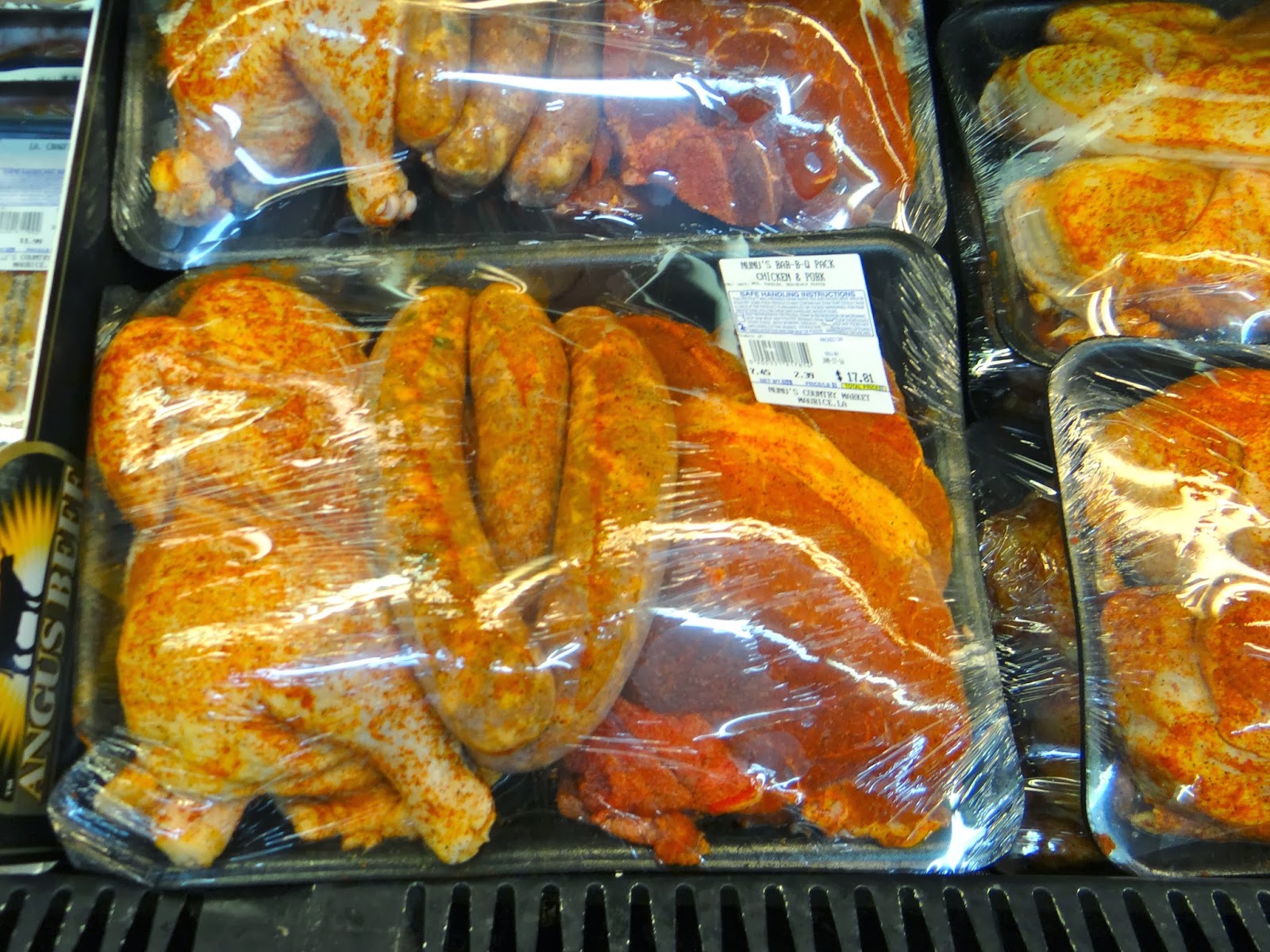 Here's Sharon (Iowa) choosing from the vast array of Louisiana sausages, including boudin 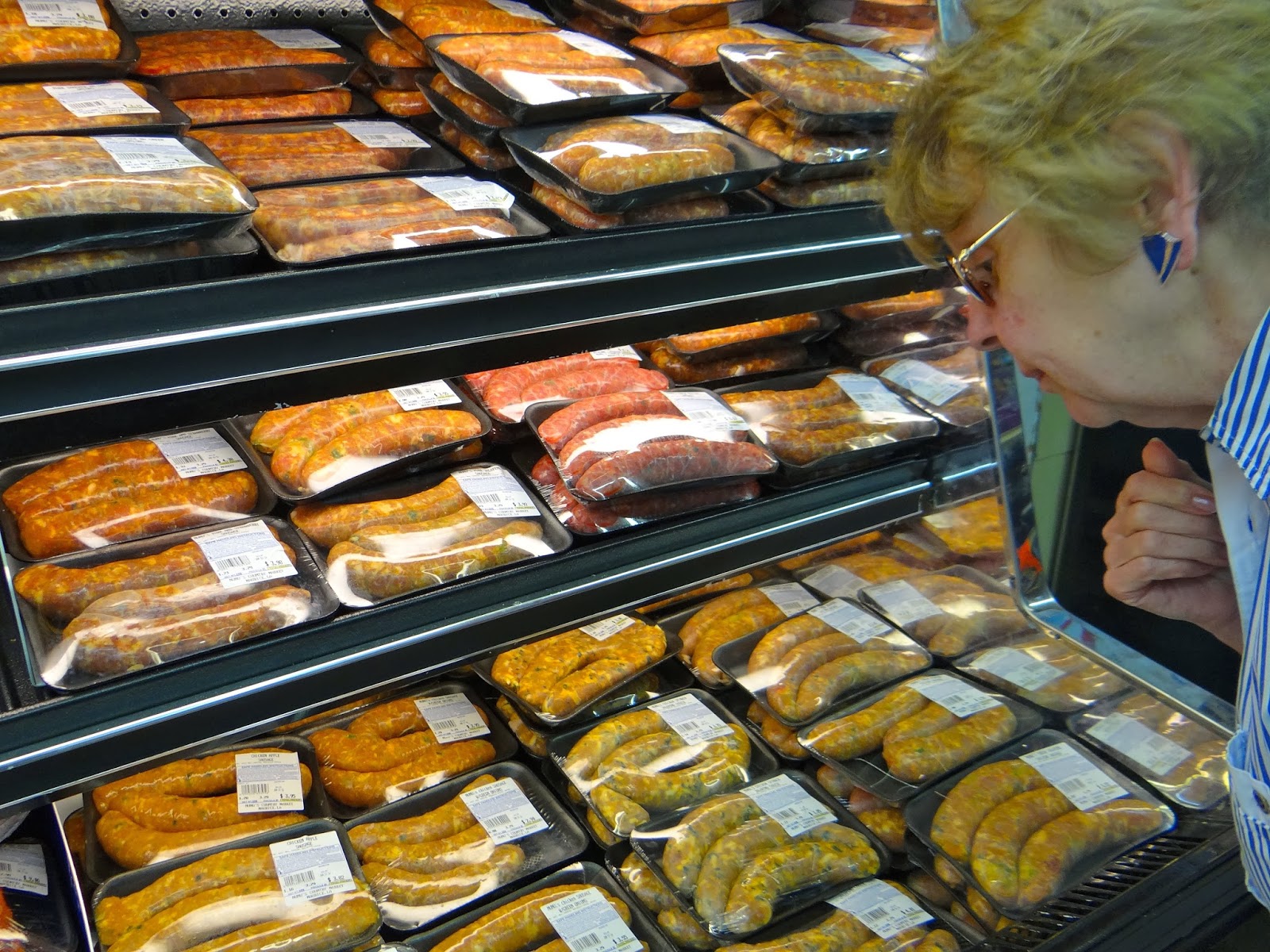 Lots of seafood choices featuring Louisiana-fresh seafood.  Below are freshly-made packages of catfish stuffed with crawfish, seasoned and ready for the frying pan 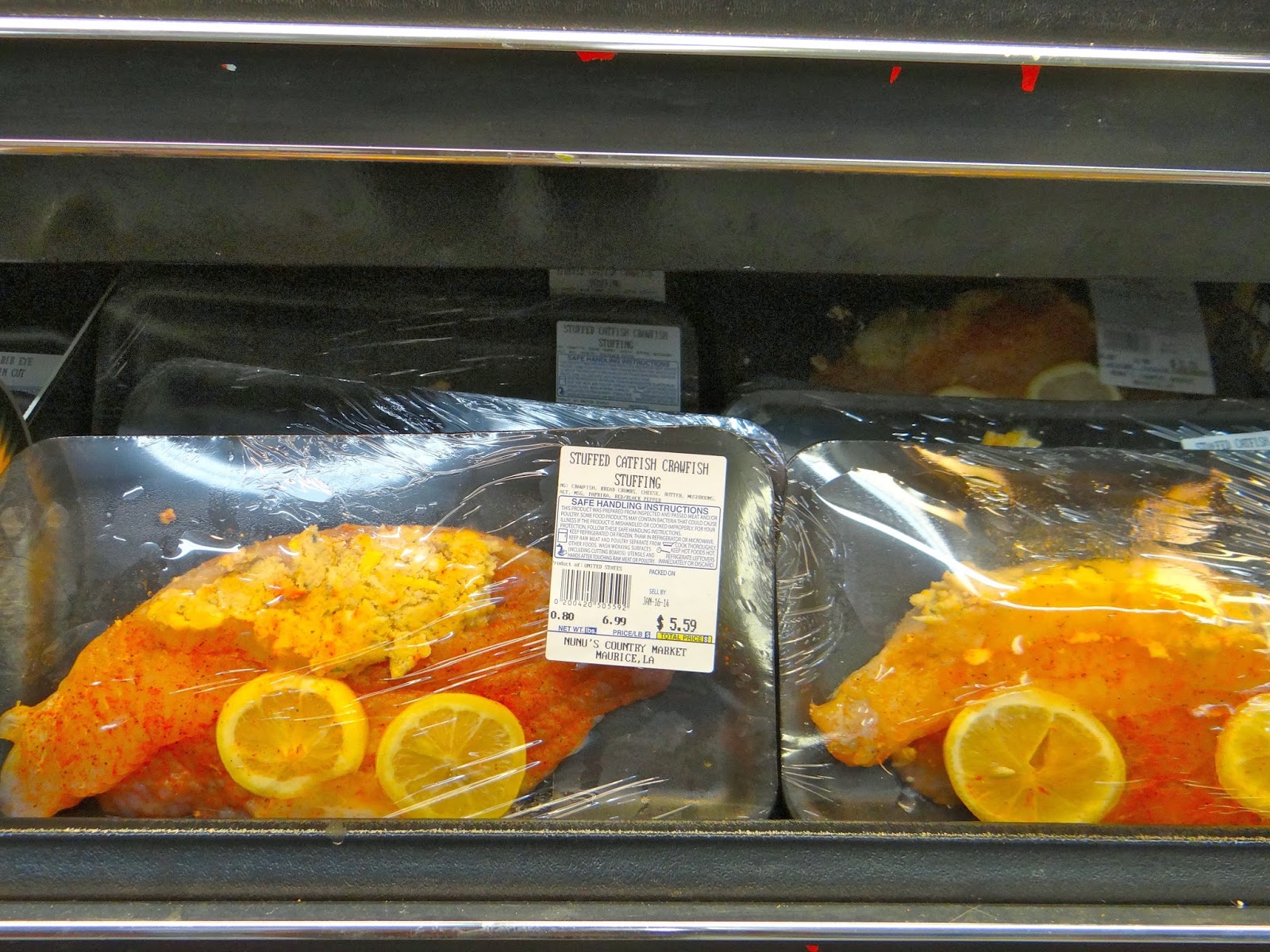 But, the meat department isn't the only important section of NuNu's
Here's Sharon perusing the extensive Pepper Sauce department 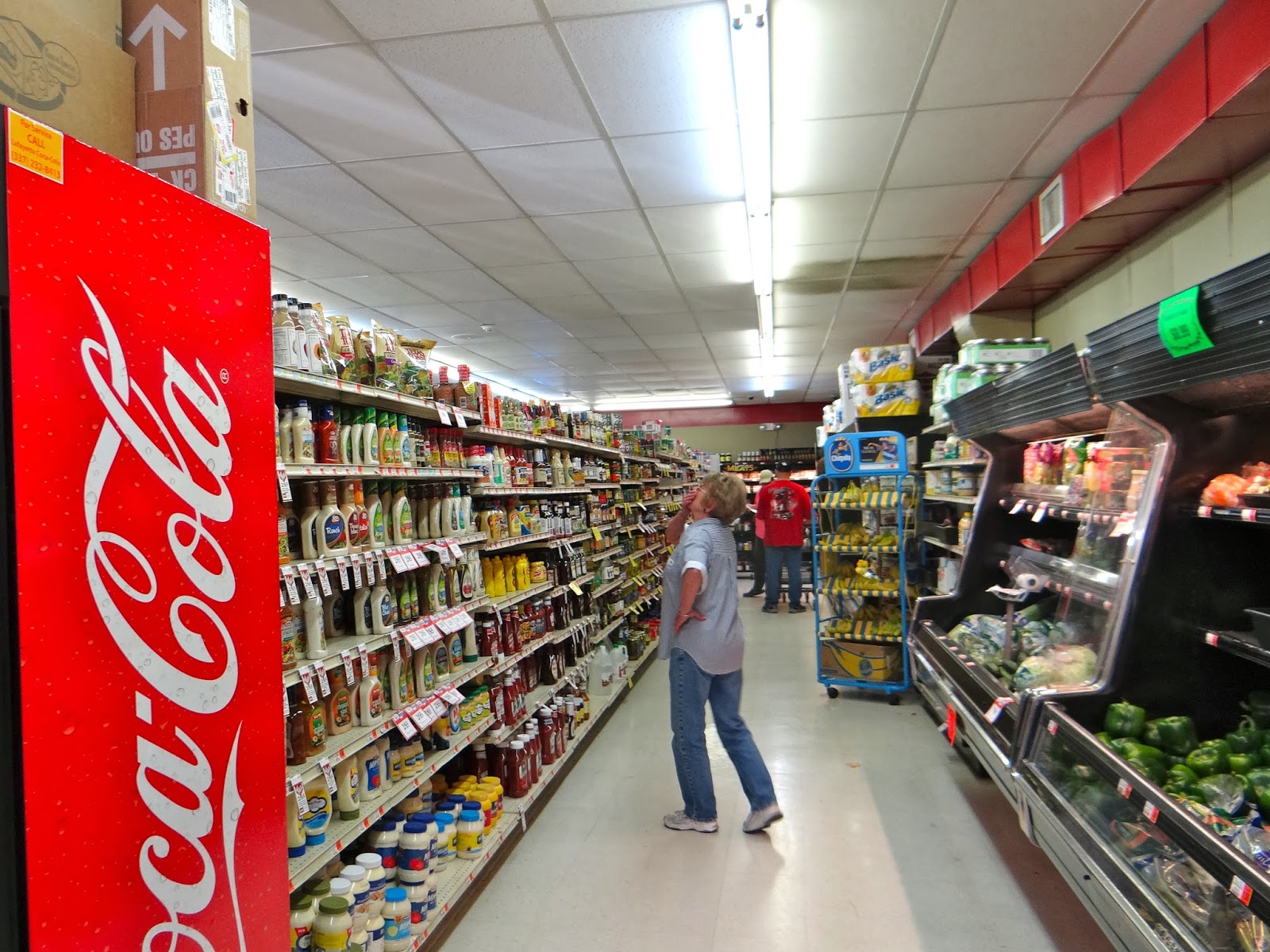 Besides the ever-present Tabasco Pepper Sauce, made right here on Avery Island, Louisiana, there are innumerable brands, each with its particular 'take' on pepper sauces.  The flavors are almost unlimited! 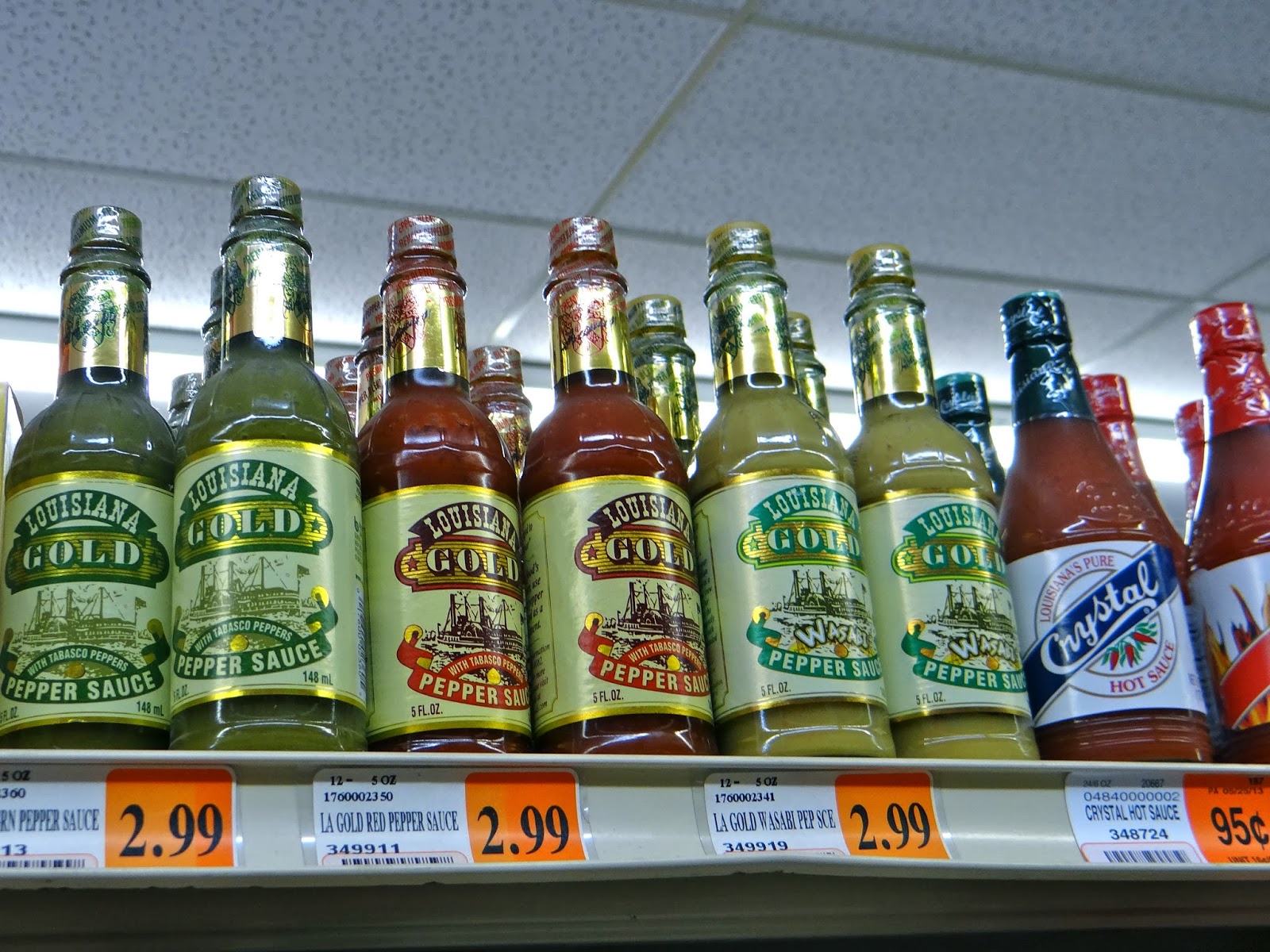 Then, to top off the Cajun outing we stopped and ate lunch at The Villages Cajun Cafe, just outside of Lafayette.  I was so hungry I forgot to take any photos; but I'll definitely go back - and will photograph this little gem of a restaurant.

Sharon, Wayne, Marvin and I all had Po'Boys, the traditional submarine sandwich from Louisiana.  They usually consist of meat, usually roast beef or chicken, or friend seafood; the most popular is probably a Shrimp Po'Boy.  They're served on a baguette-like Louisiana French bread, known for its crisp crust and fluffy center.
The Po'Boys here are huge.  Marvin and I shared a grilled chicken Po'Boy, Sharon enjoyed a half of a Shrimp Po'Boy and Wayne tackled and finished off a full roast beef.  We shared a fabulous plate of French-fried sweet potatoes, sprinkled with cinnamon sugar (which is actually a prepared seasoning one can buy in the supermarket)
And, the coup de grace (stroke of grace) was an order of Beignets for dessert.  A beignet is a fritter, a square of fried dough eaten hot, usually liberally sprinkled with confectioner's sugar.  For me it provided a flash-back to my childhood when my mom occasionally made beignets on a Saturday night, while we stayed up late to watch movies on TV.
What a fabulous Louisiana Cajun day!
Posted by mps2343 at 7:25 AM