After another hardy breakfast we boarded our bus with our guide, Maher, and our driver, Rafi, and drove to Mount Zion.

The designation Mount Zion has been the  name of three different locations in Jerusalem. The current location that is considered "Mt. Zion" is ancient Jerusalem’s Western Hill , which is just outside the walls of the Old City. More generally, all of Israel is sometimes referred to as Mount Zion.

Below is the Zion Gate into the Old City: 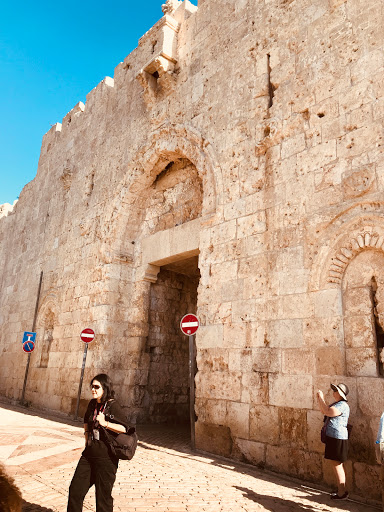 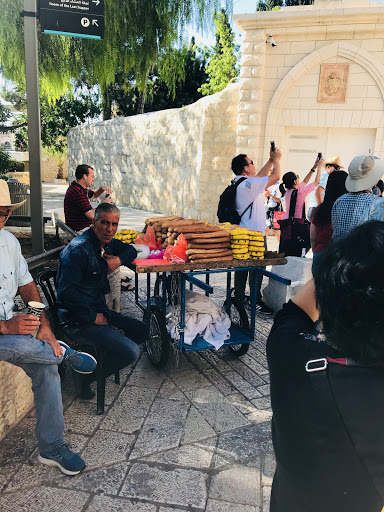 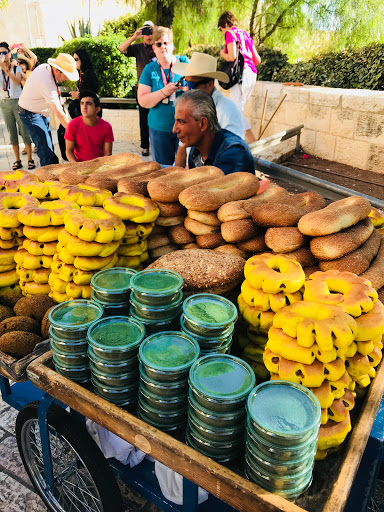 Above is a vender outside the Franciscan-run Upper Room on Mt. Zion, where there is a replica of the room Jesus instructed his disciples to rent for them to celebrate the Passover Seder.

Below is a statue of St. Francis located on the building that houses the Upper Room replica and the Upper Room Church where Father Chris said Mass today. Interestingly, the Franciscans have been protectors of the Holy Land for over 800 years. 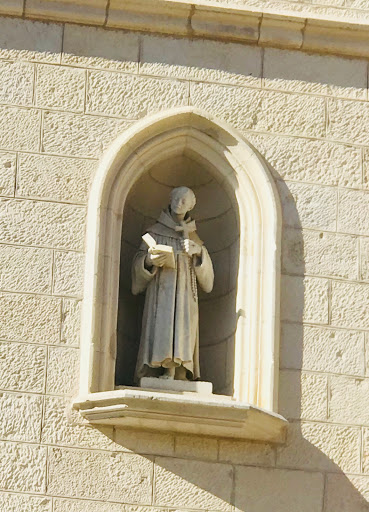 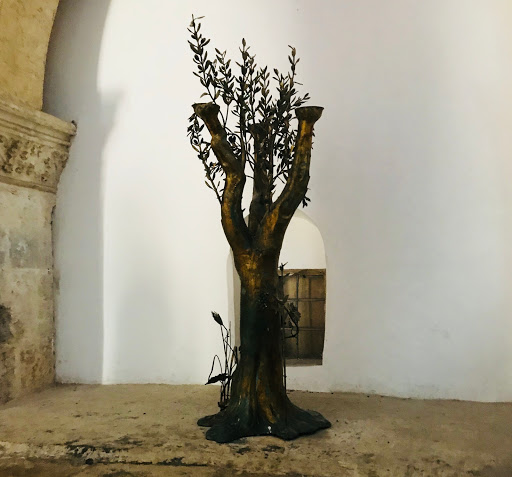 Above is the table where Jesus and the Twelve Apostles celebrated Passover. There was a Tree of Life on it.

[The Upper Room was also the place where Jesus appeared to the apostles after His resurrection and where Doubting Thomas had to touch Jesus’ wounds to believe it was really He.]

After 300 years of Ottoman Empire rule of the Holy Land, the Ottomans were in need of money at the end of the 19th century and European money started coming in to help the Franciscans, so there is still a German influence on the architecture. See the bell tower of the Upper Room Church below: 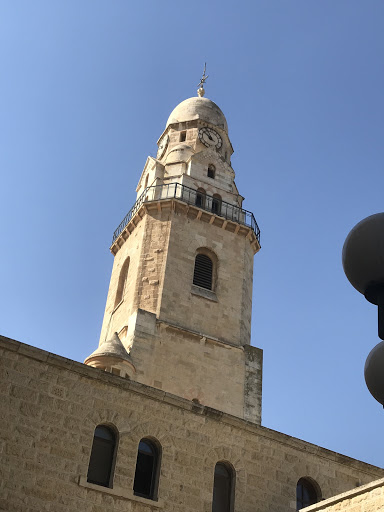 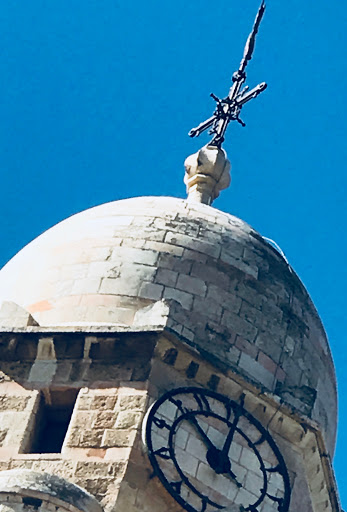 Of course at the time of the two World Wars, the Germans were not supporting anything in the Holy Land, but after the end of the Second World War, they, and other European countries again began bringing money to the Franciscans here.

Next we visited the Benedictine Abbey of the Dormitrion with its Hagia Maria Sion.  Scholars don’t know for sure what actually became of the Blessed Virgin Mary after Jesus’ resurrection. Many have been convinced that Mary fell into a deep sleep in Jerusalem and ascended bodily into Heaven. In the Hagia Sion there is a tribute to Mary, depicted as being asleep before her Ascención into Heaven. 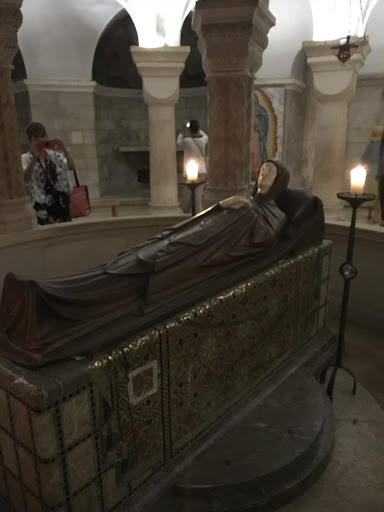 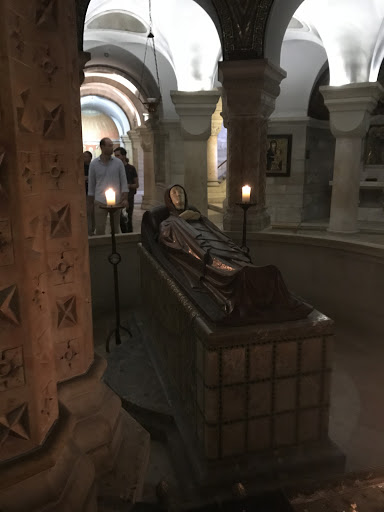 Also located in this Benedictine Monastery is King David’s Tomb, although it’s not actually considered to be the exact location. Throughout the ages, there have been many wars and battles; many historical landmarks have been mistakenly and meaninglessly relocated. What we saw may, or may not, be the actual tomb.  To the left in the photo below is an elderly Jewish lady who was rocking back and forth as she chanted prayers. The Abbey has been the first Christian meeting place, a Mosque and a Synagogue. 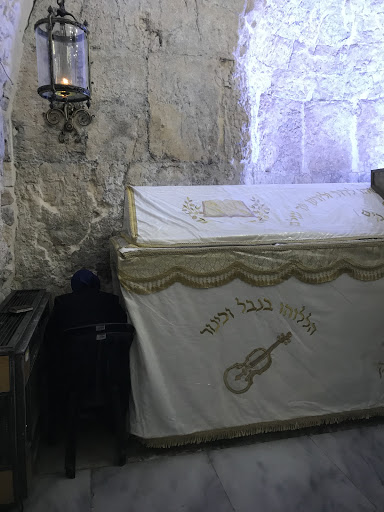 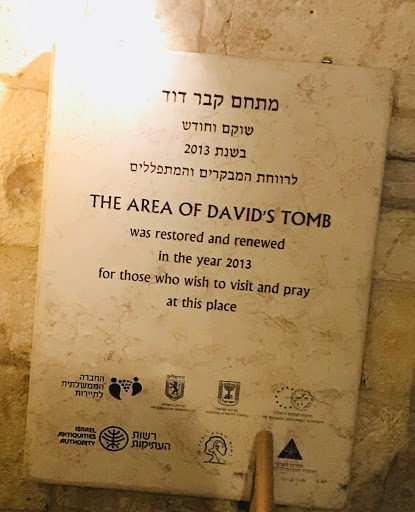 Also on Mount Zion is the Church of Saint Peter in Gallicantu (meaning cock’s crow).

This commemorates Peter’s 3 denials of Jesus after Jesus is arrested.  Below is the cock, the woman and the Roman soldier who’s come to arrest Him. [Luke22:57].  "But he denied him, saying "Woman,I know Him not." 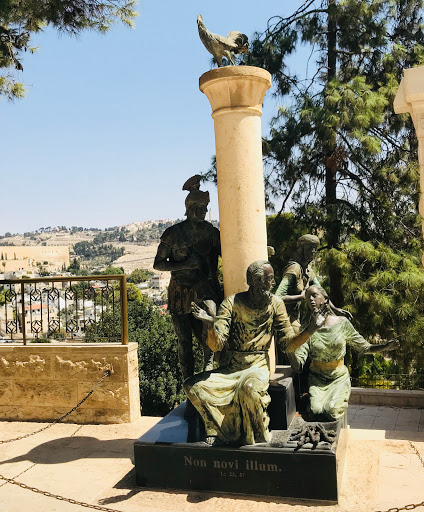 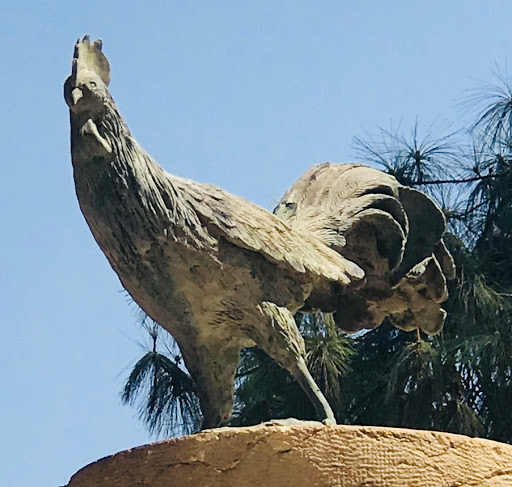 Below is the actual path the Roman soldiers led Jesus away, bound and scourged. 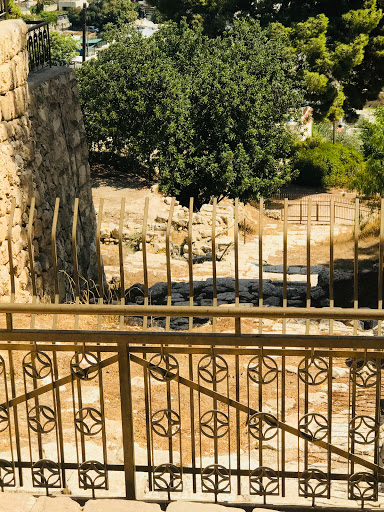 Below a plaque depicting the soldiers pulling Jesus along the path on their way to the high priest Caiaphas’ palace where He could be tried in a religious trial. We visited the Monastery next to the church. 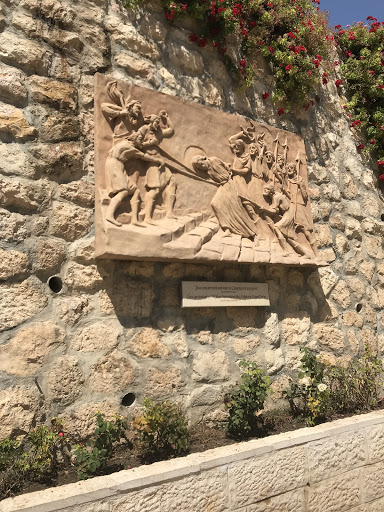 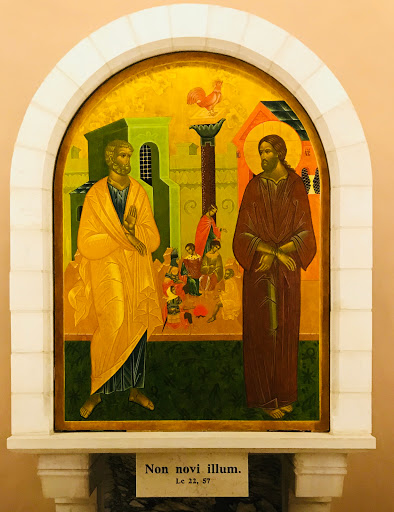 After they had arrived at the high priest’s house, Peter arrived there and, as Jesus had predicted, Peter denied Him three times before the cock crowed twice. 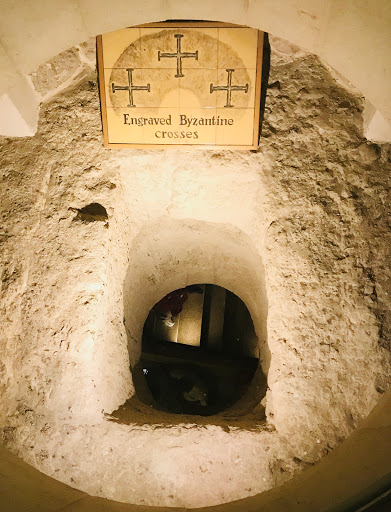 As they found The King of the Jews guilty in the religious trial Caiaphas wanted to make sure Jesus would not be harmed by other inmates, so he kept the prisoner in his own house, rather than a prison. He had the soldiers tie a rope around Jesus’ shoulders and they lowered him into a cistern (above) in the house:  hot, humid, mosquitos, insects, DARK. It was a dungeon in every sense of the word. 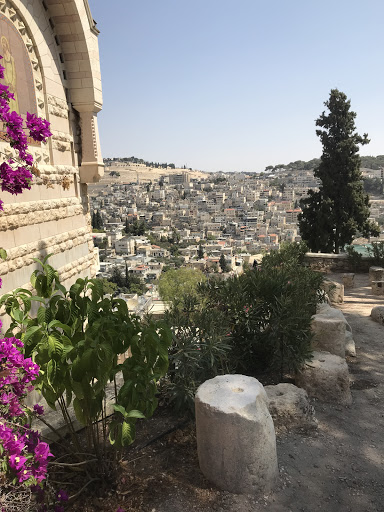 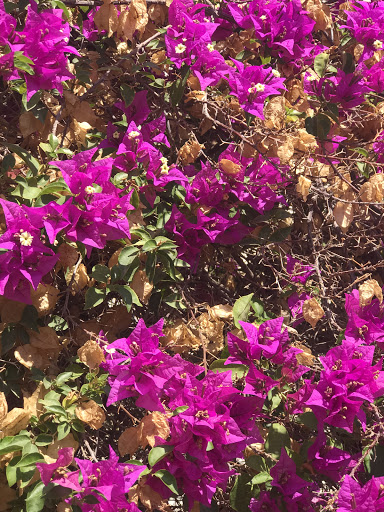 I’m only part way finished with this post, but will finish up today’s adventures later - in order to go to bed for an early wake-up tomorrow morning. Leaving at 7:30 we’ll walk the "Via Delarosa," the 14 stations of the cross and more. Stay tuned . . .