We had breakfast at Pilgerhaus Hotel before leaving to drive around the northern end of the Sea of Galilee, which is not really a sea but a fresh water lake; then, south on the western side of the Sea, driving into Syria territory and also into the kingdom of Jordan - more countries to check off my bucket list.  We stopped at a place called The Qatar Al-Uahud baptismal site where John the Baptist baptized Jesus in the River Jordan. It was a mob scene; there must have been a thousand people there, hundreds of whom actually were being submerged in the river as they were baptized. As all of our group were baptized we settled for having some river water sprinkled on us. I did dip my hands in and the water is like a bathtub! 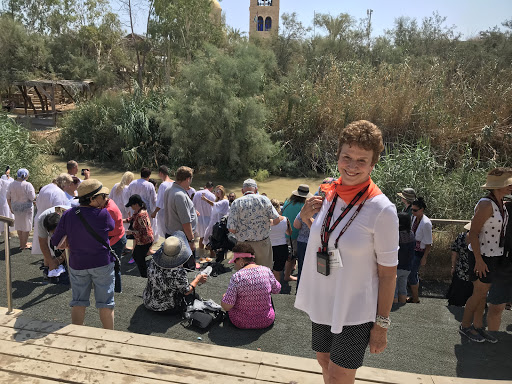 In our super modern tourist bus we traveled through the fertile Jordan Valley to the outskirts of Jericho,  where we visited the base of the Mount of Temptation, the location where the devil tormented Jesus after his forty days of fasting in the desert. We drove into the ten thousand year old city of Jericho, supposedly the oldest continuously inhabited city in the world.

We had lunch in an Arab Restaurant named "Lemon" in Arabic. We had a lovely meal of barbecued chicken and lamb shush kebabs with delicious pita bread, which was being formed and freshly baked in an outdoor oven.  Almost every repast includes wonderfully fresh Mediterranean vegetables and fruits, reminding me once again how much I love this food:  hummus, cucumbers, tomatoes of all sizes and shapes, olives and olive oil, dates, melons and baklava.  The list goes on and on.

After lunch we walked to the Good Shepherd’s Church where Father Chris said Mass, asking me to lead the congregation in today’s psalm. After Mass we walked to a glass souvenir shop in downtown Jericho, where I didn’t buy one thing!  Some others in the group, however, did some important retail therapy!  Jericho is hellishly hot and humid and arid. How can it be humid and desert-like at the same time?!

From Jericho we continued along the River Jordan that then feeds the Dead Sea.  Interestingly, the fresh water feeds into the Sea but there’s no outlet so it sits there and absorbs salts from the underground rocks, etc., which concentrates as the water evaporates in the heat. The mineral content is so high that NOTHING lives in it and it’s other-worldly to bathe in. You’d never want to get it in your eyes or mouth but it is fun to see how buoyant we are. I actually ‘sat’ on the water with my legs crossed as if I were on a pool lounge!  Somebody splashed near me and I got a couple of drops of water on my tongue - Yuck, it was like I had a tablespoon of straight salt in my mouth. Just a few minutes and I was definitely ready to exit. I was smeared with Dead Sea mud and hot as you-know-where!

I quickly showered and got dressed in the sweltering heat and returned to the air-conditioned bus. I can check it off my bucket list and I won’t do that again - at least not in this life!

One of the men in our group bumped his shin upon climbing aboard the bus. As he walked to his seat we noticed that he was bleeding profusely. We got him back outside and applied a pressure bandage but decided that the better part of valor was to keep the unknown wound covered and drive him to the hospital in Jerusalem, about 30 minutes away. There was what I might describe as an over-zealous nurse amongst us, so I backed off and let her manage the patient, who didn’t seem to be in any grave danger. When we got to the hospital, the ER team came out to take patient and nurse in and found a cut on his shin bone. It just happened to be right at a spot that had a varicose vein and he initially bled a lot. They didn’t do any stitching, simply bandaged it and sent him on his way.

So we’re in our Jerusalem hotel for the remainder of the trip; we’ll drive out and all around this area but stay in one hotel. Yay, no schlepping until next weekend when we head home.

Tomorrow we’re off to Bethlehem.