Pondering Some Wonders of the World

As I recollect why I started this writing this blog in the first place, it was to create a venue for conversation with my kids and grandkids about my mental pondering and travel activities that I thought might be of interest to them.  And, to be completely honest, I thought I'd finally found a way for me to enjoy journaling (and, I have).  On a minute-by-minute basis my brain wanders through fields of flowers and brambles; I’d like to share some of those expeditions in writing.  Alas, I am not a poet or a lyricist and I don’t often stick with one train of thought for very long.  But, some of the pondering in my head is in alignment with that of others; to make note is to invite conversation.
I’ve started keeping some of that pondering in written form, for whomever cares to hitch a ride with me on this magic carpet.  No two will share all the same  topics of interest; that's okay; they can come along for the ride or wait for another voyage opportunity.

Phases of the Moon
From time to time during this North American RV adventure I step outside Floribunda in the evening and notice / photograph the moon in whatever phase is present at the time.  It's made me think about “Phases of the Moon” in general.  Remember, I’m an Internet-surfing-junkie; this particular pondering took a couple of sprightly clicks and there’s more information than I can possibly cover in one lifetime.
Click on the image to enlarge. 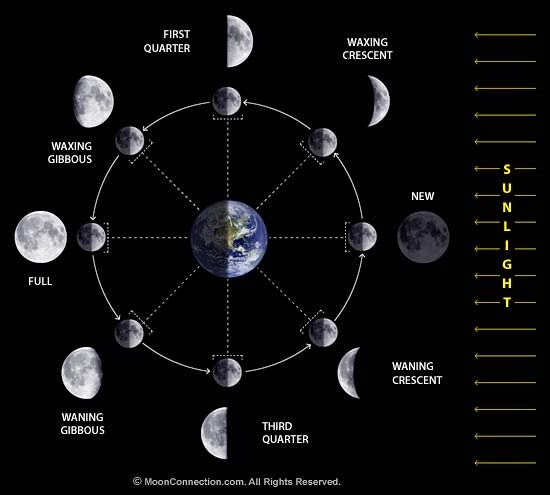 Looks complicated, doesn't it?  It’s really not . . .
With the Earth at the center of the diagram, notice the moon’s 8 key stages as it orbits around our planet.   Remember that the moon orbits the Earth and the Earth orbits the Sun.  Notice the sunlight coming from the right side of the diagram; an important detail to keep in mind is that exactly one half of the moon is illuminated by the sun at all times.  The various phases of the moon, as we see them, are dependent on the effect of the shadow the Earth casts on the moon at any particular time.  In reality, the shadowed portion of the moon, during its revolution around Earth, like the new moon, is not visible to us.  (It’s outlined for diagramming purposes only).
The dotted line in the diagram is a representation of our line of sight from here on Earth.  Voyagers in space would have a different perspective during their  travels.
For understanding the waning gibbous, third quarter, and waning crescent phases, you have to mentally stand on your head to imagine the line of sight; and, when you do you’ll notice that the illuminated portion is to your left – just as you see it in the image.
Phases of the Moon and Some Definitions:
Crescent:  refers to phases where the moon is LESS than half illuminated
Gibbous:  refers to phases where the moon is MORE than half illuminated
Waxing:  essentially means GROWING or expanding in illumination
Waning:  means SHRINKING or decreasing in illumination
New moon:  occurs when the moon is located directly between the Earth and the Sun.  The sun is illuminating the backside of the moon and we can’t  see it from Earth.
Full moon:  again the moon, Sun and Earth are in approximate alignment but the side of the moon that the Sun’s illuminating is facing the Earth and we see it brightly and clearly.  It’s the maximum illumination of the moon we can appreciate.
First quarter and third quarter moons:  frequently referred to as half moons, occur when the moon is at a right angle (90 degrees) with respect to the Earth and the Sun.  At these phases we’re seeing exactly half of the moon, while the second half is in shadow.
Once you understand those four key moon phases, the phases between should be fairly easy to visualize, as the illuminated portion gradually transitions between them.
Thus you can simply combine the two words to create the phase name, as follows:
After a new moon, the sunlit portion is increasing, but less than half, so it is waxing crescent. After the first quarter, the sunlit portion is still increasing, but now it is more than half, so it is waxing gibbous. After the full moon (maximum illumination), the light continually decreases. So the waning gibbous phase occurs next. Following the third quarter is the waning crescent, which wanes until the light is completely gone -- a new moon. 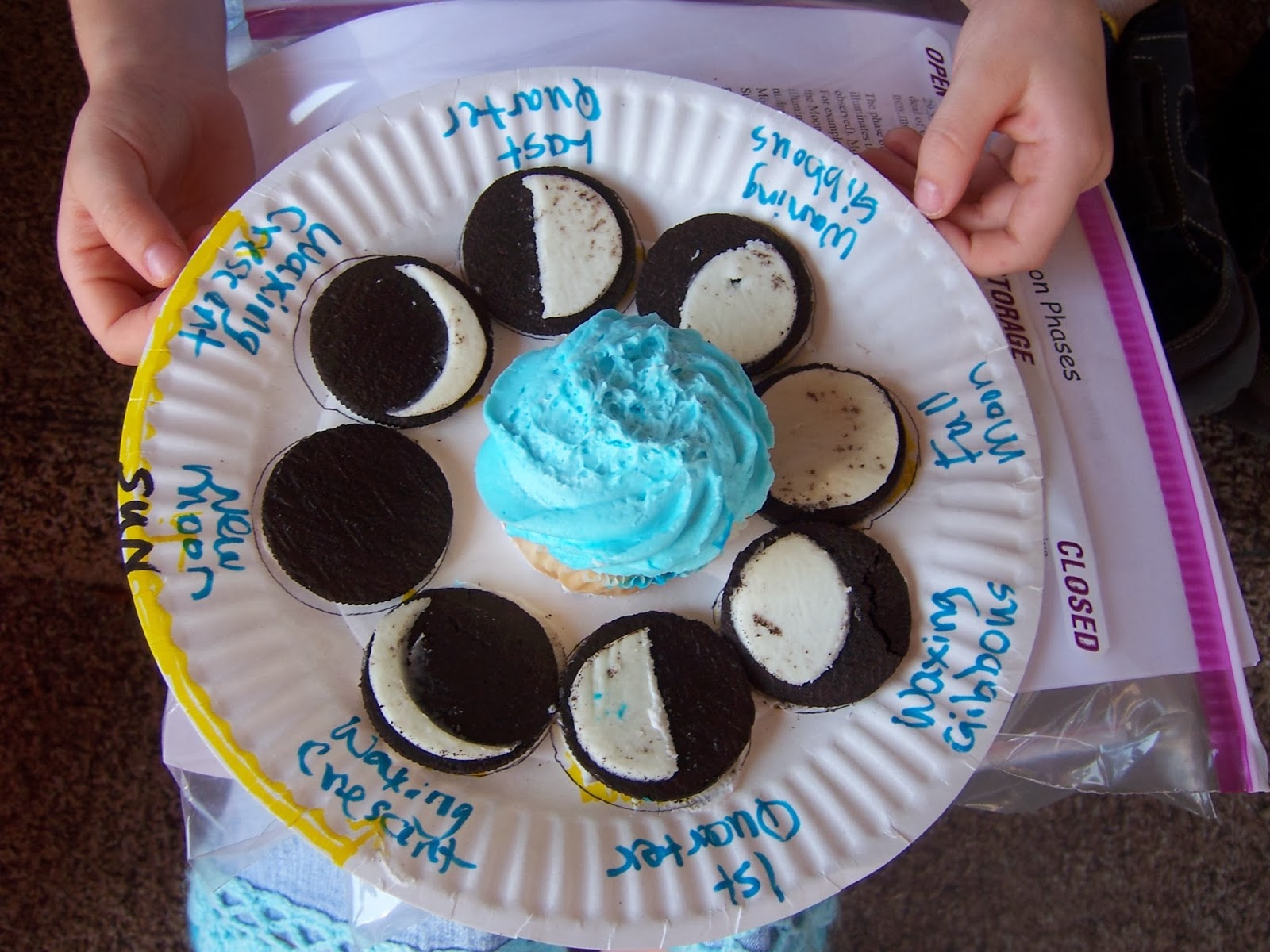 Here are the phases of the moon as depicted by Oreo Cookies!
To be continued . . . Have I lost you?

Lots of information for this post from MoonConnection, Wikipedia, Planets for Kids.