Doesn't Everybody Go Out For Cajun Music on Saturday Morning at 7 AM?

That's what we did Saturday morning.  I had to set the alarm as I'm out of practice getting up at 6.  Of course, I've not lost my innate ability to wake up two or three times during the night to see if it's time for the alarm!  Geesh!

A group of us left Betty's right at 7 for the 80 minute drive northwest to Mamou (that's Maaa- Moo).  Louisiana is a maze of state and county roads; there aren't a lot of freeways like we're used to around larger cities.  It's fun to drive drive through Cajun Country; it's almost a little like being outside the US - and I don't mean that in any negative sense.  The Acadian - Cajun culture is alive and well.

Our first stop for this outing was Fred's Lounge in Mamou 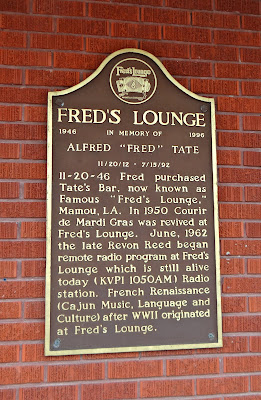 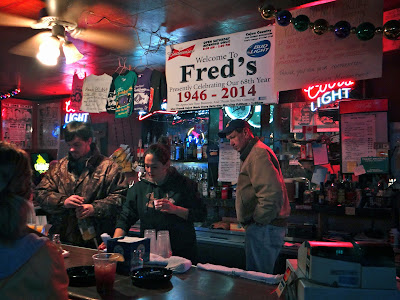 We'd been advised that if you want to find a seat you have to get there by about 8:30.  The Cajun Radio Show (KVPI 1050AM) begins promptly at 9 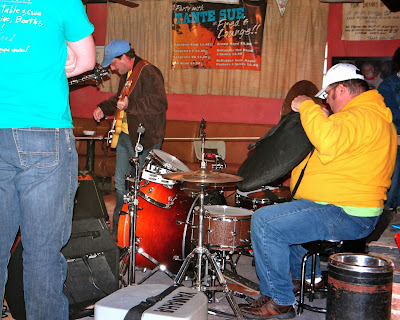 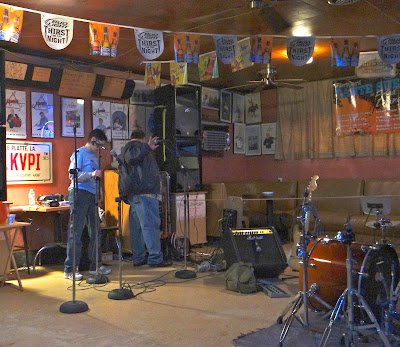 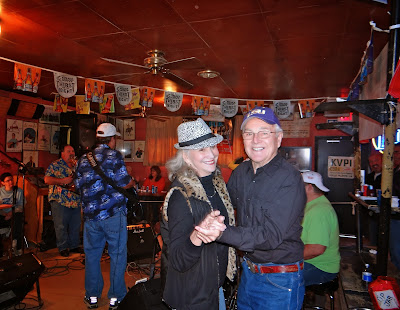 The band got started right on time.  It's absolutely impossible to resist
tapping your foot when that sound comes up.  And, the audience dances a kind of
Cajun two-step. When they very first started to play this gentleman, Jack, asked me to dance - Yikes, I didn't have a clue what I was supposed to do.  But, it was fun and he came back about four times, so I guess I didn't annihilate his toes too badly! 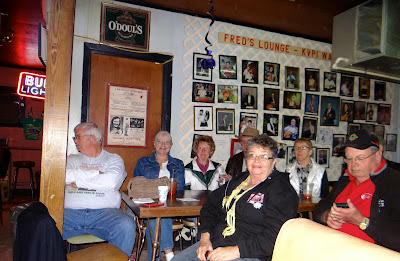 We kind of had to spread out so this is just part of the group - L to R:
Jay and Vicki (Washington state), Sharon and Wayne (Iowa).  Wayne's to the right of Sharon in the cowboy hat.  Next to Wayne is Doe-Doe, forgive my spelling (Kalispell, Montana) and in front of the table are Bobbi and Jim 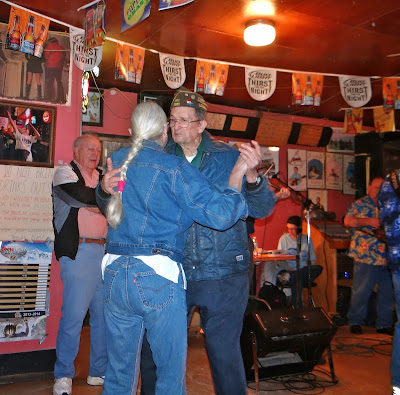 Here's Vicki dancing with a gentleman (88-years young with his VFW hat on) who
walked in using a cane, so Jay gave him his seat; and what did the guy do?  He asked Jay's wife,
Vicki, to dance with him!  No cane!! 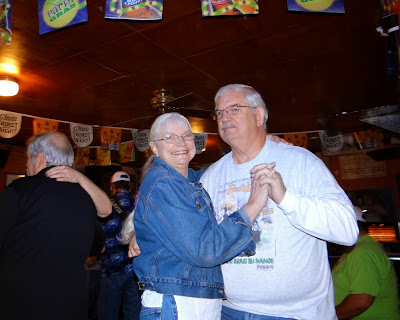 Well, Vicki thought that was fun so she got Jay to dance the next one with her 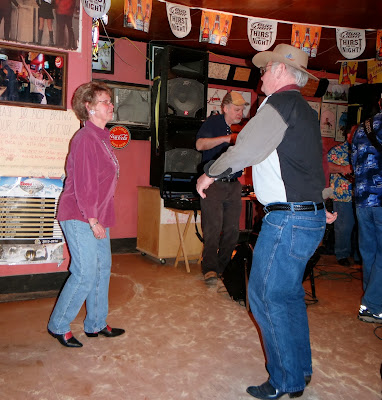 Sharon and Wane weren't going to be left out, so they
'cut the rug' with an Iowa version of the Cajun Two Step 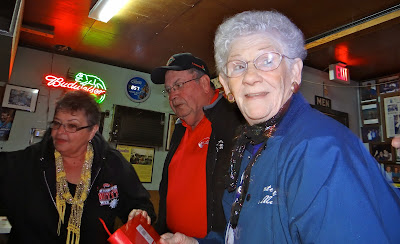 This little lady is Fred's widow.  Her name is Tante (French for "aunt") Sue.
She is alive and well, all made up and ready to be the hostess with the most-est
She has  a Guest Book and she carries it all around the place to make sure that
every single person signs it. 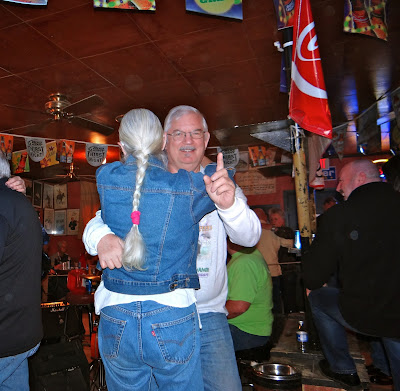 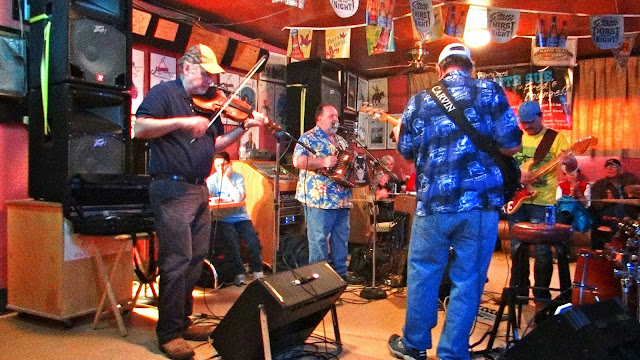 Here's most of the group - except the drummer.  And, the announcer is just
waiting for the set to end - to do a commercial and make announcements 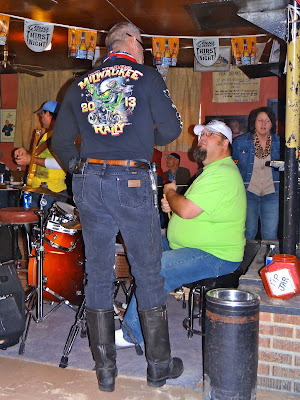 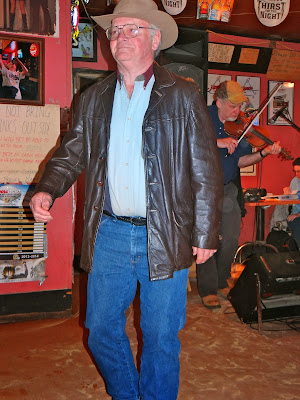 Well, we were sorry to leave but there was more to see; we left Fred's and stopped
at Charlie's Meat Market for their special "boudin" (that's pronounced: BOO' DAn -in French).
Boudin describes a number of different types of sausage in French, Belgian, German, Québec, Acadian, Creole, Austrian and Cajun cuisine.  The main type in Cajun country of Louisiana, I understand, is Boudin Blanc (white sausage).  There are as many variations as there are Cajun cooks, I suspect.
In doing a little online research, out of about 200 contestants, I found that Charlie's Meat Market's boudin is rated "A" which is VERY GOOD. 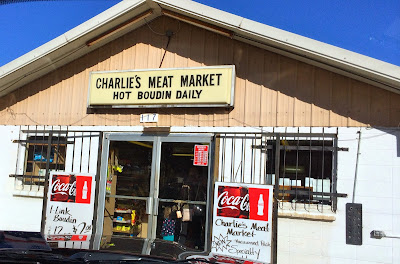 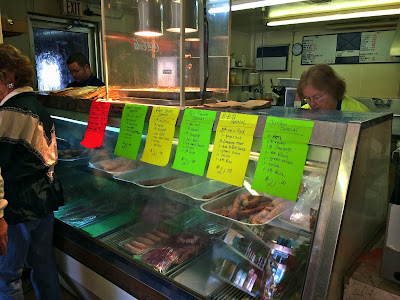 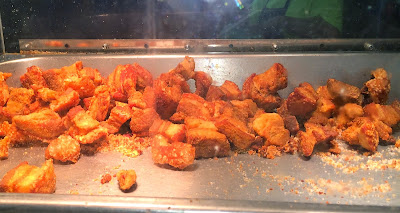 How about some pickled quail eggs to go with? 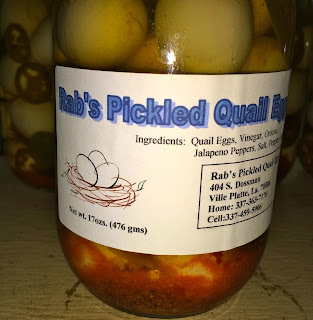 And, for other recipes, how about some roux for the gravy/sauce? 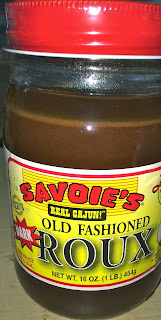 The seasoning section of the market - salt, black pepper, cayenne pepper and seasoned salt - that's all they sell and it's all you need! 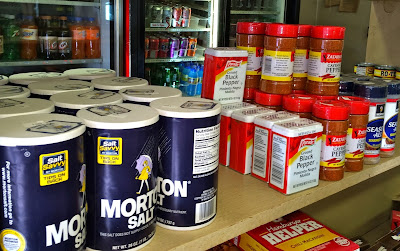 From the market we drove to Lake Front RV Park, in Eunice, where Jay and Vicki have moved, to check it out and have lunch.
Here are Sharon, Wayne and Ray (in foreground) devouring their boudin and cracklins
This is serious eating! 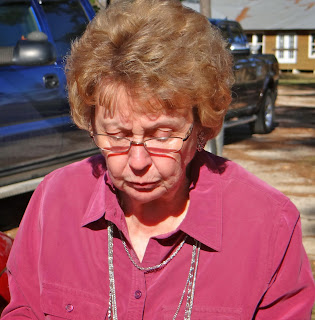 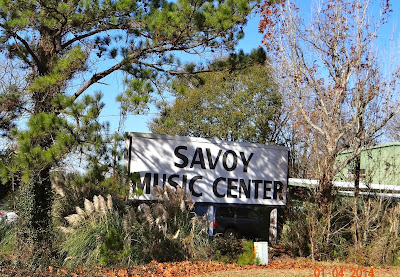 They have a Cajun music jam session every Saturday morning where the old timer greats of Cajun music jam and invite newcomers to join in.  Cajun music is alive and well.  Check out the younger jam participants.  The jam session is not for criticism but for encouragement for young musicians a regular opportunity to practice and play with the greats.
I counted 19 participants in this session.  The fiddler in the navy blue and white shirt on the left of the photo is Fred LaFleur, one of the original members 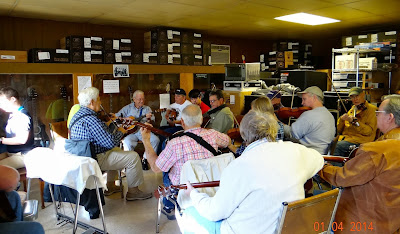 Here's another old-timers.  I didn't get his name but I heard him mention that he's 99 years young! 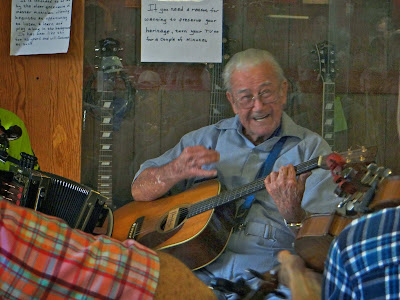 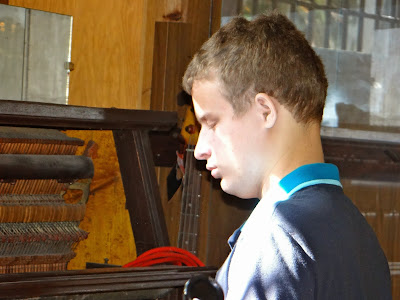 There was a gentleman and his son sitting behind me.  The 7-year old was keeping time to every piece on his triangle.  I turned around and asked his father, "Can he go up and jam with the group?"  His father suggested it to the boy and away he went.  He stayed up there with the group the entire time we were there.  I mentioned to his dad that he sure did have the Cajun music bug and his dad said his son had received an accordion for Christmas, but that his real love is drums.
Here's the little guy with next to a talented teenaged accordionist and behind Fred LaFleur, fiddler. 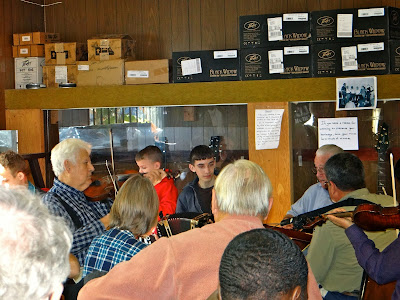 What concentration!  And he didn't miss a beat! 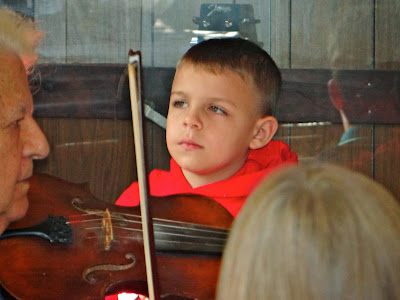 What a wonderful experience we had.  It was truly what I'm looking for on this North American adventure - learning about these magnificent places we call HOME.

Later in the day, at happy hour, a group of us got into a discussion of the word CREOLE.
Here's what I found in the dictionary