Last evening a large group of us at Betty's RV Park went into downtown Abbeville to River Front, a seafood restaurant.  I guess our group had about 16 people.  The waitress came around the table to take each order and asked if we were alone or in a couple; she asked me and I said "Single."  Then she asked for my name and I answered, "Mary."  well, the rest of the evening she called me "Miss Mary" - a very southern honorific appellation.  And, she never forgot to call me that all evening - pretty nice custom, I'd say.

Kristi and I shared a crab cake appetizer, followed by Grilled Shrimp Angelo - grilled shrimp on a bed of angel hair pasta.  I had a nice bottle of O'Douls along with my dinner  The restaurant is right on Vermillion River and directly in front of the dining windows is a draw bridge that was put to use as we ate.  I ran out to take some pix with my iPhone; they're not good but I was excited to see the bridge in action. 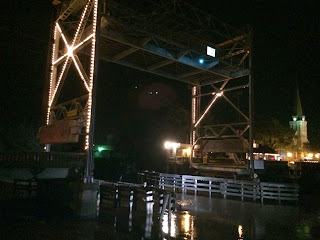 This is a little different type of draw bridge from what I've seen before.  The center section lifts up quite high but remains parallel to the surface of the water 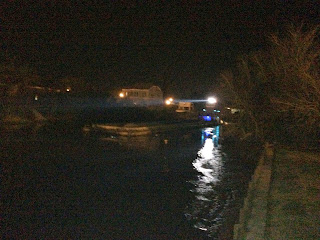 The barge was very long with the spot light located on the bridge (of the barge).  The really long flat looking area preceding the bridge looked like it would be for carrying rice or the like

I just couldn't stay out there to watch it go all the way through; it was cold and I wasn't dressed properly

Betty had given me the name of a dog groomer right here in tow; so I made an appointment for Lacy for this morning.  This picture doesn't do her 'doo' justice but she looks very pretty and was a hit at the grooming shop.  They only charged $40 for the whole works; she smells like a French perfume company and always seems to know she's hot stuff after she's 'suffered' through that phoo phoo-ing 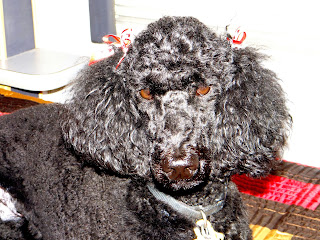 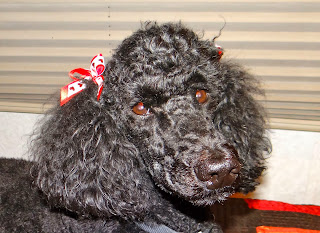 Also, today we had to say 'good-bye' to Vicki and Jay and their dog, Athena, who live in the State of Washington when they're not adventuring around the country.  They traveled all of 50 miles north of here to another supposedly great RV park.  I may even have to check it out.  It is quite a production when they move on.  They have a monstrous semi- rig - you know, the ones with the little apartment behind the driving area.  Then behind the huge truck they actually have a storage building built on the truck bed - In the storage building they carry their vehicle.  So, while they're parked they don't use the huge truck at all.  We all headed out to watch them get everything hooked up and sent them on their way with hugs, cheers and lots of waving.  The whole rig and fifth wheel trailer measures 73 feet long! Now, that's just about enough room for 3 Floribundas!

We've had quite a bit of rain in the last few days, but today dawned sunny with clear skies; but it's cold again.  Right now, it's about 30F outside.  Ch-ch-chilly!

Tomorrow morning we're all gathering at 7AM to car pool to a town called Mamou, Louisiana, about an hour and a half from here.  We're going to sit in the audience of a live Cajun radio Saturday morning show.  Those in the know say we have to get there early to get good seats.  Sounds like fun and I hope to have some photos.
Posted by mps2343 at 8:29 PM