A Short Tribute to Quinn

My oldest granddaughter is Quinn Kathleen.  She passed the quarter-century mark last January.  Just the other day I received a current photo of her and her honey, Landon, and thought I'd tell you a little about her.

My daughter, Kari, was living in Scottsdale, AZ, working for America West Airlines when she met her future [first] husband.  They were married in San Francisco in 1987 and by the time Quinn came along in 1988, Kari was a single mom, working for America West Airlines in Phoenix.  Quinn was born on 1/22 at 1:22 in the afternoon at the hospital where I worked in Marin County, California.  Kari and Quinn stayed with my husband and me for a few months; then Kari returned to work in Arizona with her bundle of joy.

Oh, what a precocious child was Quinn.  She was the included youngster in Kari's extended group of married and single friends and relatives.  I remember going to Quinn's 1st birthday party that was attended by hordes of airline people - all of whom were 'friends' of Quinn!  I'm so proud of my daughter and how she raised that little girl - to know that she was loved, important and secure.  Quinn blossomed and reached out into the world knowing that life is a great adventure and definitely worth living to the fullest.

Someday I'll complete that book of short stories for, and about, my family.  Here's a short one about Quinn ....

My husband and I had a ranch about 200 miles north of Marin County, near Redding - a weekend getaway for us, our family and friends.  We'd raised our kids to be independent - and they were.  At that time, our three kids lived in three different states.  Anyway, after Quinn's birth and Kari's return to her job, working for the airline, we were able to visit back and forth with much regularity due to the free or $5 air tickets.  I experienced Quinn's first years up close and personal.

As Kari was often gone for two or more days at a time, she had excellent child-care for Quinn, supplied through the airline.  And, Quinn started 'nursery school' at a very young age.  That, and the fact that she was precocious to begin with and spent lots of time in the company of adults, led to her spoken- language abilities being pretty extraordinary.

On one occasion, when Quinn was a couple of months over 2 years old, she and Kari had flown in to visit us on the ranch in Red Bluff.  As I was driving them back to the airport at the end of the visit, Kari and I were in the front seat of the car, talking away about this and that.   Quinn was in her car seat in the back, listening to us until she got bored with our topics of conversation.

All of a sudden Kari put her finger to her lips "Shhh," for me to listen to what Quinn was saying ....

"I pwedge aweegence to the fwag of the nited States of Amerca.  An to da wepublick for wich it stands ...."  Yes, she went on the recite the entire Pledge - with her hand on her heart.

There are lots of stories; this is just one.  Quinn went on to be an excellent student, Girl Scout, high school national champion-type cheer leader, History major graduating in December of 2010 from Cal Poly in San Luis Obispo, CA.  She now lives in Campbell, CA and is a manager for her company, Aero-Tech.  She leads a team in procuring professional and technical employees for specialized companies.  She's been dating Landon, whom she met in high school, but didn't know well until they met again a couple of years ago.  I expect we'll be hearing about future plans for these two almost any day now.

I introduce you to Quinn and Landon ... 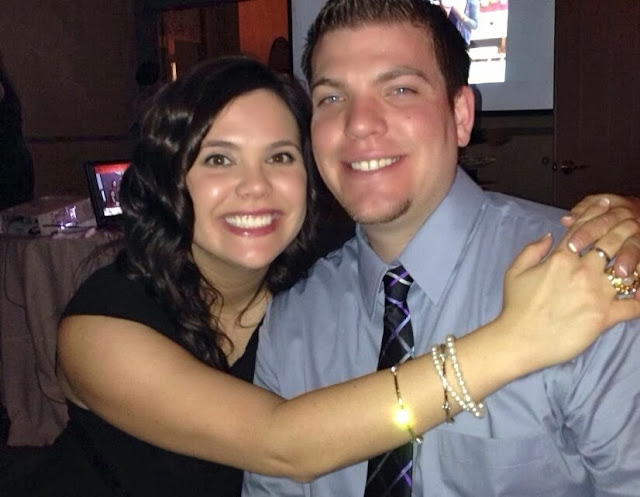