Huntsville, Sam Houston and Other Things

First of all an update on my reading this week.  I interrupted the last ten pages of the third of Jeffrey Archer's Clifton Chronicles to check out the blogs I follow and post this addition to my Butterflies blog.  The Clifton Chronicles are very good reading.  For those not familiar with Jeffrey Archer, he's an British Baron, author and former politician with a rather checkered political career, including a little prison time in 2001.  I've been a fan since reading Kane and Abel in the late 70s, one of my all-time favorite novels.  The Clifton Chronicles, to date, include, Only Time Will Tell, The Sins of the Father, and The Best Kept Secret.  I understand that the fourth in the series will be published early next year.  When I get my Library Page going they'll be included.

It's been COLD (again) here in Huntsville; I've been reading several blogs of fellow travelers in this neck of the woods, whose plans have been interrupted by this cold snap so early in the year; after all, Winter hasn't begun!

Yesterday, I braved these cold and drizzly ( thank God, not icy - yet) conditions to drive about 45 miles to Huntsville, Texas, a community almost due west of here that is the resting place of Sam Houston.  So, I've known the  4th largest city in the US, Houston, and the name Sam Houston as having to do with the state of Texas; but I thought I'd pull my knowledge base up a notch or two before posting about my visit to Huntsville.

Just Who was Sam Houston? 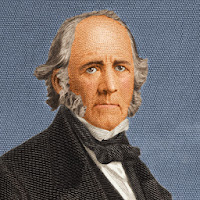 Samuel "Sam" Houston (March 2, 1793 - July 26, 1863) was a 19th-century American statesman, politician, and soldier.  As I read about his life, political accomplishments and downfalls, marriages, et al, I realized that one could spend many years trying to piece together all the information that has been published to describe this complex man who ws so instrumental in the formation of the State of Texas.

He was born in Virginia, of Scots-Irish descent; his family migrated to Tennessee; he spent time living with the Cherokee Nation (into which he was adopted as a citizen and later married Cherokee woman) in that state.  He did military service in the War of 1812; after which he became involved in politics and was a strong supporter of Andrew Jackson, who became his mentor.  During his residency in Tennessee he served as a U.S. Congressman and was elected Governor of Tennessee in 1827.  For political reasons he resigned as governor and  relocated to Arkansas Territory.  There, in 1832, he had an altercation with a U.S, Congressman having to do with politics and the Cherokee Nation, followed by a well-publicized trial.  From Arkansas, he relocated to Coahuila y Tejas, then a Mexican state, and became a leader of the Texas Revolution.  He supported the U.S. for annexation of Texas by the United States and signed the Declaration of Independence of Texas in 1836 and was a prominent leader in the battle for statehood.  Texas became the   state of the Union on December 29, 1845.   In 1859, Houston became the seventh governor of  the great state of Texas.

He married three times, fathered at least 8 children, and has the claim to fame of having been governor of two US states as well as a foreign state (Mexico). 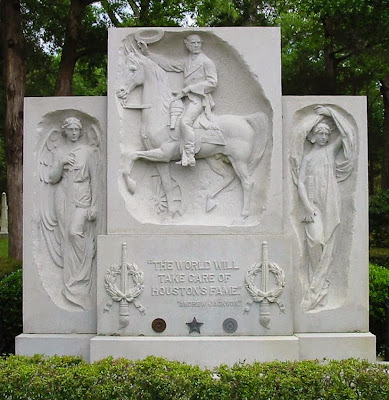 Yesterday was gray, gray, gray - no beautiful blue skies to be found; but this part of Texas has a late display of Fall colors mixed in with still-green lawns and fields

Lots of tree color and some deciduous trees are still green 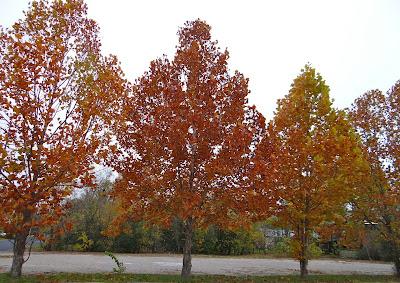 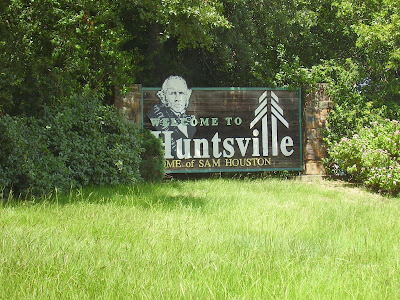 A short distance outside of town is Huntsville State Park; this is Lake Raven in the day use park 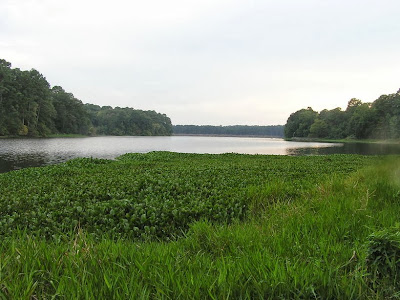 Huntsville is a city of just under 40,000 residents, located about 40 miles north of Houston on Highway 45 and is the seat of Walker County, Texas.  It  is home to Sam Houston State University and the headquarters of the Texas Department of Criminal Justice (TDCJ), which operates state correctional facilities for adults.  The prison system in Texas has been headquartered in Huntsville since Texas's founding as a republic, and it's the only major state agency not headquartered in Austin, the state capital.

On a sinister note, Huntsville has a well-known reputation as a location of executions and has been referred to as the "Death Penalty capital of the world."  It has the highest number of state-sanctioned executions of any place in the USA.  Between 1977 and 2012 inclusive, 492 of all 1,320 legal executions that occurred in the US were in the city of Huntsville.  Yikes!
I'd thought about visiting the Prison Museum, but when I got cold I decided to forego that visit.

All day yesterday there was a Christmas Faire going on on the main street.  I drove around the blocked off areas, but didn't actually take a walk through town to join in the festive, but cold, atmosphere.  I did take a good look at Sam Houston State University that houses the Sam Houston Memorial Museum and the university grounds and park-like atmosphere

This is the Educational Center of the Sam Houston Memorial Museum 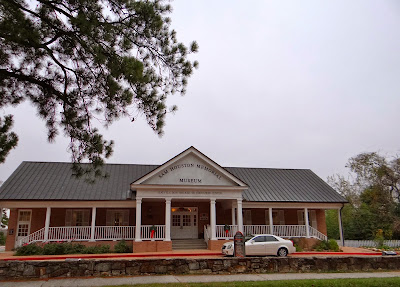 This is the entrance to the Museum itself.  It was getting ready to close so I just peaked into the rotunda where it was outfitted with a large Christmas tree and lots of seasonal decorations. 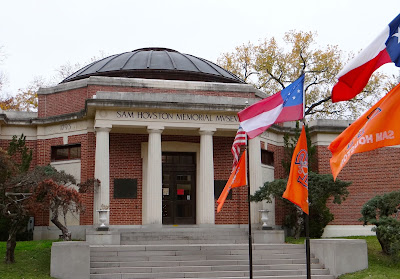 On the left, above you see this plaque that says:  "In the promotion of my country every energy of my mind shall be employed with a fervent invocation to the god who buildeth up nations that his wisdom may direct us in honor and that the people of this nation may be established in virtue in prosperity and in happiness" 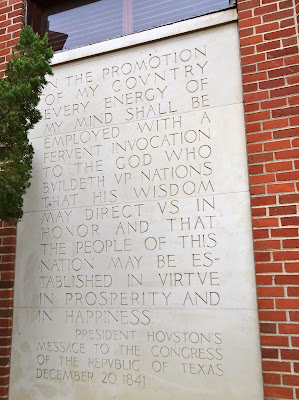 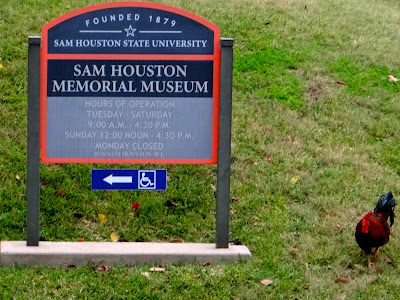 Starting at this point I followed groups of ducks and chickens around the grounds and pond at this beautiful University and Museum setting.  As I keep repeating, IT WAS COLD - about 31 degrees.  But these fowl are among the healthiest-looking I've ever seen. 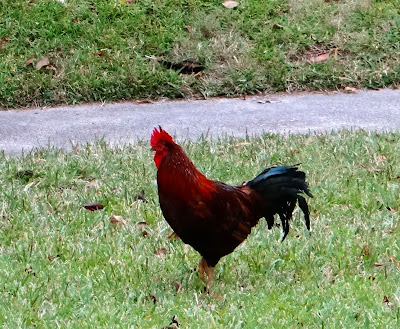 Anybody know what species of duck this is????? 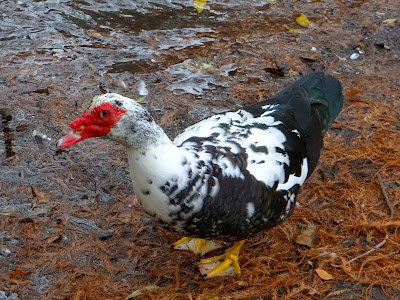 Of course, all the fowl were very brazen; they're used to treats from students and visitors 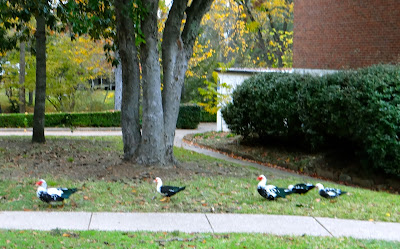 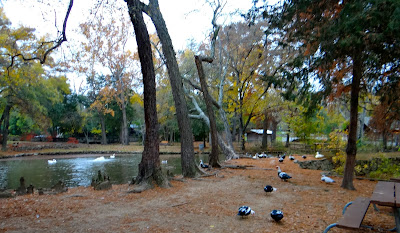 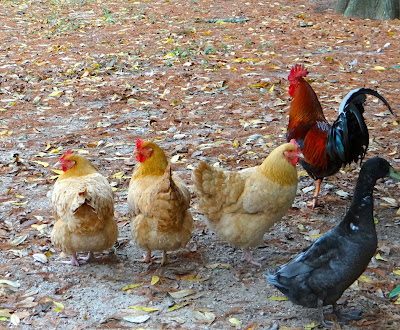 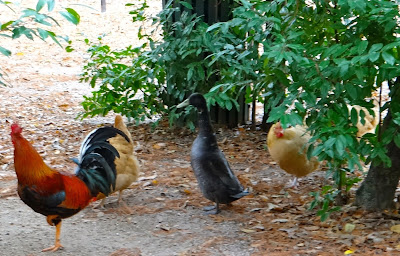 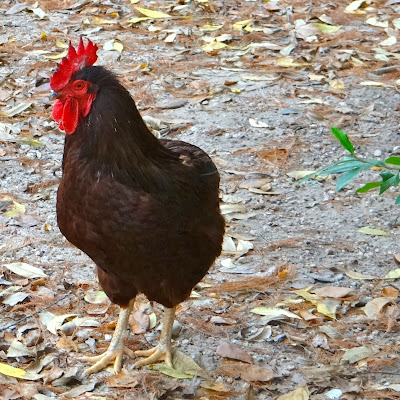 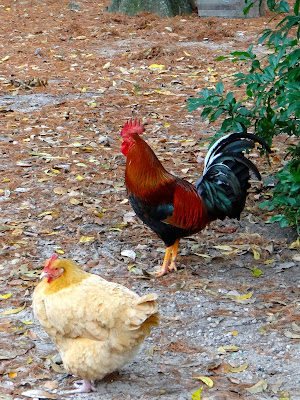 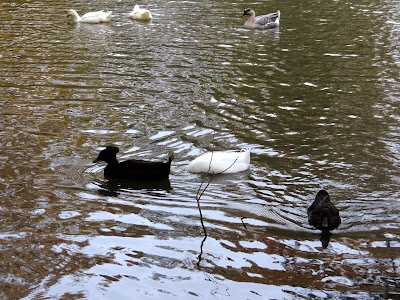 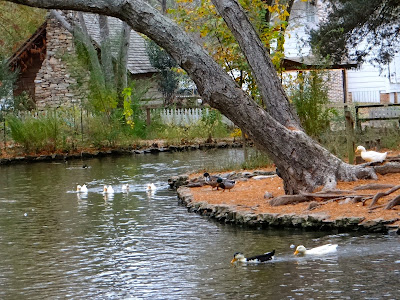 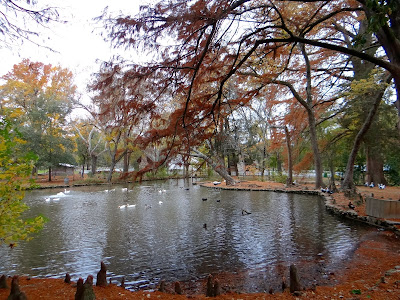 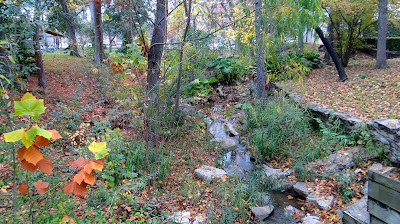 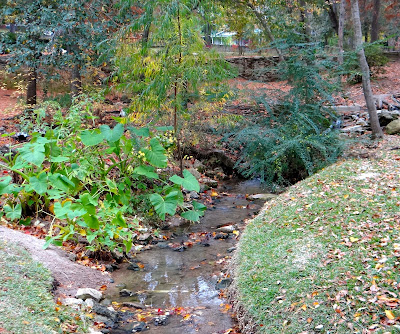 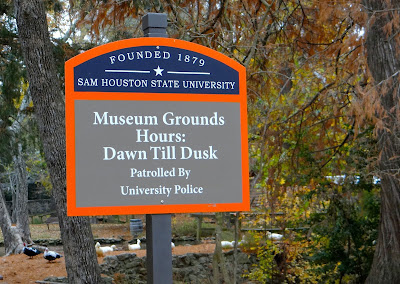 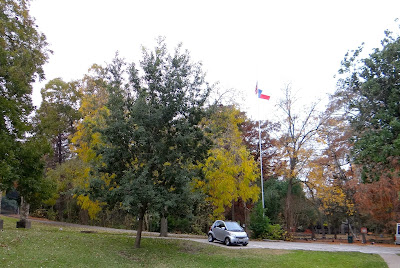 Background information found surfing the web and especially wikipedia.  If you're a fan of wikipedia, I  notice that they're asking for donations to keep the web encyclopedia going.

Wikipedia and its fellow sites are hosted by the Wikimedia Foundation, a non-profit organisation based in the United States. Sites like Google or Yahoo are hosted on thousands of servers, with thousands of employees; we have around 800 servers and 150 staff, and cover our costs through donations—almost all from members of the public.
If you're interested in donating to Wikipedia, you can do so here. If you've got questions about where your money goes, what we spend it on or what our plans are for the future, you can find out here. Should you have any problems donating, or other questions, please email donate@wikimedia.org .
Posted by mps2343 at 2:31 PM