Checking in again, from where I left off this morning . . .

Remember, I said Lacy was my welcoming committee when I drove into the Tumble In after several hours out and about in Marfa yesterday.  When I drove in, I really wanted to take it easy and enjoy a cool drink.  I kicked off my shoes and jumped on my bed to stretch out and relax; when, for whatever reason, I decided I'd better check the McDonald Observatory brochure one more time to make sure that all the advertised events would be available on Sunday.

OMG!  In small print several paragraphs down the page it said that the Star Party is only offered on Tuesday, Friday and Saturday evenings!  Yikes.  I quickly called the information number at about 4:20 to ask if I could make it there in time for the start.  The young man assured me I could make it for the Twilight Program at 6PM and the Star Party a little later.

I quickly fed Lacy and Eleanor, gave Lacy a little potty stroll and changed into "warm clothing" that the pamphlet says to wear, no matter the time of year.  The gentleman had told me it would be a good idea to pay online for at least the Twilight Program - "It's less expensive if you pay online," said he.

I tried to do just that but found I wasn't able to enter any credit card info; I didn't want to tarry so I gave up and hopped in Petunia at 4:45 for the approximately 45-minute drive.  As I've mentioned earlier, this was the second time I'd made the trip up the mountain.  I realized now that I'd actually gotten to within a couple of miles of the parking lot; and, yes it would have been possible to park both Floribunda and Petunia there.  Oh well, live and learn! 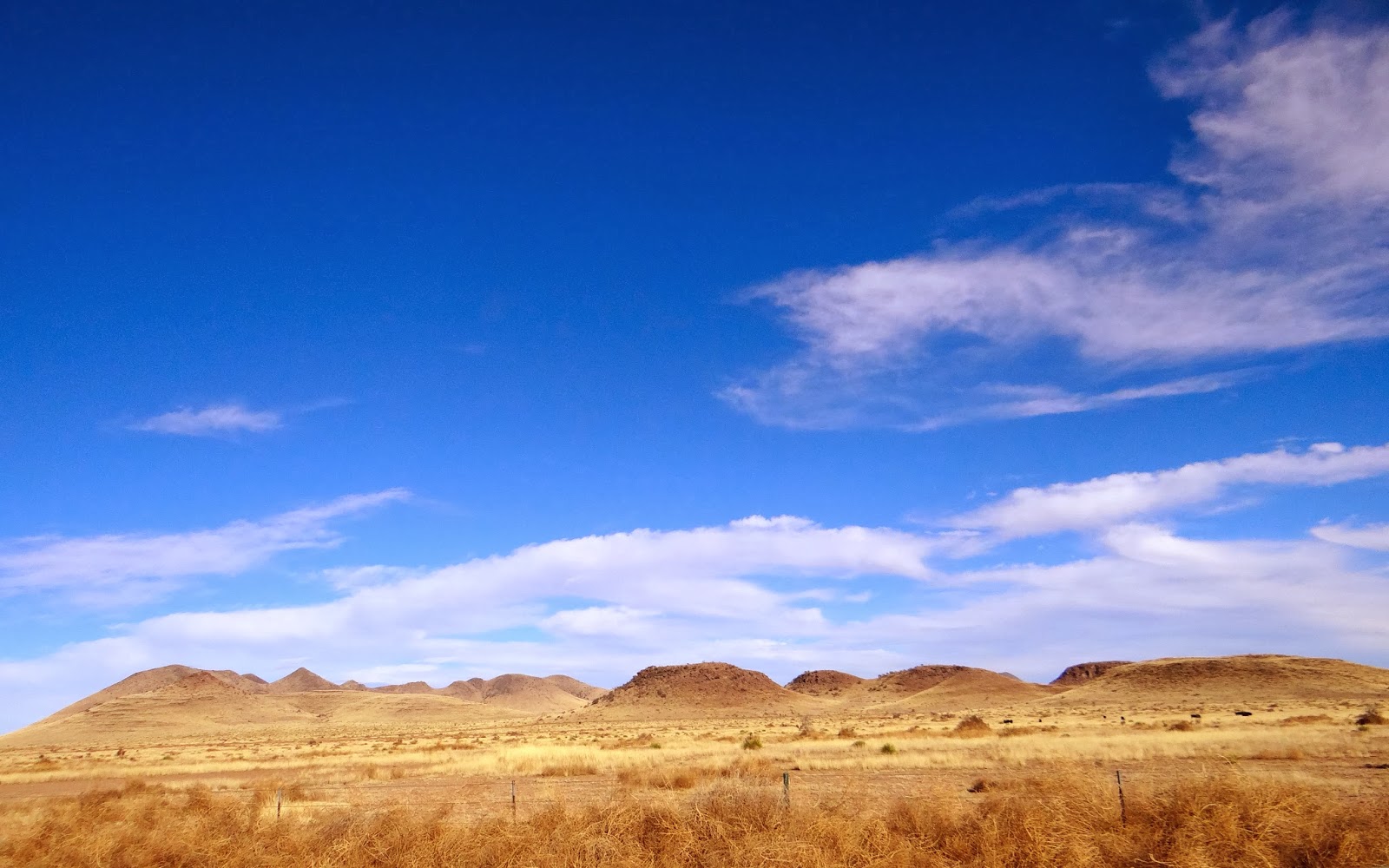 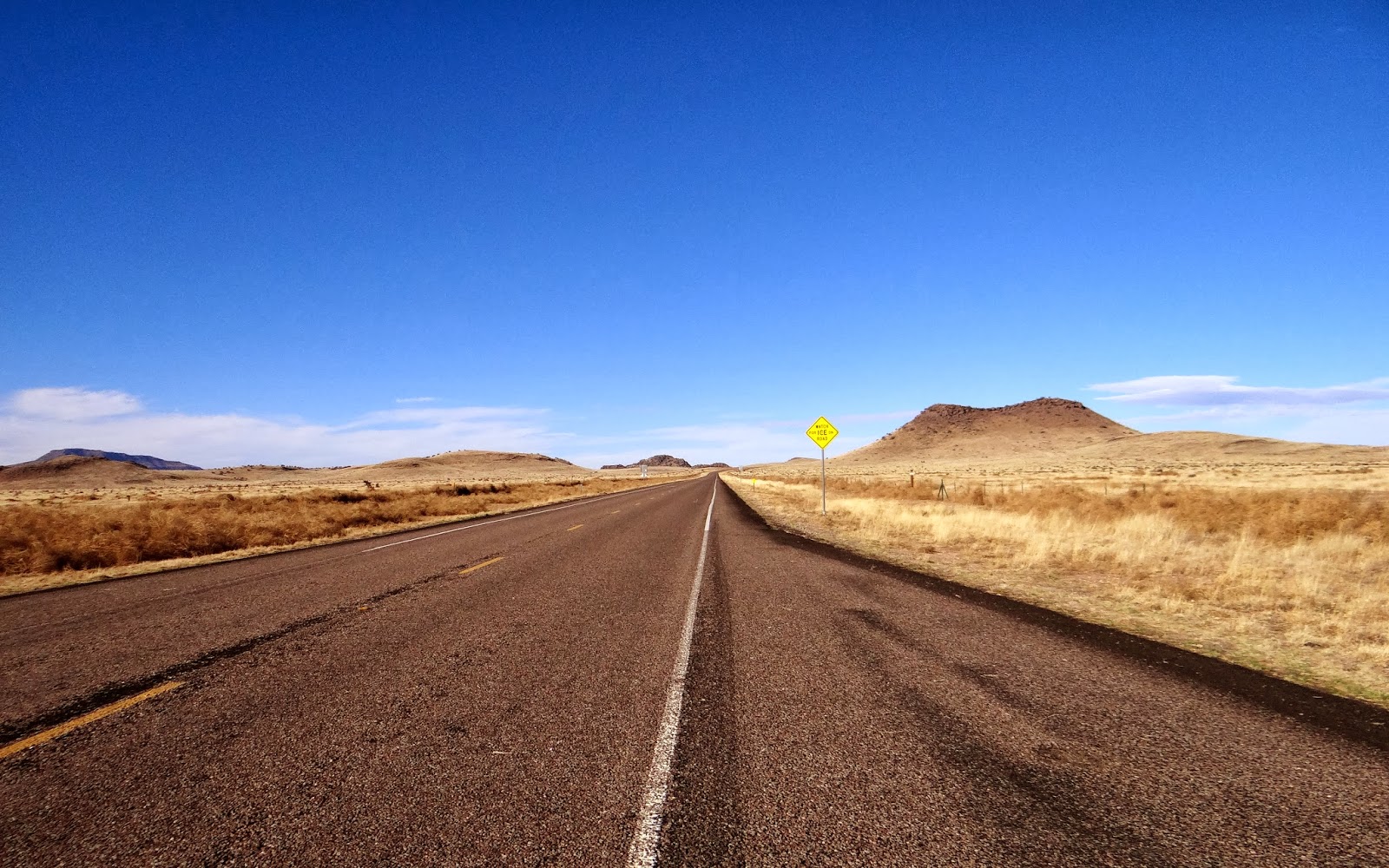 Taken standing in the same spot, looking the opposite direction 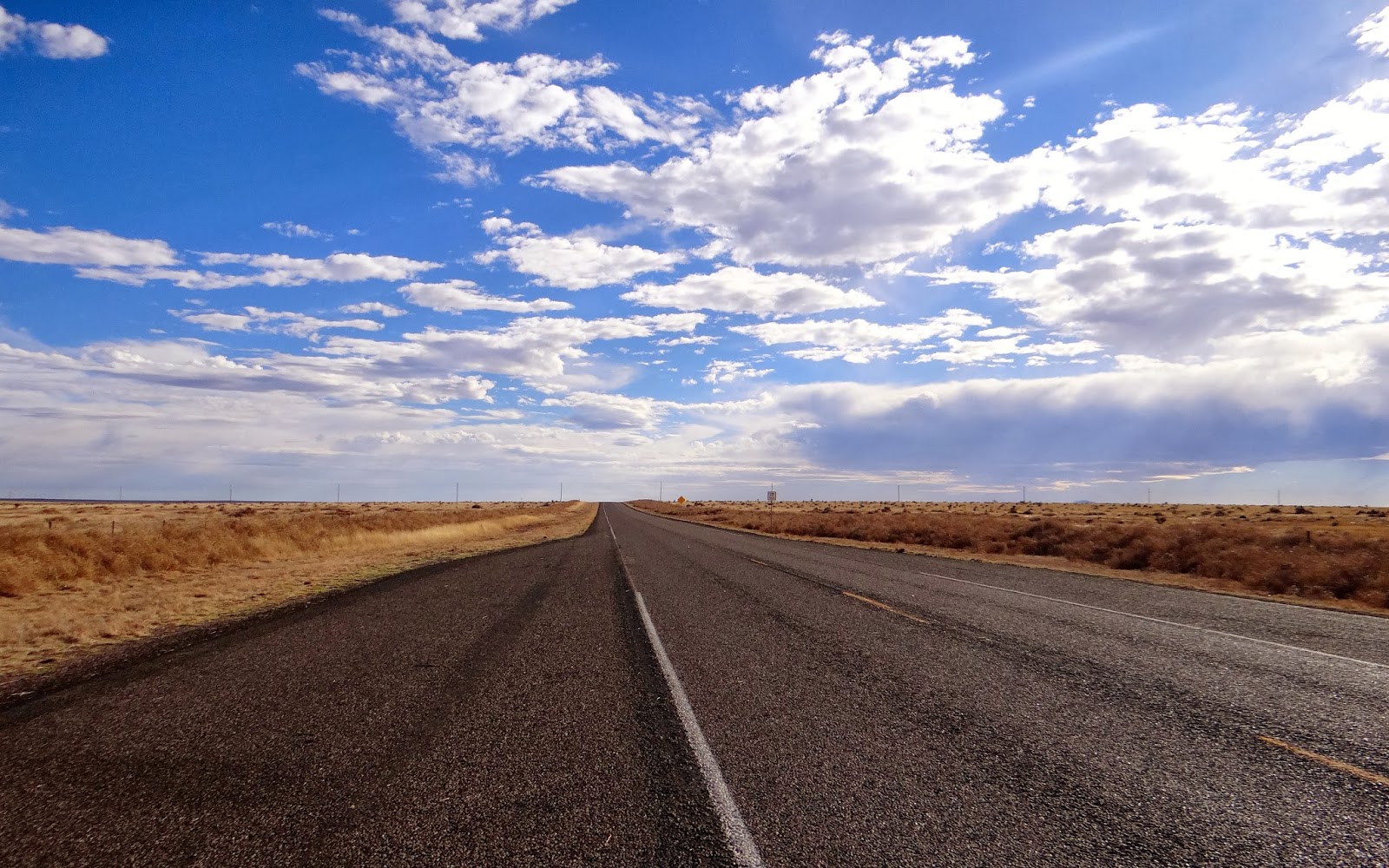 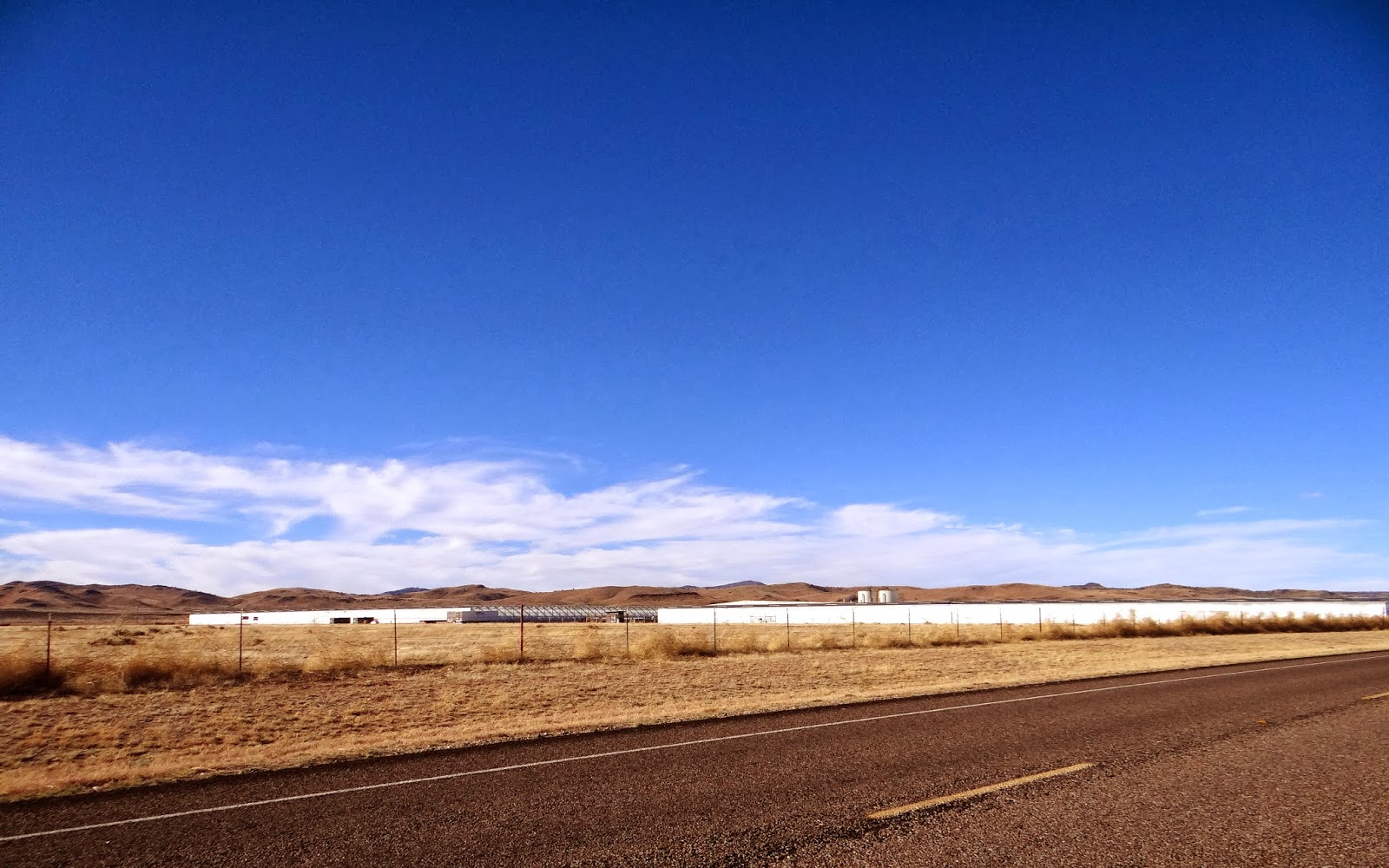 Just one quick shot taken from Fort Davis to indicate the change in the landscape that's coming up.  See those rocky outcroppings? 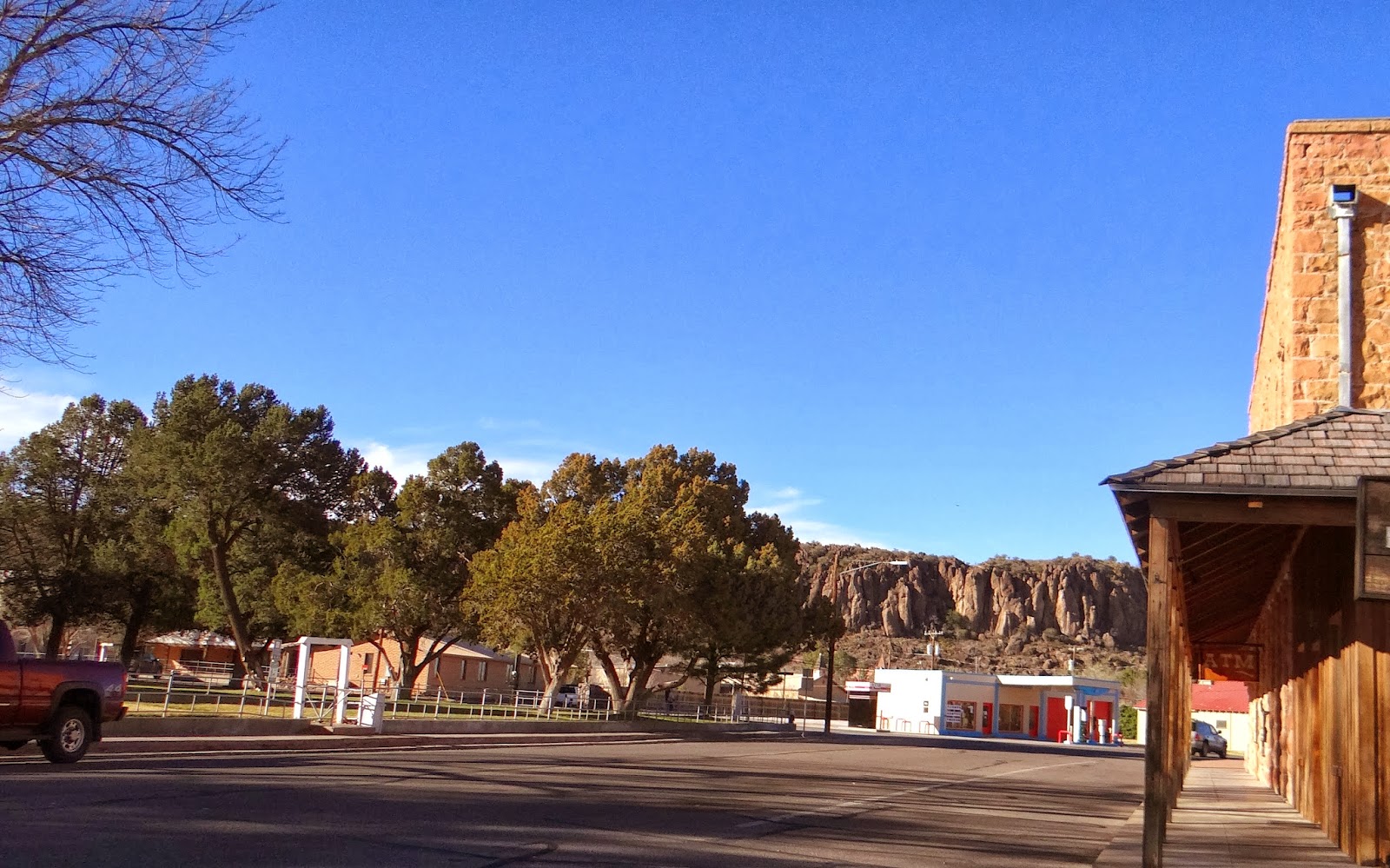 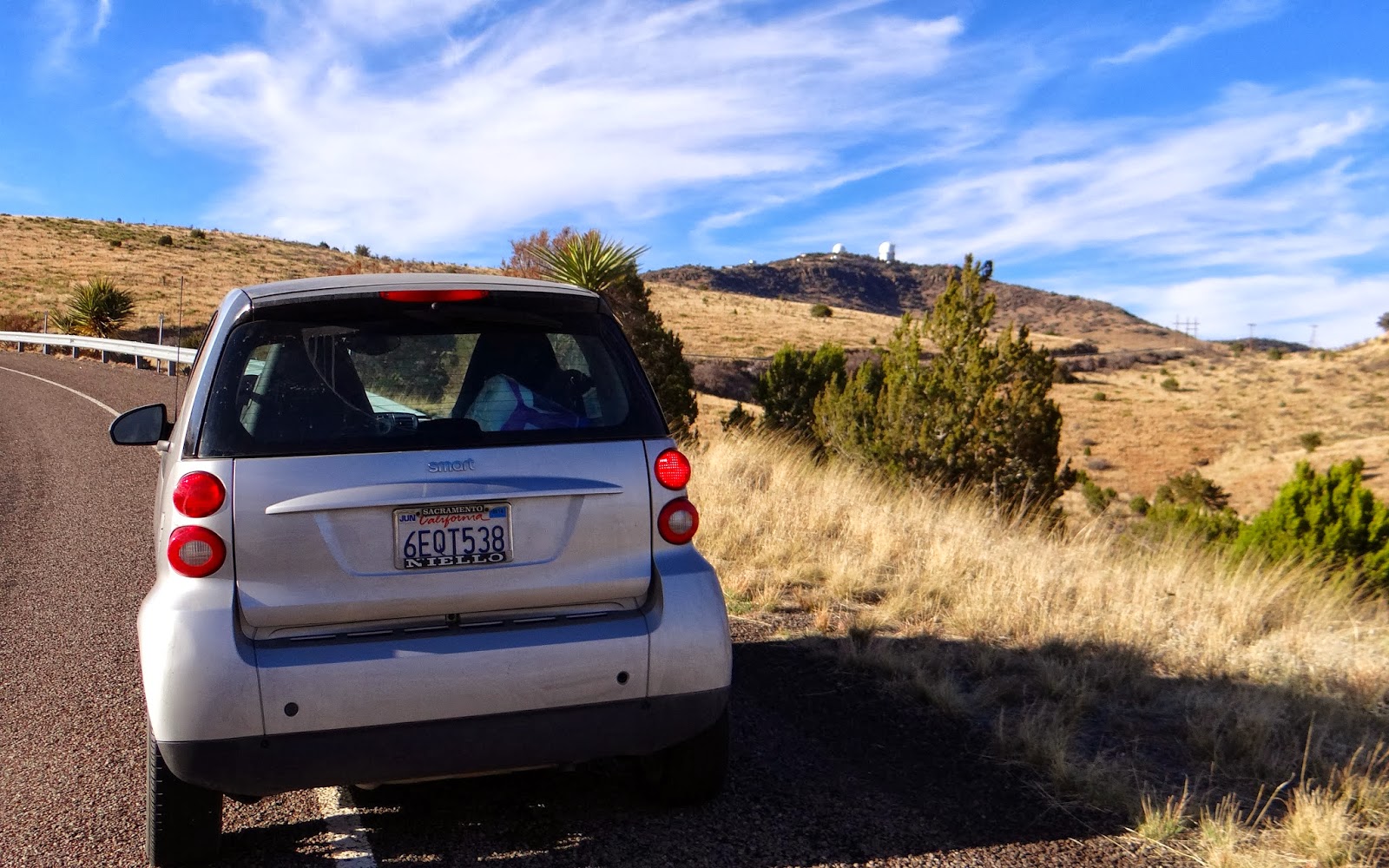 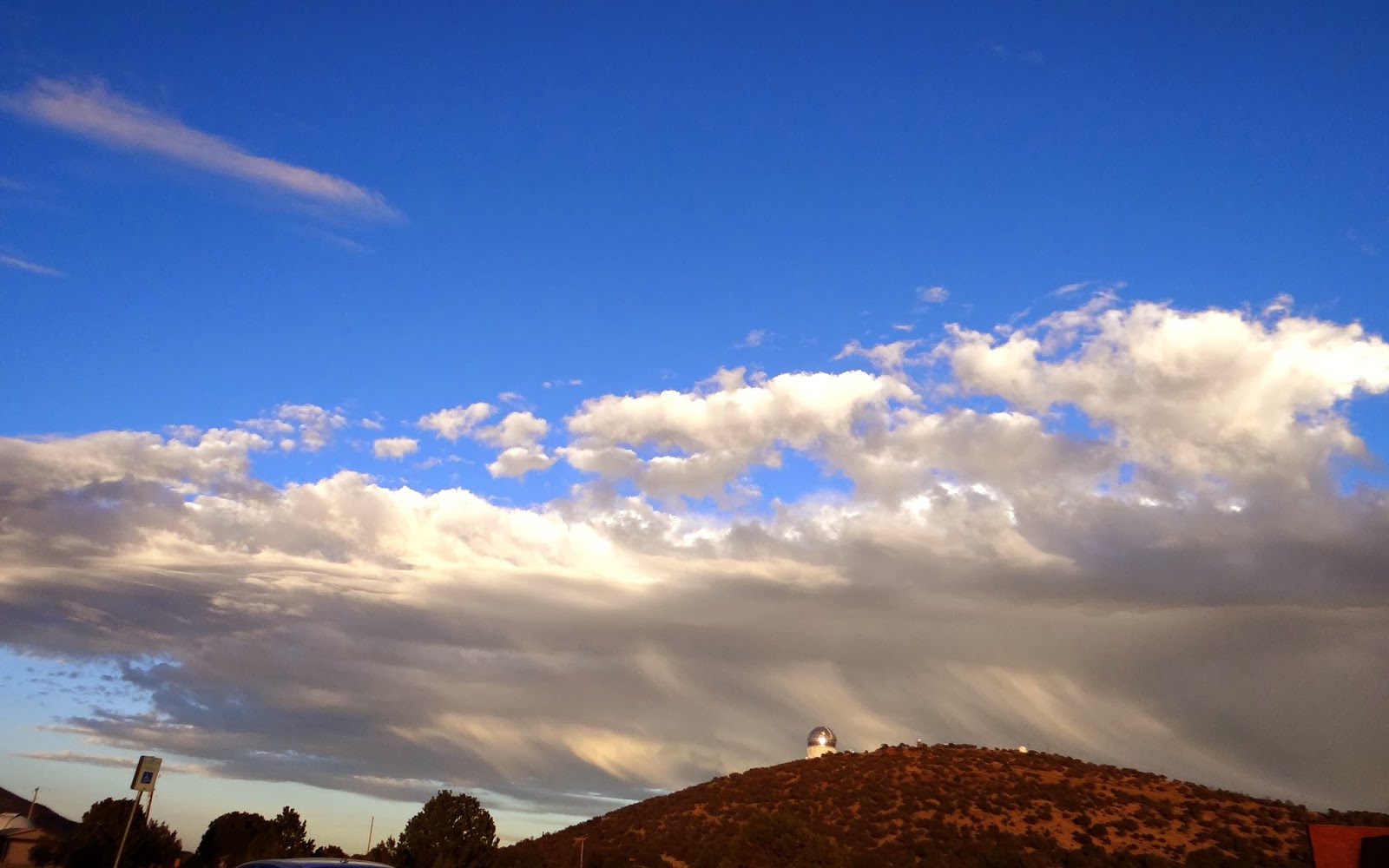 Entrance to the observatory 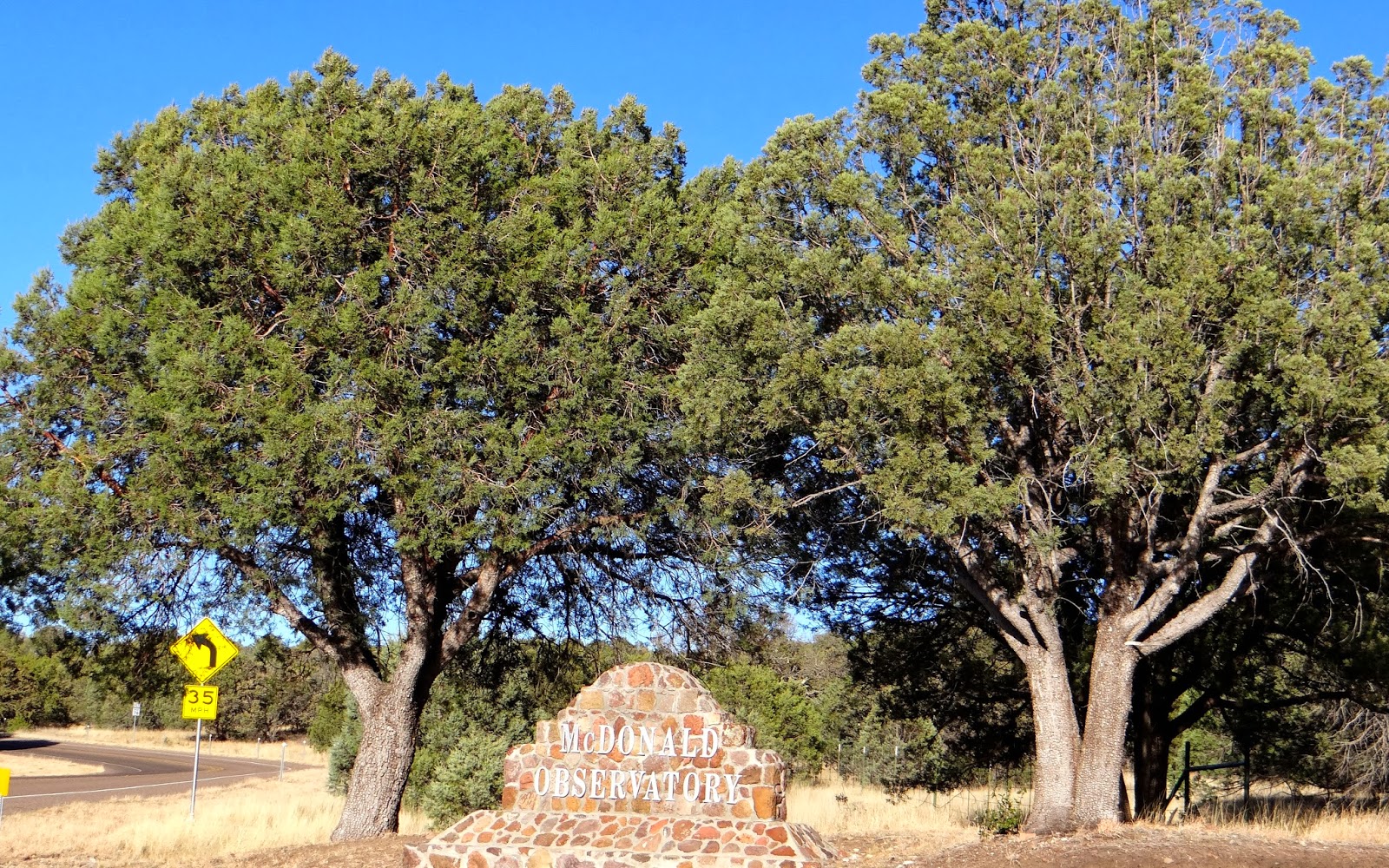 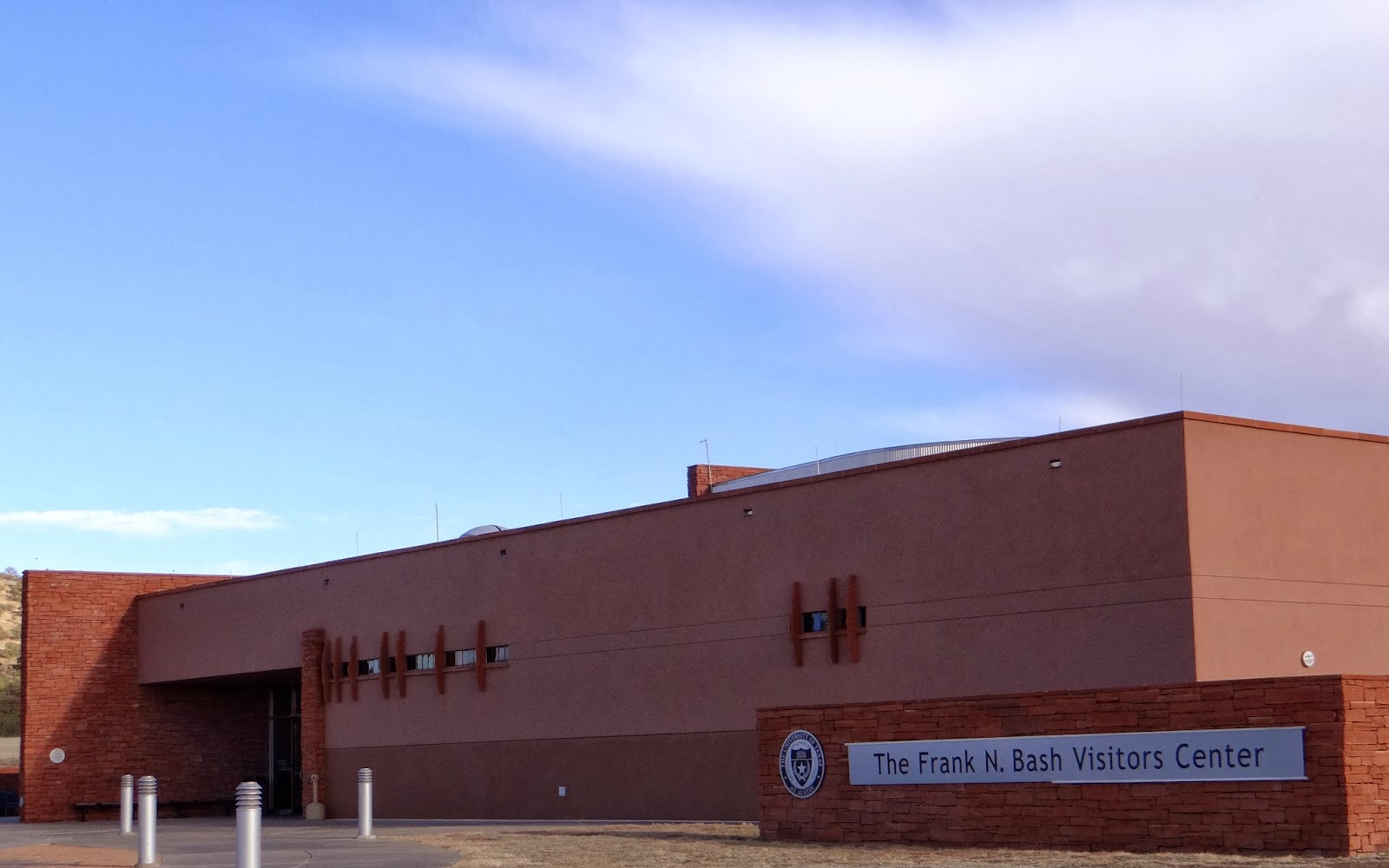 I drove into the parking lot at the Frank N. Bash Visitors Center right at 5:30 but, when I asked the cashier if I could buy a ticket for the Twilight Program, an hour-long workshop that is designed to make one's Star Party experience more meaningful, she explained that it was "sold out."  So, there I was with two hours to kill before the Star Party was to begin at 7:30. 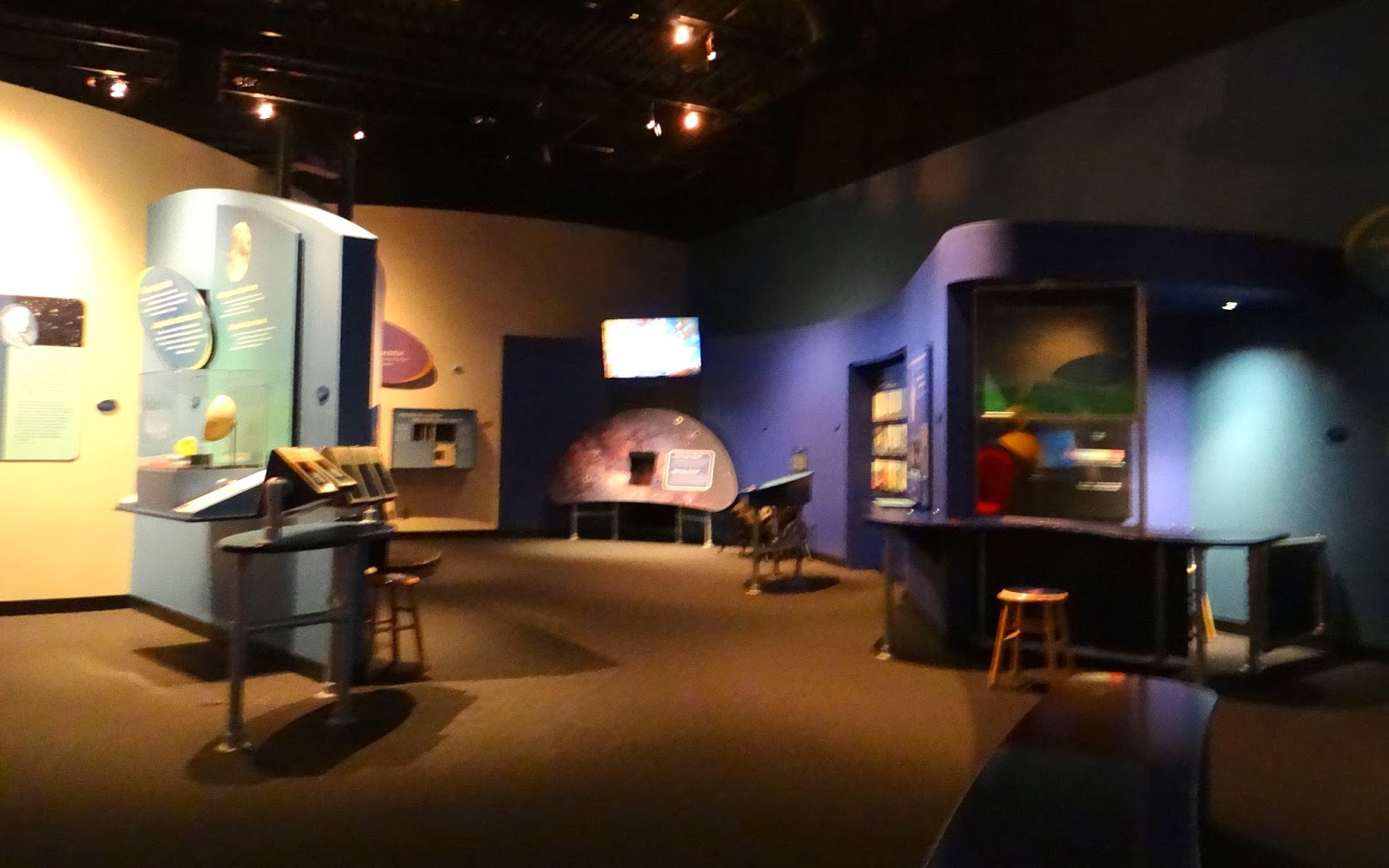 I walked through the interactive exhibits, watched several different video presentations about Astronomy and telescopes and Earth changes throughout history of our planet Earth.  Then, I popped over to the StarDate Cafe for a grilled cheese sandwich and a bottle of water that I ate as I walked outside the Visitors Center.  I also visited the Gift Shop and bought some interesting outer space treats and games for my grandchildren.  [I'm always on the lookout for fun ways to peak their interest in learning new things].

I carried my purchases out to Petunia and took some photos, mostly of the horizon from the parking lot just before and just after sunset. 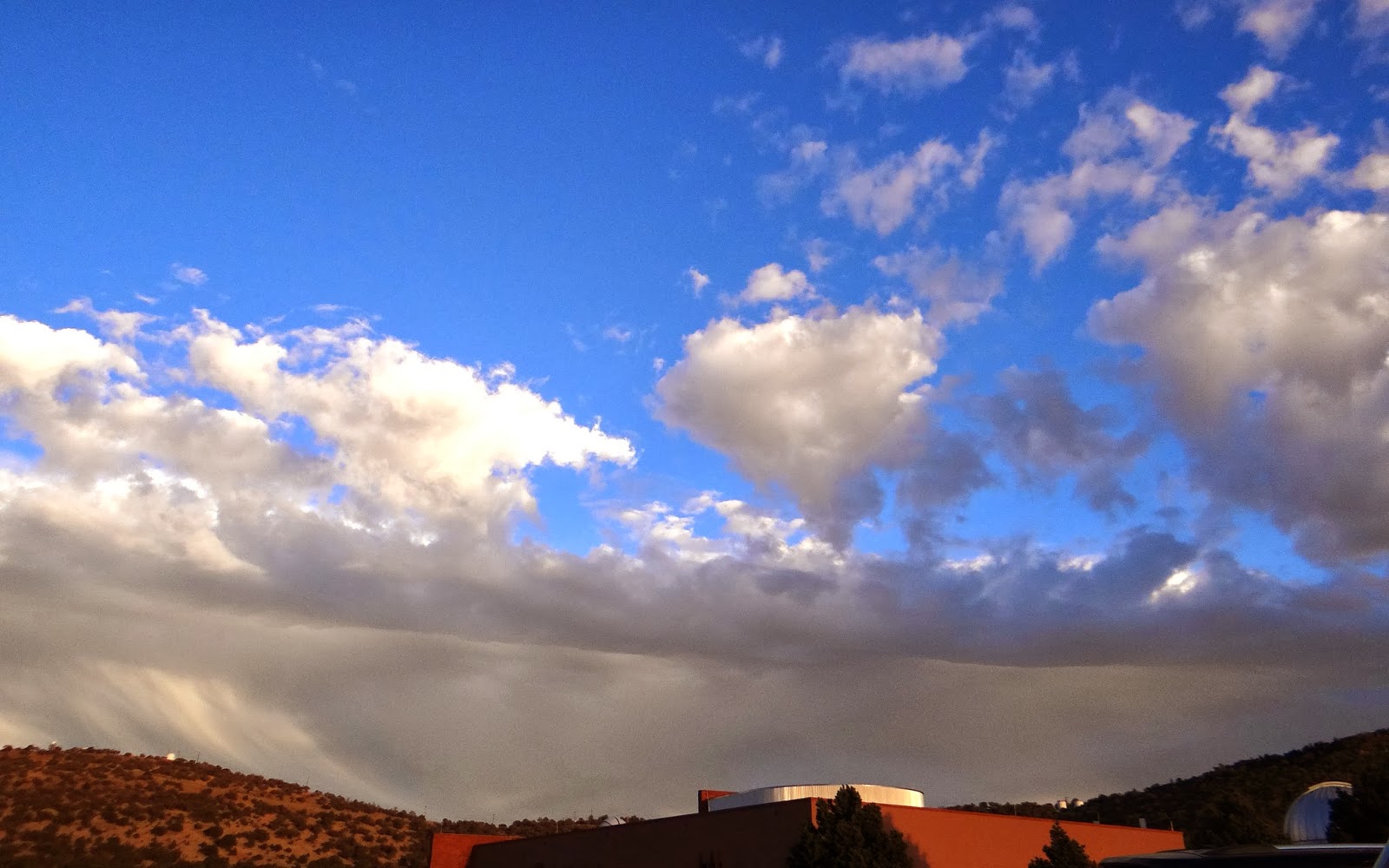 I'm sorry I wasn't a little faster with getting my camera out.  Five wild boars sauntered out of the brush and ambled across the road to find a nice place to have a snack or bed down for the night or just relax before crossing and re-crossing the road for the downward traffic after all the programs are finished for the night.  There are three in this shot.  A lady from the area said they're very common and very passive about humans.  The bigProblem is avoiding hitting them on the road after dark.  [The only time I'd ever seen wild boars - in the wild - was hiking in the Louberon in Provence, France.  They were not friendly and were known to be very fierce if in close proximity to humans]. 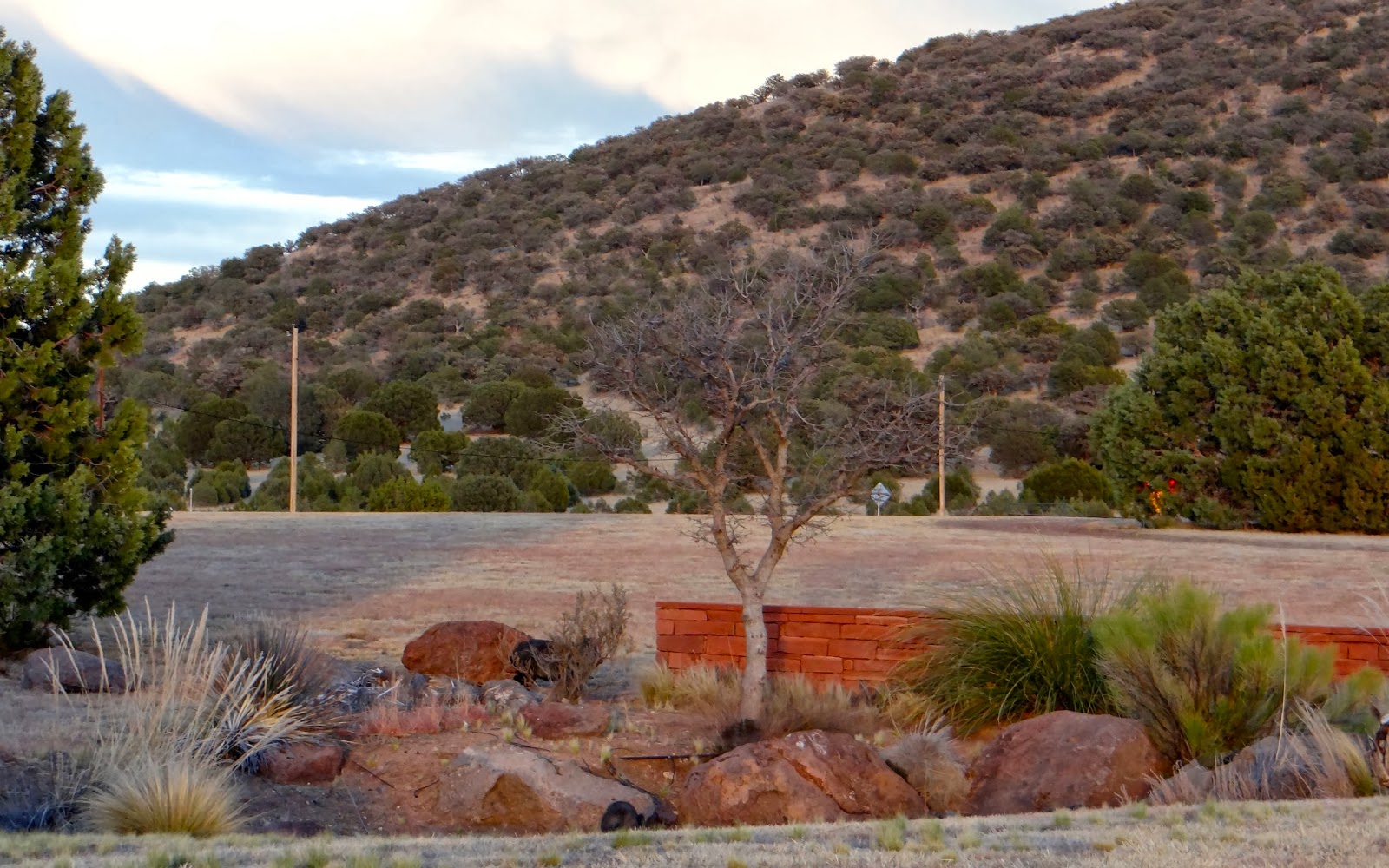 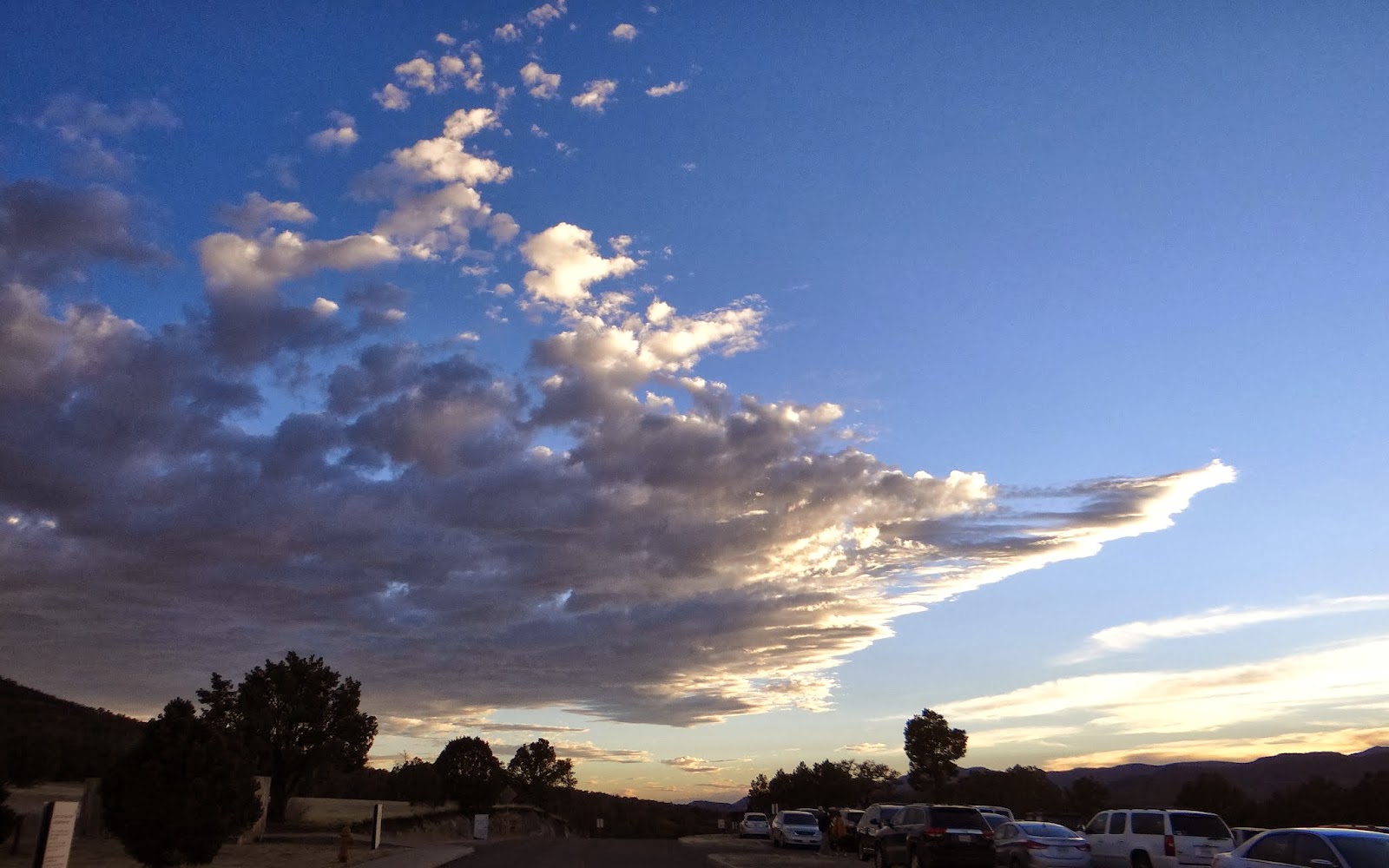 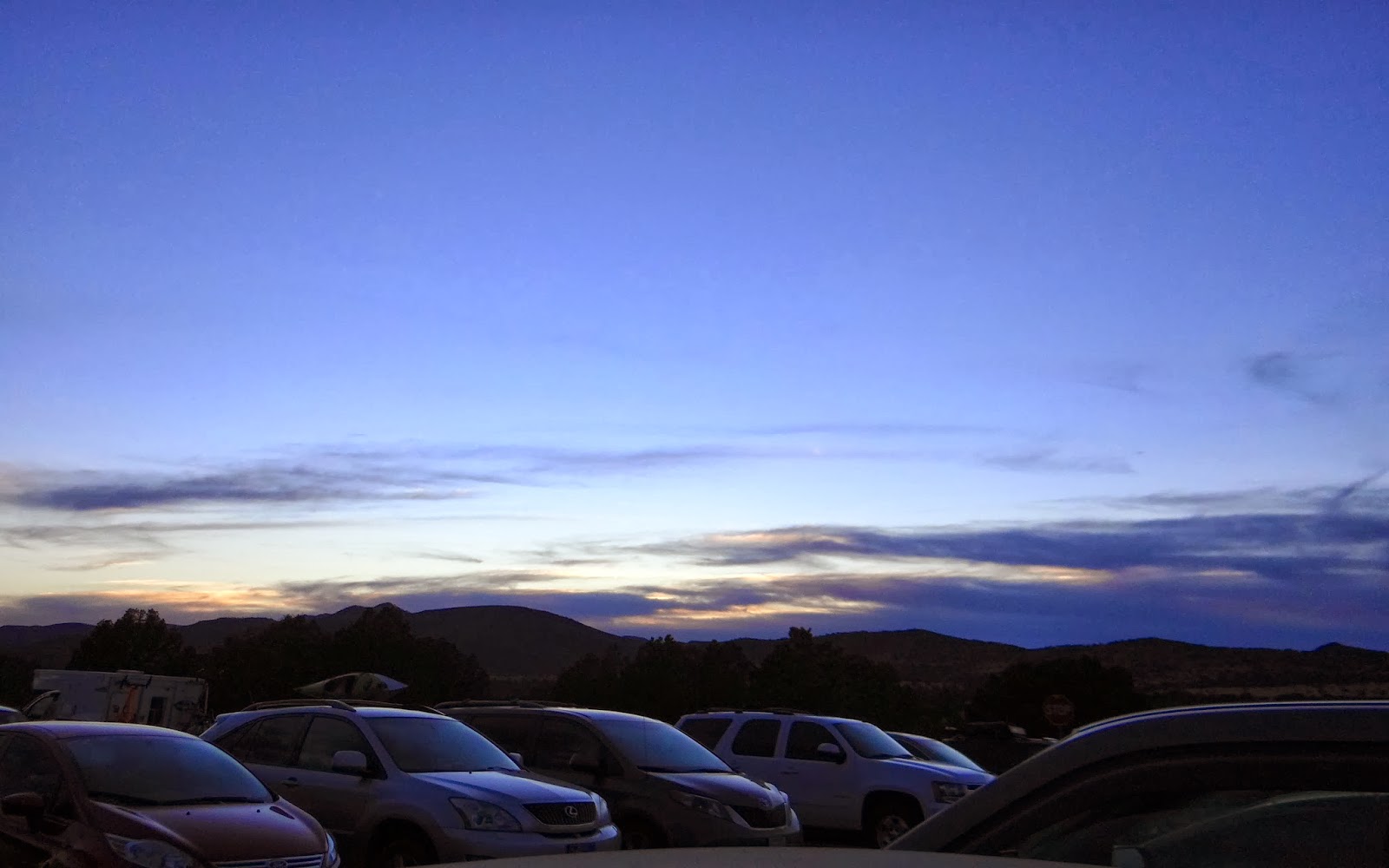 I was sad to miss the educational Twilight Program, but very happy that I'd taken a look at the brochure when I did.  I would have completely missed the very interesting and informative Star Party.

I walked back into the Visitors Center minutes before we were invited to walk to the outdoor auditorium where an astronomer gave us a wonderful talk about stars, galaxies, constellations, nebulae, moons, etc.  He indicated that the evening would progress dependent on those pesky clouds.  If they continued to move over the observatory to reduce observation with the telescopes, we would move indoors to a pre-produced program of what we would not be able to see utilizing several of the many telescopes there at McDonald.

He used a laser pointer to actually point out various stars, planets and nebulae. Wow, is all I can say.  I've taken many many science classes in my days, but this was like no experience I've ever had.  The McDonald Observatory is known to have the most successful access of any observatory in the United States to our Universe and the galaxies beyond.  It is high and it is dark. Care is taken to inform visitors to not use cell phones, cameras or electronic equipment of any kind, for any purpose during this time of observing the sky.

At the completion of his introduction he sent us to actually visit several of the telescopes located on the grounds of the Visitors Center.

There are many telescopes at the observatory.  The biggest is the Hobby-Eberly telescope.  Then, there's the Harlan J. Smith scope, the Otto Struve scope, and many smaller scopes.  Just learning a little general information about telescopes was fascinating.  Also because of the clear, dark skies, stable atmosphere and established infrastructure of the McDonald Observatory, other countries and organizations has asked for and received permission to place their own telescopes at the complex . . .

For example: the Robotic Optical Transient Search Experiment (ROTSE) is an international collaboration that uses four automated telescopes around the world to quickly observe newly discovered objects like gamma-ray bursts and X-ray transients.
Another is MONET, located on the flank of Mt. Locke; this German-owned scope is one of a pair that's used by high school students to observe the night sky.  The second one is located in South African Astronomical Observatory, site of the SALT telescope, which is the "sister" to the Hobby-Eberly telescope.  High School student astronomers can operate the Monitoring Network of Telescopes remotely from they classrooms.
And, yet another is the Boston University Telescope that studies faint effects in Earth's atmosphere, along with the environments of other planets and moons

I'd sat next to two Central Texas ladies, one a retired dog groomer and the other a retired intensive care nurse - boy, did we chatter while we waited (patiently) to get into the housing for the various telescopes.

Through one telescope I saw Jupiter, the largest planet in our Solar System; not only the planet, but it dark rings and its four moons - "plain as the shirt on your back!!!"  Incredible - it looked as though it was just floating up there in our heavens.  It's plainly visible in the night sky and it's roughly 10 times the size of all other planets in the Solar System, combined!

We checked out various different examples of different formations in the heavens using different types of scopes, each monitored by a resident astronomer who answered all our questions and added interesting tidbits of information.  I'm stoked.  Now I need to find an online Astronomy Course.

One missing attraction last night:  our moon had presented itself as a Blue Moon yesterday morning, meaning that it would not be visible last night.  Nope, never did see it!

I'd like to thank one reader, in particular, for her encouragement NOT TO MISS this opportunity to visit one of the truly wonderful science projects in the world. Thank you, Kim.  While I was tourist-tired, I didn't even give a thought to not driving back to McDonald to visit.  I am so glad I did.