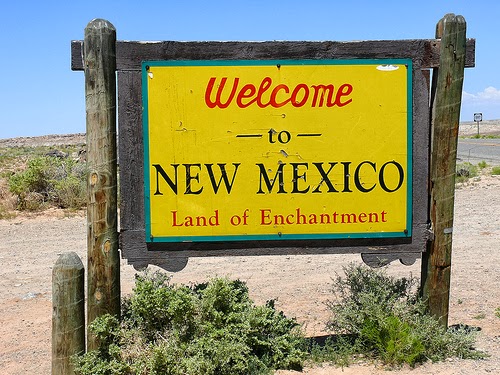 I traveled through this Land of Enchantment just about ten months ago and blogged about Leasburg Dam State Park and Rock Hound State Park.  (Check them out if you'd like in my blog archive for 4/28-4/30/2013 - it's fun to go back over how I traveled in Daphne Dolphin).  But, yesterday, after three days and two nights at Camping World, I was ready to get somewhere I'd like to relax for several days.

Fortunately for the drive yesterday we didn't have to utilize any of these warnings:

VISIBILITY MAY BE ZERO

DO NOT PARK IN TRAFFIC LANES
It was smooth sailing on I-10W for about 150 miles from Anthony, TX / NM to Lordsburg, NM and a KOA campground.  I don't know about you, but I'd prefer NOT to use KOA since I find most all to be overpriced for what you get.  This location is no exception.  Situated in probably the dustiest area in  this very dusty town, sort of on the wrong side of the tracks, it's nothing  to write home about and I paid $41 for a full hookup.  I'd intended to just get electricity and water, but the difference was less than $2, so I went for broke!
When I arrived I was exhausted (remnants of the flu and the extreme exhaustion of waiting around Camping World for 2 and a half days and then driving, etc.); so, I fixed a meal combination of lunch and dinner and hopped into bed to read at about 7 o'clock.  I do remember seeing 7:30 on the clock when we returned to the rig after taking Lacy out for a dusty, rocky terrain stroll.  That's the last time I was conscious of until this morning at 5:30!  Once again, I do amaze myself with how long I am able to sleep - after a lifetime of never sleeping over about 7 hours at a time.

So What Was Accomplished On This Go-Around at Camping World?

I'd been remiss about starting the generator every so many days / weeks during the fall and winter, I sorry to say.  It just slipped my mind most of the time.  I did remember at the end of my stay in Abbeville and I noticed that it started right up, but didn't stay on until I consciously turned it off.  You might also remember that I'd had an issue in Abbeville with this funny motor sound that would come on by itself.  It happened when Marvin (my Cajun friend) was in my rig.  He determined that it was the generator going on by itself!  I turned it off and we just couldn't figure what had happened.  A couple of days latter the same thing happened while I was standing outside talking to Marvin and a couple of other guys.  "What the heck is going on?"  I again went inside and turned off the generator.

The next time it happened I discovered the source.  It seems that Lacy, in hopping up onto the dash would inadvertently bump the back-up camera and the antenna of that piece of equipment could just reach the On / Off switch for the generator!  Mystery solved.

When I went to CW in New Braunfels, TX, I didn't even mention anything about the generator because I'd 'solved' the problem myself.

Well, while traveling through Texas, and that's some drive, I started remembering to turn the generator on from time to time.  Oh, oh.  Sometimes it would go on for several minutes, sometimes only for a few seconds, and sometimes not at all;  and, the 'not-at-all' scenario occurring every time for the last couple of days.

So, I decided to visit yet another CW in Anthony, TX / NM (yup, Anthony lies in both states!).
First off, when I arrived at about 2 on Monday, they couldn't even look at the rig until Tuesday morning so we camped in an RV park right behind CW.  I took it in yesterday (Tuesday) morning and they found that the carburetor  for the generator was not functioning at all.  Okay, new carburetor needed - Yes, they could do the work on Tuesday.  They also checked out the water heater, which had been "fixed" yet again in New Braunfels and functioned perfectly, for about three days; then went back to its old ways of haphazard / incomplete / non-functioning.  [I've had that water heater "fixed," I think, four times on this road trip]!  Anyway, CW, Anthony, first thought it needed a new board, but when the technician get it apart, he found that the board was working correctly.  But, he found that it needed, oh my gosh, I can't remember what part (I have it written on my receipt so I'll know what to tell the next repairman); but they didn't have it in stock and couldn't get it for 4 - 7 days!

So, I'm continuing to live with it; water heats up perfectly well one time, next time only to tepid and / or sometimes just won't go on at all!  Frustrating, but not impossible to deal with a while longer.  Here's more and more proof that I need to increase my mechanical knowledge base considerably!
Below is an Atwood water heater like mine . . . the issue has to do with gas combustion; the part costs over $200 with and hour and a half labor . . . 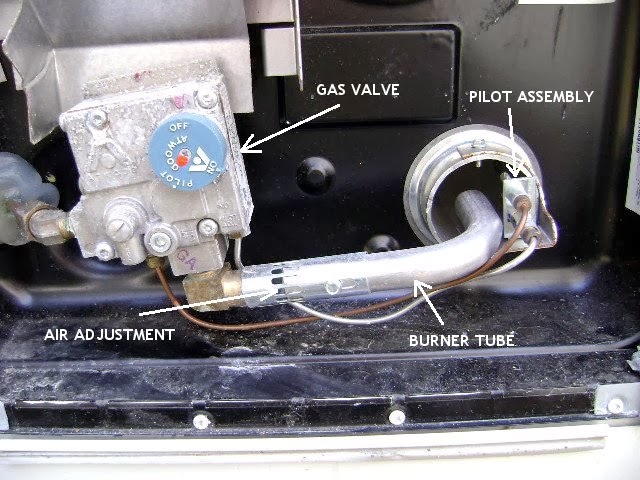 With all that they could do accomplished, I asked if they could install a mud flap on the rear of Floribunda - to decrease the amount of dust, dirt, grime, and mud that has been spraying up to cover the back of Floribunda and all of poor Petunia.  "Oh, yes," they could but not until Wednesday morning.  I was told installation would take about an hour and it was first-come-first-serve, so I arrived there at 7:45 yesterday morning - first in line.  Yea!  NOT.  I drove out after 12 - but was only charged for an hour labor!

I'll be heading to Tucson, AZ today.  I liked it there when I visited in January 2013, so I think I'll take a couple or three days to relax and maybe catch a museum or whatever, before I head to the Phoenix area for several days.

Since I knew the carburetor install job would take some time, I decided to go to the closest Macy's, as I had some credit on my account just "burning a hole in my pocket," as they say.  I checked on google maps on my iPhone and found a Macy's on Willie Mays Drive in El Paso to be only about 10 miles from CW.  Off Lacy and I went in Petunia - following the trusty google maps.  It took us east on I-10 for a couple of miles and then we turned onto a new highway called the Trans-Mountain Highway.  Hmmm, this is interesting - lots of road construction going on.  Also, this ten miles seems a little short for the amount of Trans-Mountain highway we're traversing!  Oh, okay, so it's a little further than first promised; we finally get off the highway and follow the easy google directions to Sandy Colfax, Whitey Ford and finally Willie Mays Drive - right in the middle of a residential area - absolutely no commercial buildings at all!  I wind my way out all the baseball player-named streets and fine a convenience store about a mile away.  I popped in and asked the clerk where the Macy's store was.  "Oh, you're in the extreme west of El Paso.  There are three Macy's stores right off I-10.  You have to go back over the Trans-Mountain Road and then east on I-10 about ten miles!!!

So, I did get to Macy's and I did spend my credit amount but I drove over 80 miles to do it!!!