With a heavy heart, I left Amarillo yesterday afternoon with Lacy and Eleanor, without Lincoln.   The park owner and the shelters have my contact information and promised to let me know if he were to show up in one of their locales – alive and well.  And, I’ll go back to retrieve him if I get the word.  I’ve mentioned, in a few of my replies to comments, that I'm convinced his life with me was a blessing for him as he’d been an unwanted kitten.  I also don’t want to chastise myself for allowing him to go outside.  I found early on in my relationship with him that he ‘needed’ to explore in the natural way cats have behaved for millions of years.

I’ve had innumerable pet cats in my life, well over a hundred in total.  Some have been entirely indoor cats, some entirely outdoor, the majority has had both experiences.  I know the possibility of accidents and loss are greater when the cat is allowed to roam; but cats have probably been roaming longer than we humans have walked the earth. 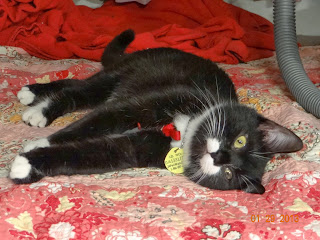 named after President Abraham, who also tread some dangerous and uncharted territory.  Lincoln kitty was long and lanky, quiet and inquisitive, alert and friendly and the best he knew how to be.  Sound a little like Abraham?  When I rescued him last December at the Cat Sanctuary they’d named him “Magpie” because of his black and white coloring; but I’d just seen the movie, “Lincoln,” and decided it was an auspicious name for this little 4-month old kitten.

Only about two weeks after I’d rescued Lincoln and Eleanor, they joined Lacy and me for our 5-month trip in Daphne Dolphin to Mexico.  We had such a wonderful time on that adventure, I bought Floribunda and Petunia upon our return, to begin this current adventure.  Eleanor never has shown interest in going outside, either at home or on the road.  Lincoln was another story.  From day one he wanted to know everything about everything inside and out.  In Mexico, he ‘escaped’ several times, once for almost two days; then would come sauntering back like he’d just left for a little walk.  After what I considered near misses, I decided to leash train him so he’d have a feel for new ‘yards’ as they presented.  When we were only staying overnight I'd keep his leash tied to a cord so he couldn't escape; if we were to stay at a location longer than a couple of days I walked him on a leash and let him sniff bushes, etc.  It had always worked – until this time.

As I was readying to pull out of Fort Amarillo RV Park, going through my checklists, I spotted that the directional signals were not functioning.  Geez!  I googled, then called a Goodyear Tire and Repair store nearby and they said they could ‘fix’ whatever was wrong.  I certainly hoped it was just a fuse or something as simple.  I drove the rig and toad without turn signals through only three turns and didn’t have to go on I-40 to Patrick’s Goodyear.  He said it’d be about 20 minutes before they could check it out.  An hour and 20 minutes later, his repairman came out to the rig and diagnosed the problem – two fuses were bad.  Boy, they’re hard to get to under the dash on the driver’s side.  It’s a small space.  Hector, the repairman, is a slightly built Mexican from Juarez.  We spoke Spanish while he replaced the blown fuses and checked all the others; they were fine.  I asked if I could buy some extra fuses from them but Patrick, the owner, declined and told me to go to O’Reilly’s or the like.  So, I paid the bill. $80!!!  I asked why so expensive and Patrick responded that he should have charged me a $150 minimum labor charge. OMG!  What is this world coming to?  I guess my mistake was not questioning / receiving an estimate; but Hector, the repairman, just showed up at the RV saying he’d check the fuses.  The last time I had a blown fuse replaced they charged me $1.  Then, after my expensive interlude at Patrick’s Goodyear, I decided to check it out carefully before I drove away.  The turn signals worked – and then stopped!  Hector came back out and replaced what had to have been a bad new fuse – it was blown.  He opened his little box and gave me three extra fuses; I’m sure his boss didn’t know. 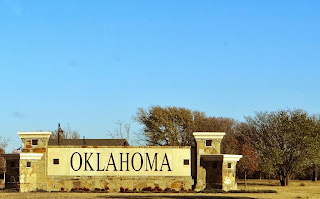 Another of those "Taken through the windshield" shots

I’d considered driving to Oklahoma City, but modified that plan as we didn’t get out of Amarillo until after 2 in the afternoon and only had a few more hours of daylight, I decided to drive across the border into Oklahoma and start looking.  I recently subscribed to Overnight Parking; so, as I perused the listings for free camping in the Elk City,OK area I found a city park that has five RV 30-AMP hookups with water – FREE for up to four nights.

We got here around 5 and saw two pickups about 200 yards away from the RV sites.  I pulled into one, connected the electricity, but not the water as I didn’t know how cold it’d get during the night.  About 15 minutes after we hooked up the two pickups left and we’ve been the only visitors here since.  It’s not the most beautiful park I’ve ever been in; but it’s located in an Oklahoma-style upscale neighborhood; the nearest houses are about a mile away.  There’s a shallow looking lake that’s not overwhelmed with water at this time of the year.  But, we’re happy here and may even stay another night.  Not another soul has crossed our path - serenity in Oklahoma. 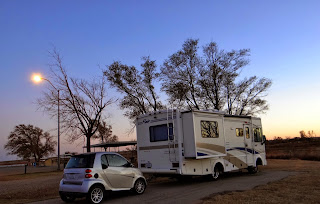 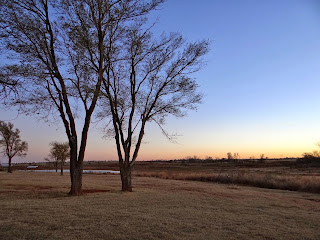 That's all for now, folks!