Yes, I think lots of us either remember, or have heard of, the famous / erroneous headline in the Chicago Tribune, declaring  Dewey the winner in the Presidential election of 1948.  It happened 65 years ago today.  Thomas Dewey was the Republican Mayor of New York City, considered by many to be the front runner in the campaign against the incumbent, Harry S. Truman.

The story goes that the Chicago Tribune had earlier that year begun a new copy printing process that made it necessary for breaking news articles to be ready about two hours earlier than previously.  The lead story was, of course, regarding the result of the election.  At the time they went to press, not all votes in the eastern seaboard precincts had been counted.  They 'assumed' Dewey had won! 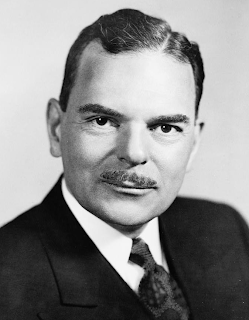 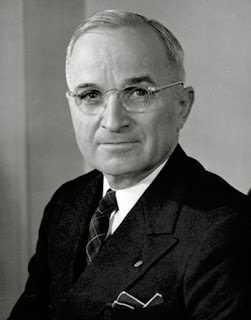 This photo of President Truman was taken at the St. Louis, MI train station as Truman was boarding a train for his return trip to Washington, DC 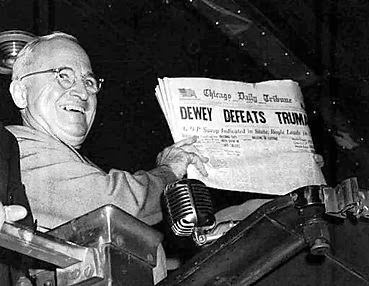 In the aftermath, the folks at the Chicago Tribune were able to laugh at their error; they even told President Truman that they would have a  plaque made and presented to him on the 25th anniversary of the election.  Unfortunately, Mr. Truman passed away in 1972; the plaque was never made.

More Albuquerque.  I mean, after all, I've finally started spelling it correctly.....

I decided to make one more trip into Albuquerque today, before I leave tomorrow to head east.  This is a picture that is certainly not that good, but it does show how Albuquerque hugs the Rio Grande 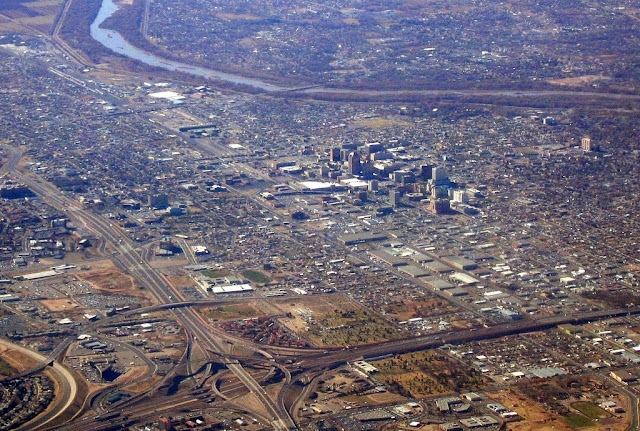 This is a photo sequence I got off the web.  Albuquerque's annual Balloon Fiesta concluded a week before I arrived.  I'm sorry to have missed it and hope to get back here next year or ? to see the fiesta 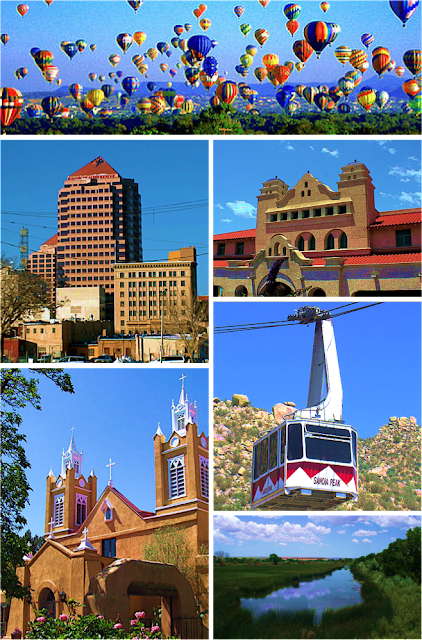 Check out the link below and make it full screen.  It's fantastic
Albuquerque Balloon Fiesta 2013

Today, I decided to drive into Albuquerque one more time before I head east tomorrow.  I was using my iPhone's google maps and thought I'd entered the City Hall as my first destination.  This is the building it directed me to.  I parked Petunia and walked all the way around this structure and never did find  any identification  and I couldn't even find an entrance!  I did find a side down-ramp identified as "Handicapped Entrance," but nothing else.  I went back to Petunia and started to enter "Court House" as my next destination when I noticed that this building is not the city Hall, but the City Planning Department.  Hmmm.  No obvious entrance, no identification; I wonder what they're planning! 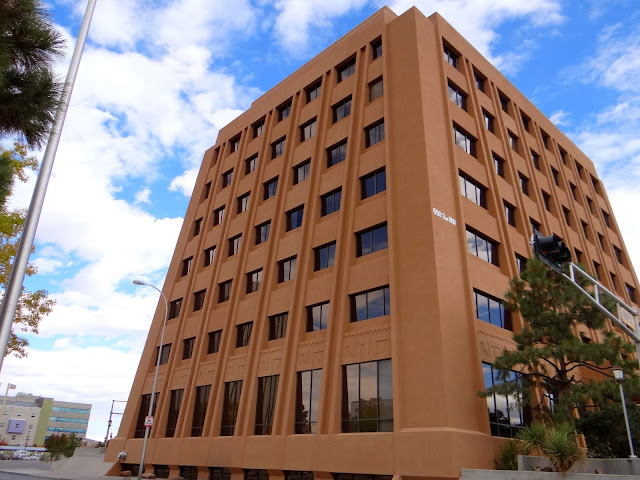 I finally found the City Hall a couple of blocks away.  I'm thinking it's not a very impressive looking structure 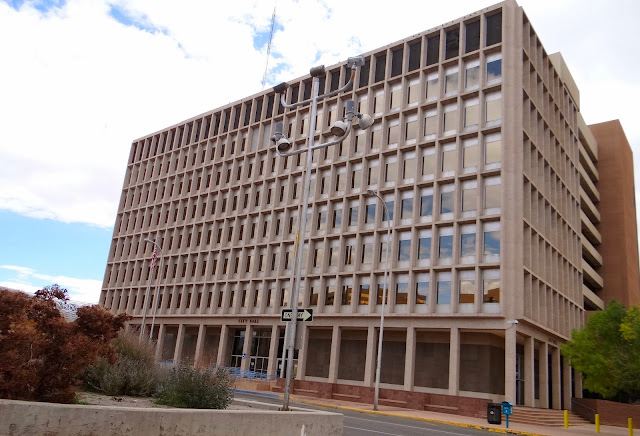 Albuquerque is the largest and most populous city in the State of New Mexico.  It's also the Bernalillo County Seat with a population of 550,000 in the city proper.  I need to find some pretty buildings ... 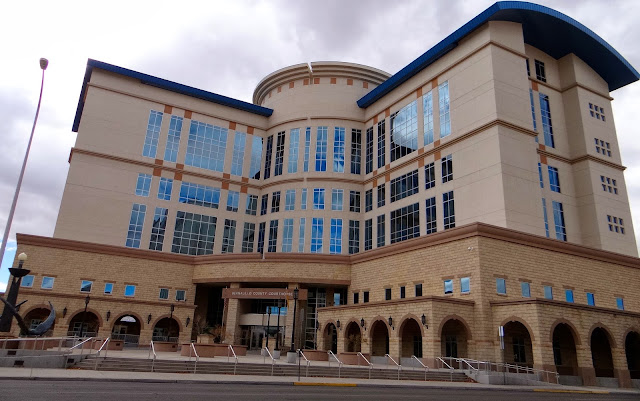 Some attractive bank headquarter buildings in the same area.  Those banks seem to have a lot of money to spend on real estate - their own! 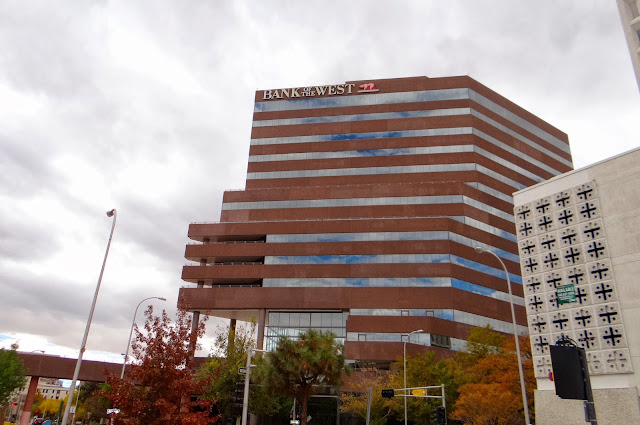 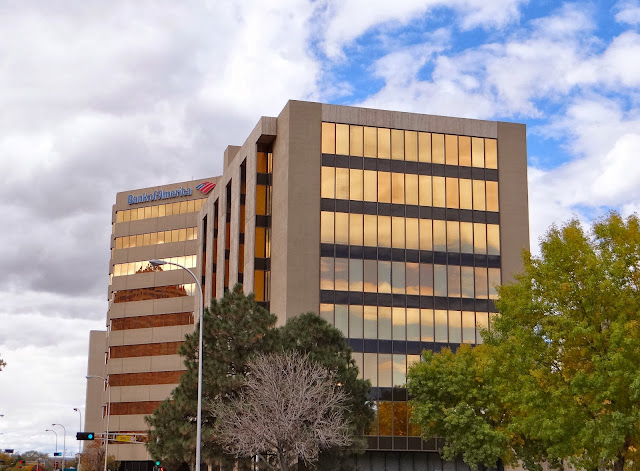 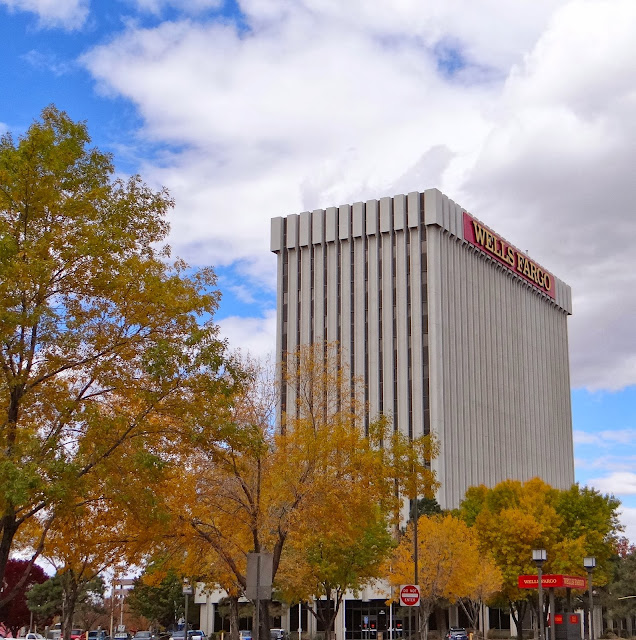 The Sandia Mountains protect the entire eastern side of Albuquerque.  They are stunning; these photos were taken through Petunia's windshield as I was driving home.
It appears one can't mess up photographing this range.
The Village of Tijeras and the Cibola National Forest are just a couple of miles ahead. 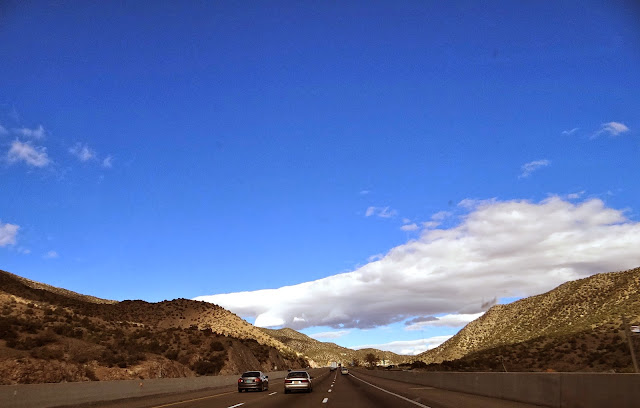 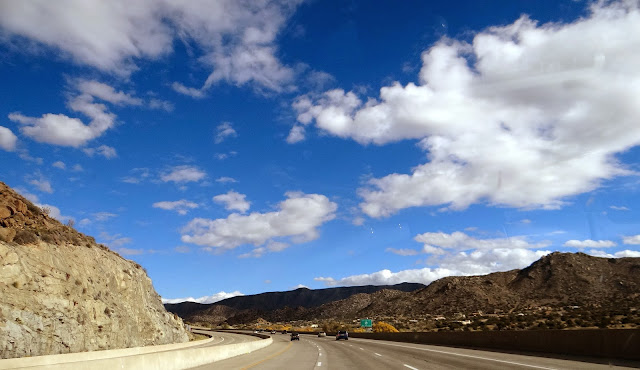 I returned to Leisure Mountain just in time to take Lacy and Lincoln on an early evening walk.  Yes, Lincoln is without a leash.  This cat amazes me.  When we arrive at a new "yard," I take him out on the leash a couple of times; and, from then on he knows his way home.  He does wish he were a dog, I think! 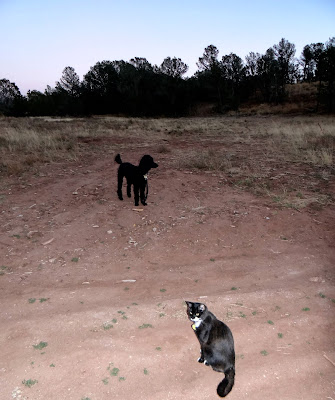 A beautiful sunset this evening 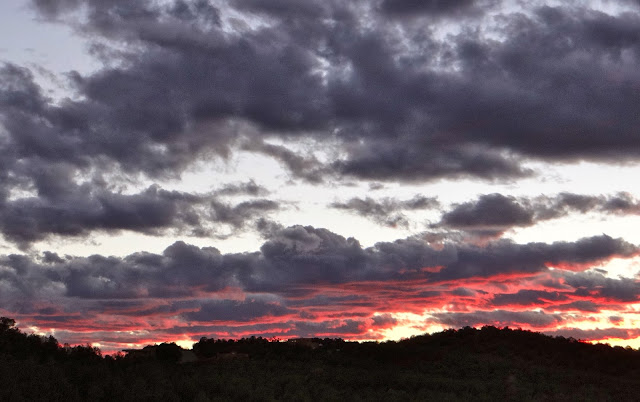 Happy Sunday all.  Catch you later.