Enjoying the Good Life, RV Style and the Red Bluff Bluff Round Up

We're starting to gear up for our next jaunt - all the way to Weed, CA tomorrow.  I'd thought of parking at Jeff's in Cottonwood for a day or two but it's so darn hot, I'd have to run the generator 14-16 hours and that's a lot of gas consumption, as well as noise pollution if anybody's near.  I've decided to drive only as far as Weed (about 85 miles) - one of those places I've passed through innumerable times but never stopped to get the lay of the land.  Maybe I'll take Petunia out for a spin around town later tomorrow if I can stand the heat.  I know, you think I'm talking like a wimp; I guess I've just had TOO MUCH HEAT for one year - after wintering in Mexico and traveling the Southwest during April and May; then almost three months in the San Joaquin Valley.  I'm ready for temperate!
I checked on two Passport America parks in the Weed area, the first doesn't honor the discount on weekends and considers Sunday night part of the weekend.  The second has stopped their affiliation with PA; so, I chose the less expensive of the two and will pay $33 for tomorrow in Weed - full hook-up pull through with all the trimmings.

I have some more photos of the Floribunda Flair "face-lift" accomplished a couple of days ago ........

I'd seen this father-son-daughter-in-law team around the park doing several RVs.  I sauntered over and asked what they'd charge to "do the works" on my rig.  Papa said, "Right around $250-300."  I responded, "I'll think about it and let you know."  He said they'd need a day's notice if I'd like to make an appointment.  An hour or so later the camp host stopped by and assured me they're a reputable operation and do a fantastic job.  So, I decided to go for it as I knew I'd never get to the whole rig the way they can with their equipment. 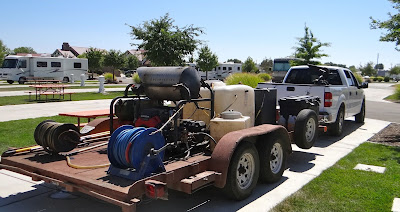 They arrived Thursday morning at about 9:45 in this rig that they parked next door - it has all they need to do the whole job - even water, although that wasn't necessary in our case.  And away they went = to work.  The daughter-in-law wasn't with them - just Pop and son. 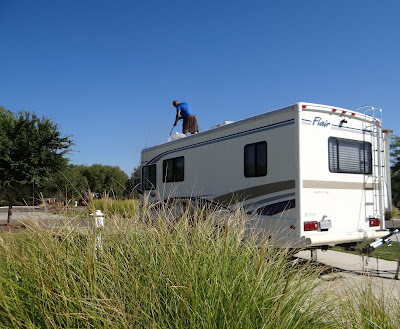 Junior immediately climbed the ladder and started power-washing the roof - yippee, no leaks were noted! 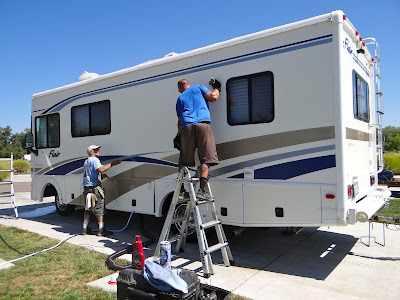 Boy, did these guys work hard in heat from about 80F. when they started up to about 103F. by the time they finished four hours later.  That's 8 hours of labor and I was there the whole time - no breaks were taken!  I did notice they were drinking JOLT or the likes - must have been a caffeine high! 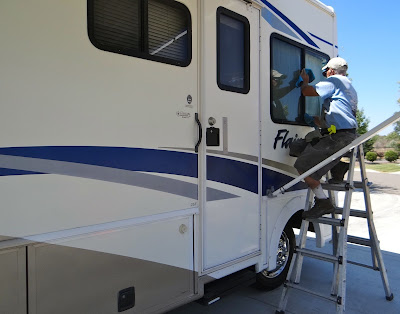 Here's the dad finishing up the last window - Whew! 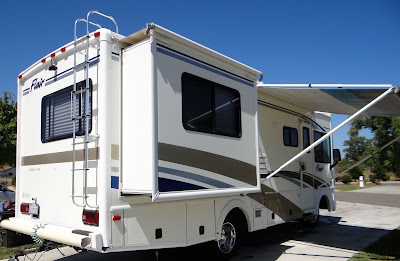 And, now Ladies and Gentlemen, may I present Miss Floribunda Flair with her face-lift.  She's glowing and so ready for our adventures.


Back to another subject - Red Bluff photos from the other day ...

The following two photos are of the Tehama County Courthouse and the park-like surrounding area. 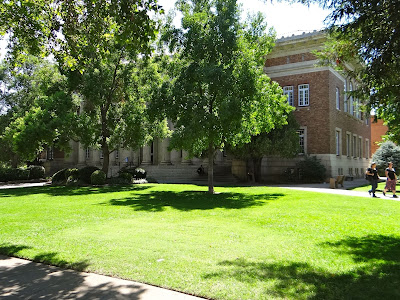 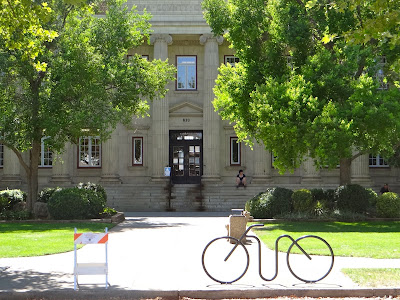 Remember I mentioned I'd lived in Red Bluff in the late 80s and early 90s.  I worked for Saint Elizabeth's Hospital as Assistant Home Health and Hospice Director.  The reason that I bring it up in reference to these photos is .....

A very popular yearly event in Red Bluff is "The Red bluff Round-Up" week with all kinds of activities, celebrations and high-lighted by the rodeo of the same name, a famous stop on the National Rodeo circuit.  Top notch cowboys from all over come to compete - it's quite a show - and has been going on since 1918.  It's really fun for all ages.

Well, during the week of festivities, it is illegal to frequent any locale in the town of Red Bluff without wearing Western garb.  I was warned beforehand my first year here that I could be 'arrested and taken to jail' if I appeared anywhere in town without the requisite attire.  Since my business attire was just that - business attire - I had to scamper around to make sure I'd pass inspection by the law.  I wore red cowboy boots, denim dress and western scarf - and the like, each day of that week.  Walking into the bank, for instance, I was greeted by tellers dressed as dance-hall girls, the bank manager as a sheriff.  All over town, hospital included, people followed protocol (the law) and sported all sorts of western attire.

How does that have anything to do with the Courthouse?  Glad you asked.  Well, during Round-Up week, one has only to drive by the Courthouse - right where I stood to take these photos - to see, right on the front lawn, a JAIL, built every year just in time for this week's activities - everyday of Round-Up week it's possible to stop in front and see the incarcerated villains!  It's a hoot.  The police 'arrest' offenders and haul them to jail (in their patrol cars or on foot), where they remain - having lots of opportunities for photos - until they can get themselves released on "bribe,"  I mean "bail."