I LOVE WEED .... California That Is! And, on to Ashland, Oregon

Monday morning ,,,,, after an uneventful (thank Goodness) 85 mile trip north on I-5 yesterday afternoon.  I began to really feel the wonders of this beautiful Country as Miss Floribunda climbed upwards and we crossed over Lake Shasta, and even though the lake is low at this time of year, there were all those houseboats and ski boats out there living it up and enjoying what, for some, would be the last weekend of Summer vacation.  Kids return to school in August!!!

But, I get ahead of myself.  The whole weekend was special for me even before I stepped in the driver's seat to really begin my solo adventure .....

Saturday morning I spent time, again, rearranging things for convenience (I'll bet I'll be doing that the rest of my life!) before the terror heat, up to 105 in the afternoon got the best of me.  But, did that heat stop my soccer-playing granddaughters, you ask?  No way.  At 6PM their team scrimmaged with their coach's alumna team; now, Malia and Samantha's team is made up of 13-14 year olds, the alumnae were strong, soccer-playing women in their 20s, some with their own families.  In the horrendous heat they tied 2-2, playing at the Redding Soccer Complex, a beautiful park setting, dedicated to soccer, with about ten fields.  It's the girls' home field and it's really something.

After the game Jeff treated Alice, myself, the twins and two friends to dinner at our favorite Redding Mexican restaurant, Guadalajara on Cypress Avenue.  It's always fun for me to be able to practice my Spanish and the waiter was happy to indulge me. 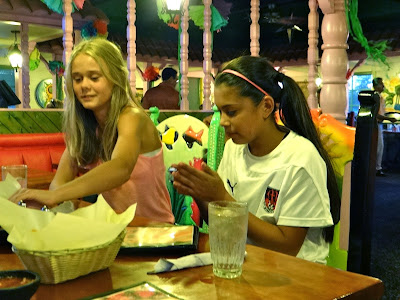 Malia, with the ever-present iPhone, and friend Kaylen, who just moved back to California from Anchorage, Alaska. 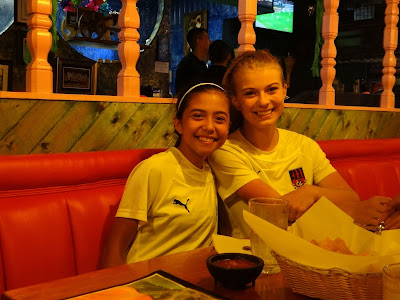 And, Samantha with friend, Paco, or is it Taco? - aren't they all adorable?

Yesterday morning I spent a relaxed time preparing for launch:  stowed items, hitched up Petunia and readied all for take off.  Durango RV Resort management agreed that I could stay a little past the check out time of noon,  so Jeff picked me up to go visit my father-in-law and his girlfriend, Ursula, one last time before I head out.  Although I've been divorced for over 20 years, I still think of Spence as my father; he's a wonderful man who's had, and is having, a fantastic life.

Jeff had prepared a nice picnic lunch, which we all relished - a deli spread that he 'threw' together so Spence and Ursula wouldn't have to 'entertain' us.  Spence met Ursula, a widow, about 4 years after the loss of my mother-in-law, at a Thanksgiving dinner at my house in 1987 and they've been together ever since.  At almost 99 years young, Spence still drives between their two houses, one in Red Bluff and the other in Silverdale, Washington every couple of months!  We talked a little about the fact that when his drivers license comes up for renewal in November, he'll be required to take a vision test; if the result is 'no license,' Ursula will do the driving.

Oh, how I love that man.  He's an inspiration for how I'd love to spend the next 30 years!   After his wife passed away in 1983, he continued traveling around the Country, making lots of friends and doing lots of fishing.  At home he potted and painted (he's a fantastic artist), fathered, grand-pa-ed, great-grand-pa-ed, gardened, decorated and cooked.  And, all along he's been an avid reader;  yesterday the end table next to his favorite chair was stacked high with all kinds of best sellers, classics, history - novels and non-fiction.  His body has become a little frail but his mind is completely intact.  I know that each time I see him may be the last and I love every second of it. 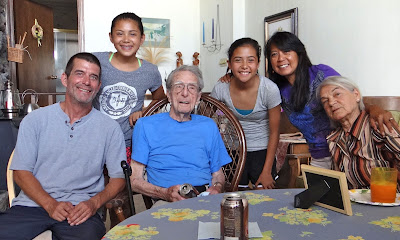 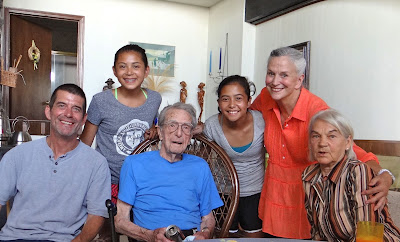 Same group minus Alice plus Mimi 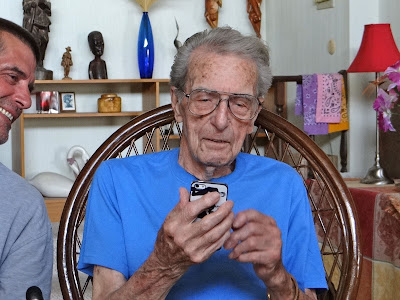 I just love this pic - Spence 'face-timing' with the triplets in El Dorado Hills while his grandson, Jeff looks on.  He's one heck of a Grandpa.  My ex-husband, John, always called his dad, 'Pater, so the grandkids and great-grandkids call him "Grand-pater"

BTW, when my great-nephew, Doug, and Christie deliver later this month, Spence will become a great-great grandpa.  And, another interesting tidbit:  Ursula is the mother of Spence's grandson's wife, so she will be the great-grandma of the new baby.
[That's another story!]

Jeff drove me back to Floribunda and we took off, Jeff behind me for a few minutes; then we waved 'good-bye' and the kids and I are on our own.  The "Friendly RV Park" here inWeed is east off of I-5 only a couple of blocks, nestled in a grove of redwood trees, a small but clean and friendly place - $33 for a full hookup (which I didn't need).

Flower baskets outside the office at the Friendly RV Park 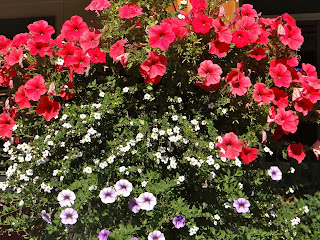 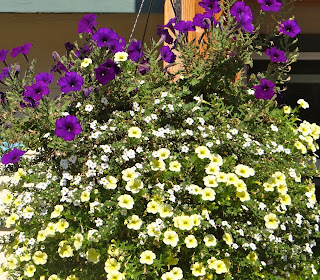 So, today it's off to Ashland, Oregon - only 55 miles - for about a week there.  Hmmm, I wonder what adventures we'll find!

2:30PM  Arrived at Glenyan RV Park in Ashland about an hour ago.  Upon arrival I found that the pull- through reserved spot is mostly sunny all day long and it's still hot here; so I asked if I could move to a back-in space in the shade and if somebody could usher me into it.  The host was not only willing to usher me, but volunteered to park the rig for me!  So we unhitched Petunia and he parked Floribunda while I drove behind.  Everything worked out great until the host left the door open and Lincoln left too!  Now he's holed up in a bunch of blackberry bushes; I'm going to have to be patient and just keep calling for the little sweetheart to come home to momma.