Wednesday morning ....
I noticed last evening that the couple two sites over from us were very well attended by a black cat so I decided to head over there this morning to see if they might have some secrets for keeping their kitty nearby, but outside at times.  Well, the kitty isn't theirs, but a long-term resident of the park, so no help there.  However, I had a delightful conversation with Vicky and Jeff who live outside Portland and have been coming to this park for 34 years!

And, like most campers I've met, they're very friendly and open and obviously enjoy meeting new people.  We talked for 20 minutes or so and will hopefully visit more later.  When I told them I'm headed up into Washington's Bellingham/San Juan Islands area, Vicky said they have friends who live in the area who I might like to meet.  She referred to her friend as someone "who's never met a stranger."  Talk about 'networking,' campers probably invented the term,

Jeff gave me his card ... he's a State Representative for Oregon (6th term in office) and a "retired cop." Defining the pay scale of State Representatives in Oregon, he described his work as "community service!"  Vicky's preparing decorations for her 50th High School reunion, so we also talked about how well our brains 'remember' our high school classmates, even after 50 years!

Wednesday 8/21 - temperature about 90 and a little heavy feeling with a few rain clouds in the sky along with the smokey haze reminding us that this is extreme fire season all over this beautiful State.

I'm off to downtown Ashland, camera and Lacy in tow, to check out Lithia Park and other interesting sights.  Upon first inspection a couple of days ago, Ashland is not only the home of the Oregon Shakespeare Festival, but also a 'college town,' home of Southern Oregon University, formerly called Southern Oregon College and  Southern Oregon State College, a public liberal arts institution, founded in 1926 with an enrollment of about 7,000.

Took about a two hour drive around the area in Petunia Smart Car with Lacy ... even drove north to Medford to check out Harry and David - what an operation - I hope to go back for a tour and pictures.


Here's what Eleanor and Lincoln do while Lacy and I explore: 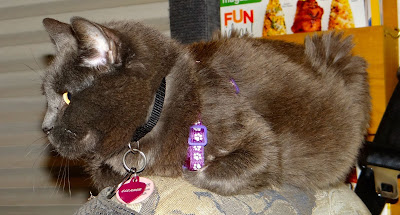 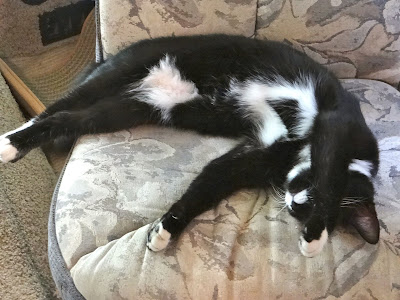 Driving into the town of Ashland I'd seen this old cemetery and decided to go back and take a look: 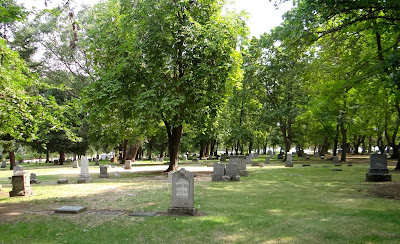 Here's a close up of one headstone 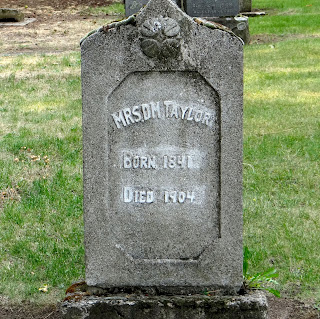 I've always liked to visit cemeteries - no woo-hoo stuff, just an interest in history.  While living in Lourmarin, France several years ago I visited the cemetery there and, lo and behold, came upon the burial place of the great French philosopher, Albert Camus.
Also, when I was in middle school, back in the dark ages, my friends and I liked to visit the cemetery in Santa Clara, CA on our way to and from school.  Later I'll share some  funny stories about cemeteries and my military dad.

Medford is only about 10 miles north of Ashland, so we drove there just to look around a little and came upon an art studio (in Tenant a couple of miles south of Medford) with this "beginning of a sculpture" in the parking lot.  The sign on the building, "Tenant Art Studio." 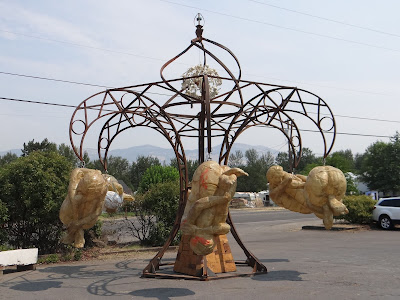 The figures circling on this stabile are constructed of metal and some kind of treated paper-like
material - a 'pattern.'  Unfortunately there's also some graffiti noticeable too. 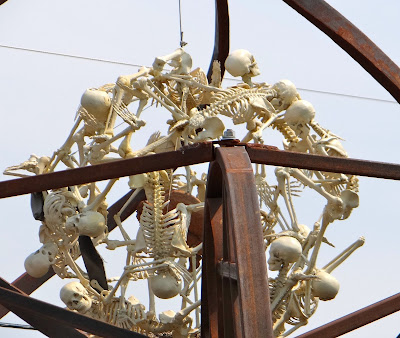 A close up of the center top fulcrum thing - being somewhat familiar with anatomy, I'd say those skeletons are pretty accurate!

We drove back into the downtown tourist area of Ashland; our intent for this foray was to take a walk in the famous Lithia Park.  Below is one entrance to the park - a beautiful walking bridge over another babbling brook ... 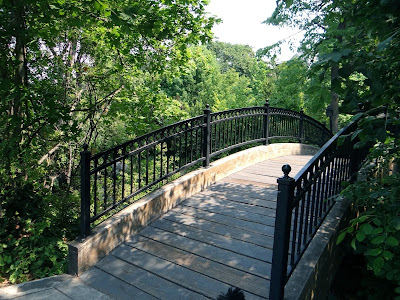 Although we rarely use it, I carries a leash for Lacy in case there's a leash law but, as we neared the bridge, I saw this sign .... no visit today; I'll return another day, without my side-kick ... 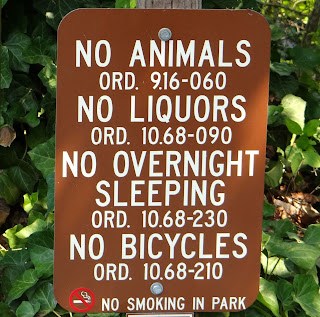 And, here is an entrance to Southern Oregon University, the school I spoke of earlier.  It's really a lovely campus sprawling over several blocks of Ashland.  And, Ashland truly has a college-town atmosphere:  bike lanes on almost every street, organic grocery stores, coffee shops, tattoo parlors (what town is without them these days?) and lots of student-moms and dads pushing perambulators (strollers) attired in the interesting costumes  of young intellectuals!  It reminds me of the UC Berkeley atmosphere - and I love it! 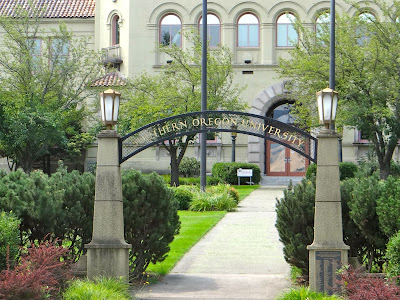