How do a 'recent' cousin and 'new' friends go together.  Here's the story:

I've mentioned several times that I went to Guatemala in 2011, ostensibly for three weeks of Spanish lessons.  Well, by the end of week two I knew darn well I was not going to be able to speak Spanish in three weeks.  And, because I had retired the week I left for Antigua, I realized I didn't HAVE to go home right away.  I kind of promised myself I'd 'stay until I could speak with some semblance of knowledge.  Well, I stayed for almost a year and a half!

During my extended learning process I also did lots of volunteer work, which I'll talk more about in a later blog; suffice it to say, Guatemala is an economically very poor country with lots of need for volunteers to help bring them into the 21st century.  However, it's very rich in many ways and I loved my time there.

Back to my story ....  I was invited to attend a Christmas party (2011) at one of the Foundations for which I volunteered.  I went with my good Guatemala friend, Deet.  She's a Gringo whose lived in Antigua for 20 years and knows everybody, so she's introduced me to lots of ex-pats, Guatemalans and others.  My curiosity was peaked when she presented me to her friend, Linda C.  Why?  Because Linda's last name is the family name of my long-since-deceased mother.  She explained to me that it was her maiden name.  Long story short, we're cousins who'd never met before that introduction in Guatemala!

Linda and I became instantaneously BFFs; she now lives permanently in Antigua but travels all over the World from there.  We found that we're not only kin but kindred spirits too.  We share the love of anything having to do with food:  reading about and studying, cooking, baking, entertaining.  We also both love to read and have varied but similar tastes in reading.  And, we're both swimmers.  Linda is a treasure in my life.

How does this story relate to my stay in Ashland, Oregon?  I've shared about my new friends, Richard and Joyce; I originally met them in Antigua at Linda's beautiful home at a dinner party given in their honor.  They were in Guatemala in November 2012 working with the Foundation they founded in the 80s and continue to direct, Legacy Foundation www.legacyfound.org/‎,  a wonderful non-profit organization helping people and communities, through teaching and support, in, I think, 65 countries around the World.  They're friends of Linda's, and now friends of mine too.

So, shortly before I left Guatemala for home Linda hosted a delightful dinner party for them and I was invited.  Voila!  A month ago, Linda let them know I'd be traveling through Ashland; Joyce emailed an invitation and the rest is contained in the posts and photos of their wonderful hospitality and beautiful Ashland aurroundings. 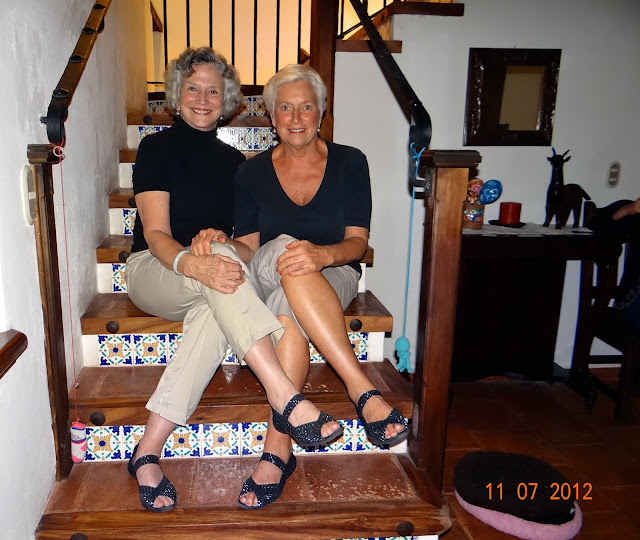 A 'staged' photo op for MP and Cuz Linda, both wearing shoes Linda had bought in Chicago, while she was 'home' a month earlier.  The setting is her magnificent Colonial home in Antigua.
Posted by mps2343 at 11:44 AM