Furnaces and Fire Fighters and Trampolines


Yesterday I met the two ladies who own the Monaco 40 foot motor home that I mentioned was boon docking near my full hook up site fat Camping World in Kaysville, Utah – about 20 miles north of Salt Lake City.  They invited me over for a ‘glass of wine’ yesterday afternoon; we had a really nice visit and I learned so much more about RV life and motor homes in general.  I am continuously thankful to really seasoned RVers for sharing their experiences and knowledge.  I figure my learning curve is still a very steep uphill climb.  I’m not sure I’ll ever be over the hump!

The furnace, with all its new parts, had been short-cycling but functioning fairly okay over the weekend; but, and I’m thankful it happened while I was still here, when I went to bed last night it was about 68 degrees in the ‘house;’ when I awoke this morning it was 51!  The heater was not working and we were cold!

Once again I prepared Floribunda for the short drive to the service bay at Camping World.  For
non-RV folks that means that everything has to be stowed securely, lines (electricity, water, sewage) disconnected and stowed, levelers retracted, cats securely enclosed in the bedroom with their litter box, water and food, etc.  Each time it takes 30-40 minutes depending on how well I’ve kept up with neatness!  Lacy goes with me and we find things that we can do together.

About 9:30 they came to take Floribunda to the hospital(!) – oops, that the nurse speaking.  Long story short, they found it needed a new motor.  So, I had a heart-to-heart discussion with the service rep and suggested he talk to the General Manager to give me some viable options for how to proceed.

What they offered first was to take out all the parts they’d installed and sell me a new furnace for about $550 (that’s on top of the $820 I’ve already paid them).  That would be just about exactly what it would have cost if they’d known the motor was going to go out and had put in a new furnace to begin with (excluding some labor charges).  However, we both agreed that the thermostat would have had to be replaced in either case, so that would make the new furnace total somewhat more.  Or, the second offer was to buy a new motor for $127 and keep all the other parts they’ve already replaced.  I talked with the several RVers I’ve met here in our “RV Park” and I also asked the service rep to tell me what he would do in the same circumstances.  Surprise, surprise, he said he’d go for the new motor.

So, CW management has said I can stay here as long as I want, give the new parts and service a good trial period and if I’m not satisfied they’ll credit me for all the parts they’ve installed and put in a completely new furnace (that they’ve already brought in and will keep my name on it for a while) with no labor charges.  At this time essentially the entire furnace has been replaced except the combustion chamber; my ‘decision-making-helpers’ seem to agree that the chances of a problem developing in the combustion chamber are rare indeed.

So, it’s done.  Now I can relax in my free RV site and get out there and do the tourist stuff I’ve been wanting to get to.

Today, after the decision was made, Lacy and I went to the park for some outdoor activity.  As we were driving back to CW, we came upon the Kaysville Fire Department giving some good photo opportunities.  The Fire chief noticed me taking pix and came over to explain that this was a training exercise for two fire fighters, one man and one woman.  It was fun to watch.... 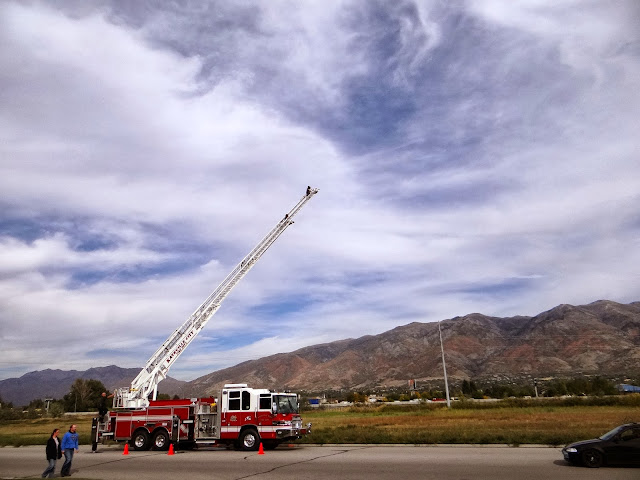 Here's the Kaysville Fire Department in a training activity for four fire fighters:  three men and one woman.  I watched the man and woman fire fighters climbing the ladder.  It's HIGH.  The female is at the top and the male is about 10 or 12 feet lower on the ladder. 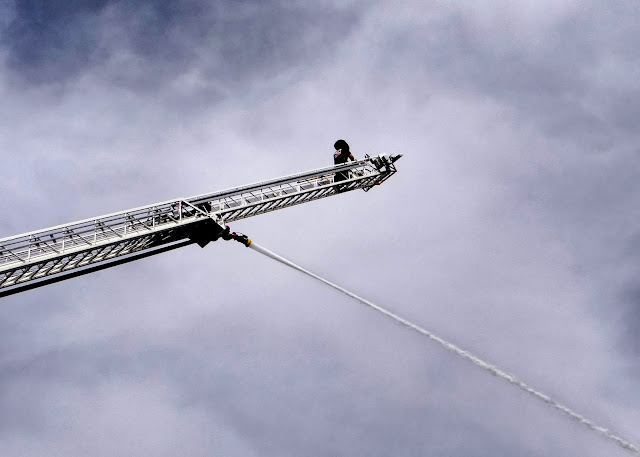 Two male fire fighters stayed at the truck managing the security issues of the ladder and truck and the water being drawn from a fire hydrant into holding tanks on the truck and from there up to the hose.
The person handling the hose has control over the type of stream and the volume and pressure of the water. 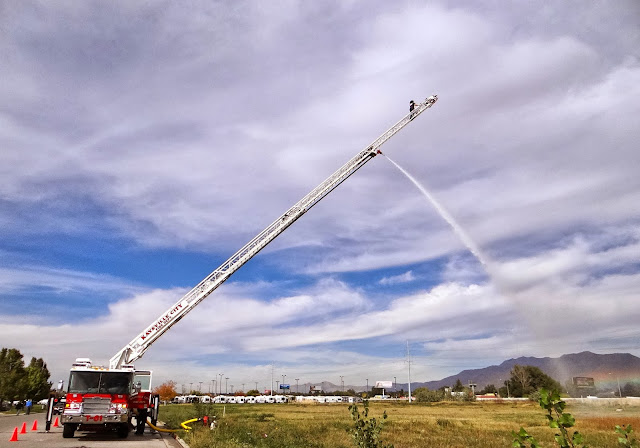 This head-on photo shows the stantions (sp?) extended on both sides of the fire truck that counter balance the weight on the ladder 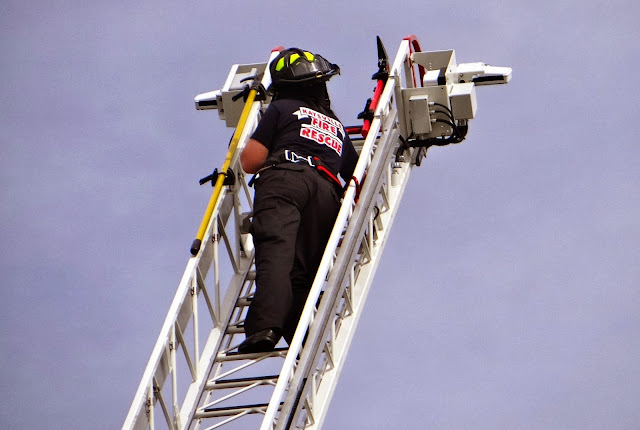 I actually watched the two climb the ladder; as the woman was nearing the top (or end) of the ladder, she slowed down considerably.  I would have too!

Then we drove to a building I'd noticed in this industrial complex area where CW is located.  The building has a big sign on the side identifying it as "Trampoline World."  I drove there, it was closed, but they let me go in to take a look around.  What a wonderland.  It's a huge sports complex with all indoor activities:  trampolines, gymnastics floors, parallel bars over rubberized flooring, indoor soccer field, basketball courts.  While I was walking around I noticed some young men practicing football and was told they're college football players doing specific training exercises indoors.  They have programs for mothers and toddlers, facilities for sports complex birthday parties.  It's even possible to rent the whole complex with staff for private large group parties - about $750 for 4 hours. 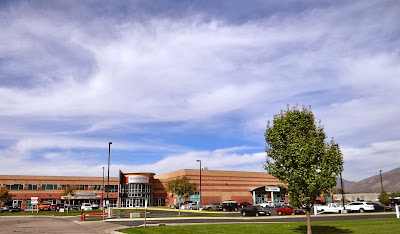 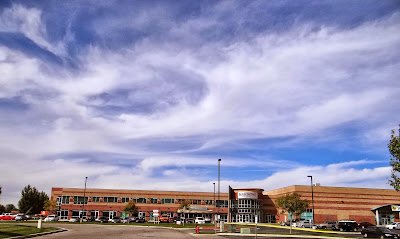 And, here's the door for just the 30 or more trampolines 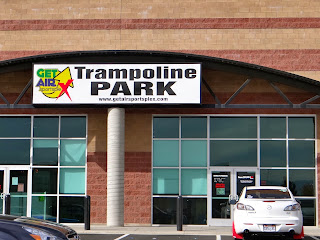 And, one more project:  I took the drapes that cover Floribunda's front windows to the dry cleaners today.  Tonight we're without window coverings.  After their long day in the bedroom both kitties took advantage of the dash area sans covers ... 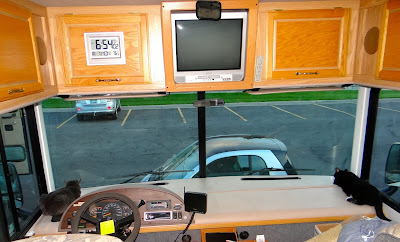 And, that's Petunia right outside!