We left Camping World in Kaysville, UT on Saturday - 9 free nights of full hook-up in return for a grand of RV work!

Saturday we had Camping World fill the LP - first time since I bought the rig - and we headed all the way to Provo, about 65 miles, and parked at a Walmart; so another free night.  I treated myself to a steak dinner at Applebee's - ate half in the restaurant and half last night!  Other than that I did a lot of reading and bought a couple of reversible rugs for the bathroom at a local Bed, Bath and Beyond.

Sunday we left Walmart before 9 to drive to Cedar City, about 230 miles.  That's a long haul for us; Utah's I-15 has posted 75 and 80 mph speed limits, but I chug along at 55 and maybe 60 because I think it's better on gas mileage and I can use all the help I can get!  Utah doesn't have very many state operated rest areas; what they do have are "private public rest areas,"  right off the freeway, usually a Flying J or the like, along with a Dairy Queen, Subway, etc.  I try to use them because there's guaranteed good access in and out of the parking lot!  I like room!

We stopped at one of these rest areas and I pulled in between two goliath truck-trailer guys, parked and walked into the convenience store to buy a cup of coffee.  As I was returning to the rig a Flying J uniformed man stopped me and said, "Your right front tire is low.  When you're ready to leave, drive by the garage and I'll check all you tire pressures and put some air in that tire."  I said, "I just asked the guy at Camping World yesterday if my right front tire seemed low and he said, "No it looks okay." Go figure!

So a few minutes later I drove to the garage and he checked; the pressure was down almost 40psi!  Geez!  Then he showed me that the same tire is really really wearing badly.  I told him that they'd checked that in California at Camping World and told me I had about 5,000 more miles on the tires.  Even I could see that tire was worn out.  So I bought two new front tires and they mounted them in about 20 minutes.  He gave me a Good Sam 10% discount and didn't charge anything for mounting, balancing or discarding the two old tires.  I examined those two tires when they were off the rig and I was very relieved that he'd encouraged me to buy.  I don't think I was taken.  But, more money!!!

Later I was driving along and stopped at another public-private rest area and turned on the water pump to wash a couple of dishes.  All of a sudden the water just stopped.  Okay, now what's that?  I got out and checked; the fresh tank looked about 75% full - just as was indicated on the panel.  Must be the water pump!  Great, now how much is that going to cost?

I decided, like Scarlet O'Hara .... "I'll think about it tomorrow."  We drove into a Walmart Supercenter in Cedar City at about 2 in the afternoon and settled down.  The weather was cloudy, windy and pretty cold so we just hunkered in and had an early dinner of MP's spaghetti (Lacy loves spaghetti sauce on her dry dog food) with left-over Applebee's steak.  Left the dirty dishes to do when we figure out what's going on with the water.  I'm really getting to like boon-docking but I do need water!

This morning, after a lovely night's sleep, thanks to quieted winds and some good rain-drop sleeping inducement, I called a  local RV repair shop.  The owner said they'd take a look at the water pump, t bu fuse that cost $1.00!!!!!  Finally, some good luck coming my way.  All in all it took about 10 minutes and we were on our way.

But where to?  I needed more information about the availability of the National Parks and Monuments in this area.  I called a Passport America RV Park just about 15 miles south on I-15; yes they have a pull through full hookup.  And, yes, they'll honor the PA - this is the first time I've been able to use the card and she didn't even ask to see it!  This is teeny tiny town (I use the term loosely) with no services except a post office that's open one hour a day.  Later, I'm going to take a walk and shoot some photos.

The owner, Gail, suggests that I drive Petunia to the National Parks as there are restrictions as to where you can drive a rig towing a car.  I'm happy to drive Petunia; but first I need to find out if I can take Lacy with me like we did at Crater Lake.  She says  Bryce Canyon National Park is about an hour and a half from here and then I can come back on another road and hit Cedar Breaks National Monument.  Lots of people do both parks in one day, she says.  Then I can also head to Zion Kolob (North Zion NP) and also the Main Zion NP too while camping her.

Today I'm just going to hang out and walk around here and take some photos. 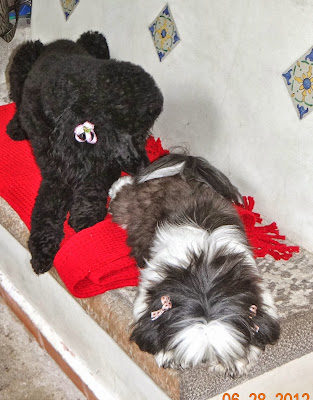