Idaho to Utah ... and ... Dental Diligence is Utterly Useful in Utah …

Tuesday 9PM
Among other issues and happenings of the last few days, I’ve noticed a kind of tender spot in my mouth near a crown that my dentist had told me would need to be replaced sometime within the next few years.  I’m becoming a little paranoid about not taking advantage of help when it’s close at hand(!); so when I awoke this morning and thought it might be feeling a bit more tender than yesterday,  I made an appointment with a dentist in Brigham City to check and see if there’s anything to be concerned about.   I surfed online and called the first name on the list of local practices … Jody A., DDS … I thought to myself, that sounds like a nice, young, female dentist and should be just fine; so I talked with the secretary and she said the dentist could see me at 2.  I knew that if I were to need some work I’d need to stay in this area a couple more days so I paid the camp host for two more nights here at Willard Bay SP.

I drove in to Brigham, about 5 miles from here and found the dental office easily; this Mormon-developed city planning makes it very easy to find your way around.  I remember the first time I visited Salt Lake City many years ago, I was so impressed with the wide, wide streets, laid out in a perfectly perpendicular fashion.  During a tour of the Mormon Tabernacle during that visit the guide informed us that when Brigham Young arrived in the region and designated it, "This is the place," he ordered the streets to be constructed so that horse-drawn wagons could 'comfortably' turn around in every street.  It looks like that consideration has been employed in other areas of Utah also.  All the streets in Brigham are wide and very well laid out.
I was surprised when Dr. Jody A. came into the exam room to introduce himself.  So much for making assumptions based on a name! He was very personable, checked the x-rays his assistant had taken, and conducted an examination of my mouth, finding nothing amiss except a little redness and irritation in the gum area.  No need for any work to be done.  That’s nice I’d say!  His thought was that I probably ate something that irritated my gum and it simply needs to heal.

I'd noticed a portrait - type picture in the waiting room before being seen, but I didn't really pay attention to it.  As I was leaving after the appointment I took another look at that family portrait; Dr. Jody A, his wife and their 13 children!   Totally acceptable and not uncommon in Utah.  [My daughter, Kari, says that when she's asked how many children she has, she's quick to say that the last three of the six came at one time; she didn't plan it that way!]

Late yesterday afternoon I drove to a Walmart Super-Center in Brigham but didn’t notice much else about town; so today I decided to drive around and get a feel for the area.  The population is about 18,000; it’s not a big metropolis but it is spread out along the base of a very interesting portion of the Wasatch Mountain range that extends from southern Idaho through much of Utah.  As you’ve probably noticed, I love skies, clouds and mountains; and take lots of pix of those charms of nature.
I come from California, a state of many eco-systems, but it doesn't stop me from being so impressed with the beauty of all the other states in our Union.  It really makes travel on the ground so fulfilling; I love the changes I come upon as I move from place to place. 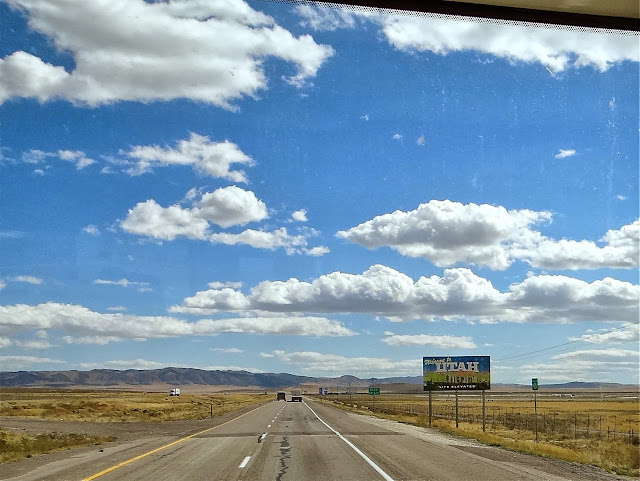 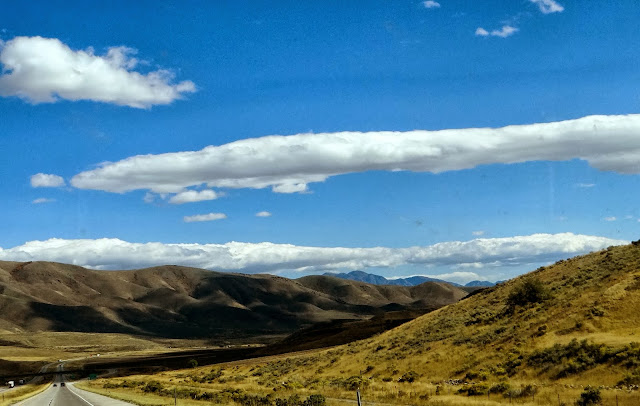 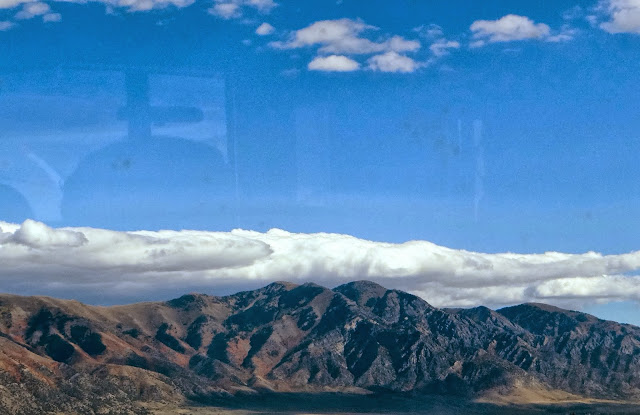 More mountains, seen through the windshield

And more mountains - check the colors and stripes 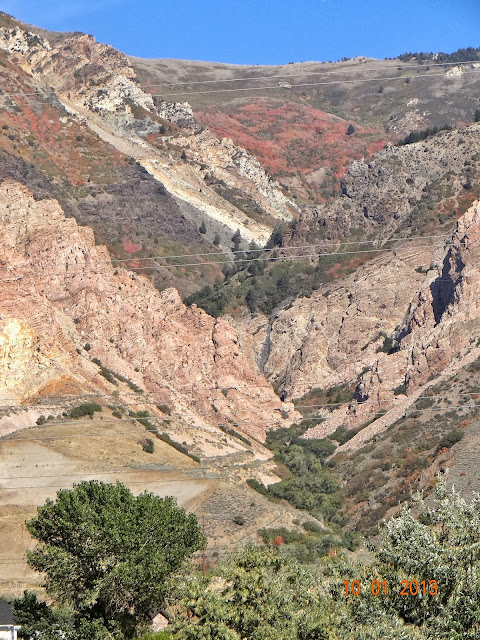 This is a close up of the mountains I see from my camp - Unfortunately there are power lines I couldn't get moved for the photo op! 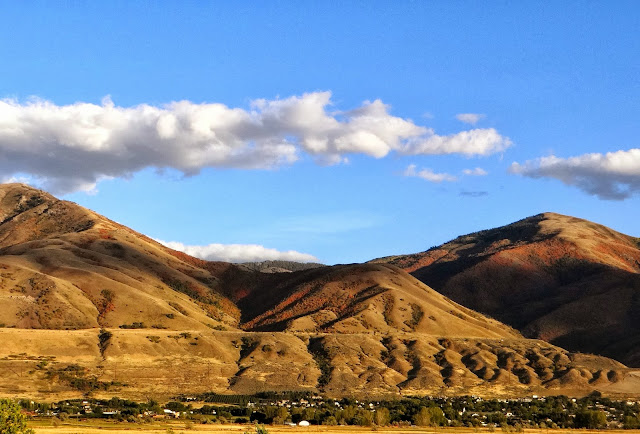 This is Brigham City, nestled against the Wasatch Mountain range 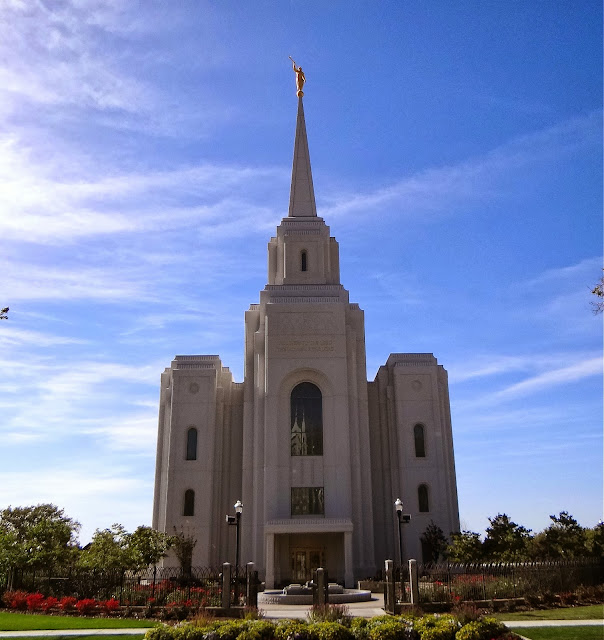 This is the 'new' Brigham City Tabernacle - Directly across the nice, wide street is ... 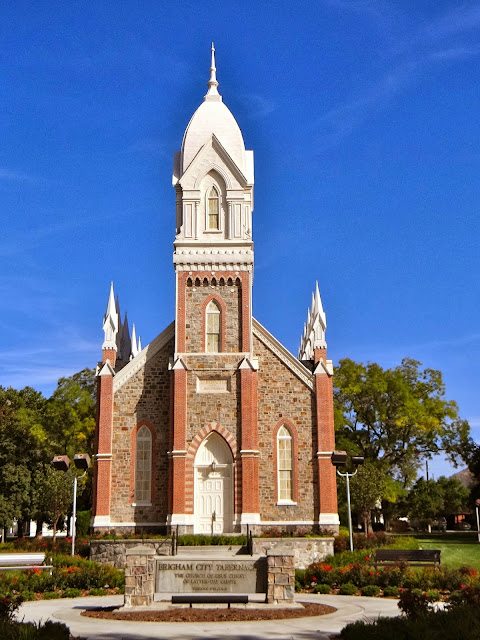 The straight-on shots are impressive, but the profiles of these buildings are fabulous 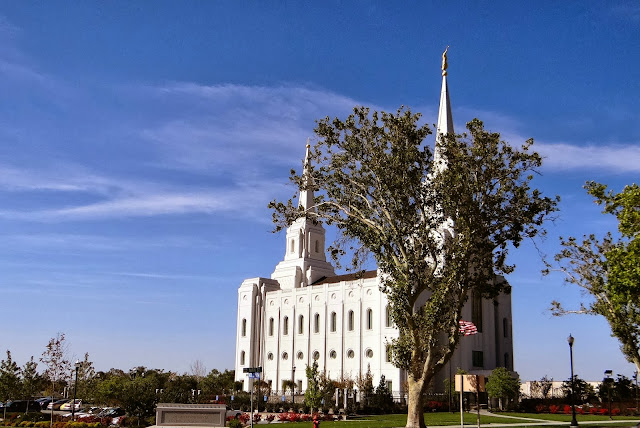 Another time I felt photographically-challenged.  I wasn't able to situate myself in such a way that I could get the gorgeous side view of the building without a tree in the way.  It's still magnificent. 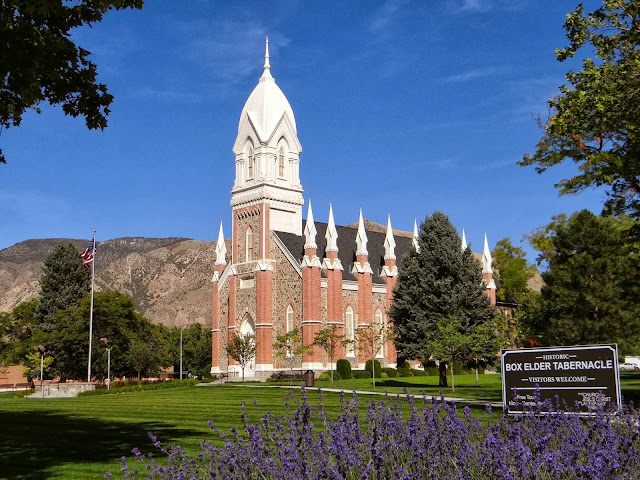 The historic 'old' tabernacle is now called the "Box Elder Tabernacle."  Isn't it lovely with that mountainous background? 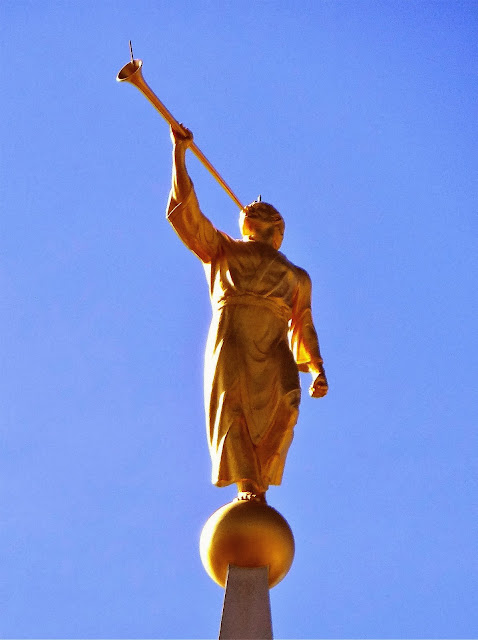 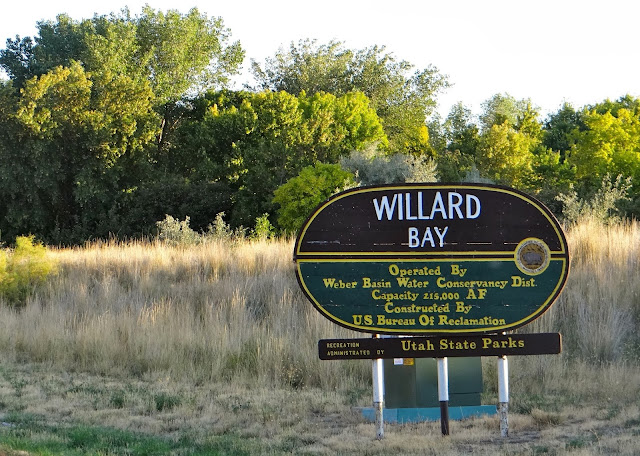 As I drove back in to Willard Bay SP I thought I'd take a ride around.  It's a big park on the shores of the great Salt Lake - but it's almost completely deserted now.  In the Cottonwood campground, in which I'm staying, there are about 50 sites and 4 RVs!

I drove out to look at Salt Lake from one of the picnic areas - not much to look at and nobody at all in the day-use areas.  But, as I was driving back to my site I noticed the following:

Can you tell what these are? 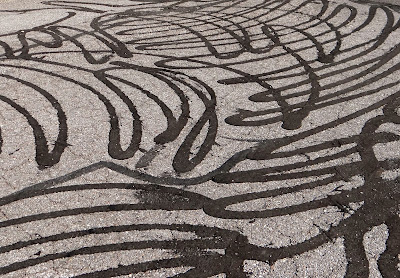 Yes, they're road repairs!  Somebody was making his / her job more interesting and fulfilling! 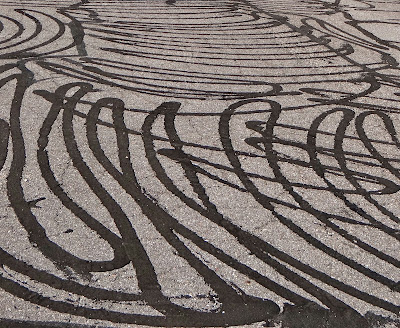 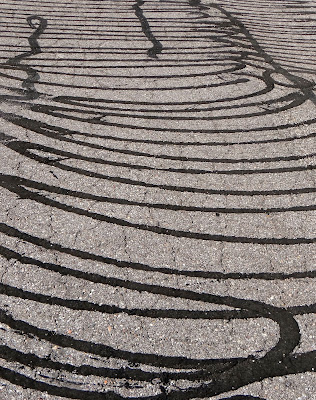