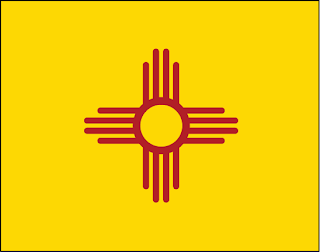 An ancient symbol of the sun as found on a  water jar from Zia Pueblo
A "Zia" and is centered on a field of yellow - it represents the circle of life  - Four is the sacred
number of the Zia - four points radiating from the circle - representing:
*North, South, East, West.
*Spring, Summer, Autumn and Winter
*Sunrise, Noon, Sunset, Midnight
*Childhood, Youth, Adulthood, Old Age
*Development of a Strong Body,  Clear Mind, Pure Spirit, Devotion to the Welfare of People
and Family
The red and yellow colors are the colors of Isabel of Castilla brought to the continent by the Spanish Conquistadors.

Great Seal of the State of New Mexico: 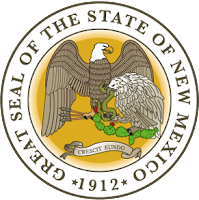 I decided yesterday that today would be a stay-at-home-get-lots-of-learning-done on things like blog design, template and layout.  I'm not yet satisfied with the overall look of Butterflies and Heart Songs; so, this morning I made up a "test blog" to try out lots of new design ideas.  We'll see how it goes.

How this day started and is progressing ...

Well, first of all, I didn't sleep well last night - could it have been the double chocolate gelato I ate at about 9:30?  I wonder!   So, I was happy that we all slept in until almost 8 this morning; I get no complaining from my traveling crew when I decide we should sleep in!  When we did get moving we found that, not only was it darn chilly inside Floribunda, but there wasn't any hot water, either.  Oh, oh - I immediately felt another learning experience coming on:  I'd forgotten to check the LP gas level before I parked and set up the rig a couple of days ago.  Guess I'd better add that little note to my 'pre-travel' checklist before taking off for a new location.

So, I disconnected everything outside, cleaned, packed and stowed all inside, moved Petunia out of the way, and found out from Bill, the manager, where I could buy propane.  Off we went, only about five miles east on the historic Route 66, to Country Gas, where they filled me up with 18 gallons.  The guy explained that, although Floribunda has a 24-gallon propane tank, you never want to completely fill it.  Just something else I hadn't known before.  By the time all was said and done, I'd used up about 2 and a half hours of my day.  Oh, yes, I'm retired.  I keep forgetting!

I think I've mentioned that I've visited Santa Fe previously; so I won't return there - at least not on this go-around.  I've checked out some points of interest and will probably head into the downtown area tomorrow.  I'm not up for any big museum hopping; I'll visit Old Town and check out a few galleries and shops.  But the thing that peaked my interest - and here I'll have to admit that I understand that my fascination is a little skewed - the Albuquerque  International Rattlesnake Museum.  I am totally fascinated with reptiles, especially snakes.  That's not to say I don't have fear.  Yes, I do; but I also have a keen curiosity.  I'll try to get some good photos of the resident species and I understand I may qualify for a "certificate for braving this large collection of rattling reptiles," according to the New Mexico Vacation Guide.

A little more on the subject of snakes ....

Years ago, somewhere around 1990, I visited New Orleans, accompanying my husband on a business trip.  He was participating in a big Data Processing Conference, I don't remember which one.  While he conducted his business I spent several wonderful days sight-seeing, taking cooking lessons and generally having a good time.1  However, I also spent time at his convention and met Jim Fowler, host of "Mutual of Omaha's Wild Kingdom," after the death of Marlin Perkins, its original host.  Mr. Fowler was an attraction at the conference/convention; he brought with him several animals featured on the TV show.  I was fascinated with all of them and had several pictures taken, as mementoes, with individual animals, and Jim Fowler.

My favorite picture is of Jim and myself with a 25-foot python wrapped around our shoulders.  Was I fearful?  You bet.  But Jim explained that pythons are very docile -  when well-fed.  This guy was heavy and very quiet.

Another experience was when visiting India's Taj Mahal.  After having toured the palace and grounds, we returned to our mini-bus to leave Agra.  As I was waiting in the bus for the rest of the group to return, I noticed a 'snake charmer' right outside my window.  He 'charmed' three 'dancing' cobras in a large basket that was sitting in a highly populated tourist area.  I surmised that the cobras had to be harmless so I exited the bus, to the consternation of my co-travelers, to check out the performance.   Yes, they'd been de-fanged and were harmless as well as mesmerized by the flute he played.  My friends thought I was crazy; I think it was a once-in-a-lifetime chance to get close to a cobra, or three - safely.