I wake up this morning to the sound of birds with sunshine peeking in my bedroom window.  I don’t have to be anywhere, do anything, act anyhow – I’m free.  The ‘kids’ and I love our little house on wheels; Lacy and Lincoln are up for a little sightseeing walk around the park, which at this moment is occupied by only a few campers.  But, this is the beginning of Labor Day weekend, so I expect there will be several arrivals today.

So far I’ve had no luck with either WiFi or cellular reception; hence blog posts for the time being will be written in Word; then copied into the blog when possible.  One of my suggestions to myself before starting this adventure was to check out the landscape / sights, whatever it may be, at the beginning of a stay in a new place.  Then, if there’s something I just must see again I have time to do it without changing whatever plans I may have for later.  So, after walks and tidying up, Lacy and I hop into Petunia for a drive to Crater Lake (about 34 miles) and scope out the possibility of driving the entire rim road around the crater to get the best views from all angles.

As we drive out onto Hwy 62 to head East I notice the sign for the town of Prospect and decide now is a great time to get the lay of the land here too. 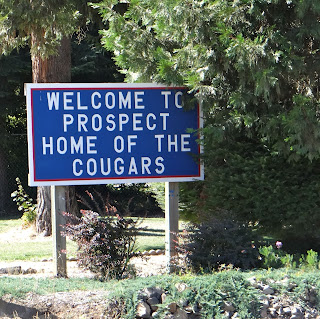 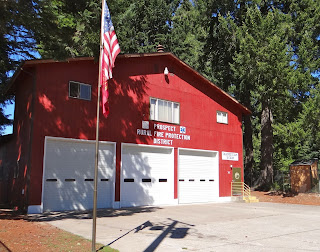 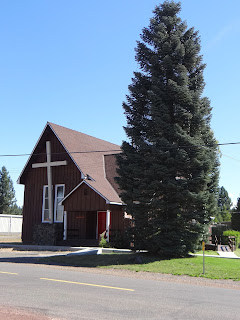 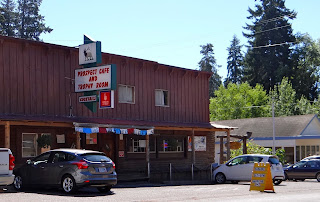 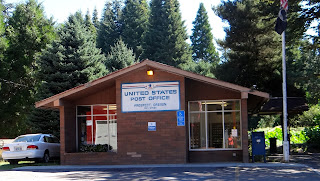 There's also a general store and a school - may be a grammar and high school combination - home of the Cougars!

After a couple of photo ops we head out onto 62 for the spectacular views on the way to Crater Lake National Park.  As I would expect, the drive takes a little time: curvy, uphill and only one lane going each way.  But, the beauty and majesty of Oregon is splendiferous – the blue of the sky, the white of the clouds, the green of hundreds, maybe thousands, of square miles of conifer forests. 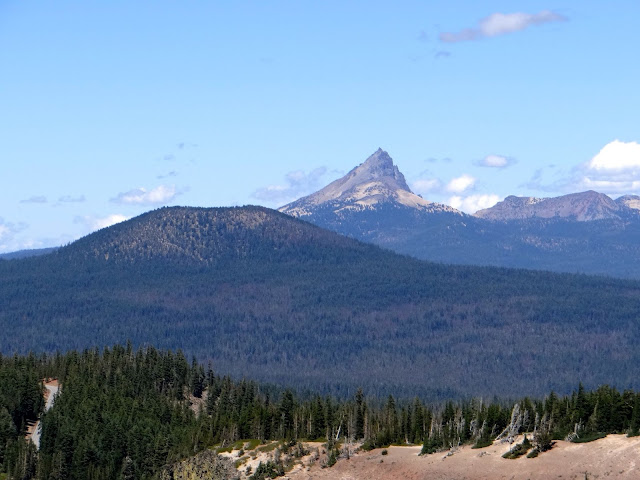 What a magnificent landscape ... 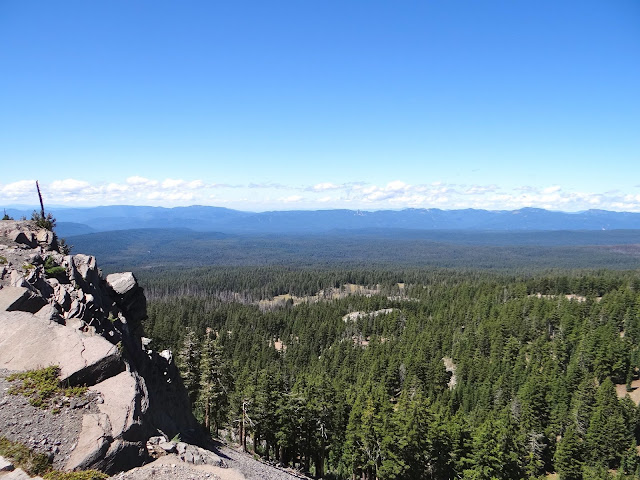 The mighty Rogue River begins in this part of Oregon - on the north side of Crater Lake; and flows 215 circuitous miles through lava tubes, etc. to meet with the Pacific Ocean at Gold Beach, Oregon.  The Rogue River is particularly popular with campers, fishermen and white water rafters.
About 11 miles north of Prospect on Hay 62 is a wonderful lookout to the Rogue River Gorge ...  Scientists believe that the gorge was formed by the river flowing over, under and through lava tubes all along the High Cascade mountain range.  From its beginning the river drops over a mile in altitude to flow into the Pacific. 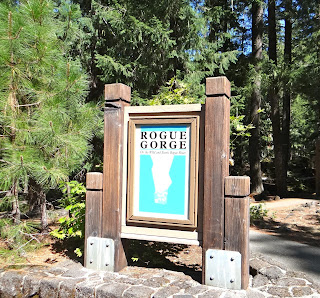 The are quiet pools of fresh cold water 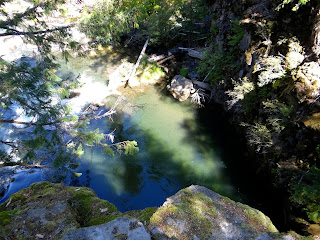 And, there are many opportunities to view fast-moving water areas 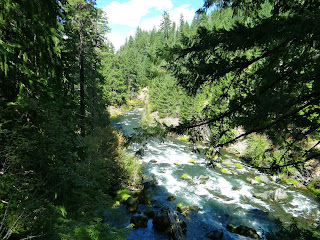 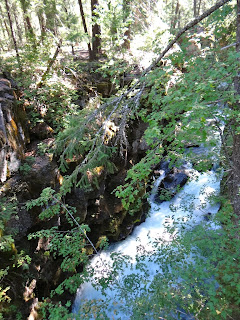 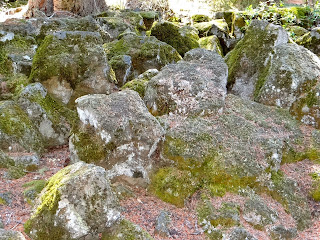 I show my lifetime “Golden Age Pass” to the young park ranger and she directs us pass all the cars waiting to pay the park entrance fee.   Hooray for aging!   We make a leisurely day of driving, stopping to gaze wondrously on this incredible work of nature.

Over eons of time Mount Mazama had pushed its way up towards the sky forming a volcano that erupted 8,000 years ago, then collapsed into itself causing a great crater that filled with water creating Crater Lake.  At least that’s the story in really short form!  This spectacle has taken millions of years to make!
I never cease to be amazed at the diversity and magnificence of Nature.

This is the first view of Crater Lake ......  This photo has not been enhanced!  Some people describe the color a purple but this is exactly what I saw .... 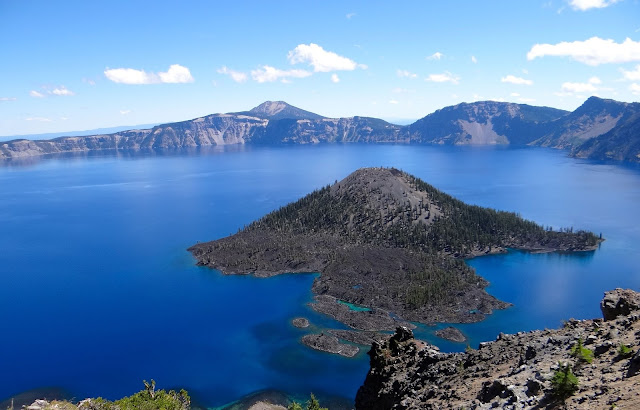 Trying out the panoramic setting on my camera .....

I take over 40 photos of this wonder as we drive clockwise around the 33 mile rim of the caldera.  At times little Petunia hugs the road, not wanting to spill over the side and down several hundred feet to the water.  Each time we exit the car I make sure the emergency brake is engaged and Lacy is right next to me.  It's a bit intimidating!  By the way, there are two islands in Crater Lake:  the larger is Wizard Island and the smaller is Lost Ship Island; both were created by further volcanic activity after the eruption that formed the lake.


At this time, just a year ago, I was living in Guatemala when El Fuego, Antigua’s local volcano, erupted and spewed hot lava for days and days.  It was the second gigantic eruption in a year and I witnessed both.  El Fuego has always been an ‘active’ volcano; most mornings I could watch her/him belch smoke into the clear blue sky from my bedroom window.   I hadn’t previously had the experience of living and carrying on daily activities right next to a spewing giant.  The two massive eruptions of 2012 brought volcanologists from around the World to research this wonder.  Guatemala has a long history of volcanic eruptions, earthquakes and floods; the indigenous peoples, the Maya, have lived with the devastation caused by these natural disasters, believing that it is the will of the gods that they endure when the gods become angry, sad, happy – whatever.
Approximately 40,000 people were evacuated when the lava spewed down the western slopes for miles; fortunately there were no fatalities.  I had the opportunity to go to a restaurant outside of Antigua that faced the western side of El Fuego; when darkness came upon us it was quite a spectacle of red and gold lava and flames that appeared to be coming right in our direction as we sat, safely, in the resort dining room enjoying a gourmet meal. 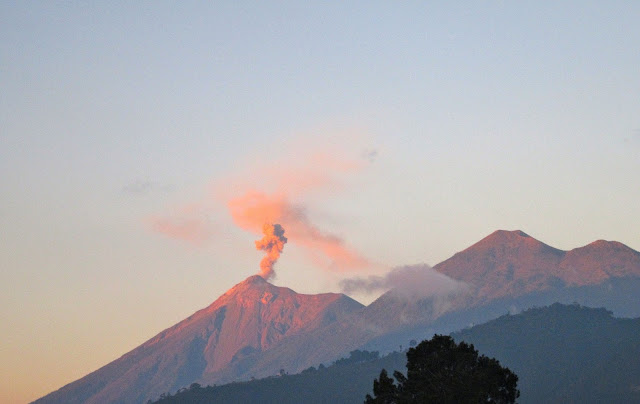 I digress, back to today and Crater Lake.  During this last real week of summer there are lots of tourists visiting; children and adults alike being introduced to one of Nature’s real handicrafts.  Had I visited as a child, this experience would have been the topic of an essay at the beginning of the new school year.

Well, Lacy and I have enjoyed this day to the max and Lacy has so many new friends from around the World!  Dogs. like Lacy, make conversations with strangers so much fun!
Posted by mps2343 at 1:57 PM