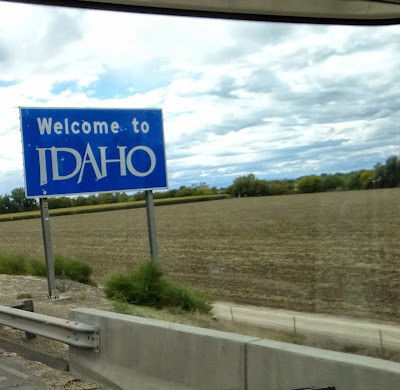 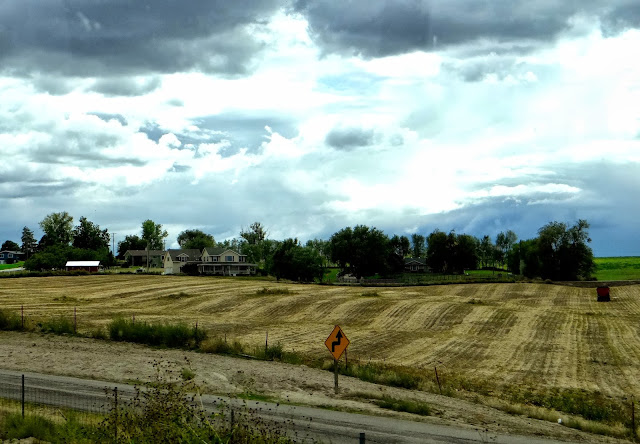 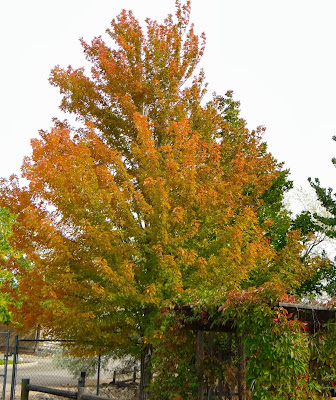 Saturday 8AM ....
Checking in after my second night at Garrity RV Park in Nampa, a suburb of Boise.  The RV park is nothing to speak of as far as beauty is concerned, but it has grass for Lacy, all pull-through parking and is convenient to I-84 E that will lead me to visit Boise downtown today.  Yesterday the gang and I mostly relaxed (which the gang does every day) and I treated myself to a movie, “Lee Daniels:  The Butler” with Forrest Whittaker, Oprah Winfrey and a large supporting cast.  It’s a loosely based true saga of a real White House butler named Eugene Allen, who served in the White House during the administrations of Eisenhower, Kennedy, Nixon, Ford, Carter and Reagan.  I had expected it to be a gentle and kind depiction of a faithful butler; instead I found it memory provoking of several 20th Century eras of American history, some of which we’re not so proud.  Both Whittaker and Winfrey I found superlative in their roles; I'm always surprised to find that Oprah is really a good actress.  And, Forrest Whittaker simply continues with a long list of extraordinary roles played to perfection.  (That's my two thumbs-up for today folks!)

There is a Camping World service center here and I spoke with a service rep yesterday and they aren’t able to even take a look at my backup camera until next Tuesday at the earliest!  I'd hoped that somebody could climb up on the rear of Floribunda to see if the reason the camera's functioning sporadically is simply because of an unsecured connection.  No luck.  Geez!  I’m thinking of making an appointment at Camping World outside Salt Lake City for sometime next week, which would mean I’d have to function as is until we get there.  Frustration!

Later today I plan to take Petunia out for a driving tour of the Capitol and downtown areas of Boise, as I’ve never been here before. Another possibility for today’s entertainment is a visit to World Center for Birds of Prey a little south of the city.  I need to check on activity times.  And, one more idea is to possibly visit to the Basque Museum; I understand the Basque people had / have a strong influence on the culture of this area.  They originally came to Idaho as sheepherders – sounds interesting, to this descendant of a French-Canadian, my mom.  Hopefully I'll have some photos to share.

Petunia and I had a very pleasant foray into downtown Boise to visit the State Capitol and environs. 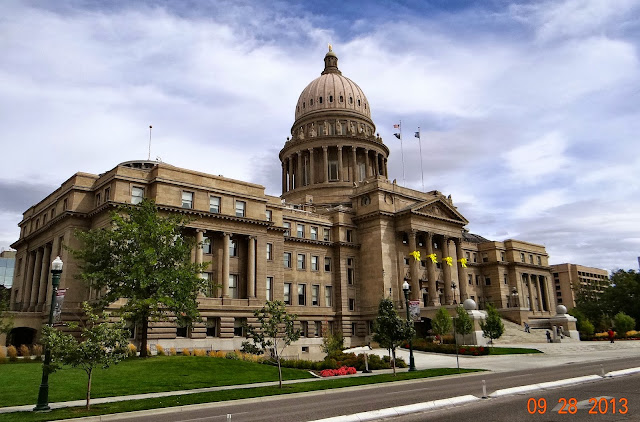 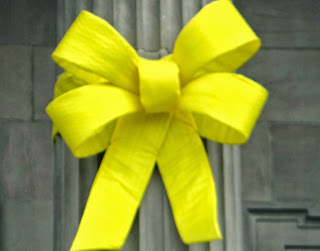 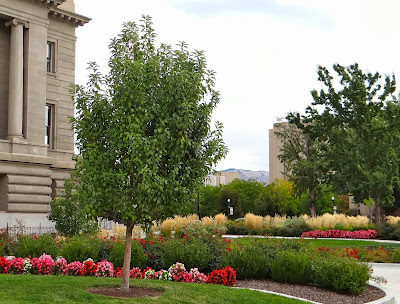 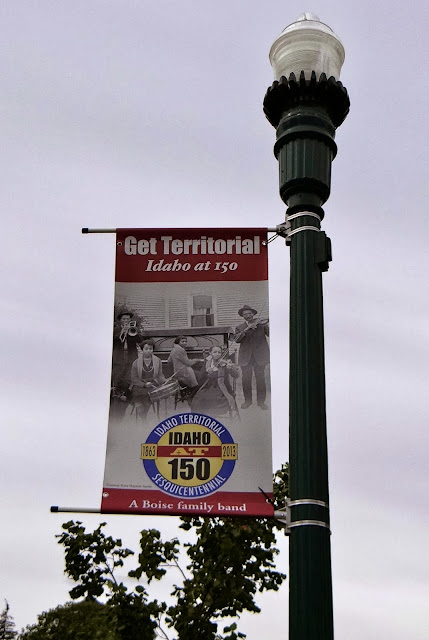 Recognition of the Idaho Territory proclaimed by President Lincoln in 1863 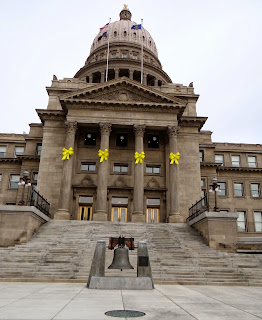 Replica of the Liberty Bell in front of steps to Capitol

Boise is an easy city to drive - however, it is Saturday so no business traffic around the capital.  After visiting the Capitol  I used my iPhone google maps to go to the Basque Museum.  Well, I tried to go there - but actually followed verbal and written directions to a tee - and found myself headed for underground parking at a hotel complex.  So, not wanting to trust google for downtown any more, we headed southwest of downtown Boise to the World Center for Birds of Prey .... 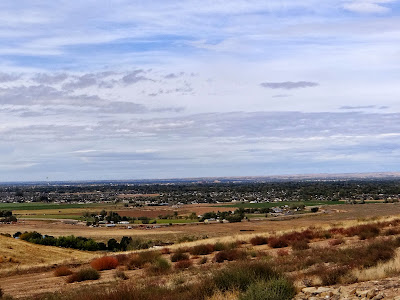 Landscape of countryside and Boise from drive to ... 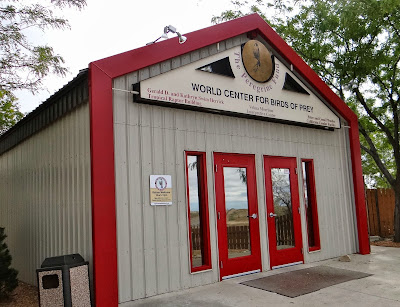 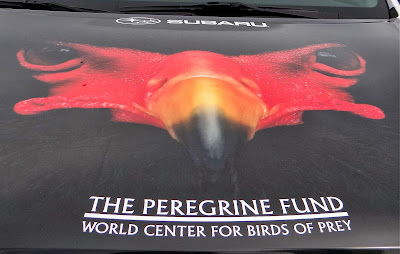 Hood painting on Volunteer vehicle in parking lot of the center.  I'm interested in learning more about The Peregrine Fund as, there's a section of the center dedicated to the work The Peregrine Fund is doing on the Island of Madagascar, off the southeast coast of Africa.  Aside from desiring to enjoy this current North American adventure, my Bucket List's #1 travel destination is Madagascar.  The Peregrine Fund biologists and volunteers are doing massive amounts of work on saving the habitat of so many endangered species on the island.  Many of these animals are not found anywhere else on Earth; saving them in Madagascar is their only hope for survival.
Here at the center are many living examples of birds of prey.  Many of the photos of live birds aren't good examples as the birds are behind screens and cage materials.  All of the birds can be taken out to fly - with supervision. 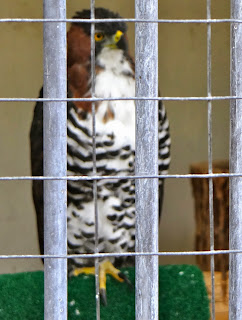 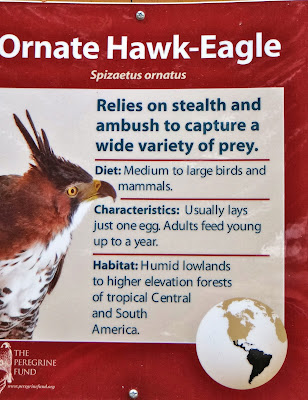 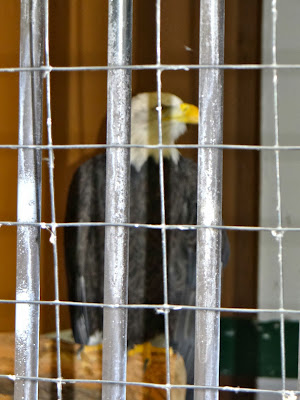 Couldn't get a good photo of the Bateleur Eagle 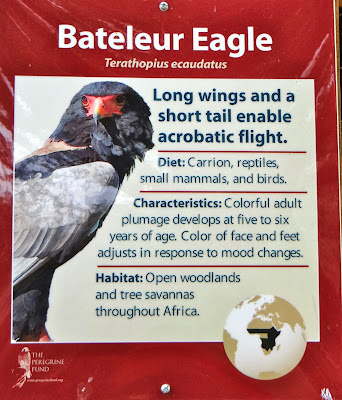 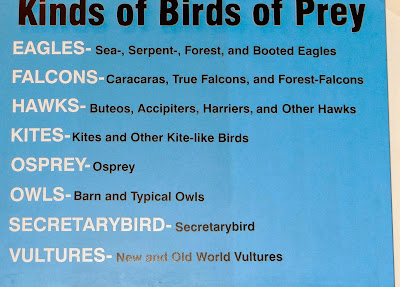 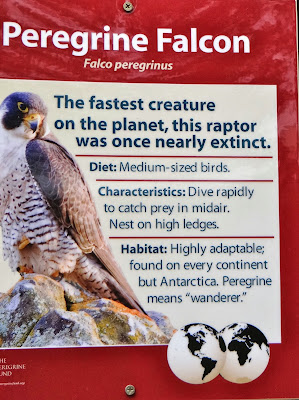 Below is "Condor Condos"  The Peregrine Fund has been intimately involved in the restoration of the California Condor population.  Each of the birds in the exhibit is tagged with his specific number in the line of California Condors successfully
bred, hatched and ultimately released into the wild - close to the Grand Canyon in Arizona. 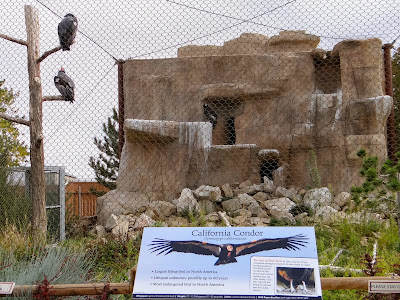 There were three birds in this exhibit: numbers 80 and 92 are on the branches and number 09 is on the condo ledge 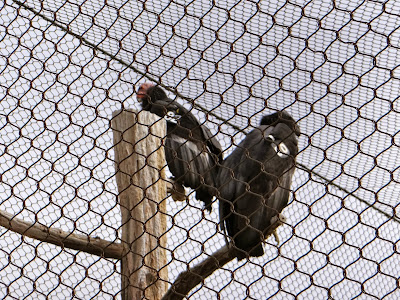 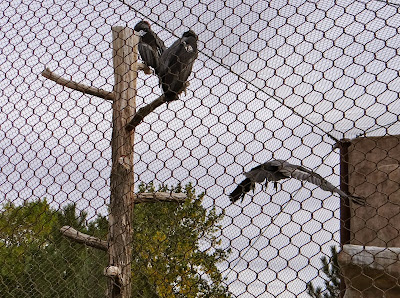 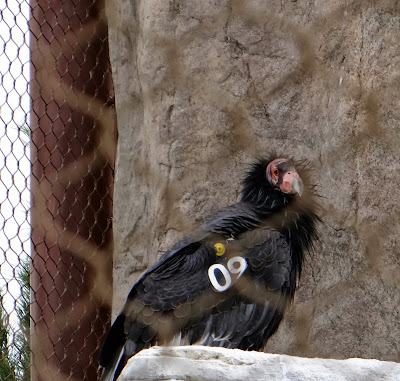 Here's a closeup of that handsome dude 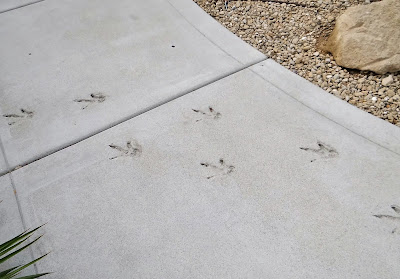 The California Condor "Walk of Fame?" 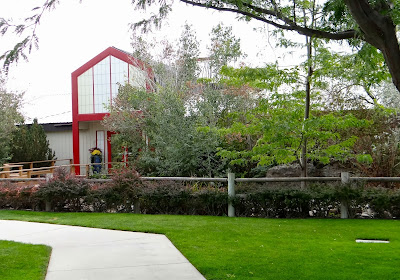 Some of the manicured grounds of the facility.  It's a relatively new and beautifully landscaped and decorated museum, aviary, and interpretive center, manned by a large number of dedicated volunteers 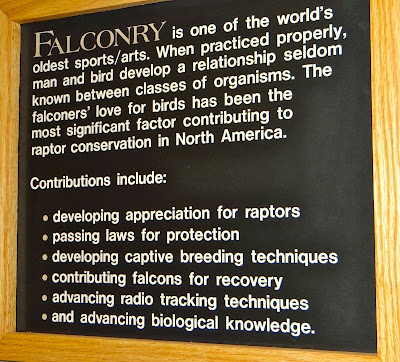 This lady has been a volunteer for 17 years.  This Asian-European owl, similar to the American Horned Owl is 18 months old, full grown, weighing about 5 pounds.  This volunteer has cared for this particular owl and he thinks of her as his "mom-friend."  All during her presentation he made repeated squawking sounds that she explained is his communication for his parents [the volunteer in this case] to locate him to feed.  The baby owls leave the nest but continue to be fed by both parents; this communication ensures that mom/dad can find the chicks.  The chicks can be parent-fed for up to or over a year after hatching. 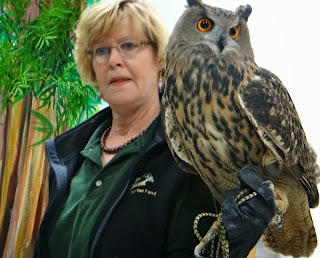 After several hours of touring it was nice to return to Floribunda for a nice pork chop dinner – with lots left over for future meals.

The State of Idaho was admitted to the Union on July 3, 1890, our 43rd State.  Idaho is land-locked, bordered by six states:  Washington, Oregon, Utah, Colorado, Wyoming and Montana and the Canadian Province of British Colombia.  Sixty percent of the state’s land is held by the National Forest Service or the Bureau of Land Management, and it leads the nation in forest service land as a percentage of total area.  There’re lots of opportunities for camping and outdoor recreation!  As of July 2012 the population of the state was 1,595,780; the capital of Boise is its most populous city with approximately 212,000 residents within the city limits and 616,500 in the entire metro area.  The State functions with two times zones:  south and south-central areas are in the Mountain Time Zone (MDT at this time); the northern portion recognizes Pacific Time zone (PDT).  Idaho is known as the “Gem State” because nearly every known kind of gem has been found within its borders.  And, it’s known by many as the “Potato State” owing to its prolific potato crops and diversity of uses for the potato.