Not Every Day Can Be Perfect .... This is a Bad Day

After our first experience as Walmart boon-dockers, we were ready for the trip from Bend to Burns, about 140  miles.  First, here are a few photos taken along the way - a sunshiny day with fluffy white clouds, a changing display every moment - a fine start to a great day.

First of all, Lacy and Lincoln are ready to go ... Eleanor is ready too but doesn't like having to share a seat so she's actually under it!  Here's the proof! 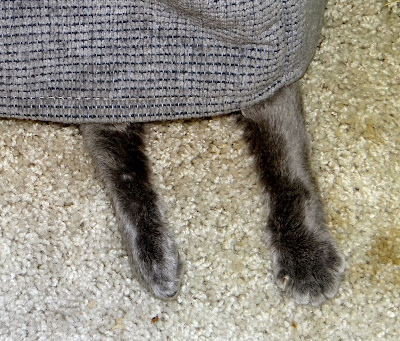 Eleanor had, in her other life, a lot of trauma.  I got her at the cat sanctuary in December 2012 and she's been very very shy and skittish.  She has decided that she loves me (hooray) and sleeps nestled up to my legs at night and visits me as I work on my laptop during the day; but she doesn't fraternize with Lincoln or Lacy other than to allow that they can be on the same bed at the same time.  I really don't think she even knows how to play; the closest she comes to engaging is to roll over on her back when I scratch her tummy.  It's been sad to see what abuse does to a cat; she had lived at the cat sanctuary for over a year and hadn't bonded with anybody.  I feel happy that she 'loves' me and that she's very slowly coming around. 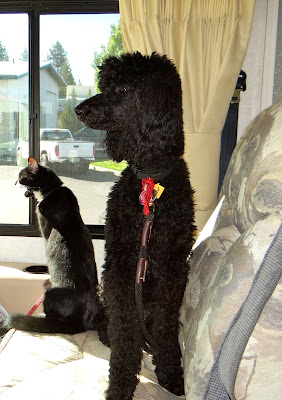 Lincoln, on the other hand, was taken to the cat sanctuary as a tiny kitten and had lots of loving there.  He's a very well-adjusted kitty and thinks he's probably more of a small dog than cat.  He's very interested in goings on outside the RV and loves to be outside when I allow it. 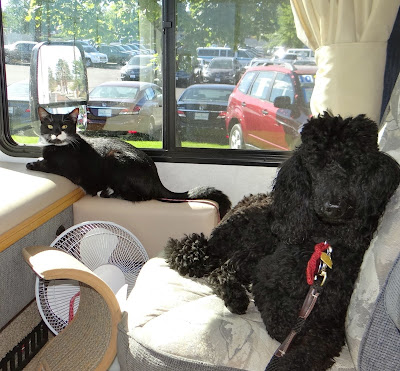 Within 5 or 6 minutes after I start the RV engine, Lincoln is over on my lap and doesn't move from that spot until the engine's off again.  He's one cool cat who loves Lacy, Eleanor and me and thinks the world is a wonderful place.

So we get started about 10:15 and have no problem getting on the right road to Burns (after yesterday's extra driving I want to be sure I've got it right).  I really enjoy this high desert scenery.  There are areas of no trees at all, which is a complete 180 from yesterday, when it appears that Oregon could supply the entire world with building lumber by the looks of the forests.  Highway 20 heads almost directly east of Bend to Burns with only one town along the way.  It's a blimp on the highway called 'Brothers.'  Nothing there! 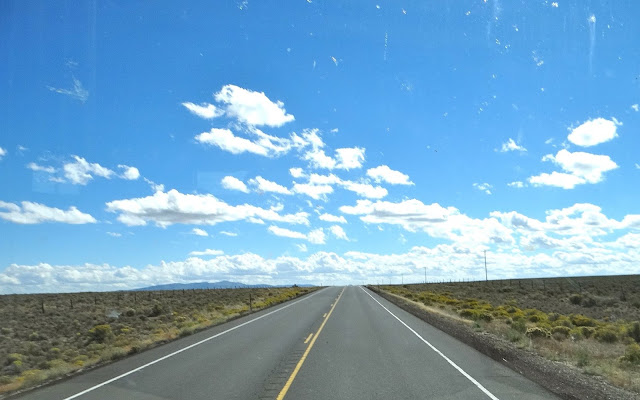 The little white specks in the clear blue of the sky indicate that the windshield needs care.  This is pretty much what it looks like all along Highway 20; albeit, there are a few hills and rock formations from time to time and 2 pleasant rest areas .... 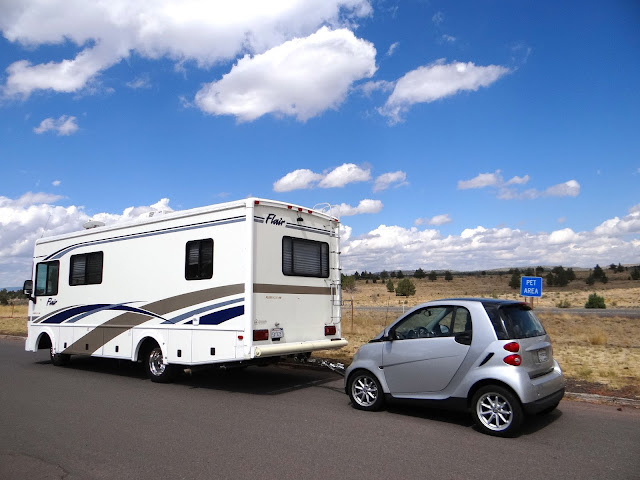 Here we are parked at one fairly close to Burns, but the tail bone was getting tired and Lacy needed a visit to the Pet Area

There was a group from Idaho who were having a picnic at the rest area.  Check out the cars.  What a treat to walk around them and talk a little to the folks who've put so much TLC into these treasures of the past. 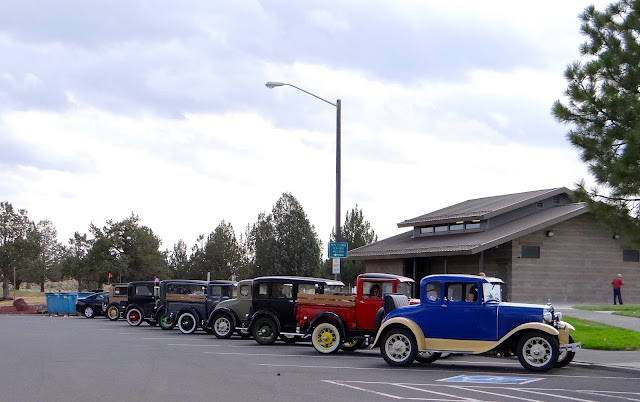 A couple of close-ups.  The car club group is returning to Idaho from an antique car rally 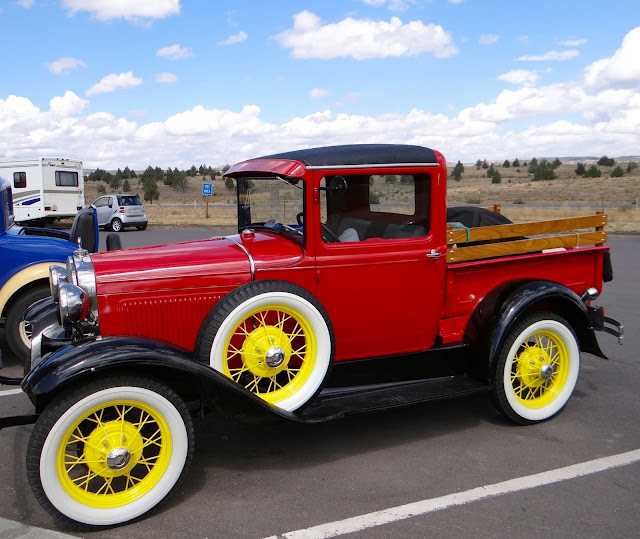 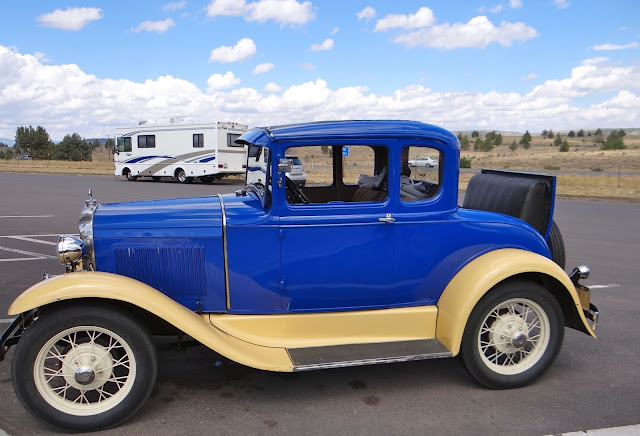 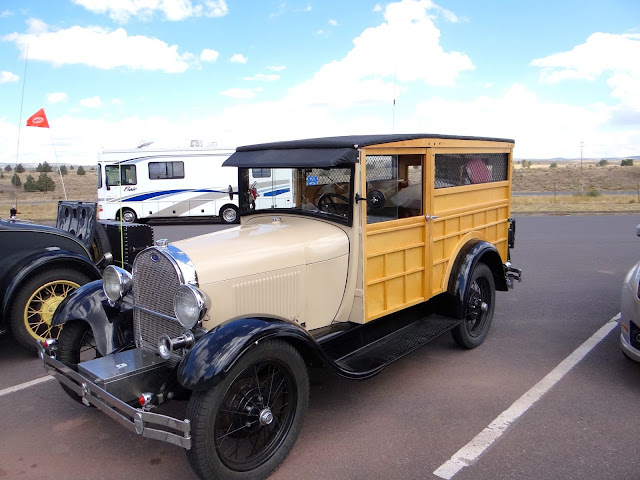 So we arrive in Burns and locate the RV Park.  I've had a little issue with Petunia when I make a 90 degree turn.  As I approached the RV park and started to turn in it happened again.  The wheels seem to lock in the turning position and the steering wheel darts left and right and there's a loud metal on metal clanking sound.  It's happened before a couple of times and the remedy is I pull over , jump out and straighten the Petunia's steering wheel and it ceases.  Well, this time I had to stop while I was still on the street and a guy pulled up behind me and said that the steering wheel needed to be locked.  I hadn't heard anything about that at the place that installed the tow bracket.  This guy volunteered and jumped in Petunia and steered as I turned into the park. It all worked out fine.  I thank him and he's off saying, "Have a great vacation."

After registering at the office I drive to my assigned site, park and unhitch Petunia.  When I try to start her - NOTHING Happens - NADA.  The battery's dead.  That's strange, it ran fine yesterday and I'd disconnected the battery in preparation for towing yesterday and hadn't unhitched her last night.  Well, I call my trusty AAA and a guy is out here in about 20 minutes to jump her.  NADA again.  He has no tools with him and finds that when the mechanism for disconnecting the battery was installed, the terminal doesn't fit tightly on the terminal post (not sure of this vocabulary).  Anyway, he called a service repair shop and towed Petunia into town, where she is as I write.

Stuart, the gentleman at the repair shop, by his own admission,  knows nothing about Smart Cars.  He fixed the obvious problem of the loose connection, but she still won't start; now he thinks there might be something bad in the starter.  He calls Mercedes Benz in Bend; they aren't Smart Car certified, no help there.  So, Petunia stays in his shop tonight and  he'll call Mercedes Benz in El Dorado Hills, CA, where I bought her and hopefully they can shed some light on what's happening.

But, that wouldn't make for a BAD DAY - it'd be just a little negative.   There's more bad news but I'll save it for later 'cause I can't do anything about it now anyway.  The saga continues .....