Where Do We Go From Here?

Yes, Petunia came 'home' Monday late afternoon.  Without going over the whole debacle again .....
She was 'fixed' on Friday but I just wasn't coming up with answers of how I wanted to progress with the whole situation, so I told MB of Portland, her 'hospital,' that I wasn't feeling well and wanted to wait until Monday to retrieve her.

Looking for answers ...
I emailed my friend, Tamra, a recently retired criminal attorney, who is in Spain right now, to tell her my sad story.  Her opinion, and she prefaced it by saying she's not that up to date on contract law, was that the Lemon Law for used vehicles in California is considerably "pro- consumer" and that I might want to take up my issues with the dealership from which I bought the car, rather than MB here in Portland.  I put that in my bonnet to think about, along with several opinions and suggestions, not only from my blog followers, but also from the Smart Car Forum I joined online.  And, I really meditated regarding what my wants and needs are.  (The past couple of weeks have not been as relaxed and happy as I would have wanted; but, I did come to realize just how enjoyable my life had been in recent, months, when my stomach tied into a knot that's lasted for days and days felt like such a foreign emotion!  It's slowly dissipating - somewhat.)

So,  I decided to recover Petunia and pay the tab, which I did late Monday afternoon.  That's one whole lot of dollar bills!  Also, I've come to the conclusion that I want to stay put in Clackamette City RV Park for several days for two reasons. First,  to enjoy my unexpected visit to the Portland area; I haven't done the tourist thing here in about 40 years!  And, two, to use this time to really give Petunia a thorough 'check out' as far as driving and towing go BEFORE I head back out onto my open-road adventure.

Camp hosts support my plan .....
I talked with the camp hosts here at the park and told them I'd like to hitch Petunia up to Floribunda and simply drive around the park, making left and right turns, using the bungee cord 'trick' on the steering wheel that's been suggested by several forum members.  Then I'll tow her outside the park, but not too far afield until I've proven to myself that all's well.  They agreed with my plan for testing the towing in a 'safe' neighborhood.

I did write a letter and emailed it to MB of El Dorado Hills to the new Internet Sales Manager, since my salesman is no longer working for them .... Hmmm, wonder what that's all about.  Anyway, I've heard nothing back from them, as I kind of expected!  I at least know I've made them aware of the whole fiasco - it's in writing - if / when I use the information for legal reasons.  I'm also going to email a similar letter to Allied Trailer Supplies in Sacramento - just for good measure.

The bottom line remains that I want to continue this adventure and I want a tow vehicle to be part of it.

Here's Petunia, snuggled back up to her big sister, Floribunda, early this morning ..... 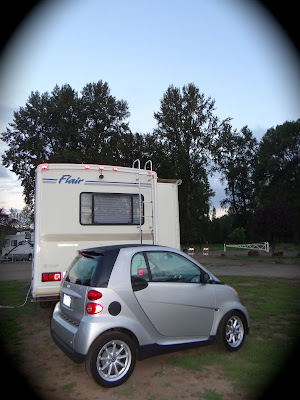 On to other topics ....
Yesterday morning, very early, I received a text from CC, the wonderful friend we met during our stay in Ashland a few weeks ago.  The text read, "Are you, by any chance, in the Portland area?  I'm using a dump station at Clackamette Park and see a  Flair with a Smart car next to it."  Wow, what a coincidence!  CC's in this area, her home stomping grounds, to do a little business and maintenance on her RV before heading out to the great beyond again.  You may remember that I'd gone to a portion of the seminar she was giving in Ashland and she gave me the book she's written.  We'd really hit it off well in Ashland and it was great getting back together yesterday.  We visited for a couple of hours; then she left saying she was going to finish her chores here and head to Eugene.  Well, last evening she pulled back into the park, saying she'd decided to wait until this morning to make the two-hour trip to Eugene.  So we got to visit again for an hour or so and Lacy and Tucker, her miniature Australian Shepherd, had some really fun romping time.  What a nice surprise!  This is exactly the kind of experience I so like and look forward to in this RV life.

This morning I'm going to make a plan for how I want to pass a few more days in the Portland area.  Any suggestions for activities would be appreciated from those of you Oregon experts.  When I do leave I, so far, don't have a set plan for where I'm going.  I kind of think I might either head out to the Coast and turn south along the Pacific edge of Oregon.  Or, I might head straight south to Eugene and from there, either return to California or go east, again, deciding along the way whether I can even get through to Colorado Springs to visit Addison, my school-teacher granddaughter.

If I decide to go back to California I think I might even drive to Santa Cruz to visit my brother and a couple of friends who live there.  Jim has had some health challenges in the last year, but seems to be on the mend; I'd really like to see him.  He and I came into the lives of our parents rather late in their lives, he a year and a half after me.  Dad was career military so Jim and I didn't have the advantage of living around our relatives as we grew up; they all live(d) on the East Coast and Dad retired in California.  Jim has lived in Santa Cruz, by choice, almost his entire adult life while my family galavanted all over the US for years and years.  We lost our folks in the 70s and now have only one another left in our immediate family.  While we were both working and involved with our own groups and families we didn't have much in common.  Now we're both retired and I feel the pull to spend valuable time with him and his lady, Bonnie.

Autumn in Santa Cruz is probably the very best time of year to visit.  Our California coastal areas are most temperate and beautiful in Spring and Fall with the California 'air conditioning' of fog not playing such a big role in each day!  [Yesterday I met an Oregon gentleman here in the park who told me that he and his wife have been full-timing it for a year and a half and still haven't left Oregon!]

California has just about every different climate and scenery and culture possible in one State.  I could spend years just getting to know my own State better.  But, I want to get on to the 47, 48 or 49 others too! So many choices.  I do know for sure that I want to be in at least temperate Winter climes, not dealing with cold, snow, etc. and that leaves out a lot of places that'll have to be visited in Spring and Summer.

So, what are the kids doing while Mom figures out how to proceed?

Eleanor does some heavy-duty relaxing! 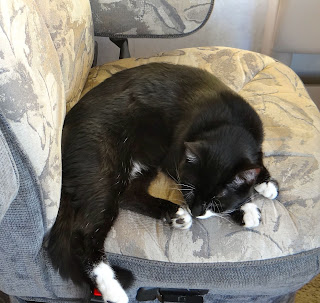 Lincoln takes lots of snoozes between walks on the leash 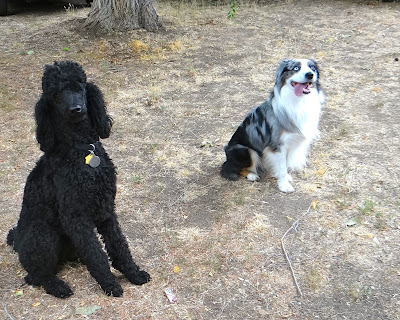 And Lacy gets to play with her 'old' friend, Tucker, CC's dog she played with in Ashland