Who's Daughter is an Ironman?

Yup, Kari is all ready for her latest Ironman competition.  It's tomorrow at Lake Tahoe, California and Nevada.

Now I have to give some background information about this extraordinary woman who, I'm happy to say, is my daughter.  Almost 14 years ago, on November 23, 1999, Kari delivered triplets: a boy, Spencer, and two girls, Tate and Avery.  And they were her 4th, 5th and 6th children!

As she walked in a fog of early triplet care - it was horrendous - she found that at their community center it was possible for her to go for a short swim while the triplets were cared for in the child-care center.  She hadn't been active in sports but did like to swim; she started with about 10 or 15 minutes.  Lo and behold, she found that NOBODY could talk to her while she was swimming - aaahhh - peacefulness.  She gradually went from a few minutes to 20, then to 30 .....  She loved it.

Later, my son-in-law, David, bought her a bicycle for Christmas; he thought it would be one more activity she could be involved in - alone.  With six children, three of them infants, alone time was pretty  non-existent.  Life was one constant round of diapers, laundry, crying, nursing, cooking, driving, pumping [nursing mothers know what that is] .......  And then there were the older three girls, all of whom had very active and busy lives.  It was one hectic home and life.

Well, not only did Kari find that she loved the bike as much as the pool, but she was a natural on the bike.  And thus began the making of a triathlete - from housewife and mother to Super Woman.
She's run innumerable marathons, some she considers just a training run.  She swims like a fish - and fast too.  She's even been accompanied by a therapist when learning to swim long distances in open water, which is a very different phenomena  than  swimming in a pool with the black line on the bottom.  I'm not sure that she'll ever completely be cured of her fear in open water; but she has a mantra - she counts her strokes.  As she came out of the water after her first Ironman swim, I remember asking her [as she ran by us],  "How was it?"  Her response was, "7,456 strokes!"  I don't remember the exact number - but she'd overcome her fear by counting strokes.  On a bike she's incredible.  The woman just has the stamina of I don't know what!  Last year she competed in the Markleyville Death Ride - a bicycle competition in the Sierra Nevada:  129-mile bike ride with 16,000 feet of climbing!  She flew up and down those mountain passes, finishing in less than her predicted time.  And, she seems to do these things without ever having a down experience.

I'm sorry to miss her endeavor tomorrow, as will Addison (21) and Holland (19) as they're not in the vicinity either.  But, we'll all be following online and a whole cadre of family and friends will be at the event to cheer her on.  I'm going to post a few photos of her first Ironman competition in Louisville, Kentucky in 2009 ..... 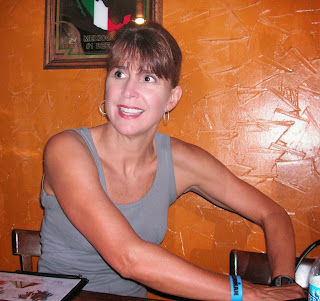 Here's Kari the day before the Ironman in Louisville, Kentucky 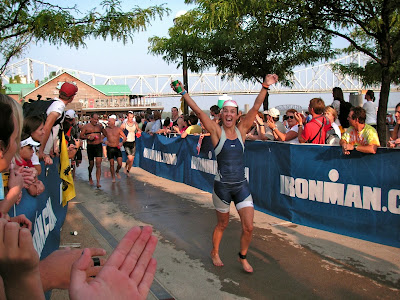 Exiting the Ohio River after her 2.4-mile swim.  Her biggest obstacle (fear of open water) had been overcome and she felt like the rest of the day would be "a piece of cake!" 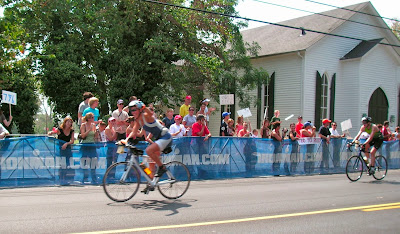 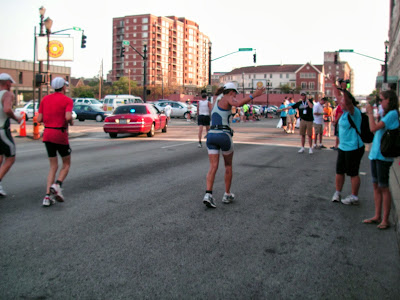 Late afternoon - heading out for the second half of the 26.2-mile run - a marathon 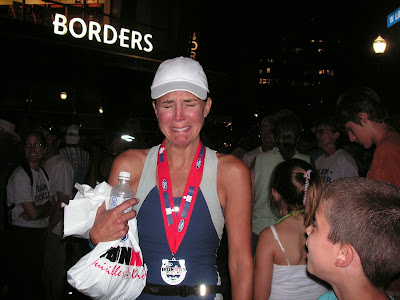 Tears of happiness, "I did it!"  Almost 15 hours - but what an accomplishment.
That's Spencer congratulating his mom, the Ironman 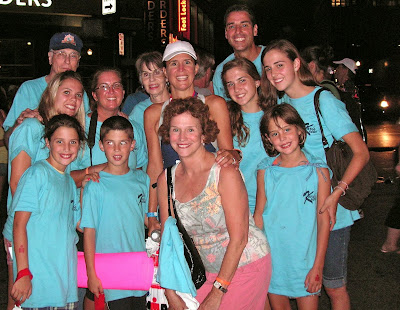 "Kari's Krew"  I don't know why I'd taken my shirt off!  Included here:  David's parents, Sam and Betsy, Kari's girlfriend (with glasses), six kids (Quinn, Addison, Holland, Spencer, Avery and Tate), husband, David, and Mimi.  Boy, were we proud of her 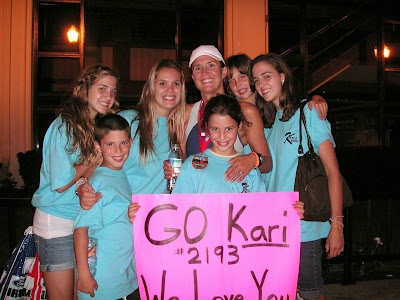 Just a mom and her kids 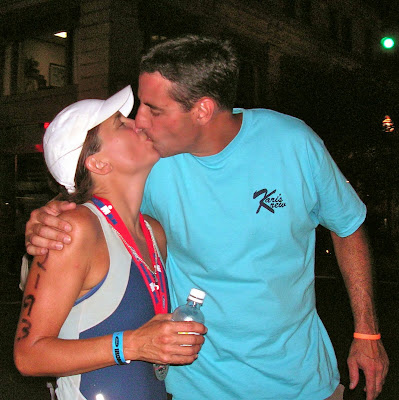 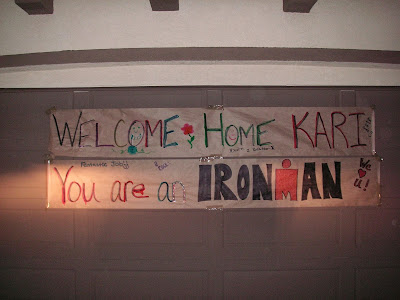 Welcome Home by her friends in El Dorado Hills, California 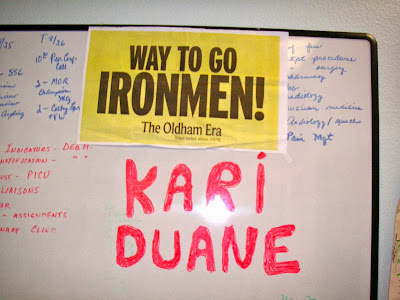 And, finally, my office white board the following week - check out the appropriate seeming notes - 'pain mgt'

This was in 2009.  Now, in 2013, Kari's an athlete, owns a triathlon club ("EPIC Tri") and coaches athletes of all ages and abilities from all over the USA.  Besides her jobs as wife and mother and coaching and competing, she's looking for young athletes to train for future Olympic competition - She's a certified Olympic Triathlon Coach.

I'll have news tomorrow about her latest endeavor....