My granddaughter, Quinn, and her guy, Landon, are coming to visit today and take advantage of the offer to inherit some of "Mimi's Marvels."  I have STUFF I've hauled around from houses to apartments to storage units to houses that I've always thought they might like when they grow up.  Well, Quinn's climbing the corporate ladder in her first job post university graduation three years ago.  She's recently moved from a one-bedroom apartment to a two and probably has some empty spaces and cupboards just waiting to be populated with some of Mimi's STUFF.

This is Landon, taken Christmas morning 2012 - opening gifts at about 6AM! 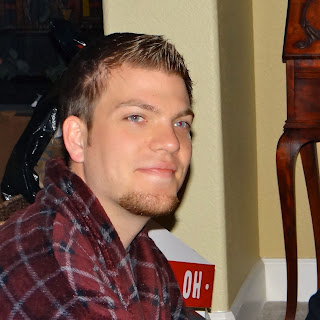 And, this is Quinn when she discovered she'd received an iPad for Christmas. 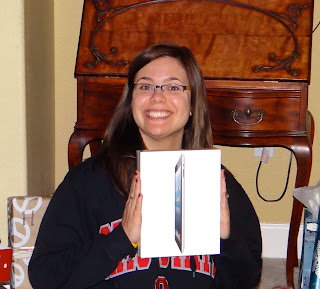 I've been setting things aside to offer her as I shuffle through and weed out my belongings for the great downsizing!  Some will go to the likes of Quinn, some will go into storage, some will go to Goodwill and some will go in Miss Flair.  The sorting and decision making is a little tough after all these years, but as soon as the decision is made and the item placed in the correct pile, I feel freer and freer!

Believe it or not, the most difficult decisions, for me, have to do with books, in general, and cookbooks especially.  I've collected cookbooks for &%*#@^! years and have, in the past 4 or 5 years, given up almost half of them - that's down to about 400 from about 750!  Now, I'm in process of getting that number down to about 100 - I'll never have a coffee table big enough for all those beautiful books (nor do I want one!).

I'm also stressing over all my extraneous knitting / crocheting yarns and equipment.  My knitting friend, Kerry, has a goal this year to use her entire "stash" of yarn.  Even if I were to have that goal I think it'd take about 20 years to get down to the bottom of my stash!!!  But, I'm working on reducing it to a manageable level. 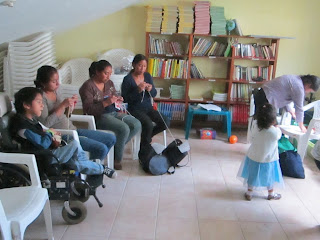 During my wonderful time in Guatemala I began and continued teaching knitting and crocheting to about 15 ladies who started as rank beginners and advanced to the point where they can sell their wares.  I taught at a school run by a foundation out of Bismarck, North Dakota, Nuestros Ahijados, The God Child Project.  Later, I invited a smaller group, who were particularly interested, to come to my home one extra knitting day a week for more advanced lessons.  In the photo above, this 7 year old "special" boy accompanied his mom, sitting next to him, every week to class.  Since the buildings in Guatemala very rarely have any accommodation for wheelchairs, Mom's cousin, next to her, carried the wheelchair up the stairway to the third floor classroom and Mom carried her son on her back!  I fell in love with these ladies and their families.  Hence, part of the name of my blog .... "heart songs" ...... they make my heart sing! 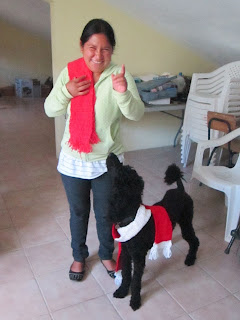 Lacy was happy to help the ladies out by modeling their creations.  This lady, when this photo was taken, had only had two classes in crochet; but showed up this Tuesday morning with two scarves she'd crocheted at home between classes.  Such dedication.
The students spoke not word one of English; so, I had to learn a whole new vocabulary.  It's one thing to speak Spanish, but another to speak 'knitting and crocheting' Spanish.  Believe it or not, these are not terrifically well-known crafts in Guatemala.  However, weaving and embroidery are and it's amazing how dextrous everybody is.  I also taught boys and girls as young as 5; they're eager to learn and have incredible skills when given the opportunity. 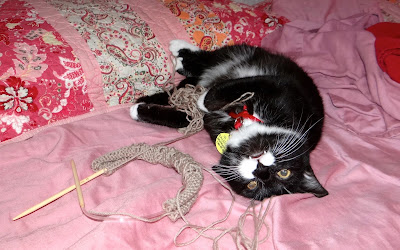 And, here's Lincoln, my knitting helper, on the road in Mexico this year.  Several times, when I'd neglected to stow my yarn before turning in the night before, I was greeted with an interesting RV decor scheme! 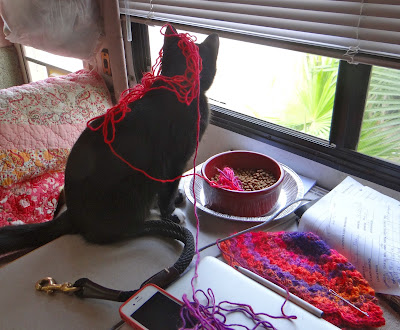