Monday Morning - Off to the Mechanic We Go

Just dropped off Miss Floribunda(?) at Future Fleet in Roseville.  The gentleman I bought her from had put together a nice spreadsheet of what had been done and at what mileage on the odometer.  And, he also listed what needed to be looked at and estimates of cost.  So, I made an appointment for this morning at 7; and, actually got there at about 7:10.  We went over my list and they'll do a complete inspection and let me know what needs to be done NOW, SOON, LATER, MAYBE, NOT NECESSARY (if there is such a category).

I posted several questions on my Fleetwood Group website and received lots of information and advice from other members; so I feel a little more comfortable than if I were trying to do the whole decision making on my own.  They drove me back to Bob and Judy's so now I just wait to hear what the estimates are before I make any concrete decisions.  I feel a little more selective as I'll be traveling in the US and Canada for the foreseeable future; it's not like driving through Mexico where I didn't always feel I could find good mechanical service.

I've packed a backpack with one set of fresh clothes so the Lacy, the kitties and I are 'camping out' in Bob and Judy's house for at least until tomorrow - and maybe 'til Wednesday.  I'm still waiting for estimates for the Smart Car tow bar.  Hopefully I can get that taken care of this week too.

Let's see; I'll dig around for potentially interesting photos to add to this blog ....

These photos were taken outside of Cusco, Peru in 2010.  I spent almost a month in Peru on a textile tour.  Cynthia Le Count Samake of Behind the Scenes Adventures takes small groups (6 in this group) to wonderfully interesting places to learn more about the history and traditions of textiles.  I've gone to India, Peru and Oaxaca, Mexico with her and have thoroughly enjoyed each adventure.

Cynthia knew this community of indigenous knitters - the men do most of the knitting - and contacted them to meet us to show us their wares.  We arrived at the designated location and watched them hike down the mountainside to meet us.  A few of us speak Spanish, but no go here; these gentlemen speak only a Ketchuan language called Kitchwa (Quechua in Spanish).  Fortunately Cynthia has a wonderful friend in Cusco who speaks several of the 'dialects' of the language group.  She accompanied us and we passed about two hours with the men, learning lots about their knitting and culture. 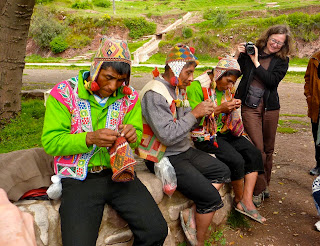 Most of these villages and communities of indigenous people barter for goods and services - they do not use money.  There are no written patterns for these intricate designs.  Children start learning how to spin with a hand spindle at about 4-5 years of age.  They also learn carding, dying and weaving with a back-strap loom before they're much more than 6-7.  They begin learning how to knit and crochet by sitting alongside an older sibling or parent, watching and mimicking the stitches, patterns and projects.
As you see in the photos, they carry the yarn in a pouch that's located on their side; the yarn is pulled from the ball and goes around their neck and then down to the piece they're knitting.  The knitting needles are made by hand, using wire with one end hooked to form a quasi crochet hook.  For those of you familiar with knitting needle sizes, a size 2 needle is average for knitting a pair of socks; these needles are somewhere in the neighborhood of 00-000 size!  They're knitting about 15-18 stitches per inch!  That's FINE. 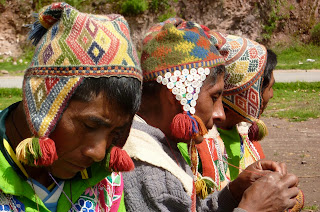 A close up of the concentration of these artisans.  All three of these men were married and fathers of several children.  The buttons used for adornment on their hats, vests and clothing came to them by way of the Spanish Conquest; over the centuries buttons have been, at times, used for currency. 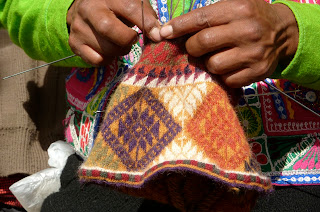 Each artisan develops his/her own pattern designs and rarely do they make exactly the same pattern twice.  We spent about three weeks in this area and visited many villages.  In some places we actually each chose one artisan to stay with throughout a day of work.  I spent several hours with a young woman, her 8 month old baby and her younger sister, whom she was teaching to knit.  The women wear very flared skirts; so when they seat themselves on the ground, the skirt becomes a kind of play area for the baby.  Every hour or so, she'd put down her knitting to 'change' the baby - no diaper - she changed the hand knit pantaloons for a dry pair!  Her younger sister, about 10, sat at her side and was working on her own project.  From time to time she'd ask a question or Big Sis would advise her to tear out or make other alterations to her project.  There was nary an untoward sounding order or reply.

In one village where our Cynthia has spent a lot of time, the 'mayor' (called "el presidente") and his wife had named one of their daughters after her.  When we arrived, our Cynthia was anxious to see how much her namesake had grown since last she'd seen her.  When asked, the mayor explained that it was his 6-year old daughter's turn to watch the community herd of llamas and alpacas; so, he took out his trusty conch shell and 'called' her.  Way up the mountainside we could see a little tee-pee type structure; at the sound of the horn out of it popped his little daughter, Cynthia. [She was inside because it was raining - quite hard].  She waved and he signaled her to come down, which she did, to see her Tia Cynthia.  How adorable and how excited she was to see our Cynthia - all six years of her.  Children learn and participate in the responsibilities of the extended family from a very early age - a good reminder of how cushy our kids have it!