Happy Day After the 4th!

I never did get around to posting yesterday.  It was a July 4th to remember ..... the festivities were mild but the thermometer was almost out of this world!

I started the day prepping for the barbecue dinner I offered to prepare at ranch of my friends, Bob and Judy.  I wanted to get as much done as possible, in terms of using the stove and oven, because this heatwave that's hit us on the west coast had been reported to be leaving on Tuesday - NOT!  Yesterday turned out to be the hottest of the whole spell; I'll get to that later.

After spending most of the early morning in my kitchen I met the other 'girls' at Becky and Ken's house.  We had drinks, chips and snacks by the pool  - the pool was a godsend even though the water was 90 degrees because of the heat.  We four ladies set ourselves up IN the pool with an umbrella for a little shade and talked nonstop for about 4 hours!  I know men often wonder what women can talk about for 4 hours - just about anything!

Then we drove from Becky and Ken's house in Carmichael (suburb of Sacramento) to Judy (Becky's sister) and Bob's ranch in Loomis for a real American Fourth of July barbecue.  Loomis, because of its rural Sierra foothills setting, doesn't allow fireworks of any kind due to the fire hazard.  That suits me just fine, as Lacy is petrified at the sound of fireworks; she actually becomes almost catatonic!

This group:  Judy and Bob, Becky and Ken, Jackie and I are great friends and get together fairly regularly for dinners, game nights, etc.  I've been the odd man out due to all the traveling I've been doing; I'm so glad we had this opportunity to get together before I haul out of here in a few weeks. 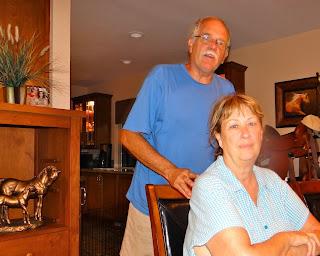 Here are my dear friends, Bob and Judy, who have a beautiful ranch in Loomis with 2 magnificent horses, 5 llamas, 2 bunnies and 4 Chihuahuas.  Unfortunately none of us took the best photos - we've all been suffering with the heat!  Bob and Judy were married during the time I was in Guatemala.  Now they're old married folks after having celebrated their first anniversary in May. 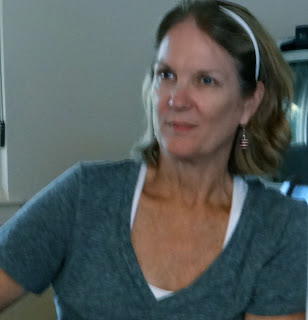 This is lovely Becky, Judy's younger sister, who I've become very friendly with since being introduced by Judy a few years ago.  Becky and Ken have been wonderful assets to my life.  Unfortunately, as the youngest one in the group, Becky is still slaving away in her career - Ken retired earlier this year. 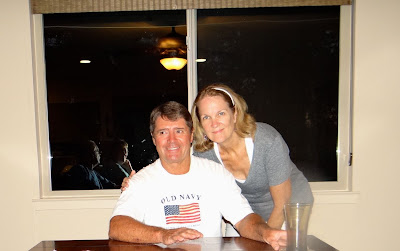 Here're Becky and Ken together - Ken in his patriotic shirt.  He's been tearing up all the golf courses in the Sacramento area - his new favorite thing! 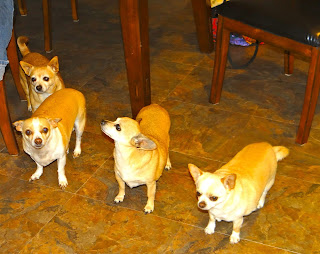 These are Judy's 4 Chihuahuas - Marty, Max, Lily and Dusty - not necessarily in that order! 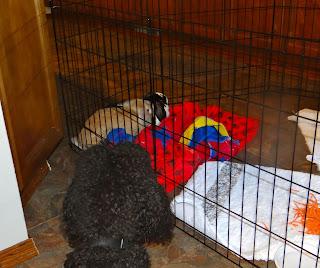 And, here is where Lacy spent the entire visit.  Bob and Judy have been having to bring their two pet bunnies, Sable and Oreo, into the house each day between about 9AM and 9PM, in order that they, too, might live through the heatwave.  Lacy is enthralled; she doesn't try to get to them, bark or hurt them in any way; she's just totally fascinated.

So, a final note ....  we're pretty tough people when it comes to heat.  We are quite accustomed >90-95 degrees almost every day from May well into October.  When I say heat, we're talking days and days of over 105 - and not much  cooling down at night.  Yesterday, the mercury soared to 115!  When I left Bob and Judy's at about 9:30 to drive the 14 miles to my house it was 108 on my dashboard thermometer - in the dark!  When I arrived home, my thermometer outside on the patio table read 110.

This morning I awakened at 6:30 and checked outside - the thermometer read 74!!!!!  Now it's about 83 and that's cool for us!  Hopefully I won't need a sweater to run to the store!