The Hardest Part of this "PRE-ADVENTURE" is Done!

I'm sitting in my air-conditioned living room resting my tired feet on one of the two sofas I'm leaving for the renters to use.  Other than a few things I'm leaving for their use, the house is bereft of furniture; but it sure has a lot of dust motes!  It looks like it hasn't been vacuumed in two years, but I just did a BIG cleaning about two weeks ago!  Oh well, it'll be a heck of a lot easier to clean an empty house!

Jeff, son, David, son-in-law, and Max, Holland's boyfriend, really helped me immensely with the moving of all the furniture and lots of boxes today to my climate-controlled storage unit - light items, heavy, really heavy, fragile, really fragile, so fragile: "don't put anything on top of this box," etc.  There's still enough space in the storage unit to stow the several more boxes of STUFF I need to clean out of the house, you know, the odds and ends that turn out to take up about ten more boxes; but my tolerance for packing, lifting, moving, arranging, etc. is at a new all-time low; so I think lots of what's left is going to be headed to Goodwill Industries!

After loading the 17-foot U-Haul to the gunnels and moving the contents to the storage facility; when we got back home, David and Jeff just about completely filled it again with furniture, art work / paintings, etc. that David drove to their house in El Dorado Hills.  Jeff and Alice loaded up their car with lots of STUFF and Alice will be back down this coming week to commandeer more.  Ostensibly, my relatives are 'borrowing' various and sundry stuff - Hmmm - I'm not sure I'll ever see this stuff in a house of mine again!  David will come tomorrow morning, with the U-Haul, so we can return it by 11:45.

One thing I hadn't mentioned in an earlier post was that this morning at 7:30, Kari's triplets (Spencer, Tate and Avery - age 13) and Jeff's twins (Malia and Samantha - age 13 too!) competed in their first ever triathlon.  So, that's how we started the moving day.  It was held at Rancho Seco.  Yup, that's the old nuclear power plant about 35 miles south-east of Sacramento ..... "The plant operated from April 1975 to June 1989 but had a lifetime capacity average of only 39%; it was closed by public vote on 7 June 1989 (despite the fact that its operating license did not expire until 11 October 2008) after multiple referendums." [wikipedia].

It's now the really beautiful Rancho Seco Recreational Area with a lovely lake and a very nice RV park I might get to one day .....  Here's a slide show if you're interested ...

I left my house at 6AM and would have been at Rancho Seco by 6:45, but my iPhone GPS took me on a merry goose-chase through Rancho Marietta (about 15 miles out of the way - and back) before heading to Rancho Seco!  So, the gun went off for the swim as I was walking to the start - no photos of the start!

All five of our crew did very well - as I've mentioned before, both my daughter, Kari, and my son, Jeff, are Ironmen several times over.  Kari owns a triathlon club, EPIC TRI, and trains some really incredible athletes; it looks like the next generation of super athletes is in the making ..... 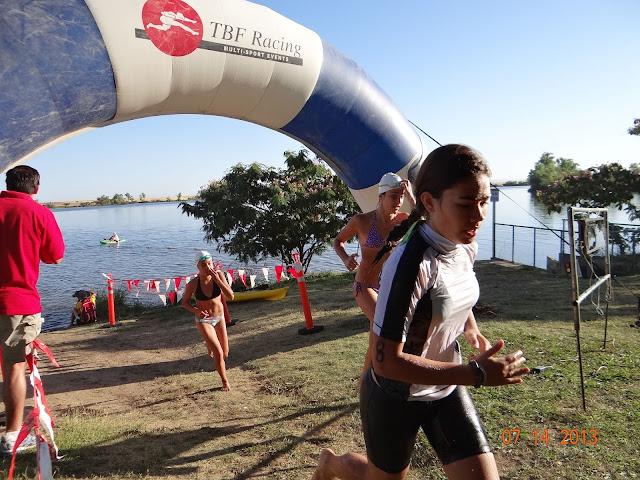 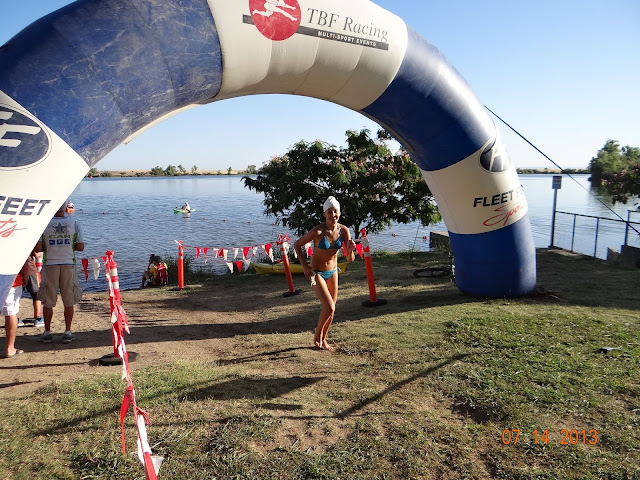 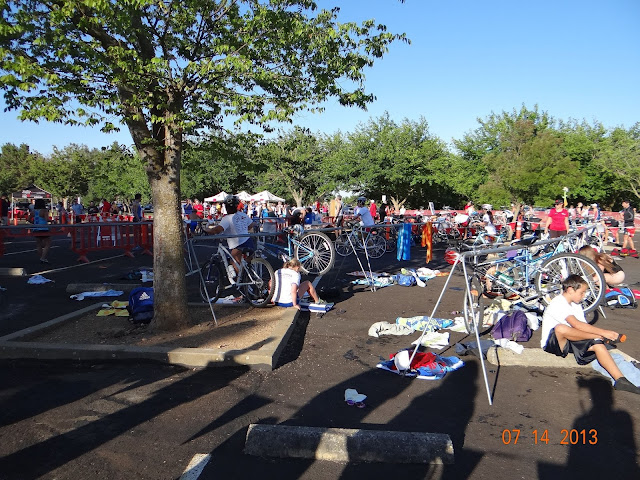 Change area - goggles off, bike shoes and helmets on and off they went for the five mile bike ride 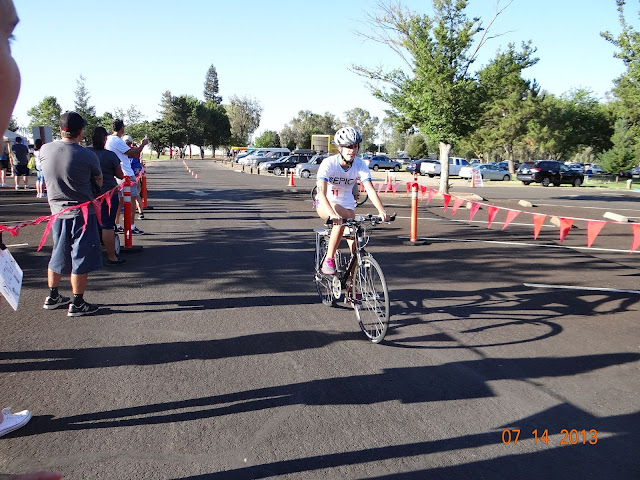 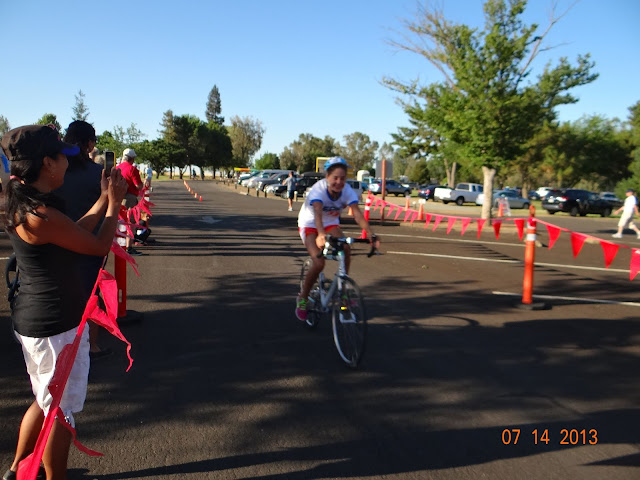 Tate is always happy and smiling - coming into the finish of the bike ride.
Alice (Malia and Samantha's mom) is on the left taking photos


Finishing up with a one mile run... 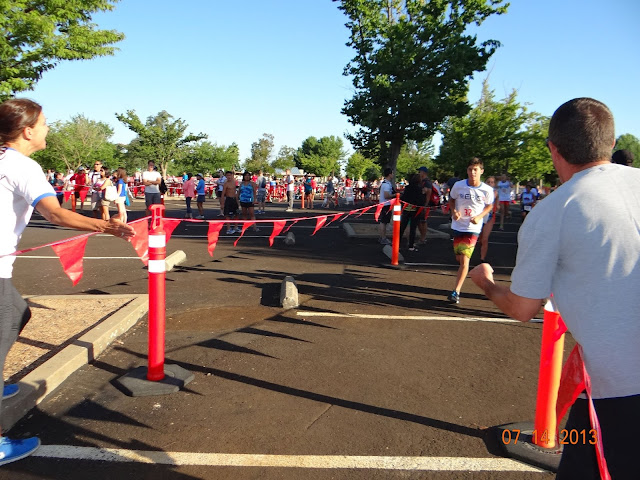 This is Spencer - our only boy - coming up to the finish line at the end of the event.  Great job, Spence.  Kari's cheering on the left and Jeff on the right. 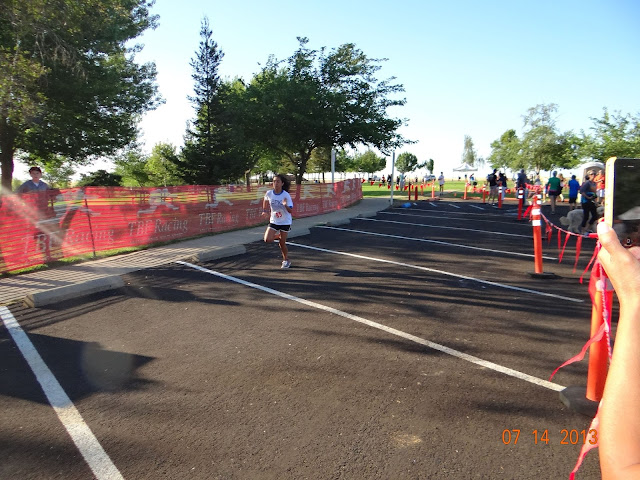 This is Samantha who runs like the wind - and is so competitive - she can outrun just about
anyone anywhere near her age - at almost any distance! 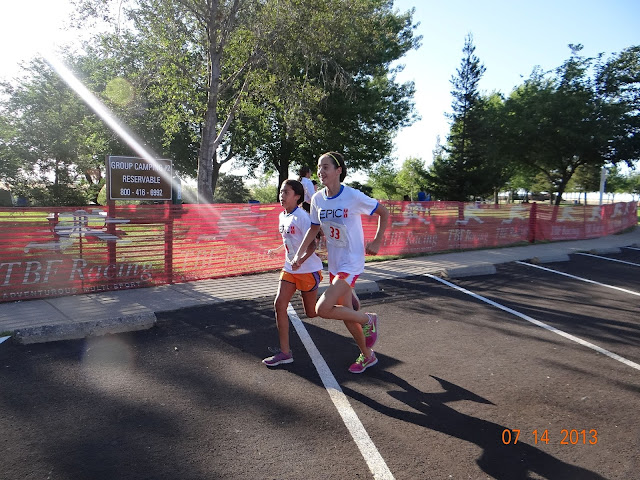 Cousins and BEST FRIENDS, Malia and Tate, finish holding hands so one wouldn't beat the other.

Unfortunately, I left my camera bag with back up battery in the car - this battery must be faulty because I 'd charged it last night but it only lasted through about 20 photos.  Then, like the technologically challenged person I am, I remembered at the very end of the awards ceremony that I could be using my iPhone!!!  DAH! 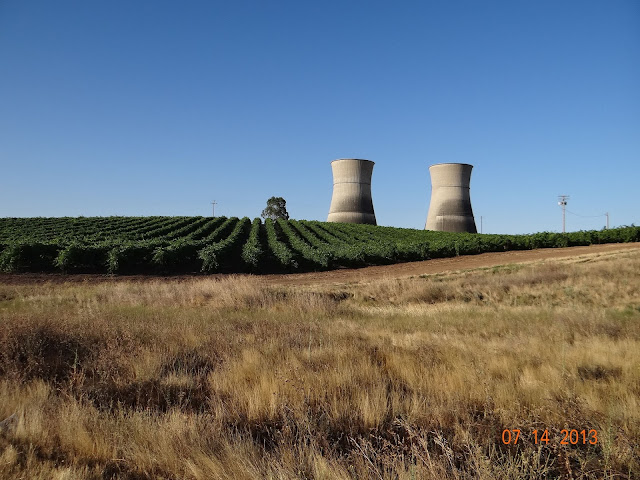 This is what the Rancho Seco Nuclear Reactors look like today - in the middle of a vineyard!

Last but not least, a couple of photos taken at an earlier age 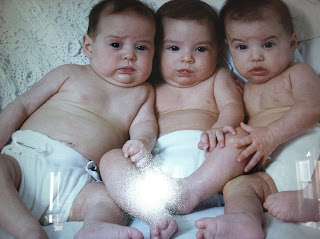 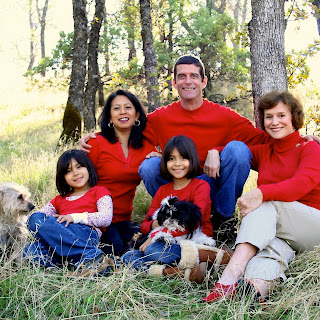 L-R:  Abby, Malia, Alice, Jeff, Mimi - Samantha sitting in front of her dad holding Bella.
This photo was taken the week before Christmas in Cottonwood, CA