Another down-sizing and packing Saturday.  Today I spent more time stowing things in my RV.  I think I'll 'move in' tomorrow after the crew - my son, jeff,  son-in-law, David and granddaughter's boyfriend, Landon - moves my furniture and heavy boxes to my storage unit.  I met with the renters this afternoon to go over the Rental Agreement in detail; we're all set.  After tomorrow's hardest part of the move is finished, I'll have about 12 days to continue with the down-sizing, stowing, storing, giving away, etc; and, I'll give the house a good cleaning so Jennifer, Jason, Joshua and Justin can move into their 'new home.'

I haven't mentioned, I don't think, but I've really enjoyed being home for this couple of months; I've finally been meeting my neighbors.  When I originally moved in I was still very much participating in the working world and, although my commute was short, my hours were long.  So I didn't really get to know any of my neighbors other than to say 'hi' and 'how are you?'  Since I've been home from my Mexican adventure, I've thoroughly enjoyed meeting and greeting some of the nicest people - my neighbors.  Of course, having Miss Flair sitting in front of the house is cause for friendly banter, as is walking Lacy; and oh how she loves visiting with everybody on the street.

A couple of the neighbors have asked if I'd give them info about my blog so they can follow our adventures, so this afternoon I made up some new calling cards [are they still called that]?  I made about a hundred so I'll have them when asked along my way...... 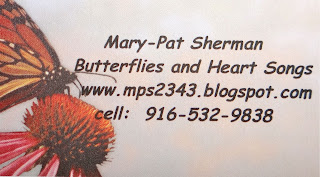 Such interesting things come up since I have the time to chat with people.  I'd noticed a neighbor who lives across the street for some time, even before I left for Mexico.  We never had any conversation other than saying, "What a nice dog!" when we were both out walking our pets.  In the last couple of weeks, Kim and I have started having short little blips of conversation; today I happened to mention this blog and she asked if I'd give her the name so she can follow my adventures.  And, while we were talking she mentioned that she'd written a book that was published in 2009.  Wow, an author!  I said I'd love to read it so she gave me a copy; I know what I'll be doing this evening.  Everybody is interesting. I just have to participate ....

I've also met the new owners of the house next door, Marty and Susan, who bought it as an investment property; they're there often doing lots of yard work, etc.  Then there's Bobbi, the neighbor two doors away,  a widow who moved here a year or so ago from Arizona after her husband passed away; her kids and their families wanted her to be closer.  What a beautiful, and very lovely, lady.

I have to say that some of the friendliness I'm encountering probably has to do with the fact that I'm more 'present.'  I had a little reminder on my desk at work ...... "When I get all tied up in myself, life becomes a very small package."  How true that was - now my life is a much larger package.

Back to the down-size tossing!  Happy week-end! 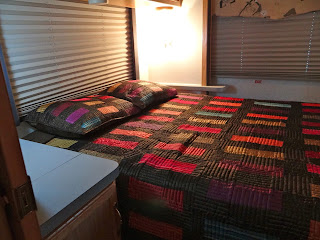 Bed's made - that's all that matters - almost! 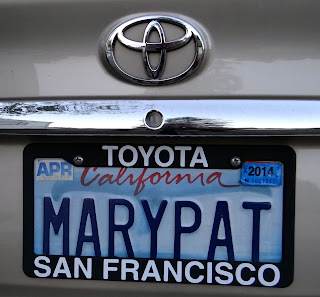 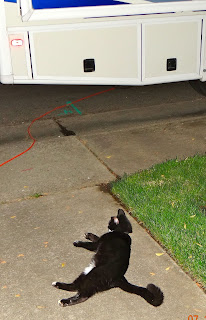 Of course, Eleanor is waiting in the safety of the bedroom in the house.  She'll be transported to the RV and probably won't go outside during the entire adventure.


Moonrise over Roseville
Thanks to Kevin and Ruth for the idea 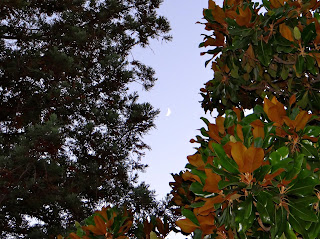 Because the moon is such a tiny speck between the redwood and magnolia trees, I took another just to prove that it's really there.  My moon looks a lot like Kevin and Ruth's in Saskatchewan! 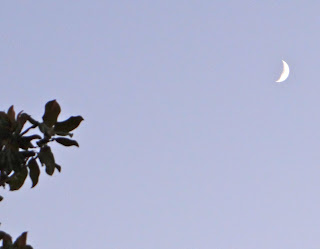