Back to "MY" Pacific Ocean

We arrived here at Dockweiler State Beach RV Park at about 2 this afternoon after a nice 144 mile drive from Indio.  What a nice change in temperature - about 75 F (23.8 C) with a nice breeze blowing in from the ocean.  After having driven all over Kingdom Come in Mexico, I have to admit that I was a little worried about driving in LA - with commute traffic.  Well, I needn't have bothered with the concern; traffic was light and my iPhone GPS took us right straight to the RV park.

This morning, before I left Indio, I went to a locksmith to see if he could either make a key or change the deadbolt lock on the side door of the Dolphin so that I could lock it from outside the RV.  When I purchased the rig, the previous owner said he'd never had a key for the deadbolt.  I've been able to set it from the inside but it was darned inconvenient if I wanted to lock the 'kids' in to leave them - I'd have to lock up from the inside then climb into the cab and go out the driver's door.  Also, for some reason, the door handle lock has not been functioning for the last few weeks.  I stopped at a locksmith right near where I stayed last night and he made a new key for the deadbolt and adjusted the door handle lock and they both function perfectly.  Hooray!

When I got fairly close to this beach area I scouted down a Wall-mart to stock up on a few grocery items so I could relax before the excitement of everybody arriving tomorrow and Friday for the big weekend.  Since we've been here we've walked on the beach and I've taken a few photos of the
sunset ... 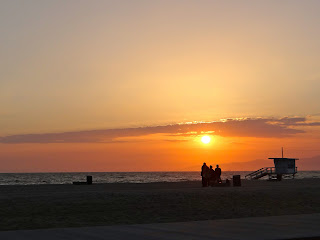 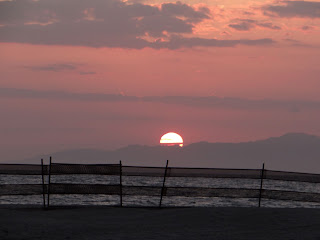 Looks like I'll have a real treat tonight - it's dipping down into the 60s now so it should be really comfortable sleeping tonight.

Oh, I almost forgot to mention that today is the anniversary of my mom's birthday - she was born on May 8, 1908 - that would make her 105 years old!  When I was growing up her birthday occasionally fell on Mother's Day.  I miss her.  She loved me so much.
Posted by mps2343 at 8:21 PM