Wow!  Those LAX take-offs have no effect on us!  We slept in until 9!  I'm looking forward to all the activities of the coming celebration, but also really really love my alone time.  Once again this morning I'll rearrange Daphne Dolphin because Addison and Kari will be delivering boxes of Addison's belongings to drive home to their house in El Dorado Hills.  This little home away from home has had a lot of reincarnations (well, maybe just readjustments) and she does quite well.  It helps that none of my family is really fussy about where they sleep.  I'll be moving back to the couch tonight - and that's okay by all of us.

Several years ago, 2003, I visited the famous Lindt Chocolate company, outside of Geneva, Switzerland with my MBA class from Dominican University.  We were in Switzerland to visit many world famous enterprises, banks and organizations.  Companies like Lindt Chocolate, the World Trade Organization, the International Red Cross, the bank Crédit Suisse, etc.  Upon return home each student was assigned the task of researching and writing a paper regarding one of the businesses we'd visited.  I chose Lindt Chocolate ..... Here's a little history of chocolate - because it relates directly with my time in South and Central America and Mexico:

Chocolate, as we know it, is a processed food that's produced from the seed of the Theobroma cacao tree, a tree that only grows within 17 degrees North and 17 degrees South of the Equator.  [Notice the name, CACAO, not cocoa - more about that later].  There is documentation of its use as far back as 1100 BC.  The majority of the Mesoamerican people (including Aztecs, Maya and Incas) used cacao to make beverages and foods for royalty and religious purposes and many used the beans as a form of currency, used often to pay as a "tribute" to the conquering army of Aztecs, etc.  Unprocessed cacao has an intense bitter flavor - the Aztecs' beverage was called by a Nahuatl word, xocolatl.

When the Spanish Conquistadors invaded South and Central America and Southern Mexico, they returned to Europe with samples of this special food.  The various trusting indigenous peoples offered cacao to the Spaniards as a gift and they, in turn, took the until then unknown bean to their royalty in Spain.  In the highest echelon of society in Spain it became a popular, though not very good tasting drink.  Of course, as word traveled throughout Europe about this exotic new flavor,  many 'recipes' developed that enhanced the flavor for the sophisticated palates of Europeans.  Interestingly, Europeans never really infused cacao / chocolate into their regular diet, but sweetened, fattened and made it into its own food group:  desserts and treats.

Briton John Cadbury developed an emulsification process by which it could be made into a solid.  Other well-known names in the formation of chocolate as we know it:  Godiva (founded by Belgian Joseph Draps), Ghiradelli (founded in 1838 by Italian Domenico Ghiradelli), Hershey's (founded in 1894 by Milton Hershey), the list goes on .... Chocolate is a highly valuable commodity; companies juggle for positions of excellence in its production and distribution to a whole world of chocolate lovers.

Although it was 'discovered' by the Spaniards, with the help of Meso-americans, two thirds of the world's growth of Theobroma cacao is now centered in Western Africa in Cote d'Ivoire [Ivory Coast].  Oh, yes, what about the name CACAO?  Well, the Conquistadors didn't relish the name Cacao as 'caca' in Spanish refers to 'feces.'   Somebody accidentally misspelled the word just around the same time that it was introduced in the Courts of Spain; thus it became COCOA. 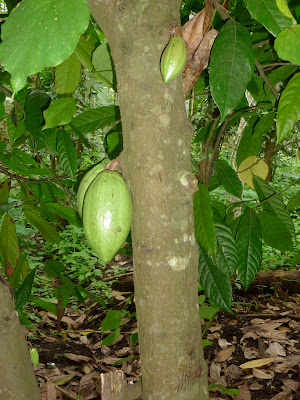 After all the above information, this is a photo I took of unripe Theobroma cacao on a Cacao tree in India in 2009.

A special word to Jorge ....  We have no control over what we FEEL.  Feelings just are.  But, we do have control over what we DO.  So when those negative, closed feelings come to the forefront of our consciousness, if we change how we physically, intellectually and emotionally respond to them, we will change who we are - for the better I think!