Addison finished all her finals today - it's over!  Hopefully no professor will decide that she doesn't deserve to graduate - at this time and especially since she's graduating with honors!

Addy called early this afternoon and said she would pick up her mom (Kari) at LAX and then come and pick me up at the RV park; which they did - and we did some last minute shopping for her post graduation ceremony party given by the parents of the four girls who share Addison's house.  We also went out for an early dinner and Pink Berry yogurt for dessert.  Of course there was lots of girl talk about what we're all wearing to which activity .... I haven't had a conversation like this in months and months.  In Mexico it was try to be clean and wearing clean clothes - that's it!

This evening, just as we were returning here, another beautiful sunset presented itself..... 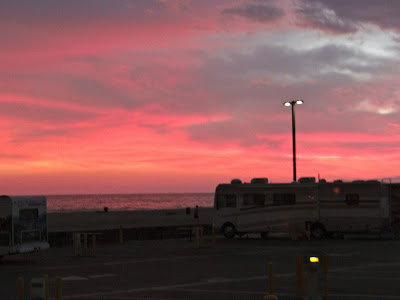