May Day  -  throughout the ages:

Many pagan celebrations were abandoned or Christianized as the Northern Hemisphere became converted in Northern Europe  But a more secular celebration continues to be observed in Europe and America and it's best known for its tradition of dancing the 'maypole' dance and crowning of 'Queen of the May."  And, May Day is Lei Day in Hawaii ..... kind of like a minnie Valentine's Day when young men give a lei their girls.

Beautiful morning in the desert - no wind - just the chirping of birds and the crickets have gone to sleep for the day after rubbing those hind legs together all night!


Here are  a couple more pix of Rock Hound SP - this gigantic cactus is right next to my site.  It looks kind
of like a bear with a bad hair day.  I asked in the visitor's center what it's called and she told me it's the Soaptree Yucca, deriving its name from the soapy material in its roots which made this plant a  popular substitute for soap.  It most often only has one stalk but this, and several around here, have branched out to become quite broad.  Interesting! 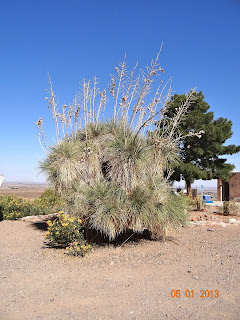 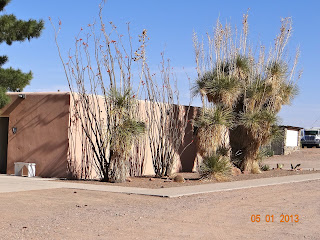 I REALLY NEED A BIRD-WATCHERS' BOOK!  There are so many species and their calls and chirps are so interesting .... I just wish I could figure out what is which!

My new organization has proved to be valuable in terms of getting ready for a travel day.  Most of the interior prep was done while the coffee brewed.  Now I'm relaxing with a cuppa and looking forward to today's adventure.  I'll be heading to Kartchner Caverns State Park in Arizona and I'm sure I'll have lots of beautiful pix - it's supposed to be a magical place. 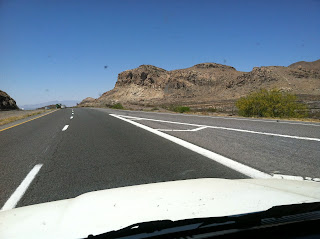 Heading west on I-10 -coming up on Arizona rocks!

We arrived here at about 2:30 after an easy, albeit boring, drive on I-10 - straight, hot, windy, lots of rocks to look at, very few inhabited areas.  Here are a few introductory pix: 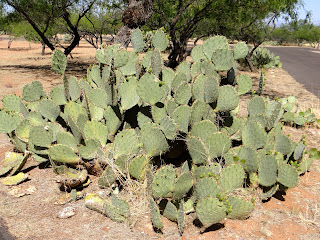 This is a very healthy opuntia cactus, also known as 'nopales' (very common cooked vegetable/fruit in Mexico - the produce department in large stores, like Wal-mart, have an employee who de-needles the nopales and slices it into julienne strips), or paddle cactus.  I think we normally call it 'prickly pear' in our supermarkets 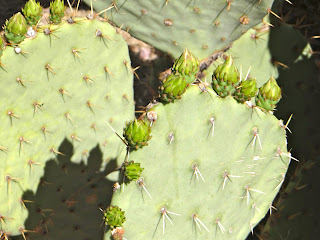 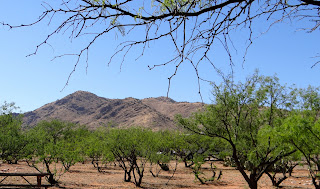 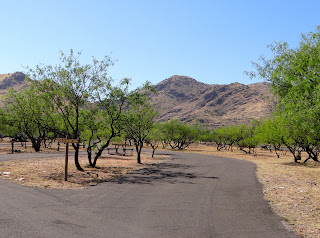 Not very busy with RVs at this time of year 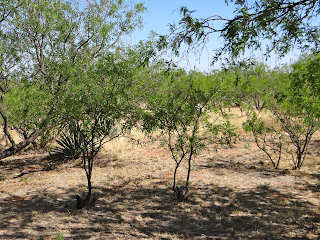 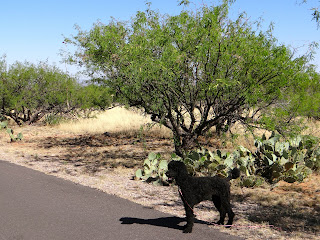 Lacy taking her first walk around.  All State Parks have signs stating that dogs must wear a leash.  But, the signs don't say you have to hold it - so Lacy generally walks with the leash hanging!

When I checked my email this afternoon I'd received two missives from my high school friend, Carol Smith (now has another surname), who is very involved in genealogy and has done a little research on my grandmother, Agnes Kuus (Carol found the spelling 'Kuss' - but who knows how many typographical errors there may be in historical records).  I'm very anxious to reconnect with my wonderful classmates from Notre Dame High School in San Jose and it was wonderful to get her message.  She's living in Florida - I'd love to visit her when I do my sweep of the southeast, which is on my bucket list!