Just came back into my RV after a nice steak dinner that ended a lovely day at Whiskeytown Lake.  As I've mentioned before my son, Jeff, and his family live in Cottonwood, which is about 20 miles south of Redding on I-5.  Whiskeytown Lake is located about 8 miles west of Redding off of CA 299 and is a National Recreation Area.

Many travelers in Mexico this year told me about the US Golden Age Pass and I've been wanting to purchase one but didn't hit any National Parks or Forests, etc. on my return from Mexico.  So, today I purchased my lifetime pass - yippee!  What a great deal - the daily use fee for Whiskeytown is $5.00 and I paid $10 for the lifetime pass.  That's my kind of deal!

Anyway, after a pleasant 40 minute ride I was there - it is really a beautiful part of this beautiful State and Country.  The area is part of the Trinity National Forest, which begins at the northern end of the San Joaquin Valley.  It is included in 'hot country' that I refer to in this blog.  Today it was a lovely 84-88 degrees F, which is about as perfect as perfect can be.  The lake temperature was a little chilly at about 69 degrees, but will warm up considerably in the next few weeks.  There are several self-contained campgrounds and an RV campground with water and electricity, if desired.  We have a kind of family tradition of camping (RVs, tents, trailers, etc. in the group) in various parts of the Trinity Alps every Summer - usually Jeff's family and that of my nephew, Gregg, do the camping bit several times each year between May and November.  Winter is short - there is rarely any snow - maybe a dusting every 2-3 years, but nothing lasting longer than a day or two.  And, it starts getting pretty warm early in the Spring.

Jeff's family bought a new boat (new for them) last year; this was my first outing with them.  Last Summer I was still in Guatemala.  Malia and Samantha, at 13, are really becoming quite proficient tubing and wake-boarding.  Today they took a friend with them and then we met up with the family of one of their school friends; so, I didn't try tubing - but plan to give it a go sometime soon.  When my kids were growing up we had various boats and we water-skiied a lot.  Everybody in the family is a good to excellent swimmer, so water included outings and vacations are plentiful. 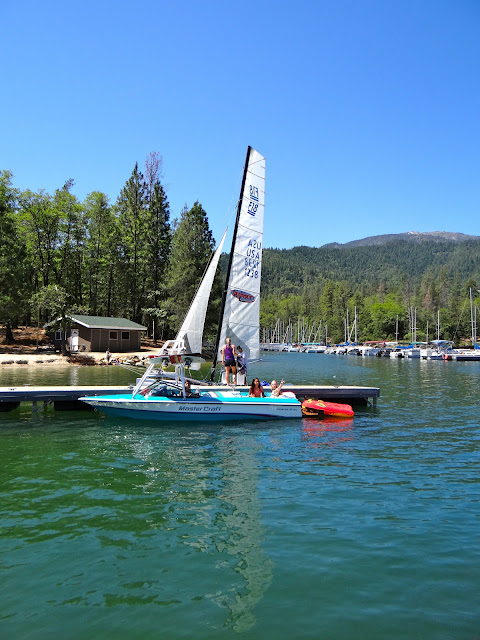 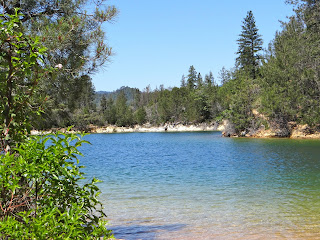 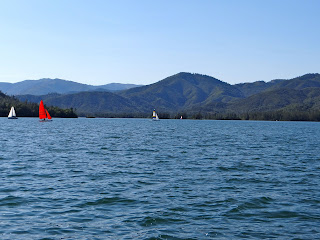 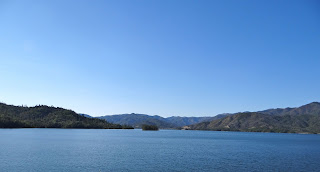 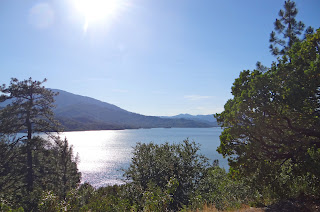 Then, on the drive home, I noticed Mount Lassen.  It's located to the east and has snow all year.  Sometimes, on really hot days, it helps to just look at Mount Lassen and Mount Shasta, both of which are visible from almost anywhere around here. 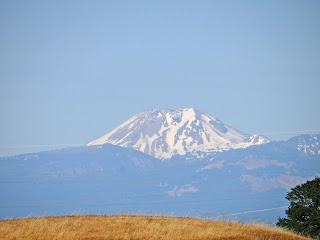 Also, when I got close to home I decided to take a picture of one group of bee-hives near Jeff's house.  I didn't know what the little 'chimneys' were - I was told there for water as this particular area doesn't have an all year water source nearby 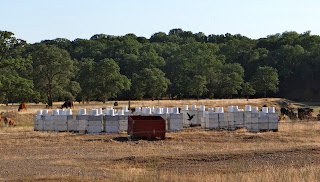 These hives are new.  The beekeeper here has had bees for many many years - but was very badly affected by that mysterious problem of a couple of years ago.  For about two years there were no hives but there back now.  There's just something so wonderful about bee-hives.  I'm fascinated with them.  Gregg (my nephew) and his wife, Claudia, live in the foothills west of Redding in Igo Ono and have about 15 acres.  They shared today that they're going to start bee-hiving on their property.  I look forward to learning more about it.