I wasn't aware that the time had changed until I turned my computer on this AM.  Arizona is, I think, the only State - in the West, at least - that doesn't observe Daylight Savings Time; so, I'm now on the same time as California (Pacific Daylight Savings Time) - but only at this time of year.

This is yet another beautiful morning in the desert.  I feel like I repeat this almost every day of this adventure.  So much of Mexico and the southern US are desert - it's fun to compare climates, dryness, winds, sunrises and sunsets.  I'm also reminded often of the fortitude of those pioneers traveling from East to West across this Continent.  What adventure!  What danger!  What satisfaction!  What sorrow!
What pain!  What exhilaration!

I also have really brought into my thought process of world exploration and discovery all the beneficial and detrimental effects modernization has had on the indigenous peoples of the World.  Here in the southwestern desert country I'm very conscious of the great American Indian Nations that existed for thousands of years before the onslaught of European civilization on these North and South American Continents.  I am descendant from Northern European ancestry.  My lineage is responsible for much of what has occurred in the conquest and development of this part of the World.  I am proud of much that's been accomplished.  I am ashamed of much harm that has been done.

Our culture, civilization, history, politics, religion, ethnicity, etc. are so complicated.  At times, I yearn for a simpler way.

Early this afternoon I have a reservation to tour one of the Kartchner Caverns.  I understand that cameras aren't allowed on the tour but I hope I'll be able later to adequately describe the wonders I'm sure I'll see.....

3:00  Returned from the tour about an hour ago.  I'm sad that they didn't allow any cameras as the caverns are so impressive.  But, it excited me to brush up (or learn for the first time) on my geology.  There's evidence here of 'life' from 13 million years ago.  The caverns actually started as a sink hole that is still visible at the ground level.  It's the passage through which bats enter the caves, etc.  The is an underground 'sea' that's only about 30 feet below ground level that's actually an oozing mud sea.  As water seeps into the rock below this 'sea,' and travels through to the open cave areas it picks up minerals and eventually forms stalactites that 'hang' from the ceilings of the caves.  Then, as the water / mineral flow drips to the cave floor it forms stalagmites.  And, in the case of "Kubla Khan," the only named formation in Kartchner Caverns, the stalactites and stalagmites have come together over the millennia. 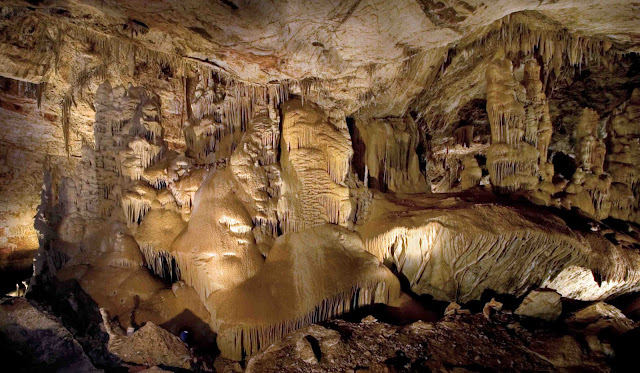 The large 'column' in the center is named Kubla Khan - the photo shows about one third of its height of 58 feet - from the floor to the ceiling of the cave.
Kartchner Caverns are warm caves - the temperature and humidity do not vary.  Throughout the year the temperature underground in the caves is 72 degrees Fahrenheit and the humidity is 99%.


The caves were originally 'discovered' by two 20-year old students at University of Arizona, Randy Tufts and Gary Tenen, in 1974.  The story of how they kept their discovery 'secret' for 14 years is very interesting.  Here's a link to their description of the history of the discovery and the development of Kartchner Caverns State Park.