3:45PM
Arrived at India Wells RV Park in Indio this afternoon.  What a nice park.  There's grass around each RV pull-through spot ($29.70 - full hook up).  I'd started to make a reservation last evening but when the guy from Shadow Hills RV Park called me back, he said one night would be $50!  I said I thought that was very high for off-season and he responded that it's still high season!  Well, they're the only place I've talked with that thinks that.  I decided to just drive here and take my chances and see what happened at the first place I stopped!!!

It was an easy drive after I got out of the Phoenix area.  Unfortunately, there was a terrible accident on I-10 West right after I got on - and no possibility of getting off.  The accident included one car completely turned over (yikes) and one car that went off the exit / entrance ramp.  So I was stuck there, going about 1 mile in 30 minutes.  Prayers for the victims of the accident.  After the glitch, it was smooth going.  Unleaded gas in Phoenix area was $3.19 - 3.39 / gallon.  I had to stop at a Mobil station in California - it was $4.14 / gallon.  But when I got here to Indio I bought more for tomorrow and it was $3.54.  California gas prices!!! 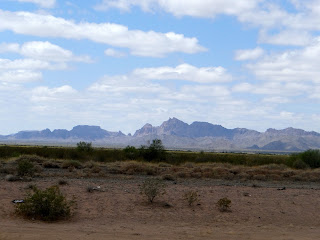 Arizona driving west on I-10 towards California

"California, here I come
Right back where I started from...."
My dad sang that song during the entire trip we drove from the East coast to California in 1947
and
I still remember it....... 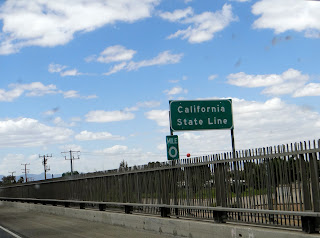 Sometimes one needs to leave the place he loves most to appreciate it - I'm home for now! 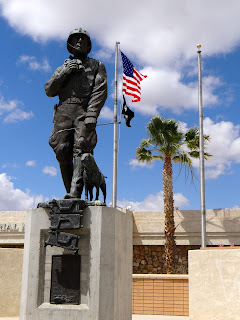 This is the statue that greets visitors to the General George S. Patton Memorial Museum in Chiriaco Summit, California - 30 miles east of Indio on I-10.  It was erected in tribute to General Paton on the site of the entrance of Camp Young, part of the Desert Training Center in World War II.  I didn't go into the museum but on the grounds there are a large collection of tanks used in WWII and the Korean War.  Patton didn't spend much time at Camp Young, but his establishment of the training grounds directly impacted more than one million troops.
Patton is depicted with his dog, Willie (for William the Conquerer), a Bull Terrier, who became famous as Patton's faithful friend throughout the last part of WWII.  Patton was known as an animal lover all his life; and had several Bull Terriers throughout his life. 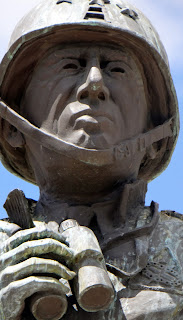 I've always been interested in the fact that these two military men, although fighting desperately against one another - also held each other in high esteem for his prowess.  I think I'm about ready to read
"Patton and Rommel:  Men of War in the Twentieth Century," by Dennis Showalter