More Mesa with Betsy .... and memories of a talented daughter!

Tried to talk with George this morning but our calls kept being dropped - will try again later.  Also called Kari to see how she did in the triathlon yesterday - she'll call me back.  So, at this point I don't know nothin' about nobody!!!

Oh, she just called - and of course, is so busy she couldn't talk much but it sounds like she did well and will call me back later to give me details.  Kari is my "SUPER WOMAN" daughter who was never really interested in sports and / or traditional exercise as a kid; but, after birthing triplets 13 years ago, found that she loved swimming daily laps in their health center pool.  [This was to get exercise, and, maybe more importantly to her sanity, she realized that nobody could talk to her - there was such quiet serenity - while she was swimming - noise and confusion are ever present in the life of a triplet mom].

Well, she started swimming a few laps a day, gradually increasing to maybe 45 minutes or an hour of straight swimming.  She was regaining a level of fitness both physically and mentally.  Then, David bought her a bicycle, as he thought that would be another way for her to get off by herself or with friends and exercise.  Well, my daughter, whose choice of exercise had been cheerleading (nothing wrong with that) found that, not only did she enjoy swimming and biking, but she has incredible endurance and loves just about every minute of it.  Well, fast forward a few years .... In August of 2009 she completed her first Ironman in Louisville, Kentucky ..... with more than 20 members of her family and friends cheering her on.  I'll never forget the excitement and wonder I personally felt when she crossed the finish line (I believe it was in under 15 hours) at about 9:45 that evening.  She was crying tears of joy and self-fulfillment as were all of her supporters.

I remember I asked, "Kari, how do you feel?" through my tears of pride; her response was, "Oh, I'm a little tired but I feel great!"  Incredible!!!  She didn't have any untoward effects of that long day of WORK - no blisters, blackened toenails that are very common after so much footwork, or even really sore muscles.  She's a natural!

Now, four years after that first go, she's done all kinds of endurance events - including the Markleeville Death Ride  http://www.deathride.com/.  She owns Epic Tri Club http://www.epictri.com/ in El Dorado Hills, California and is currently, among other things, searching for young athlete to become an Olympian triathlon contender.

I couldn't be more proud of her as an athlete - but that doesn't compare to the esteem I hold her in as a woman, a wife, a mother and a member of the community. 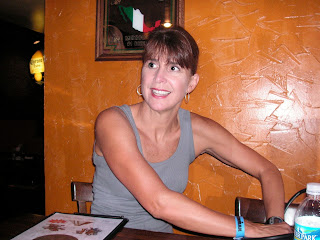 This is Kari the day before the Ironman in Louisville 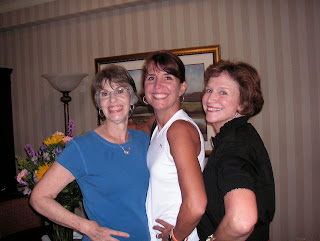 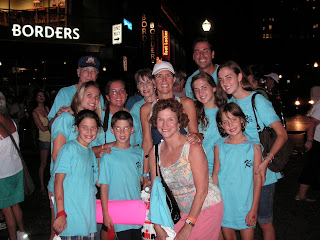 And here's part of the cheering section with Kari right after she finished.  I didn't mention earlier that the triplets were her 4th, 5th and 6th children!!!!  Mother of six - what an accomplishment!

4:00PM
Betsy (Kari's mom-in-law) just brought me 'home' to the RV park after having taken me to lunch with some of her school teacher buddies - all of whom have now retired and meet once a month for lunch.  I enjoyed putting faces with the stories I've heard about some of them throughout the years.

Now it's time to get organized to take off tomorrow morning for Indio where I'll spend the night tomorrow and then head on to Playa del Rey for the weekend festivities.  After all the shopping with Betsy I feel like I have some decent choices of what to wear to the various graduation functions.  My RV wardrobe is a little lacking in appropriate attire for a university graduation ceremony and parties.  And, thank you God, I am losing a little of the 20 pounds I've put on in the two years; so, it's nice to look at pants that aren't in the "two ton Tilly department."

Also, it's really a treat to go into an American department store - it'd been quite a while.