Dinner with the Church's and Renate ....

I spent lots of time today working on this blog; I guess it sounds like it should be really professionally written with all the references to time spent working on it.  Well, it’s just that I have to interrupt work over and over again – to chat with folks, relax, read my book, walk the dog, use my new hand vacuum, etc.  Oh, it’s a busy life!

However, Mike and Terri Church had invited Renate and I to go to what they described as,  “A hole in the wall taco place that’s supposed to have the best tacos in town.”  Several people had recommended the restaurant, Tacos Don Felix, to them and they’d taken a look at the outdoor portion of it on a recent walk in that area.  I can’t begin to describe how to get there; we took a cab and seemed to drive all over narrow and windy streets.  Like so many restaurants and private homes in Latin America, you really don’t have any idea from the street view what the interior might be like. 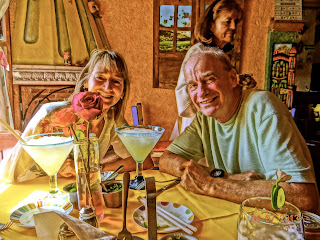 Our wonderful new friends, Terri and Mike Church with Renate in the background.

The late afternoon sun was shining in the window - but really the color is because I had my camera on the incorrect setting!

Drinks are two for one every Sunday so Renate, Terri and Mike each ordered a Marguerita - you can see the size of the serving in the pic of the Churches above.  I ordered an O'Doul's Amber .... 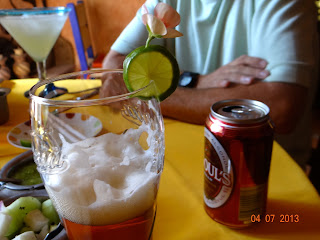 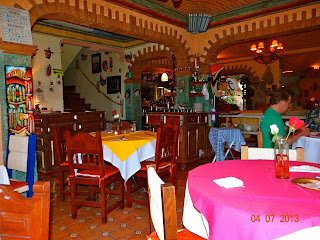 Here's a shot of part of the indoor area taken from our table.  It is an absolutely beautiful restaurant and the wait staff was so attentive and friendly.  I think this is a definite must for my next visit to SMdA.


I'm so happy to have met my new friends - what an adventure - and what fun!

In my newness to blogging I can't figure out how to insert a post between two already published posts; so, I'm adding a little post for yesterday........

Saturday April 6, 2013
Thursday I spent most of the day entering past journal entries into my blog.  Because I’m still unfamiliar with the formatting, etc, the going was slow.  My new friend, George Lehrer, has been helping me, via email questions and answers several times a day.

Yesterday Renate and I went on a trolley tour of San Miguel for about an hour and a half.  It was definitely a valuable introduction to the history, historical figures, art and architecture of this beautiful city.  We filed into a modern trolley car for a drive with two or three stops around the central historical portion of the city with a moment by moment description of the sights and important historical information regarding this beautiful place founded in 1541(!) and named after Michael, the Archangel, with the later addition of the “de Allende” in honor of Ignacio Allende, who was born here, a very important figure in the history of Mexico, especially during the War of Independence from Spanish rule in the early 19th century.

The tour was conducted in Spanish.  I’m sure there’re others conducted in English but I was excited to be ‘forced’ to listen intently to the clearly enunciated Spanish of our guide, Jesu.  His monologue was lively and interactive and I think I actually understood about 90% of it!  And, maybe more importantly, it encouraged me to do some more online investigation regarding the long and interesting history of this country.  Once again, I’m reminded that the United States is only an infant with regard to the history of the World.  There is actually physical evidence of culture here from 13,000 years ago!

I love coming back to my little house each evening and sending myself off into the world of the Internet to learn more about all the things I've experienced during the day..... It's lots more pleasant than memorizing dates, people and places in a high school history class!