Friday, April 5, 2013
Thursday I spent most of the day entering past journal entries into my blog.  Because I’m still unfamiliar with the formatting, etc, the going was slow.  My new friend, George Lehrer, has been answering my questions several times a day via email.  Thank you, George.

Yesterday afternoon Renate and I went on a trolley tour of San Miguel.  We bought tickets for the tour at the Transía office near the central plaza ($65 pesos); then had time to enjoy a nice lunch in a little indoor/outdoor restaurant nearby.  Interestingly, there were several young German tourists eating there at the same time.  Renate didn’t want to talk with them, saying, “Germans are everywhere!”  It’s also been my experience that Germans love to travel and do so all over the world.

The hour and a half guided tour was definitely a valuable introduction to the history, historical figures, art and architecture of this beautiful city.  We filed into a modern trolley car for a drive, including two or three photo op stops, around the central historical portion of the city with a moment by moment description of the sights and important historical information regarding this beautiful ciudad founded in 1541(!) and named after Michael, the Archangel, with the later addition of the “de Allende” in honor of Ignacio Allende, who was born here and was a very important figure in the history of Mexico, especially during the War of Independence from Spanish rule in the early 19th century.

The tour was conducted in Spanish.  I’m sure there are also any number conducted in English, but I was excited to be ‘forced’ to listen intently to the clearly enunciated Spanish of our guide, Jesu.  His monologue was lively and interactive and I think I actually understood about 90% of it!  And, maybe more importantly, it encouraged me to go ‘home’ and do some more online investigation regarding the long and interesting history of this country.  Once again, I’m reminded that the United States of America is an infant with regard to the history of the World.  There is actually physical and archeological evidence of culture here in Mexico dating from 13,000 years ago! 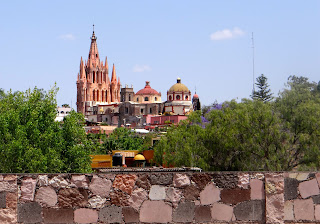 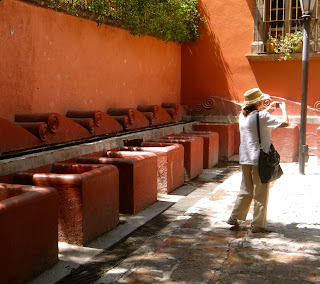 Where the public laundry is located now, the story goes that wild dogs led the Indians to
discover a source of water; so they named this are Izquinapan, "place of dogs".  Then in 1542 Fray Juan de San Miguel founded the city and called it San Miguel el Grande.  The name was changed in 1826 to its present name, in honor of  native born Ignacio Allende:
San Miguel de Allende 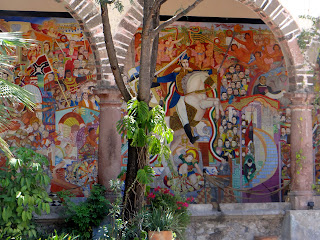 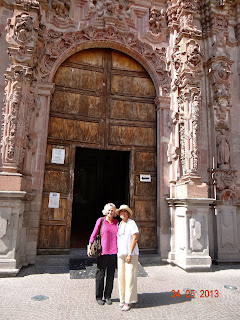 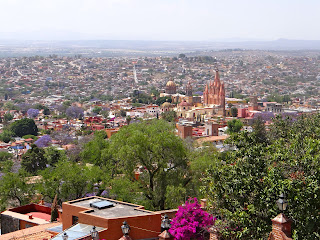 View looking down on the city 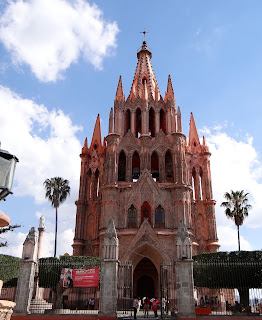 Front of La Parroquia San Miguel Arcángel
Posted by mps2343 at 11:39 AM