My birthday – or the anniversary of that day in San Francisco 70 years ago – Feb 3, 1943.  World War II was raging.  I wish I’d paid more attention to my dad’s stories about the War.  I know he was home in SF for my birth but I don’t really remember all the details of how long he was with us.  I know Jim was conceived when I was 9 months old and I know Dad wasn’t with us when Jim was born on August 2, 1944.

But for that day in 1943 in SF.  Mom told me she’d experienced a long labor, after a long pregnancy – I was overdue, not sure how much.  But, as I’ve learned in my nursing life, due dates weren’t so dependable in ‘those’ days.  I question how overdue I was as we know now that overdue babies tend to ‘lose’ weight – and I weighed in at a whopping 8 pounds 12 ounces – and 21and 1/2 inches long.

Mom and Dad were also celebrating their 9th anniversary on that day.  They had married in Plattsburg, NY on a very cold February night – 40 degrees below zero I was told.  Mom was almost 26 years old and dad was almost 29.  He was stationed at the Plattsburg Army base and Mom worked in the Post Exchange.

Let’s see – a little background -   Dad, Leo Francis Ryan, was the fourth child, and only son of Agnes (née Kuus) and James Francis Ryan.  Grandpa was 100% Irish, born in Meriden, Connecticut – as was Dad.  I’m working on Ancestry.com to try to find out more about my paternal grandfather’s family.  Grandpa, as I recall, was a slightly built gentleman with thick snowy white hair.  He was quick to smile, liked his beer and really fun to play with.  Grandma Ryan was a stern regulated lady who always looked put-together – her long long long gray hair braided and wrapped around her head.  I loved to watch her put her hair together in the morning and also brush it out at night.  She joined Mom in encouraging me to brush my hair 100 strokes every night before going to bed.  I think I did – most of the time.  I was in awe of Grandma when she came to ‘visit’ us in Campbell – 771 Winchester Road – when I was about 8.  She was a German lady of about 78 or 79 years, always neat and clean looking with ‘old lady shoes’ that were polished and well taken care of, always wore a dress and stockings, had long long gray hair that she braided and wound around the perimeter of her head.  It waved from her forehead back to the nape of her neck and from there it was braided and wrapped around her head.  I remember she used hairpins, not bobby pins but it was very difficult to see them in her hair / braid, as they were gray in color and well hidden.  I don’t recall ever seeing a hair out of place.  She took the train from Meriden by herself; that must have been quite an adventure for her – crossing the Continent ‘alone.’  I remember that she stayed with us, in Campbell, so long that my Grandpa decided to come out about 6 months after she arrived.  For both arrivals we drove to the Oakland train station for their arrivals.  When Grandpa was expected his train was either late – or we got to Oakland very early, I don’t remember which.  But I do remember that, to pass the time, we went to a movie, “Born Yesterday” with Judy Holliday.  I seem to remember that the reason for her ‘visit’ was because  Dad had re-enlisted and was stationed at the San Francisco Presideo.  Although I loved having my grandparents with us, I suspect Grandma caused much trepidation for Mom, somewhat similarly to her angst dealing with Dad too.  The Germanic “Achtung” way of living life appeared to be a bit unnatural for Mom.  She spent her whole married life essentially following other people's orders – my Dad, my Grandma, etc.  And, I opine that she tended to a morsel of ‘passive aggression’ where she’d always seem to have a streak on one glass after the dishes were done.  Or, another example would be my dad’s story (true?  I don’t know!) about Mom’s hat being on backwards when they attended a reception for General Douglas MacArthur at the White House in about 1947, I think.  That’s another story – first babysitter for Jim and me……

Celebrated this 70th BD with Barb and Fred and campers from Canada and the US with this beautiful BD cake Fred and Barb bought at Soriana: 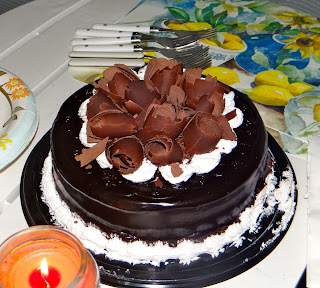 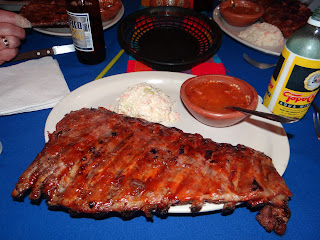 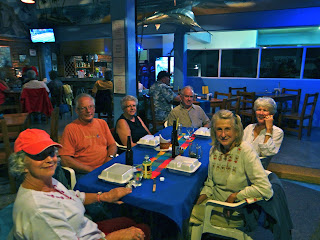