We are spending three wonderfully relaxing days in San Antonio - the weather is a little chilly for this time of year, I'm told.  It's in the 70-80 degree range during the day.  And, it's even sprinkled a couple of times - for only a few moments at a time.

Renate and I took the city bus into the downtown area.  She was anxious to visit The Alamo, which I had toured on my first trip here.  So, I decided to go to IMAX to watch a dramatization of the battle between Texas and Mexico - that resulted in the slaughter of all 100 Texas defenders of The Alamo at the hands of Mexican General Antonio López de Santa Anna in 13 days in 1836.

But, on the afternoon of April 21st of that year, the 'Texian' army attacked Santa Anna's camp; they were taken by surprise and the "Battle of San Jacinto" was essentially over in 18 minutes during which time many of the Texans shouted as they attacked, "Remember the Alamo."  Santa Anna was captured the following day and General Sam Houston forced him to order his troops out of Texas, ending Mexican control of the province of Texas and giving some legitimacy to the new republic.

Renate's visit to the Alamo didn't happen because it was closed for preparation for Fiesta activities.  I did see the IMAX movie and enjoyed having my history knowledge refreshed.  We met a little later and found a place where we could watch one of the highlights of Fiesta - a parade of nautical floats in the San Antonio River.  The tickets had been sold out but we found seating inside a mall restaurant dining area.  My pix are not very good - taken through glass - but the experience was fun and we met lots of nice people - tourists and natives. 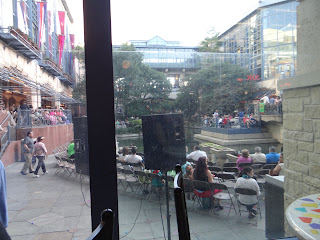 Waiting for floating parade to start 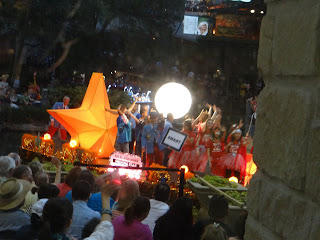 Lots of floats with kids from local grammar, middle and high schools 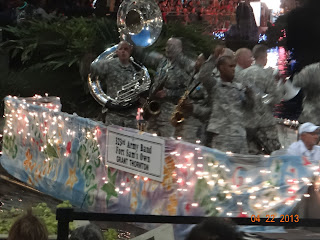 And lots of military represented