4/19/13
Arrived in Saltillo at La Fuente Hotel and RV Park yesterday afternoon after an easy drive from Matehuala.   It was all on Mex57 Cuota - but I only paid about $15 dollars in cuota so it was well worth it not to have to go into all the little towns with their speed bumps.

This hotel is not really outfitted for RV camping for any length of time.  We have electricity and can, if necessary, move our RVs to add more non-potable water.  Other than that, we´re boon-docking.  We are parked on pavement  that is nice for no dust/dirt blowing inside.  When we arrived yesterday it was probably in the 90s; today we´d be lucky if it hits 70!  I  have on a sweatsuit.
This afternoon we´re going to take a city bus into the central historical district of the city (population about 700,000)  to visit a Serape  Museum.  The serape is the colorful poncho-type coverup worn all over Mexico for hundreds of years.  I bought one many years ago to use as a tablecloth and I´ve always loved it.  If I can find some that are reasonably priced I´d love to use them for reupolstering in the RV - wow would that be colorful and cheery!

I´m using the hotel (Spanish keyboard) very old  computer -  very difficult to touch type.  So, I´ll just have to blog more tomorrow, maybe after I get back in the States......

This afternoon Renate and I took a city bus from the hotel into the central area of Saltillo; we wanted to visit the Serape Museum.  We weren’t exactly sure where it was located so we exited the bus where the bus driver suggested.  Once on the very crowded sidewalk it seemed that nobody could tell us where the museum was so we stopped a cab and decided to have him take us.  It was only about four or five blocks from where we were - but we could have walked around in circles for who knows how long.

The museum offered free admission and although it's not large, our visit was very interesting.  A young lady at the entrance explained how to use the laminated information cards for each exhibit - they were written in Spanish and English.  The museum consisted of three or four rooms with very nicely arranged exhibits and interesting slide shows depicting how serapes are worn, traditional costumes including serapes and also some interesting history of women's fashion that coordinates with the men's wear including the serape.

The serape is a knee-length garment made of two identical blankets sewn together at one edge except for a central, head-size slit. It is worn hanging from the shoulders, or folded over one shoulder. The serape was originally made of cotton and ixtle, a maguey (Agave) fiber, with traditional indigenous designs by pre-Colombian indians of what is now all of Latin America.  The material, type of weaving and design identified hometown, family and / or social status. The name "serape" originated at center of production in Saltillo, Coahuila. In different parts of Mexico and Guatemala, the garment has different names. 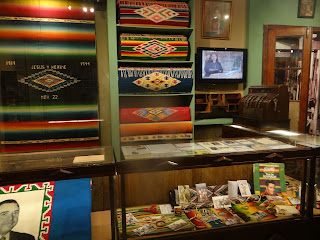 This is the museum store.  I wanted to buy a book about serapes, but the only offering in English was too expensive! 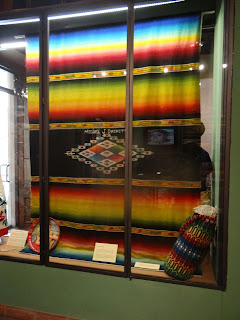 The designs, colors, materials, etc. are indicative of different regions of Mexico and Latin America.
The Maya still do much of the hand weaving; although they are certainly not the only indigenous group to wear them.  They were also worn by Spaniard Conquistadors and later by every echelon of Latin American society. 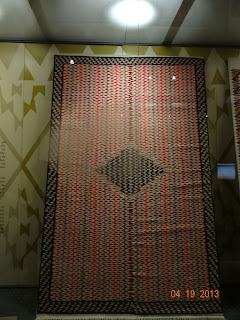 Most of these examples are made of 100% wool.  Modern machine-made serapes can be woven by machine of almost any natural and / or synthetic thread / yarn. 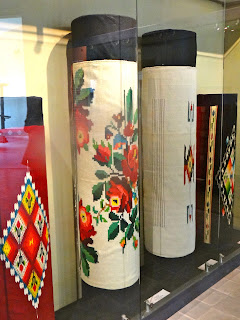 I found the flowered pattern one that I'd never seen before.  In a way it reminds me of the flowered shawl / scarf worn by certain groups of Indian Muslims in the 'Kutch' area of India, near the Pakistan border. 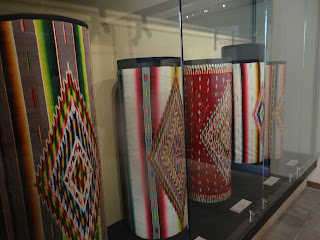 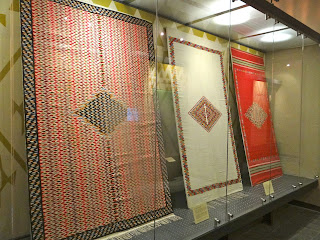 And more ....  In some it's difficult to see the slit in the middle of the center seam, placed so that the serape can be worn as a poncho - over the head.

After completing our museum visit, we wanted to see the Saltillo cathedral, which, like most city cathedrals is located facing a central plaza / park; in this case the cathedral, which was built between 1745 and 1800 is located in the Colonial section of the city.  It is an historical and beautiful central area to this bustling city. 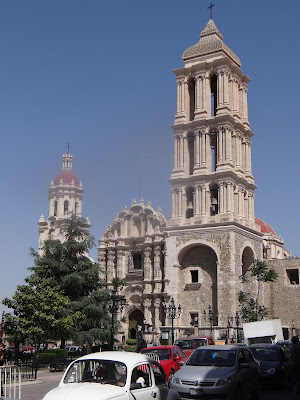 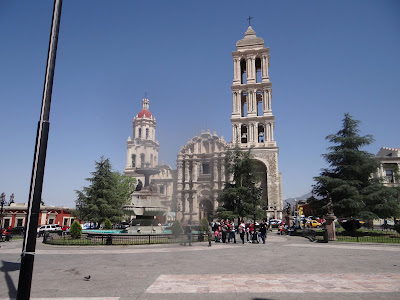 Unfortunately, if you notice a smudge in the center of the photo - it is a smudge on my camera lens.  I kept thinking my eyesight was on its way out! 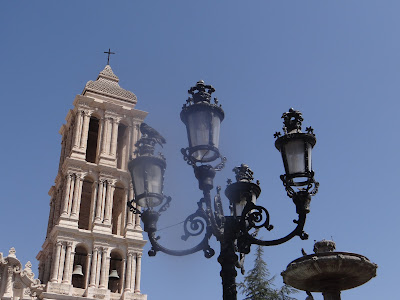 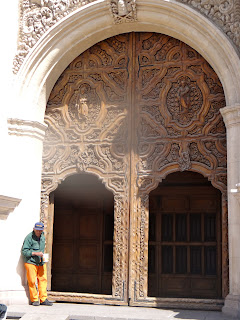 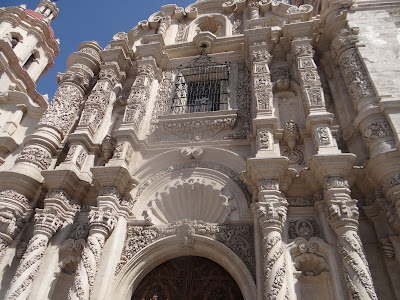 And, take a look at the stone work on the facade 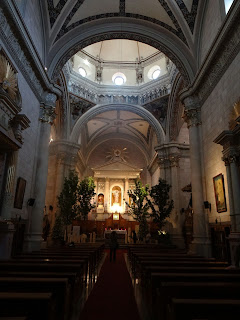 I walked through snapping, without flash, the gorgeous interior 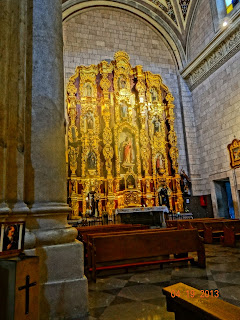 A chapel off to one side of the main church 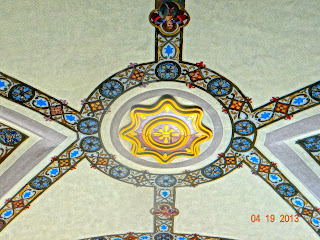 As Renate and I walked through the Cathedral a custodian, who was sweeping up close to the main altar, asked me if I spoke Spanish.  "Yes," said I.  He said he'd like to take us on a tour of the choir and bell towers.  Renate didn't want to climb all the way to the highest bell tower; but I decided to give it a try.  Boy, a closed in, steep-stepped, circular staircase that just kept going higher and higher.  I'm never as worried about going up as I am with coming down.  I'm so happy I went on the adventure.  The following pix are taken from various different heights .... 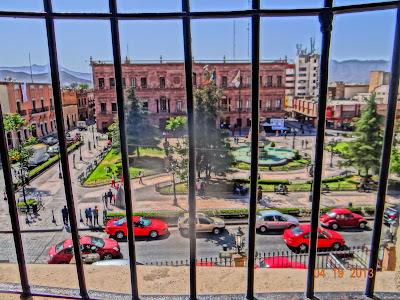 Besides smudges I have no idea what setting I had the camera on; but this is a shot of the central plaza / park from one of the lower bell towers.  The building is the background is the Palace - seat of Hispanic government in Colonial times - not the city government building 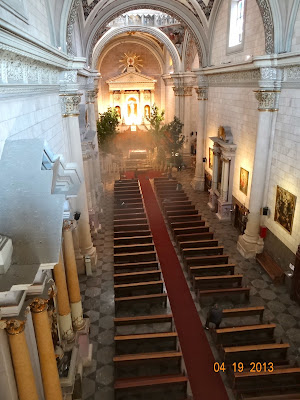 Looking down from the choir loft 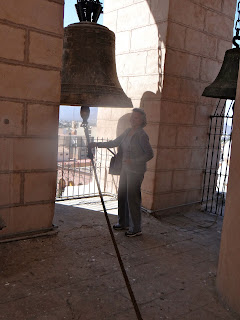 The young man offered to take my picture - in case I have to prove that I actually did climb up there! 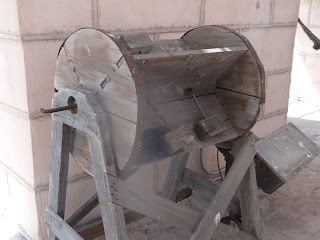 This is a special wooden clapper - used only during Semana Santa.  It produces an eerie and ominous sound - to go along with the Passion of Christ 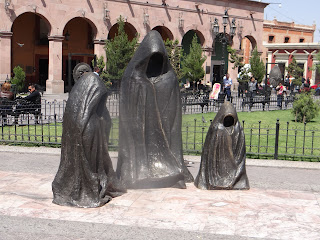 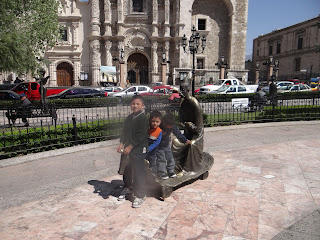 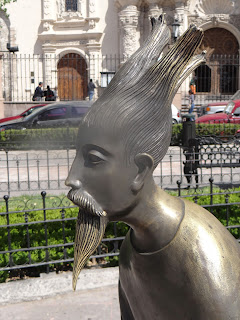 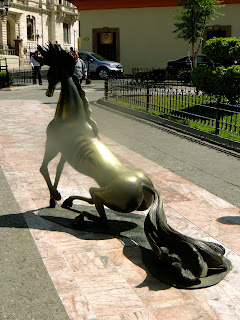 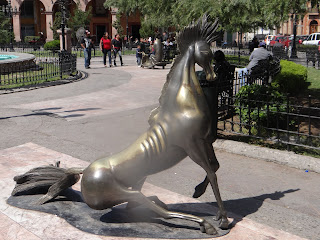 Another angle of the same horse sculpture 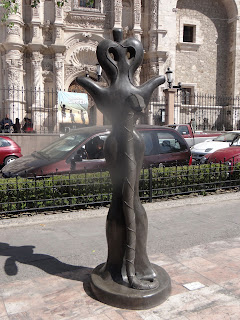 A female human form and a serpent 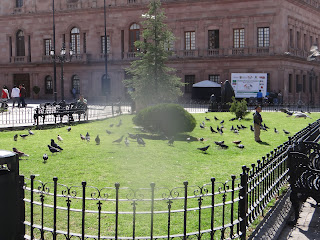 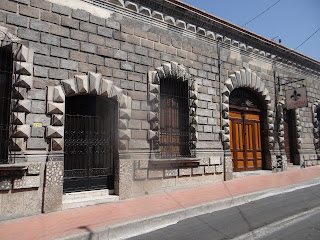 This lovely stone-work building is now a bar.  The precision cutting of the stone is incredible.  This building is located a couple of blocks from the central plaza 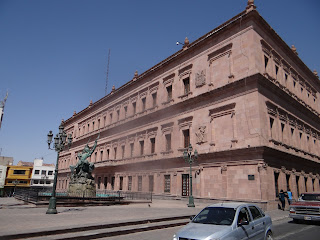 Another government building with a different, but also beautiful, stone-work

Saltillo, Coahuilo, Mexico was not a destination but simply a stopover place for our trip North to the border.  I'm so happy I had an opportunity to be introduced to this rich and historic city in Mexico