This morning the 'laundry man' came by to pick up my dirty laundry and returned it, washed, dried, folded and wrapped in cellophane at about 5:30.  Boy, that's a hard day of laundry, just like when I had three little kids, a husband with dress shirts, two dogs and two cats.......

I haven't mentioned that I have become well acquainted with Brenda and Wayne Ulian from Vancouver, BC.  They bought a beautiful Navion Class C motor home in November and this is their maiden trip.  They've been neighbors here in SMdA who, along with Jerry and Ann Rockwood, were scheduled to leave for the trip home on Saturday.  As they were pulling out Wayne was unable to shift gears in his rig so they pulled back in and have spent the last two days trying to figure out what's wrong.  The Navion has a Mercedes Benz diesel engine; nobody here knows much about repairing them.  Wayne has had some issues with Mexican 'diesel' fuel; he doesn't trust it.  Anyway, they have a mechanic here today and are deciding when they'll be able to safely make the about 600 mile drive to Laredo, Texas, the shortest distance to cross the border into the US where they hope to get specialized help.

As of now they're planning to head out tomorrow.

I took another walk through town today and love this beautiful city.  One errand was that Lincoln had accidentally broken my coffee carafe so I needed to replace it.  terri told me about an 'appliance' store about three blocks from here.  I should have taken a picture .... one small store (about 200 square feet) sells household appliances like coffee pots, blenders, irons, stoves, washing machines, TVs, computers, phones, motorcycles and scooters and I don't know what else .... maybe houses and cars!

Renate and I have such a nice relationship building.  We visit and occasionally do things together, but also do a lot individually.  I visited the vet today with Eleanor who has had some kind of an irritation inside her mouth.  I tried to take her to the vet in Valle de Juarez but he doesn't care for cats!  That's not uncommon in Latin America; cats are just not valued as much as I value mine.

The woman vet examined her and determined that she, indeed, has peridontitis, an inflammation of the gums, throat and tonsils - it's an autoimmune disease that may require more intervention in the future.  Today she gave Eleanor cortisone and antibiotic injections and I think she's already feeling much better this evening.  I'll have her checked again at my vet when I get home to see if she needs more treatment. Hopefully her immune system will be able to handle future inflammation if necessary. 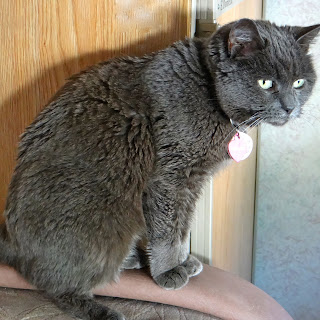 Eleanor is a very serious kitty and spends many hours sitting just next to the refrigerator, just in case!
Posted by mps2343 at 1:04 PM